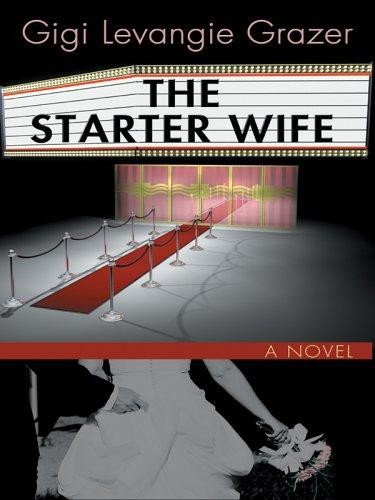 “In
The Starter Wife,
with delirious aplomb, nerves of Sub Zero steel, and a mordant case of the giggles, Gigi Levangie Grazer covers a very expensive waterfront: that gated colony inhabited by the great EWs:
Entertainment Weekly,
Edith Wharton, and Evelyn Waugh.”

“Acidic and unforgiving, Gigi Levangie Grazer’s hilariously accurate skewering of the mores—and the morons—of Hollywood left a deliciously vile taste in my mouth, and I loved it!”

—Simon Doonan, columnist for
The New York Observer
and author of
Nasty

“[Grazer] gets
Maneater
right. The reader can savor this book’s silliness while appreciating its cleverness equally well.”

“One of those gobble-up-in-one-sitting reads, perfect for summer.”

“You’ll eat up this funny look at an obsession with a Hollywood hunk.”

“A hip, clever story that will have you laughing from the gut. Grazer does a marvelous job depicting vibrant Beverly Hills socialites while simultaneously poking fun at their shallow habits and quirky vernacular.”

“Deliciously cynical, from the triple-cheek-air-kiss school.”

“A scathing satire of L.A. society (to use the term loosely)… . Grazer gives Clarissa just enough intelligence and spark to make her shameless antics deliciously entertaining.”

—Helen Fielding, author of
Olivia Joules and the Overactive Imagination

“This is a very entertaining and lively book—but women aren’t really like that, right?”

—Steve Martin, author of
The Pleasure of My Company

“Grazer has a secret weapon: her preternatural acid powers of observation…. Her eye for detail—and her refusal ever to make Clarissa lovable, or even likable—make
Maneater
a hypnotic read.”

“Grazer … never loses sight of the hilariously self-centered, devilish core of her creation’s personality…. Clarissa is one for the ages.”

This book is a work of fiction. Names, characters, places and incidents are products of the author’s imagination or are used fictitiously.Any resemblance to actual events or locales or persons, living or dead, is entirely coincidental.

Originally published in hardcover in 2005 by Simon & Schuster, Inc.

DOWNTOWN PRESS and colophon are trademarks of Simon & Schuster, Inc.

This book is a work of satirical fiction. The characters, conversations, and events in the novel are the product of my imagination, and no resemblance to any actual conduct of real-life persons, or to actual events, is intended. For the sake of verisimilitude, certain public figures are briefly referred to or make appearances in the novel, but their descriptions, actions, and words are wholly fictitious and are not intended to be understood as descriptions of real or actual events, or to reflect in any way upon the actual conduct or character of these public figures.

Thank you to the team: David Rosenthal, Marysue Rucci, Jennifer Rudolph-Walsh, Sylvie Rabineau, Stephanie Davis, Tara Parsons, Kerri Kolen, Victoria Meyer, Michael Selleck, Aileen Boyle, Louise Burke, Katie Finch, Lynn Goldberg, and Megan Underwood. I’d also like to thank that very nice man at FedEx. Thanks for all the support from my friends, Julie Jaffe, Leslee Newman, and Julia Sorkin. Now you can read the rest of the book. Thanks to Michael Smith for obvious reasons (you’d have to know him). Thank you to my family, my three sisters, Julie Levangie Purcell, Mimi Levangie, and Suzy Levangie Kurtz. Thank you to my mother, Phillipa Brown, who has sent me cartoons about the particular pitfalls of having raised a writer. It’s a good thing she was a good mother. Thank you to my father, Frank Levangie, who looks like Paul Newman and is momentarily single. Thank you to my two step-teenagers, Riley and Sage Grazer, and my two little boys, Thomas and Patrick, for giving me so much joy and so little tsuris.

“S
HE LOOKS TERRIBLE.
Oh my God. The girl’s got skunk hair.”

“She’s falling apart … hold up, is that a smile on her face? Look at those lines! Calling Doctor Botox! Calling Nurse Restylane!”

“She used to be a size four. Call me a liar, but you could sell that butt in Brentwood Park—that back end is lot-size—”

Gracie Pollock found herself standing in a half-moon contour with The Three Blondes, her Jimmy Choo stilettos sinking into damp, pricey Bermuda grass. She listened as she sucked a syrupy liquid with just enough alcohol through a straw; just enough alcohol to ward off the mental lucidity that would entice her to run for her life.

It was a fortieth birthday party for a friend. Well, not a friend,
exactly, more like an acquaintance. The Wife Of … who was she the wife of, again? Anyway, seemed easy enough. An endless lawn filled with the ultimate in well-groomed wives. Rumors of a midday concert by Cyndi Lauper singing, what else—“Girls Just Want to Have Fun.” Gracie thought it might even be something these gatherings rarely were: a good time. Until she pulled up in her Volvo SUV, walked along the side of the Seussian Italianate mansion (cursing her choice of footwear as she slid into the muck with each step), and saw who was there.

Mean girls. The meanest of the mean in L.A.—every single woman who had nothing good to say about anybody was in attendance. There were no smiles; there were only sneers. Each one of these Evil Barbies could cut you with a look, lacerate you with one word, disembowel your confidence with a flick of their hair extensions.

And somehow, she’d found herself standing with The Three Blondes. Otherwise known as The Three Meanest Bitches in Town—Don’t Even Think of Crossing Them.

They were something out of a warped fairy tale. One was short and ferocious—Gracie thought she resembled a pig with eyebrows; one was a bit taller, with an expansive bosom (they’re hers; she bought them) and stick legs (ditto, above); the third loomed over the others, one feature larger than the next. Her man-hands could easily carry a sub-Saharan continent plus her ten-year collection of Birkin bags.

And they liked her. They liked Gracie, which didn’t please her so much as strike terror in her soul. Where had she gone wrong? she wondered as they gathered around her like the parasitic flies that hang on cattle.

Their object of derision was the latest victim in a series of divorces that had rocked the West L.A. basin like a 6.2 earthquake.

Resurrecting Charlie's Girl by Kayn, Debra
Ruff Way to Go by Leslie O'kane
The Girl You Lost: A gripping psychological thriller by Kathryn Croft
Fly on the Wall: How One Girl Saw Everything by Lockhart, E.
Highlander Brawn by Knight, Eliza
The Geek Gets The Girl by Michele Hauf
Back To Us by Roman, Teresa
The Calum by Xio Axelrod
Strangers and Shadows by John Kowalsky
Hideaway by Dean Koontz