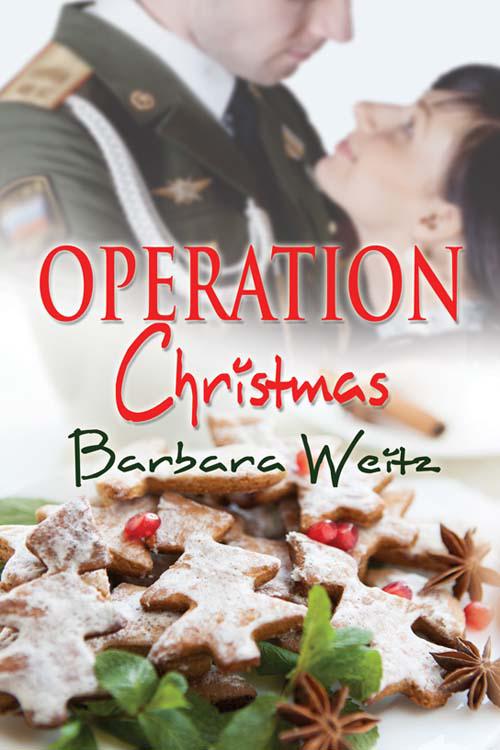 Praise for Books by Barbara Weitz

Praise for Books by Barbara Weitz

“I thoroughly enjoyed this story. The hero and heroine were well-matched and had great chemistry...The romantic tension that is woven through the book doesn’t disappoint. I fell in love with them immediately and enjoyed the twists and turns leading to a great ending.”

TEED UP FOR LOVE

“A witty story full of fun but it also addresses plenty of serious issues in a delightful way that brings out emotions but isn’t too heavy. The supporting cast of characters is as well developed as the lead couple and enhanced the story. If you are looking for the perfect summer read full of personality and humor, this is definitely the one to pick up and enjoy lounging in the sun.”

“Barbara Weitz has a delightfully sophisticated writing style that conveys wit and humor without the slapstick.
Teed Up for Love
is a great read.”

the military men and women who sacrifice so much

to serve and protect this beautiful country of ours.

Sometimes a story latches onto your heart and demands it be written. This is such a story. It’s impossible not to be aware of the large number of young injured vets coming back into mainstream life. We, the public, see their bravery and smiles as they rehabilitate in the media, but what happens when the cameras stop rolling? A difficult subject to tackle as a romance writer, and not typical, but one I felt compelled to write.

I’ve taken the liberty to imagine the trials of a young war widow in denial who comes face-to-face with a physically injured former Marine ready to take a shot at living life to its fullest. Since the world’s troubles can’t be fixed with the wave of a wand, I brought a determined angel into the story bent on convincing this doubting Marine his life is precious no matter what he’s seen or believes.

We all know freedom comes at a great price, even the liberty to write this fictional story, for that I extend my heartfelt gratitude to my editor and publisher for helping me present it to you. And then there’s the bevy of brave widows in my life who show me their strength. This story is about loss and recovery and the ability to embrace the sorrows and the curve balls life throws us with grace and dignity and a smile even if it’s through our tears.

It’s my sincere hope you will fall in love with Jess Grant and Madeleine Belmar as you read their journey to new love and happiness.

Wishing you a blessed and Merry Christmas,

Jess Grant clenched his jaw until it ached. Phantom pain struck at dawn in a Molotov cocktail of hot embers and dry ice cold, making the simplest of tasks monumental. Never sure of the trigger, he blamed December’s bone-chilling air and gray sky dumping wet snow that clogged his windshield wipers.

He put more heat on the windshield and shook his head. If only all things could be fixed this easily. Like everyday life without a lower left arm. Wasn’t that enough of a challenge to body and mind without this—this dealing with something you couldn’t see but sure as hell felt big time.

Thank God this latter phenomenon occurred less frequently these days. Who needed the periodic flashback to the day his arm stayed behind in Afghanistan, leaving him to wonder why the rest of his body earned the right to come home. The answer always came with a glimpse into the unbelievable, and most certainly undeserved, by any measure his mind could grasp.

Being saved by an angel might make a good party story, but he wasn’t about to toss the possibility out there for folks to deem him mentally damaged as well as physically. He lowered the passenger side window to flood the truck with mind-clearing air. It didn’t take long for frigid ozone to knock some sense into his thick skull.

Jess tamped down on the brakes to come to a complete stop. Stuck in the crawl of morning traffic brought on by winter’s first major snowfall, he spotted Belmar Bakery up ahead. About to jump out of his skin, he decided to stop and kill two birds with one stone. He could place his Operation Christmas order and pick up bakery for the office break room.

Jess maneuvered into a parking spot across from the bakery and got out of his truck. Traffic made a steady stream over two lanes of sloppy pavement, creating ridges of brown slush deep enough to cover the thick soles of his boots.

If he didn’t look at the road, he saw a different scene. The old river town in which he’d been raised took on a fresh new look as fat snowflakes shrouded century-old storefronts. Old-fashioned lampposts lined Main Street. Fake green wreaths and advent banners hung from them, letting the daily commuters know they passed through Ferris Bridge, Illinois—don’t blink.

He hunched his shoulders against wet flakes drifting down the neck of his leather jacket, his frozen breath lost in the blinding snow. About to curse the damp cold, the persistent pain, the traffic inching along,
finally
, he saw his chance. He darted through the break in traffic with his eyes riveted on the bakery’s mouthwatering window display. Belmar Bakery represented home and yearly birthday cakes, it a fixture in town since his childhood.

The familiar jingle of the small bell above the bakery door brought with it warm homey aromas. Usually the family matriarch Grams Belmar greeted him with steady brown eyes and a grim mouth. Her white halo of hair gave the impression of a rocking chair grandma, but he knew different. Beyond a sales pitch of the day’s special, she appeared stern yet knew exactly what he wanted without a lot of chatter. Broad grins filled with “yes, ma’am” or “no, ma’am” would make the corners of her mouth curl against her will. At the rate they were going, he figured it would be spring before they got friendly enough for him to ask about her granddaughter, Madeleine.

Today, Grams was nowhere in sight as Madeleine’s mother greeted him with a head nod. Janet, if his memory served him right. She made her way toward him. He could see some resemblance between mother and daughter but had to admit Madeleine favored her father more.

They chatted easily as he placed his order. He almost made a casual inquiry about her daughter, when she braced herself against the counter with her pen caught between sturdy fingers and sighed. “Imagine. Our cookies traveling all the way to Afghanistan to brighten some soldier’s Christmas. Goodness that warms my heart.” She placed her hand against her chest with a steady pat. Jess understood all too well the emotions behind her sad eyes in remembrance of her son-in-law killed in the war. Any questions about Madeleine would have to wait.

Customers gathered and milled in the store and hurried Jess’s business to a close. He tucked his fingers under the twine wound heavily around two white bakery boxes. At the door, he jumped back and made a quick arch to allow the distracted woman rushing in to dip beneath his prosthetic arm and avoid a collision.

She ducked her head, jostling the long dark curls that cascaded around her shoulders and over the knit pink scarf wound around her neck. Her breath swooshed into her lungs with a gasp. “Oh, my gosh. So sorry.” Her light brown eyes flashed with apology. “My fault. I wasn’t watching where I was going. Sorry.”

“No harm done. I didn’t drop these.” He lifted the boxes.

And it was over.

Not what he hoped. Off to tell her mom some good news, she hurried past without seeming to hear his comment or notice his best sexy grin let alone recognize him. But he remembered her. Remembered being sorry she remained attached at the hip to Danny all through high school.

Good thing she didn’t take notice. He’d let his eyes appreciate her fair skin and rosy cheeks stung by frigid air moments too long, too blatant. What did he expect? That she’d recognize him, talk, and want to hook up? Right!

Again at the curb, he waited with his thoughts. She hadn’t changed a bit other than being more beautiful as an adult than a teenager. How strange Danny’s death in Iraq occurred around the same time as his ambush in Afghanistan. Shame, really. Widowed at what? Twenty-six, seeing as he turned twenty-eight over the summer.

Pain crushed deep inside Jess’s chest and squeezed around his heart. An injured war vet would be the last kind of guy she would date. He would be a constant reminder of what she lost. Maybe even resent he survived and Danny didn’t. He shivered and not from the cold.

Impatient with the endless traffic, he dared the car speeding his way to slow down.
Honk!
He jerked back, his arm swung out and the car’s front fender caught hold of the bakery boxes, ripping them from his fingers. Cold, dirty road slush drenched his pant legs with splatter from the knees down as the car rolled over the boxes. The driver didn’t even seem to notice other than hitting his horn.

Talk about a bad day! No desire to do anything other than go to work, he darted between the cars.

By the time he jumped inside his truck and jammed the key into the ignition, the phantom returned. Or his realization it never left. A dark sinking swirl at the pit of his stomach made him feel useless and angry.
Damn the war
and all the baggage he still lugged around. Some of his bigger-than-life personality remained buried in a foreign country he’d just as soon forget about in detail. Leaving him to wonder why he’d made it out alive and not the rest of his team?

The question haunted him.

He dialed Tamara. The only person in his support group he shared anything personal. Special Ops Army and minus a leg, she was much tougher than he in lots of ways. She’d give him grief, but at the moment, he needed the wakeup call to forget the guy who about plowed him over rather than slow down. Although, he had to admit, forgetting the ruined bakery would be a lot harder. He’d been set for a piece of stollen with his morning coffee.

Yet something else burned a bigger hole in his gut. Why couldn’t he let it go? What good would come of any of it?

“She didn’t recognize me.”

“Uh-huh. Hang on a sec. Need to feed Puddy Kat. Can’t think with him rumblin’ in my ear.”

Jess heard the monster black cat making his demands and squeezed his foot down on the brake for a stoplight.
She didn’t recognize me. Damn. Why not? He’d been senior Homecoming King for crying out loud.