Read The Sultan and the Queen: The Untold Story of Elizabeth and Islam Online

The Sultan and the Queen: The Untold Story of Elizabeth and Islam

BOOK: The Sultan and the Queen: The Untold Story of Elizabeth and Islam
>>DOWNLOAD HERE >>READ ONLINE NOW
ads 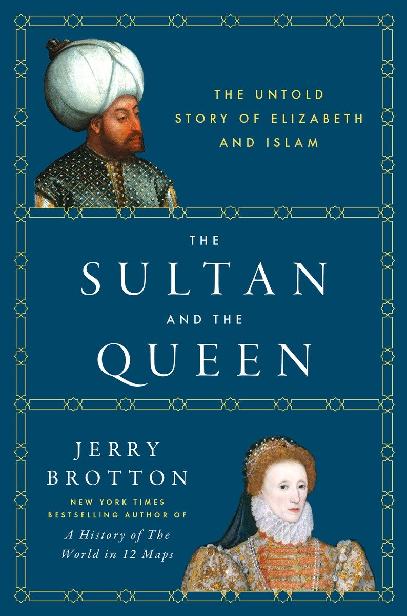 The Sultan and the Queen: The Untold Story of Elizabeth and Islam

Long before Thomas Jefferson confronted the Barbary Pirates, Queen Elizabeth sent a secret message to the Ottoman Sultan Murad II, inviting him to open his markets to her merchants and to embark on a pathbreaking new alliance. Islam and the West crossed paths much earlier than we think—and originally the Muslims had the upper hand.

When Elizabeth was excommunicated by the pope in 1570, she found herself in an awkward predicament. England had always depended on trade. Now its key markets were suddenly closed to her Protestant merchants, while the staunchly Catholic king of Spain vowed to take her throne. In a bold decision with far-reaching consequences, she set her sights on the East. She sent an emissary to the shah of Iran, wooed the king of Morocco, and entered into an unprecedented alliance with the powerful Ottoman Sultan Murad III.

This marked the beginning of an extraordinary alignment with Muslim powers and of economic and political exchanges with the Islamic world of a depth not again experienced until the modern age. By the late 1580s, thousands of English merchants, diplomats, sailors, and privateers were plying their trade from Morocco to Persia. To finance these expeditions, they created the first ever joint stock company, a revolutionary new business model that balanced risk and reward.

Londoners were gripped with a passion for the Orient. Elizabeth became hooked on sugar as new words like
candy
,
turquoise
, and
tulip
entered the English language. Marlowe offered up
Tamburlaine
and Shakespeare wrote
Othello
six months after the first Moroccan ambassador’s visit. Jerry Brotton reveals that Elizabethan England’s relationship with the Muslim world was far more amicable—and far more extensive—than we have ever appreciated as he tells the riveting story of the traders and adventurers who first went East to seek their fortunes.

"An illuminating account of a neglected aspect of Elizabethan England:  its rich, complex, and ambivalent relations with the Muslim world.
The Sultan and the Queen
is a fascinating and timely book."
—Stephen Greenblatt, author of
The Swerve
“An exceptionally rich and brilliant book. In bringing to life Elizabethan England’s ambivalent engagement with Islam, Jerry Brotton shows how profoundly that encounter shaped English trade, diplomacy, and the Islam-obsessed drama of Shakespeare and his contemporaries. The story he tells could not be more timely.”
—James Shapiro, author
The Year of Lear: 1606

“We are accustomed to seeing Elizabeth as a dazzling but essentially limited monarch, obsessed with defending her small corner of northwest Europe. . . But as Brotton shows, for the last quarter of Elizabeth’s reign, England was also deeply engaged with the three great powers of the Islamic world.
The Sultan and the Queen
is both a colorful narrative of that extraordinary time and a reminder that our own fortunes and those of the wider Islamic world have been intertwined for much longer than we might think.”
—Dan Jones, *The Times
*

“Jerry Brotton’s sparkling new book sets out just how extensive and complex England’s relationship with the Arab and Muslim world once was. . . It seems extraordinary that, in a time before mass travel, when most people died a stone’s throw from where they were born, there wer nevertheless those whose adventures led them to the edges of the known world – and to cultures so different from their own as to seem dreamlike. But Brotton’s book is full of them. . . At a time when many see Islam as a recent and strange intruder, Brotton’s excellent history is a reminder that a careful study of England’s “island story” shows just how wrong they are.”
—The Guardian

“A marvelous achievement.”
—The Spectator

“Impressive and highly readable. . . Brotton emphasizes the extent to which Elizabethan England was shot through with influences, stories, individuals and products drawn from the Islamic world. The orient is not elsewhere but already here, both thrillingly and uncomfortably close to home. . . Brotton’s book crackles with an energy that illuminates and vivifies its larger claims.”
—Financial Times

“A little-known story that Brotton chronicles with scholarship, assurance, and not a little charm. . . Someone should get cracking on the screenplay now.”
—
Boyd Tonkin,* The Independent
*

“An exceptionally rich and brilliant book. In bringing to life Elizabethan England’s ambivalent engagement with Islam, Jerry Brotton shows how profoundly that encounter shaped English trade, diplomacy, and the Islam-obsessed drama of Shakespeare and his contemporaries. The story he tells could not be more timely.”
—James Shapiro, author of
The Year of Lear and* A Year in the Life of William Shakespeare

“This fascinating account uncovers the lively exchange between Elizabeth’s England, the Ottoman Empire, and Morocco. Christianity and Islam were still at odds, but Elizabeth gladly sought alliance with Muslim lands against the shared threat of Catholic Europe.”
—Natalie Zemon Davis, author of *The Return of Martin Guerre
*

Jerry Brotton
is a professor of Renaissance studies at Queen Mary University of London. A renowned broadcaster and critic, he is the author of
Global Interests: Renaissance Art Between East and West
(with Lisa Jardine),
The Renaissance Bazaar
,
The Sale of the Late King’s Goods
(short-listed for the Samuel Johnson Prize and the Hessell-Tiltman Prize),
Great Maps
, and
The

New York Times
bestselling, award-winning
A History of the World in Twelve Maps
, which has been translated into eleven languages.

A History of the World in 12 Maps

The Renaissance: A Very Short Introduction

The Sale of the Late King’s Goods: Charles I and His Art Collection

The Renaissance Bazaar: From the Silk Road to Michelangelo 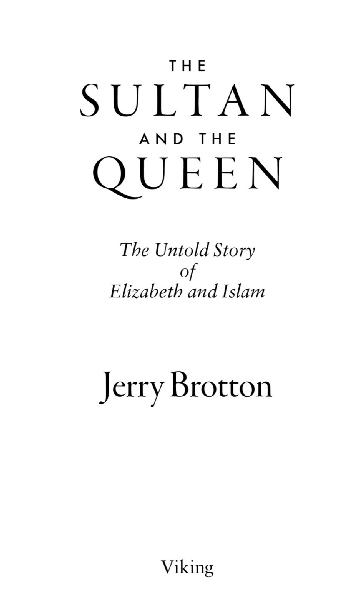 First published in Great Britain as
This Orient Isle: Elizabethan England and the Islamic World
by Allen Lane, an imprint of Penguin Random House UK

Title: The Sultan and the queen: the untold story of Elizabeth and Islam/Jerry Brotton.

To my wife, Charlotte

2
The Sultan, the Tsar and the Shah

3
The Battle for Barbary

4
An Apt Man in Constantinople

9
Escape from the Seraglio 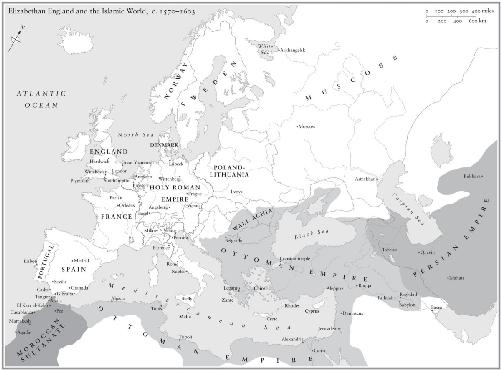 Visit
http://bit.ly/2bRF8pK
for a printable version of this map.