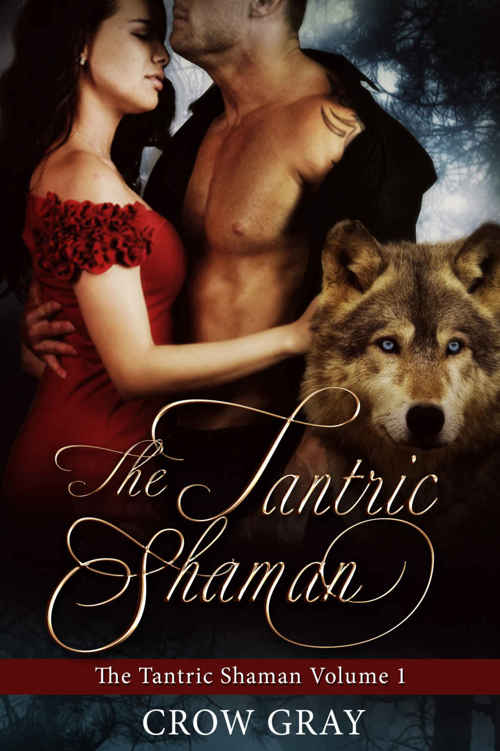 All rights reserved. No part of this work may be reprinted without permission of the

author. Any resemblance to actual people living or dead is entirely coincidental and all characters and situations are fictional.

This book is a work of fiction and fantasy. The characters are mostly of supernatural origin, and therefore, the “normal rules” do not apply to them. However, in real life it is always advisable to practice safe sex.

“Yeah baby, that's what I'm talking about!” Harry yelled as Ingrid danced around the campfire, slowly stripping her clothes off to the loud music.

“Yeah, this is my kinda camping trip,” Jeff said as he watched Ingrid.

“Oh, you're all into Ingrid now?” Jeff's girlfriend Kate said playfully as she pouted.

“You know you're the only one for me, baby,” Jeff said, never taking his eyes off of Ingrid as she ripped her top off, exposing her 36DD breasts.

“Oh, hell yes!  Free the puppies!” Harry said, sucking on the joint as he watched his girlfriend gyrate.

“Come on up here and join me,” Ingrid said to Kate, motioning her with a come hither gesture.

“I don't know, Kate said, much more shy by nature than Ingrid.

“Come on, baby, it'll be hot,” Jeff said as Harry passed him the joint. He took a hit and passed it to Kate. “Live a little.”

Kate took the joint and inhaled, then smiled up at Ingrid. The marijuana had taken away the last of her inhibitions, so she reached up and squeezed Ingrid's breasts, much to the delight of the two men watching.

Jeff was mesmerized by the sight, watching as his sexy girlfriend made out with another girl in front of him. The fact it was his best's friend's girl, and he was watching as well, would normally have bothered him. But the drugs and alcohol made it all moot, and he was just enjoying the moment.

The girls began to go at it hot and heavy, Ingrid pulling Kate's top off and exposing her smaller but firmer breasts. Harry and Jeff felt their jaws drop as they watched the girls rub their hard nipples together, their tongues intertwined.

Jeff watched as something bounded from the woods and just like that the girls were gone. Harry was in a stupor, and the girls had been gone a few seconds before he even noticed.

“What the fuck?” Harry asked, as both he and Jeff stood up and looked for the girls. “What the fuck was that? WHAT THE FUCK WAS THAT?”

“I don't know!” Jeff said, and suddenly the two men felt a warmth mist over them.

“What the hell? Is it raining?” Harry asked before the two noticed the dark red color of the liquid.

Harry was knocked to the ground when something struck him in the face, breaking his nose. He reached up to cradle his gushing nostrils when he saw it was Ingrid's severed head that had struck him.

Jeff was still standing as various arms and legs smacked into him. He opened his mouth to scream, but the scream never came as the same something that had taken the girls bounded into the firelight and took him.

Harry did have time to scream before he heard a growl, and then heard nothing ever again.

Sam and Gigi walked into the noisy, crowded bar and almost choked on the smoke. Most establishments in the area had banned smoking indoors years ago, but out here on the edge of civilization some places still allowed it. The pair’s acute sense of smell was tested by the strong scent of tobacco, and they both found their eyes watering.

The two walked over to the bar, trying to acclimate to the barrage of sensation. They were looking for someone, two someones actually, and they wouldn't let a little discomfort stop them. Sam noticed the scent of cannabis mixed with the tobacco and decided this bar must be even more progressive than he'd thought. Not something he'd expected to find here on the Louisiana Bayou, but he'd learned long ago to expect the unexpected.

The two were attracting attention even though they weren't trying. It was hard not to stand out when you looked like Sam and Gigi Swain. Sam was tall and lean, but muscular. His long, dark hair braided halfway down his back, his bushy beard covering the parts of his face his sunglasses didn't. Gigi was only slightly shorter; her legs making up most of her body were fully on display in the short denim mini-skirt she was wearing. Just above her flat, toned stomach were a pair of firm 34DD natural breasts that surgery would never be able to match. Her long blond hair and firm cheekbones only added the cherry on top. The two were hot, and they knew it. At the moment, they had other things on their mind.

Sam decided they were attracting too much attention at the bar, so he led Gigi over to a table in the back. They both sat down, scanning the room and not even attempting to be subtle.

“No. This place has too many smells,” Gigi answered.

“Yeah, and they know it. But they are either here, or we just missed them. I had their scent until we walked in the door.”

“Me, too. But if they're not here, they could be getting further away every second we waste.”

As the two continued searching the crowd, a waitress made her way over. Even considering their important mission, the two found themselves checking her out. She was a stunning redhead, just slightly shorter than Gigi. She was wearing leather shorts and a leather bikini top along with short boots, all in black. She looked the two over, liking what she saw. “Can I get you two anything?” she asked, licking her lips as she looked from one to the other. “And I do mean anything...”

Gigi stared at her openly as Sam examined her from behind his dark glasses. The chemistry the trio felt was undeniable.

“Bring us both a beer, whatever light beer you have on tap is fine,” Sam said, trying to keep his mind on the mission.

“Sure thing.  Two beers coming up. My name's Alice by the way, haven't seen you two around these parts. Hope to see a lot more of you,” Alice said, the look on her face speaking volumes as she walked away, being sure to swing her ass because she knew the two were watching.

“Mind on the mission,” Sam said, although he felt his cock starting to stiffen in his tight jeans.

“I don't sense any of our kind or their kind either,” Sam said.

Alice returned with their beers. “That'll be eight bucks, want me to run a tab?”

Sam felt his mouth water as he looked Alice over. She truly was fuckable, but he wasn't sure why he was having such a reaction to her. He normally could control himself better, but tonight his dick seemed to have control.

Gigi's mouth had gone dry as she stared at Alice's luscious breasts. “A tab will be fine,” she managed to stammer.

The waitress set the beers down and then took a seat at the table right along with them, stretching her legs out and putting them up so they both had a great view. “So what are your names anyway? Are you new in town? Passing through or gonna stay a while?” she asked.

The two were becoming more and more aroused as they examined her nice legs.

“I'm Sam, and that's Gigi. We're just passing through. We're looking for some friends of ours, maybe you've seen them?” Sam said, remembering what they were there for. “Nice looking couple, real young. He's shorter than me but thicker, and she's a real petite thing. Both of 'em are blondes. Bo and Candy, usually riding a Harley together. You seen ‘em?”

Alice looked up like she was thinking. “Bo and Candy, huh. They hot as you two?” she asked.

“They are pretty hot,” Gigi said, smiling, “but I don't about as hot as us. Or as you, for that matter.”