Read The Tessellation Saga. Book Two. 'The One' Online

The Tessellation Saga. Book Two. 'The One' 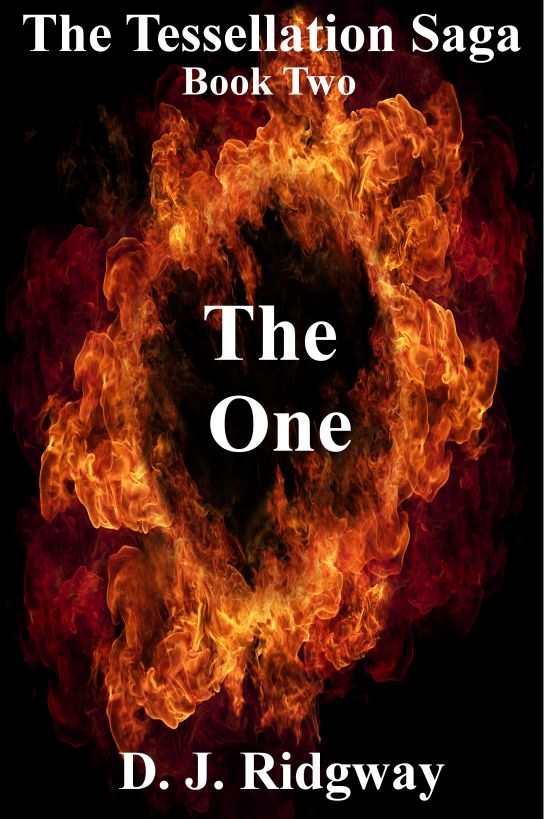 “A super read I
loved this book, a great debut from an undiscovered gem”

“I’m a fiction
fan and this book did it for me from the first chapter.”

Thank you for
downloading this free ebook. Although this is a free book, it
remains the copyrighted property of the author, and may not be
reproduced, scanned, copied and distributed for commercial or
non-commercial purposes without the permission of the author. If
you enjoyed this book, please encourage your friends to download
their own free copy at Smashwords.com. Thank you for respecting the
hard work of this author.

This book is a
work of fiction and any resemblance to persons, living or dead, or
places, events or locales is purely coincidental. The characters
are productions of the author’s imagination and used
fictitiously

For Gillian and
Simon

The
Story so Far…

Chapter 5 - The
Heart of the Piece

Chapter 39 - The Man
in the Mirror

Chapter 40- Into the
Gateway

Excerpt from
MeGath:
Book 3 of ‘The Tessellation
Saga.’

The Story so Far…

A young,
heavily pregnant girl with an arrow lodged firmly in her back flees
through a fierce storm across a dense forest. An age-old wolf leads
Jedadiah Green, a hermit living in the forest to her, she dies but
not before telling the hermit, ‘save my baby.’

Gideon Green
has grown up as a woodsman’s son who wants nothing more than to wed
his fiancée Mayan and stay beside his beloved forest. On the eve of
Mayan and her twin’s eighteenth birthday, Gideon gives them both a
gift, a small gemstone necklace he has made with the help of Sonal,
a family friend and mage. As Gideon cuts the leather ties for Jed’s
stone, he inadvertently cuts his hand and in a moment of madness,
Jed takes the knife and cutting his own hand takes Gideon’s bloody
hand in his, thus sharing their blood and making them blood
brothers.

Jed leaves
shortly after to join the army in Devilly, the capital of Derova
and be a king’s man under King Gath. During a parade, Gath feels
the power in Jed’s shared blood and begins an investigation.

Meanwhile a
captured prisoner from the Bleak, an area of Derova that Gath knows
well is brought before Gath, for questioning. He finds an
intriguing tattoo across the prisoners back and harvests the skin
to hang it in a frame, the prisoner himself, weak and ill escapes
with the help of Lemba, one of the king’s body slaves.

Jed meets and
falls in love with the silent girl and endeavours to find out about
her but after the company receive orders to find the escaped
prisoner, his search for the girl is cut short. After weeks of
searching and in the foulest of weather, Jed collapses on the back
of an old cart. The owner of the cart takes him in and for her own
reasons cannot inform the authorities that she has him. Lying in a
soft warm bed Jed begins to recover and dreams of seeing his friend
Sonal.

Toby Hollins is
also a villager from Green Home and is taken to see Gath for
starting rumours about the image on the coins of the realm, ‘Gids,’
he calls the coins, telling everyone that Gideon Green is the ‘Spit
out o’ the king’s mouth.’ Intrigued, Gath performs a magic spell
using Toby’s blood and memories to see this Gideon Green and at
once realises that Gideon is his son. He wants Gideon back, wants
the power he has harnessed in his blood and he makes Toby a
sergeant giving him an elite corps of troopers with the order to
bring Gideon in. ‘I don’t care what you have to do to get him, but
get him,’ the king says.

Lemba sitting
on some cushions in the room where Gath creates his spell overhears
and realises that the man Toby has been told to find is Jed’s
brother, in shock she accidently knocks over an ornament bringing
Gath’s back attention to her and he gives Lemba to Toby as a gift,
‘after your mission is complete,’ he says. As a reminder of what is
to be his, he pulls a thick swatch of Lemba’s hair from her head
and magically fashions a silver braided necklace that twists and
turns of its own accord in time with Lemba’s own hair when the two
are close together.

After Sonal has
a vision of the brother he thought had lost years ago, he seeks out
Jedadiah in the forest to tell him what has happened. Sonal
explains he ‘saw’ Varen with young Jed and Jedadiah invites him to
accompany the family to Branton, a town three days away from Green
home. From there he says Varen and Gideon can drive on to Devilly
to see young Jed and allay his fears. ‘Gid ‘as not been out o’ the
forest before, he says, ‘p’haps ‘e should see some o’ the world
afore ‘e weds.’ The family leave for the visit to Gideon’s
grandparents but whilst on the journey across the country, Gideon
becomes ill; Sonal looks into the ether and attempts to send a
spell of healing into the young boy but is astonished at the power
he finds within him. He wonders if it is because he is travelling
away from the forest, but forgets his theory as Gideon quickly gets
better when they arrive.

After a final
beating from Gath, Lemba, bruised and bloody escapes with Rhoald
and head toward her sister’s cottage, the same cottage that she
took the escaped prisoner, Varen too. As Jed awakens, he finds
Lemba beside him and he declares his love. He soon realises the
escaped prisoner is also in the house and that he is the brother of
Sonal. Lemba explains using her hands to speak, that Gath is
sending Toby to get Gideon. At first disbelieving and with his
conscience about his oath as a king’s man in his heart, he decides
to go back to the army but still weak he sits on a bench outside a
pub to rest for a moment. Through an open window, he recognises
Toby’s voice and overhears him saying he is now a sergeant. Sick to
his stomach Jed surmises that if that aspect of the tale is true,
then the rest must be too. Worried for his friend and his family,
Jed returns and joins the small band heading toward Green Home.

After
travelling for over a week Toby, with his newly sewn chevrons still
clean upon his arm sits atop his horse at the outskirts of Green
Home Village. Moving to one side he allows his crack troopers to
move before him as they follow the track toward the heart of the
village and his revenge.

The cart rolled
steadily over the cobbles and Jed stared out at the darkness. To
his amazement, they had managed to pass through the Devilly City
Gates without the guards even noticing them, though he had felt
nauseous at the sudden smell of rotting vegetables emanating from
the crate he was sitting on. Rubbing his arms at the distinctive
telltale sign of magic in the itching and crawling of his skin, he
looked across to see if Lemba felt it too but she gave no sign of
feeling the magic as she stared out at the rough taverns,
warehouses and hidden brothels that she knew were on this side of
the city gates. He took her hand instinctively knowing what she was
thinking.

‘Ner love,’ he
said ‘never fer you.’ He squeezed her hand and felt her smile
though she continued to watch the gaudily dressed women and bawdy
men as they cavorted outside the numerous taverns and inns. He
stood up carefully to light a small lamp that swung from a hook
behind the driver’s seat, the soft muted light illuminated the
young girl sitting directly beneath it and dressed once more as the
charcoal burners son. He smiled, even covered in dirt and ashes he
thought her the most beautiful girl he had ever seen, he shook his
head knowing that here is where Hackman would eventually have left
her, if, he had not killed her first. A shout interrupted his
thoughts as two drunken men began fighting, a sad faced whore stood
to one side holding her bloodied cheek, her dress soaked in the ale
that was as plentiful as the water in the river. Lemba trembled
slightly, holding her own cheek in silent sympathy and leant
against Jed’s legs for support, this was where her father had sold
her so long ago,
this or somewhere like this
, she thought.
The whore got smaller and smaller as the cart rumbled on but Lemba
continued to stare as Jed sat down once more and again took her
tiny hand in his. Finally, she turned toward him and buried her
face in his warm shoulder, accepting his arms as they protectively
curled around her.
One day I will be able to explain to him,
she
thought,
one day.

Rhoàld sat the
other side of Lemba and smiled weakly as he felt Jed pull the girl
toward him noticing the smile, Jed smiled in return. He looked
quietly at the frail old man thinking he looked a little different
from the man he had met in the kitchen of Dotty’s home; at that
time, he had thought perhaps the old man had also been ill. Now,
despite the poor light, Jed could see colour in his cheeks that
before had seemed washed-out or pale and his eyes were not quite as
sunken as they had been.

‘My boy do I
look so different from when we first met?’ Rhoàld asked. ‘Do you
not remember me?’

‘Surr,’ Jed
replied, ‘I don’t recall us ever meetin’ afore two days ago, though
I confess I did think yer looked kinda familiar,’ he answered.