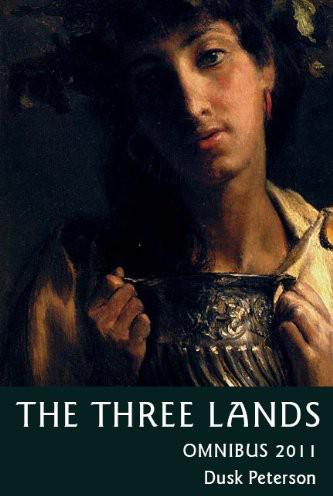 Published by Love in Dark Settings Press in Greenbelt, Maryland, in the United States of America.
This text, or a variation on it, was originally published at duskpeterson.com as part of the series The Three Lands. Copyright (c) 2002-2011 Dusk Peterson. April 2011 edition. Some rights reserved. The text is licensed under a Creative Commons Attribution Noncommercial License (creativecommons.org/licenses/by-nc/3.0). You may freely print, post, e-mail, share, or otherwise distribute the text for noncommercial purposes, provided that you include this paragraph. The author's policies on derivative works and fan works are available online (duskpeterson.com/copyright.htm).
This book is a work of fiction. Names, characters, places, and incidents either are the product of the author's imagination or are used fictitiously.
The Three Lands Omnibus
contains all the current stories in the ongoing Three Lands series. Readers' feedback is welcome and will be taken into account in the preparation of future editions of this e-book.

CONTENTS
===
Law Links
===
Few events are more thrilling in a Koretian boy's life than a blood feud between two villages. Or so Adrian thought.
Torn between affection toward his traditional-minded father and worship of his peace-loving, heretical priest, Adrian finds himself caught between two incompatible visions of his duty to the gods. Then the Jackal God sends Adrian a message that will disrupt his life and send him fleeing from a danger he knows too well.
¶ Novel: 160,000 words.
Law Links
1: God of Vengeance
. "Sometimes I feel that he is as mysterious as the gods, and that he is hiding something of vital importance from me. Something that would transform my life."
Law Links
2: The Sword
. "But what if I were to reverse the picture? What if
I
were to become the jackal and pursue them?"
Law Links
3: God of Mercy
. "I felt a deep stillness enter into me then, one I hadn't felt for many weeks – one I hadn't felt since the last time Fenton and I spoke. I understood."
Law Links
4: The Bird
. "The slaves are a second mystery."
Law Links
5: God of Judgment
. "'Spies don't fight – remember that.'"
Law Links
6: The Balance
. "'You asked whether you could do anything for me; now comes the moment when I must take up your offer.'"

===
Blood Vow
===
He has taken a blood vow to the Jackal God to bring freedom to his land by killing Koretia's greatest enemy. But what will he do when the enemy becomes his friend?
Thrust into exile and pain, young Andrew has no choice but to accept the friendship of the very person he had vowed to kill. When he returns with his friend to his homeland fifteen years later, though, he finds himself in a land of conflicting loyalties . . . where a vengeful god awaits him.
¶ Novel: 120,000 words.
Blood Vow
1: The Gods' Land
. "I had come to tell him, in the cheerful manner boys have, that our world was about to be destroyed."
Blood Vow
2: Land of the Chara
. "'If I were to take him, in three months you would find him thinking and acting like a civilized Emorian. If you know how to discipline a slave, as I do, such transformations are accomplished with ease.'"
Blood Vow
3: The Look of the Chara
. "'You have not been raped or killed or enslaved, or watched as your city was destroyed on the orders of the Chara.'"
Blood Vow
4: Land of the Jackal
. "'I hope that you do not allow this visit to confuse your carefully acquired Emorian sensibilities as to the proper definition of loyalty.'"
Blood Vow
5: The Eyes of the Jackal
. "'The only way in which to bring peace is to find this Koretian rebel-leader and kill him.'"
Blood Vow
6: The God's Land
. "'If you cannot serve me, then you must be my captive.'"

===
Re-creation
===
What can you give a slave who, by law, can own nothing?
A holiday gift story for Dusk Peterson's readers.
¶ Novelette: 17,000 words.
Re-creation
. "He could not leave this room without his father's permission. And he could not imagine going to his father and saying, 'Please let me go gather moss so that my slave can have a proper New Year for once.'"

===
Bard of Pain
===
In the battle-weary lands of the Great Peninsula, only one fate is worse than being taken prisoner by the Lieutenant: being taken prisoner if you
are
the Lieutenant.
As the world's most skilled torturer struggles with his change of fortune, he finds that his fate is intertwined with the destinies of an idealistic army commander, an affectionate prisoner, and a protégé who reveres the Lieutenant's art . . . but is on the wrong side of the conflict.
¶ Novella: 38,000 words.
Bard of Pain
1: The Darkness
. "The beginning of the end for him (or so it seemed at the time) came in the moment that he stepped into the shadow of Capital Mountain and was assaulted by a stranger."
Bard of Pain
2: The Fire
. "He was on fire."

===
Mystery
===
Three days ago he faced death by fire. Now he faces a bigger challenge.
¶ Novella: 27,000 words.
Mystery
. "Prosper, watching the hand fondle the sword-flat, with the blade's killing edge turned toward him, found himself doing battle with no less than three demon-fears."

===
Upcoming fiction
===
Law of Vengeance:
Excerpt
. A preview of the next
Three Lands
novel.

Begun on the first day of September in the 940th year after the giving of the law, by Adrian son of Berenger, from the Village of Mountside in the Land of Koretia.