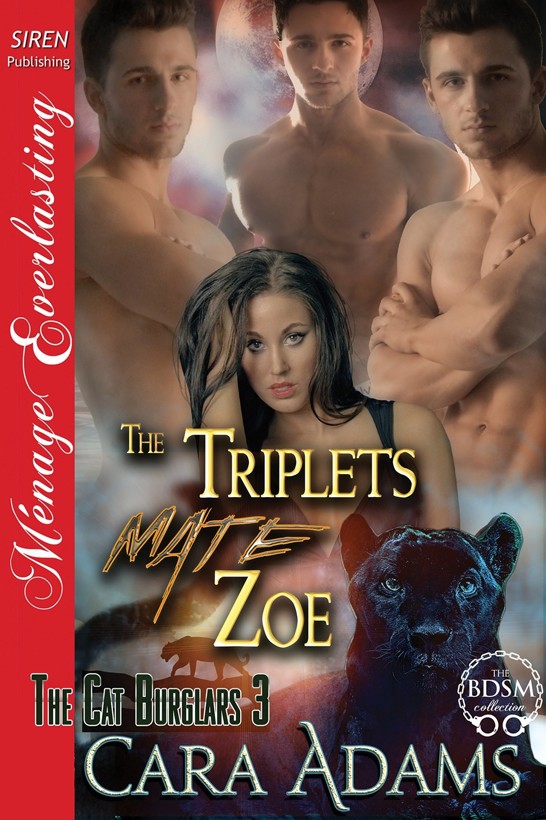 The Reed panther triplets, Vallen, Montague, and Diego, are determined to mate Zoe Crawford. However, she refuses to be just like her sisters, Leah and Maia, with triplet shape-shifter husbands. No matter how handsome and enticing they are, she’s not going to fall in love with them.

There’s just one problem. Getting Zoe to agree is a lot harder than they expected.

All art and logo copyright © 2015 by Siren Publishing, Inc.

If you have purchased this copy of
The Triplets Mate Zoe
by Cara Adams from BookStrand.com or its official distributors, thank you. Also, thank you for not sharing your copy of this book.

This is Cara Adams’s livelihood. It’s fair and simple. Please respect Cara Adams’s right to earn a living from her work.

Vallen Reed paced up and down the parking lot outside the bakery where Zoe would arrive at any minute to collect the day-old bread for the homeless people.

It’d been more than a month since he and his brothers, Montague, and Diego, had first seen Zoe Crawford, and they’d gotten nowhere with her. None of them had received as much as a kiss from her luscious pink lips, much less anything more intimate.

In those four or five weeks, her older sister, Leah, had married the Stewart brothers, and her younger sister, Maia, had become pregnant to the Reilly triplets. He and his brothers were still there at Zoe’s side several days every week, and she scarcely even spoke to them.

Vallen paced faster, aware that if he’d been in his panther form likely his tail would be swishing from side to side with his angry movements. What the fuck was stopping her from dating them? If she’d hated them, it would have been very easy for her to tell them to go away. And they’d have gone, too. Well, gone a little way apart to regroup and figure out how to change her mind. But still. She hadn’t told them to disappear. Or even not to visit so frequently. But she didn’t touch their hands or give any indication at all that she wanted anything more from them than help in running the work among the homeless people.

And personally, if Vallen never scrubbed another cooking pot, it’d suit him fine. He wasn’t washing dishes because he enjoyed it. He was doing it to be near her. And, to be honest, because the people her father, the church pastor, helped were mostly good people fallen on hard times, and Vallen wanted to help them get their lives back on track.

But he wanted to fuck Zoe even more. To kiss her, hold her, fuck her, and tell her how much she meant to him, to his brothers. How much they craved her in their bed. He longed to take her into the dungeon at the panther warehouse and chain her to the ceiling and then paddle her ass until it was fiery red and she was begging him to fuck her.

And so far, in four-five weeks it hadn’t happened, and there was no sign it would ever happen. That had to change, preferably before his blue balls exploded with unfulfilled desire.

Vallen paced around the parking lot some more, breathing deeply and trying to calm his need for her. What he ought to be doing was planning how to get her into the dungeon and then into his arms. Clearly, simply spending time with her wasn’t going to be the catalyst he needed. Yes. It was time for him to hold a council of war with his brothers, and they needed to plan how to convince Zoe to become a hell of a lot more intimate with them. Spending hours and hours every week at her side was never going to work. They needed to get her alone somewhere they could demonstrate how much love they were ready, willing, and able to shower over her if she’d just give them a sign she wanted that. Wanted them.

Just then she drove into the parking lot and stopped beside his car. He knew she’d do that. He’d deliberately parked immediately outside the bakery. The damn trash bags of bread she collected were bulky, not heavy exactly, but unwieldy, and a challenge to fit into the trunk of her compact car.

Zoe climbed out of her car and rested one hand on her hip, shaking her head at him. “Vallen, how often have I told you, Montague, and Diego that I can do this myself? I really don’t need you to supervise me here.”

“I know you’re an extremely competent woman. But I like to be here just in case something goes wrong and you do need help. Besides, it’s much easier getting the trash bags in your car with someone to assist you.”

She simply shook her head and marched inside the store. Vallen was right behind her, his gaze on the delicious sway of her delectable ass. Oh, how he longed to see it naked. To dig his fingers into her soft flesh as he ground his dick into her belly and held her body pressed against his from lips to hips.

The bakery owner fixed his worried gaze on Zoe and spoke the moment she entered his store. “Zoe, I’m glad you’re here. Poor old George in the café got robbed last night. The police came straight away, but the thieves smashed the motor of his big freezer. His freezer won’t be fixed until this afternoon, and the food in it can’t be sold, so it all has to be given away. I told him about you and your father’s work, and he’d like to give you the food, but you’ll have to cook it immediately. I expect some things will have to be thrown away. The freezer was smashed around two this morning.”

Vallen pulled his cell phone out of his pocket and tapped the speed dial for his youngest brother, Diego. He texted,
Bakery now
.

“My brother will be here in five minutes. He’ll help as well. What do you need to do first, Zoe?”

“Maybe if you collect the bread while I go to speak with George? I’m so sorry this has happened to him, but thank you so much for mentioning the church ministry. I’m sure we’ll be able to use the food.”

“No problem at all. I only wish we could help you even more than we do.” The baker’s tall, white chef’s hat bobbed as he nodded to her.

Zoe ducked behind the counter and gave him a hug and then hurried out the door of the bakery.

Vallen wished he was the one getting the hug, but then he hadn’t done anything for her yet. He walked behind the counter and collected the enormous black trash bags filled with day-old bread.

“Thank you very much, both for your generous donations of bread and also for telling the other store owner about John-Paul’s work.”

He lifted the bags over his shoulder and walked back to his car. He had to put them down to get his key out and beep his trunk unlocked and then load them inside. Diego arrived just as he was finishing.

“One of the stores was robbed. We’re picking up more things.”

Vallen shook his head. “We’ll find out everything else from the source. Come on.”

The café was only a few stores farther along. This was only a tiny row of stores, so nothing was very far from anything else.

The front window of the café had been smashed, and it was covered by metal panels labeled in huge black writing with the name of the company who’d boarded the window up. Vallen stood at the doorway.

A woman was sitting on a chair, crying, and Zoe was kneeling on the floor, hugging her.

Vallen looked at the floor. There were fragments of glass and bits of smashed things everywhere. Zoe was going to end up injured, kneeling on the floor like that, but he couldn’t say anything. The other woman was clearly traumatized and needed Zoe right now.

He looked around, and an older man with a pale, woebegone face was leaning on a broom just staring at the mess.

Diego whispered, “He looks like a candidate for a heart attack.” Diego raced forward and gently took the broom from the man. “Come and sit down, and I’ll make you a hot drink.”

The man let himself be led over to a small table surrounded by chairs.

Is It Really Too Much to Ask? by Jeremy Clarkson
Face Time by S. J. Pajonas
Total Victim Theory by Ian Ballard
The Alpine Kindred by Mary Daheim
Skyport Virgo 1 - Refuge by Lolita Lopez
Brida Pact by Leora Gonzales
Circus Summer (Circus of Curiosities Book 1) by Gow, Kailin
His Forever (His #3) by Wildwood, Octavia
Seven Tears into the Sea by Terri Farley
The Backup Boyfriend (The Boyfriend Chronicles) by Jaymes, River