Read The Truth Lies Beneath Your Eyes Online

The Truth Lies Beneath Your Eyes 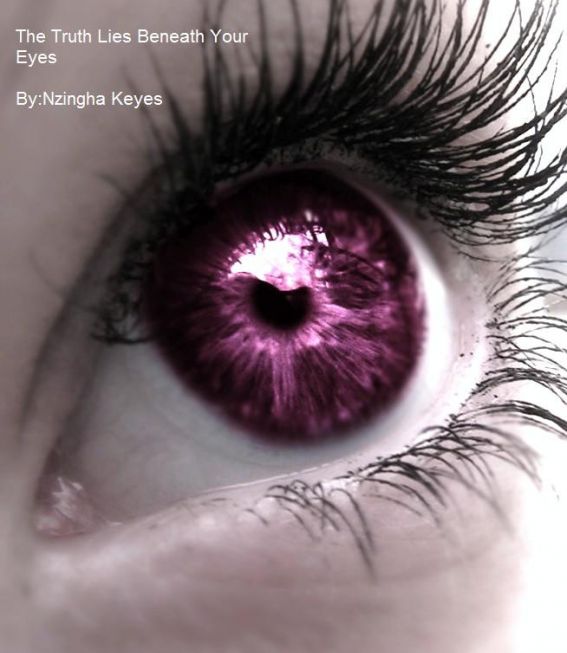 The Truth Lies Beneath Your Eyes

Published by Nzingha Keyes at Smashwords

Thank you for downloading
this free ebook. You are welcome to share it with your friends.
This book may be reproduced, copied and distributed for
non-commercial purposes, provided the book remains in its complete
original form. If you enjoyed this book, please return to
Smashwords.com to discover other works by this author. Thank you
for your support.

“Refrain please, from everywhere and anywhere
and don’t stay near ‘cause I don’t care who you are. Please remove
yourself from in the way of the sunlight, much appreciated,” the
girl said.
Ugh, am I really smart or are people getting
immensely dumber as time passes,
She thought. She turned back,
half snarling as the striped hood that covered her head slipped
back enough to let in a ray of sun in her eyes.

“Dude, move,” she said. He stayed in his
position trying to read the manga novel she had in her hand that
was now closed. “Listen you nosy-ass-fucker, you’re in my light and
now my air space,” she said standing up on the staircase
reluctantly, because she was in absolutely no mood for this guy and
his bullshit.

“Shove it, your ruining my peace,” she said
Jumping down the stairs to go lean on the parked cars. The bell
rang to head inside; she did just that while making sure to shove
passed the asshole she encountered this morning.

“What’s your name kid,” The guy had caught up
to her.

“Wow I thought that you were like twelve, I’m
fourteen as well. I am looking for my uh, tour guide, I’m new
here,” He said. She looked up at him curiously,

“You’re from…Europe, I can hear it. My names
Amethyst,” she said pulling the hood from off her head.

“Precisely, but my mom loved how it sounded
and thus my name,” He said with a smile.

“Well if I’m your tour guide, I’ll need to
see your schedule,” she said.

“Whoa there stranger danger, how do you know
my full name?” She asked suspiciously.

“The world works in mysterious ways,” he
said.

Sitting in her seat she looked at Alias.
No matter how nice he just was he’s still strange,
she
thought. He looked normal, just like any other average teenager.
White t-shirt, dark blue jeans and red and white converse with a
black backpack. He was tan with light brown hair that stopped right
below his ears and had freckles. He had amber colored eyes with
green in them and an AC/DC wristband, whatever.
Like one of
those undercover superheroes,
she thought. She pulled out the
D.N. Angel manga she had been reading before Alias came along. Five
minutes into that she could feel someone standing over her, she
looked at the ground and saw Alias’s converse and then threw the
book in his face. He caught it and laughed.

“You have anger issues, kid” he said flipping
through the book.

“What did I tell you about calling me kid and
you have a lacking of common sense, most people know not to do
that,” She said.

“Go catch the next slow boat to hell,” She
added while snatching the book from his hands.

Math class, math sucks. What dude thought up
this stupid number junk anyways? I wonder if he was trying to draw
a family called ‘the numbers’ and they were in groups. Then his
teacher told him to make a project and he made up math by mistake?
If that’s how it happened Then someone needs to beat the shit out
of him for giving teacher a new reason to assign homework and then
strangle-hey pay attention!!!

“Well Amethyst would you like to tune in long
enough to answer the question?” The math teacher asked.

“Cut it, answer the question,” The teacher
replied.

“I would really rather not,” She said.

“Well then what’s the question at least?”

Oh hell no, that looks like a war between
the green on the chalk board and the chalk,
she thought.

Alias was in all her classes, and that seemed
like it was going to evolve into a problem. She looked up at where
Alias sat, with a strange look on his face.
He looks at people
like…toy soldiers, like it’s all a child’s toy.
She thought.
Trying to figure out the predictability of the people here,
quite strange seeing as you have only just gotten here. School
takes too much attention,
she thought. The day was moving
slowly and besides talking to some people Amethyst was very bored.
Class was tedious and tiresome. Science was fun Algebra was a
battlefield and now it was time for statistics, A hell-zone.
Just as I thought I would be entertained, I end up here, she
thought.
She took as seat on the floor against the wall as
opposed to on a chair.

“Everyone this is our new student Alias
Cardei
,” their teacher said

.
Well isn’t that pointless, what are we
five “everyone say hi to Alias”,
she thought. “Tell us
something about yourself,” the teacher continued.

“No thanks,” Alias said quickly and took his
seat.

“Why might I ask are you sitting on the
floor?” Alias asked.

Amethyst shrugged, “I’ll let you know when it
matters”.

And as the light shines, no lies

Jewels and all the things that shine

So pure you are stuck in my mind

But I am not you

I am not clear

And if you see my mind

You see my fears

Can only hope you turn away

Before the sun burns through me

Word to the wise, you shouldn’t care

That’s what was written in her math book.
Around it was the do now and a definition of something she would
probably see on an upcoming test.
Ich nein habe Achtung fur
Mathe,
She thought. Thoughts in German, the language she was
learning. She thought “

I don’t have attention for math”. She looked
up to see Alias looking down at her.

“Nothing, nothing,” he said looking back at
his paper.

Now it was time for lunch and she didn’t care
much where Alias had run off to. He will probably find

some people to chill with while I chill with
mine.

“What’s the deal with the new kid?” Sunny
said.

“I don’t know but he went from irritating to
cool to irritating in one morning,” She responded, pulling her hood
back up as quickly she stepped out into the sun.
Nicknames that
suited perfectly since the first day we all talked, unknowingly of
course,
she thought.

“Hey Sunny D, what do you want for lunch,”
Amethyst asked jokingly. Sunny smacked her upside the head with a
smile.

“I told you not to call me Sunny D, that
sounds mega homo,” she said.

“And I told you I don’t listen, so were
even,” Amethyst said. Sunny walked inside along with Sparks. “

Moonlight, where is the new kid from?” Kitty
asked.

“I don’t know somewhere in Europe,” She
answered.

“He’s fucking grilling me from across the
street, new kids a stalker,” she answered. Kitty looked over to
where Alias was standing,

“Yeah but a hot stalker.”

“Did you enjoy your lunch?” Alias asked while
standing next to her.

She has a point, he is kind of hot…or it
might just be his accent
, she thought. “Mine was rather
uninteresting, people are of fleeting intelligence…well most,” he
said. “

Most, who are the exceptions?” She asked
while writing in her small notebook.

“So far you, but I don’t know other people
and don’t remember most names,” he said.

“hmm is that right?” she said sounding
slightly interested.

“Yes and your name is interesting where did
it come from?” He asked. She moved her dark brown and highlighted
hair from out of her eyes to reveal purple Amethyst colored eyes
with specks of gold in them,

“that’s how,” she responded moving her hair
back to its original position. He sat there astonished by the color
and well she didn’t care,

“Moonlight, come play soccer with us!” Kitty
and Sunny yelled from the gym floor.

“Later Alias,” she said taking off her hoodie
and climbing off the bleachers.

“I trust you not to go through my backpack,”
she finished as she ran to go play. Gym was for distractions and
energy.

Midnight, it was ten minutes before midnight
and thus ten minutes before Saturday.
Hmm, well my friends don’t
call me moonlight for nothing,
she thought. Sitting comfortably
on her bed still in black jeans and red X games t-shirt that she
had worn to school.
A week off starting tomorrow…cool.
She
heard a tap and the window.

“Ahhh!!! What the hell!!” She yelled. Alias
just flew into her bedroom…through her window. “What the hell are
you!? A fucking ghost!!!” she yelled. “Get the fuck out!!!!” Then
things went dark, there were no words and no sound and Amethyst
didn’t know where she was. Midnight was for dreamers

Who the hell is Lucifer?

“Alexander, get a bottle of water,” Alias
said. Alexander returned with the water and placed it by her
bedside.

“Alias she’s going to wake up and either have
listened and then kicks your ass, or kick your ass and then listen,
were halfway around the world,” Alexander said. Alexander was
correct by any standard, but at the time that didn’t exactly matter
at the moment Alex was being treated as what he was, the little
brother. Short with light brown hair that was wavy and covered his
eyes, Freckles all over his face and lucid blue eyes that could no
lie see right through you. He appeared closer to ten at first
glance and never failed to prove you wrong, with jeans and every
skate team t-shirt possibly owned by one person, he was undeniably
Alexander.

“Shut up Alexander, I know exactly well that
there will be great consequence for my actions but that isn’t the
problem at hand”

“Well when will that be Alias?! When she
awakens to find she has been kidnapped and contacts the Romanian
authorities? Or when she realizes the strength and potential
through rage and annihilates us!!!” Alex was yelling.

For a twelve year old boy you sure are a
wise ass,
he thought quickly. “Why don’t you-”His comment was
cut short.

“Prost!” Christophe said as he left.

Neither protested or said a word to
Christophe as he left. He had jet black hair that stopped at his
collar and at the moment was wavy and moist from the shower he had
just taken. He had eyes the same color as Alias. He only had on his
black jeans and a belt and was holding the shirt he was waiting to
put on. He was sixteen, the oldest and when mom and dad were not
there (which was often), what Christophe said was law. Christophe
had the ability to speak English but when at home he usually chose
not to. Alias didn’t want to admit to it but, both what Alexander
and Christophe said had been correct. He had been impulsive and
caught up in the moment. As far as he was concerned, he was deftly
mistaken and put everything and everyone in danger.

“Where…am…I?” The voice was quiet and careful
and slightly familiar, Amethyst had awoken.

She looked out the window that was at her
bedside and then saw Alias’s reflection in the window.