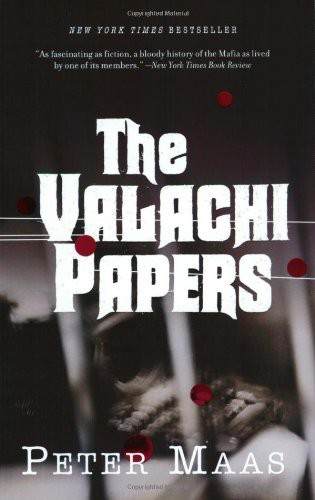 NOTE FROM HRUNDI: IF YOU PROOFREAD THIS BOOK, TRY TO KEEP THE FORMATTING, THE TWO DIFFERENT FONTS ARE NOT ACCIDENTAL

"What Valachi did is beyond measure. Before him we had no concrete evidence that anything like the Cosa Nostra existed. In the past we've heard that so and so was a syndicate man, and that was about all. But Valachi named names. He revealed what the structure was and how it operates. In a word, he showed us the face of the enemy."

"A frightening book because it shows how easily a secret criminal organization can become a spreading cancer in an affluent society like ours."

"Exciting as well as informative, as fascinating as fiction, a bloody history of the Mafia as lived by one of its members."

"Shows that the tabloids' most lurid headlines arc actually rank understatements of actuality.**

a
I do not know how, in a democratic society, the Mafia can be eliminated or controlled, but when you read
The Valachi Papers
you will see that, somehow, it has to be done."

"Well worth reading.... A long, detailed, and specific account of the Cosa Nostra... certain to raise a storm in Washington."

"For those who still dismiss the Cosa Nostra as the fanciful creation of ambitious
D
.A.s and overimaginative hoodlums... there finally emerges the dark outline of a state within a state—a second government."

"Peter Maas has performed a unique national service.
The Valachi Papers
finally confirms what have been up to now only suspicions. This remarkable document lifts the veil on the operations of a crime syndicate that is second in power only to the United States government.
n

"A highly readable narrative of the life and times of Joseph Valachi. ... It is a story littered with bodies and unsolved crimes, betrayals and beatings, oaths, ritual, and revenge."

Prize-winning author
Peter Maas's
books include the phenomenal bestsellers
Underboss
and
The Terrible Hours.
His other acclaimed bestsellers include
Serpico, Father and Son> Manhunt,
and
In a Child's Name.

Father and Son Made in America

Manhunt Marie: A True Story King of the Gypsies Serpico The Rescuer Under boss The Terrible Hours In a Child's Name

A hardcover edition of this book was originally published in 1968 by Putnam.

the valachi papers.
Copyright © 1968 by Peter Maas. All rights reserved. Printed in the United States of America. No part of this book may be used or reproduced in any manner whatsoever without written permission except in the case of brief quotations embodied in critical articles and reviews. For information address HarperCollins Publishers Inc., 10 East 53rd Street, New York, NY 10022.

This is for John Michael

The Valachi Papers
could not in fact have been written without the help and encouragement of a number of concerned individuals, particularly in the Department of Justice and the Federal Bureau of Investigation. Because of the sensitivity of the subject and the controversy surrounding it, I can only express my appreciation to them without singling them out.

Aside from those whose anonymity must be protected, I am especially grateful to Rosamond Dana, Irene DeBenham, Patricia Orr, and Pat Sloatman for their invaluable assistance in preparing and researching the manuscript. Finally my thanks to my editor, Arthur C. Fields, for his expert guidance in seeing the project through.

The Story Behind "The Valachi Papers'

In late June 1964
—nobody can recall the exact date—Joseph Valachi, who in the words of then Attorney General Robert F. Kennedy had provided the "biggest single intelligence breakthrough yet in combating organized crime and racketeering in the United States," was urged by the Department of Justice to write a history of his underworld career.

Valachi was the first person ever to admit belonging to or openly to talk about a huge, tightly knit, secret criminal conspiracy in this country, indeed an entire subculture of evil, popularly known as the Mafia until he revealed its real name, the Cosa Nostra. Valachi had already been interrogated by the Bureau of Narcotics and the Federal Bureau of Investigation and had appeared before a Senate investigating subcommittee chaired by Senator John L. McClellan of Arkansas. Because of his importance, he was now asked to set down on paper his own recollections, since some fragmentary information might turn up that had been overlooked in formal questioning. Usually such personal chronicles are fairly brief, cut-and-dried affairs. But Valachi has an extraordinary and precise sense of recall, and he literally accepted the Justice Department's exhortation that this was the only way he could expiate his criminal past and square his accounts with society. For thirteen months, wearing out a succession of ballpoint pens, he laboriously churned out more than 300,000 words on note pads, telling about his career in the Cosa Nostra. What gradually began to take shape was no mere recital of crimes, but a unique and exhaustive portrayal, virtually day by day over a thirty-year period, of life in the organized underworld. For someone whose schooling had stopped in the seventh grade, it was a monumental task, and to keep Valachi at work, the Justice Department held out the hope to him that when completed, his memoirs might be published, so that everyone finally would be able to see what one law enforcement officer had called "the face of the enemy."

Having originally broken the Valachi story and his revelations • about the existence of the Cosa Nostra in an article in the
Saturday Evening Post,*
I was particularly anxious to see what he had to say. Subsequently, and unofficially, I obtained a copy of his manuscript to judge its potential. It had been typed by Justice Department personnel and totaled a staggering 1,180 pages. I was fascinated by what I found in them. While there have been books in the past about something variously and vaguely called the Mob, the Mafia, or the Syndicate, they have always been produced by outsiders—sociologists, district attorneys, crime re-

*Not that it would have remained under wraps forever. At the time my article appeared, some parts of the story, gathered from her own sources by reporter Miriam Ottenberg, ran in the
Washington Star.

porters, ex-detectives, and so on. Valachi told the story in dispassionate detail for the first time as only an insider can tell it—often brutal, sometimes funny, always real.

Quite apart from the editing that the manuscript would require— Valachi's style made William Faulkner look like a simple subject-and-predicate man—there was another obstacle that stood in the way of its immethate publication: a Bureau of Prisons regulation which barred federal inmates from publishing anything about their crimes. For several months the Justice Department considered waiving this rule, while Valachi sat in his cell waiting for a decision. Finally, in December 1965, Attorney General Nicholas deB. Katzenbach, who had by then succeeded Kennedy, informed Valachi that he had authorized the manuscript's release. I was named, with Valachi's consent, to edit it. I was chosen because I had been the first to request the assignment, and in a "Dear Peter" letter, dated December 22,1965, signed by the Justice Department's Director of Public Information Jack Rosenthal, I was officially notified of my selection.

This letter, in noting that the department's decision was "an exception*' to its policy of not allowing prisoners to publish stories about their criminal careers, was quite specific about the reasons for the exception in Valachi's case:

He did not undertake writing the book for personal or selfish purposes, but at the instance of the Department, for the law enforcement purpose of seeking intelligent information beyond what he had recounted in interviews.

His notoriety is not the result merely of the dramatic nature of his crimes, or career in crime, but is rather the result of his disclosures about the nature of organized crime—disclosures made in public at the instance of the Department and Senator McClellan.

3. It is possible and perhaps likely that law enforcement can be benefitted substantially by publication of the book.

The last paragraph especially reflected the attitude of the Organized Crime and Racketeering Section of the Justice Department. Valachi's televised appearances before a Senate subcommittee headed by Senator McClellan, of which more later, had not gone very well. There was still considerable controversy over whether an organization like the Cosa Nostra really existed. It was hoped that the sheer mass of data provided by Valachi would do much to clear this up, as well as to counteract a great deal of public indifference on the subject. There was also the hope that publication of the book would encourage other informers to come forward.

Arrangements were then made for me to work with Valachi in the District of Columbia Jail, where he was being kept under heavy guard. It was my impression that we would proceed without fanfare, and the book would just come out. I was mistaken. On December 27, to my astonishment, and presumably the Justice Department's, word of the project, and my part in it, was carried in newspapers and on radio and television across the country. I later discovered what had happened. The Justice Department had received a number of inquiries about the possibility of a Valachi book, and Rosenthal, when he wrote to me, also wrote to them about the Attorney General's decision. One of the recipients was the Associated Press, which promptly put the news out.

At the time, however, it did not seem terribly important, and on January 3, 1966, before my first meeting with Valachi, I conferred with William G. Hundley, Chief of the Organized Crime and Racketeering section, and Paul F. McArdle, who was President of the District of Columbia Bar Association and who at the request of the Justice Department had agreed to represent Valachi. We were there in Hundley's office to sign a Memo of Understanding that the department had prepared relative to the editing and publishing of Valachi's raw copy. It incorporated essentially the material in Rosenthal's letter, along with the right to "require the elimination of material the Department deems injurious to law enforcement purposes." I had already been informed verbally that this was in reference to harsh charges of corruption that Valachi had leveled in his manuscript against some members of the Bureau of Prisons and dubious conduct against others in the Bureau of Narcotics—passages the Justice Department obviously did not want in the edited version of the book. In urging me to now sign the agreement, Hundley assured me that these charges were under investigation and said: "Nick [Katzenbach] has to have something in writing to satisfy Narcotics and Alexander [Meryl Alexander, Director of the Bureau of Prisons]. Besides, it's good for you. You get the department's official stamp of approval." Hundley, who has since left the Justice Department, would later tell me, "I never thought they would use it to go back on their word."

Nor did I. Although I already had a copy of the manuscript, and Valachi was on record as desiring me to edit it, I did not simply want to get out any book; Valachi's story was so important, it presented so extensive and detailed a picture of organized crime in America, that I was determined that if it was to be done at all, it had to be done responsibly. While Valachi's text was an extraordinary effort for a man of his limited education, a great deal of clarification was needed that only he could supply, many areas had to be expanded far beyond what he had initially drafted, and considerable rewriting and organization of his material were required. All this needed his cooperation, which only the Justice Department was in a position to grant. I signed.

Jerry Langton Three-Book Bundle by Jerry Langton
With and Without Class by David Fleming
Uncle Tungsten: Memories of a Chemical Boyhood (2001) by Oliver Sacks
The Curse of Jacob Tracy: A Novel by Holly Messinger
Malgudi Days by R. K. Narayan
Neighbours And Rivals by Bridy McAvoy
Heart of Lies by M. L. Malcolm
Blackout by Andrew Cope
Angels by Marian Keyes
Money Run by Jack Heath