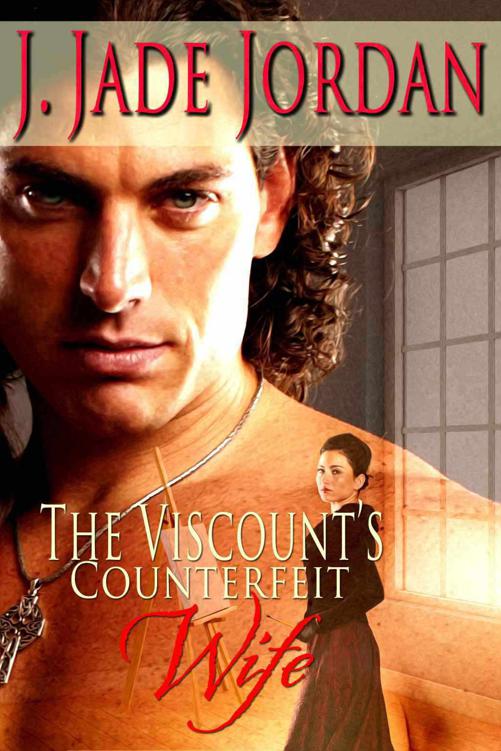 This book may not
be reproduced, transmitted, or stored in whole or in part by any
means including graphic, electronic, or mechanical without expressed
written consent of the publisher/author except in the case of brief
quotations embodied in critical articles and reviews.

Thanks Mom,
for always believing in me...
even if it has taken
a lot longer
than expected!! I love you.

Bone-chilling damp
permeated his body. He hadn’t given this dreadful climate a thought
when he decided to come home for good.

Not too late to change
his mind! Almost no one knew he was back.

Even his solicitors, he
decided with a grimace. They’d been advised to have the house
prepared for his return. Yet he saw no signs of that having been
done. True, he’d told them not to hire any servants, so he couldn’t
complain that no one was in the house. But shouldn’t it at least
look
less deserted?

To make matters worse,
the blasted key didn’t fit. “They’ve changed the damned lock!”
he muttered to himself.

There had to be a
mistake.

He lifted the knocker,
wanting to vent his ire by banging it loudly, then, he dropped it.
What was the point? The place was obviously deserted. He’d only
succeed in rousing the neighbors. Not that many of them would be
about this early in the year. The Season proper didn’t begin until
next month and there were few year-rounders living in this area.

He pulled his collar
higher. Thick fog almost obscured his townhouse and the quiet street
looked desolate at two hours past midnight. This was not the
homecoming he’d envisioned. A locked door and not a glimmer of
light to welcome him home after six long years.

Better that than to be
greeted by the Duke’s dreadful daughter as a wife! Which was what
would have happened if he’d remained in England and let his father
have his way.

Not that he regretted
leaving. His years away had been fruitful in all aspects of his life
and he was almost grateful to the Earl for unintentionally forcing
him to go.

Now, Reed Gordon Eames,
Viscount Selwich was able to cope with adversity as well as any one.
Often, better than most. He was far from being a cosseted noble. He
hadn’t, in fact, used his title since he left England and wasn’t
sure he wanted to wear it again now that he was back. He liked the
neutrality of no noble trappings.

Many were the nights
he’d bedded down in a dried-up riverbed or on the desert floor,
when finding a better place to sleep had been elusive… or unwise.
But he’d not expected to meet such trials his first night back in
London. He’d looked forward to the once-familiar comforts of his
own home.

He peered into the
drawing room window, but couldn’t see anything. Annoyed, he strode
back to fetch his bag.

Where was he going to
sleep tonight?

His club was out. He
dared not chance being seen by the wrong persons before he delivered
the documents. He glanced over his shoulder to ensure no one was
lurking about, waiting to ambush him, just as he’d been doing for
months on his circuitous journey home.

He didn’t really
think any body would be lying in wait tonight. His Marylebone
townhouse was a well-kept secret, with only Jace, Max, and his
brothers knowing about it. Still, it paid to remain alert and
watchful. He…
they
...
were too close to accomplishing their goal now to take chances.

He’d be glad to end
this mission. Right from the start, he’d been gripped by the human
tragedy being enacted and had been grateful to have the chance to
help put an end to it. He clenched his fists. White slavery. Such
cruelty to women made his stomach turn.

When his brothers’
two friends had come to Egypt on a mission as part of the “Chief’s
Crew” — a group of select gentlemen who had been recruited by the
Earl of Hallmoor, whom they good-naturedly called “Chief”, to
investigate crimes by their fellow nobles — he’d been so outraged
that someone of his own kind would commit such evil that he
volunteered to join Jace and Max in bringing to justice the monster
causing so much suffering. Little had he known it would take the
three of them over eighteen months to complete their inquiry or that,
by the end, they would add rampant, indiscriminate murder to their
quarry’s list of crimes.

Reed was going to enjoy
bringing Traubridge down. The vulture’s ruthless preying on weaker
individuals, unable to defend themselves, revolted him. Over the
months of their investigation, the trio had conducted numerous covert
recoveries of ill-fated, kidnapped young British women, who had been
terrified at the horrific prospect of being auctioned off and never
seen or heard from again. Not knowing how many ladies had already
vanished into purdah, and seeing the innocent victims of countless
murders perpetrated by that fiend, had carved a sharp edge into his
artist’s soul. It would be good to live free of that and of the
need for secrecy and courting danger at every corner.

Looking around at the
quiet London street, he heaved a sigh of relief. It might be cold and
dank, but it was home. Their work was almost over. He felt lighter
already!

By now, Jace and Max
would have received word that he was safe in his townhouse. He hadn’t
wanted to send news of his delayed arrival sooner, for fear of it
being intercepted by someone working for the wrong side.

But it was too soon to
allow his vigilance to slacken. Not only
his
life was on the line here. One wrong move and the man their morbid
sense of humor had them dubbing “The Vanisher”, would make sure
Reed and those connected to him were the next ones to vanish.

That was why he hadn’t
wanted any servants hired. No innocent people would be put in danger
on his account.

But the first item to
resolve was where he was going to sleep tonight. He began moving to
the front entrance, where he’d left his bag. The safest choice
would be to find a small, anonymous inn outside of Town.

Setting off again was
the last thing he felt like doing but what choice did he have?

Wait! The broken latch!
Why hadn’t he thought of it sooner? He shook his head. Maybe
because he was older and wiser now!

Still… it had been an
exceedingly long day and it would solve the matter of where he slept
tonight quite tidily and more to his satisfaction.

Bounce back in his
step, Reed rounded the corner and headed for the rear of the house.
He’d stash his bag under the thick shrubs next to the dustbin,
where he trusted it would remain until morning. Weary as he was, once
he reached his bedroom, he was not coming back down to fetch it
tonight!

Ah, there was refuse in
the dustbin. So someone had been here cleaning the place up! Good! If
he was lucky, his solicitors might have gotten someone to stock the
larder too, so there would be something to eat. He wouldn’t have
time to buy his breakfast in the morning before delivering the
documents to the Chief. That had to be his first order of the day
tomorrow. He was already much later arriving from Egypt than
expected. Eluding his foes had cost him valuable time. Meeting with
Jace, Max and the Chief came at the top of the list. He’d have
plenty of time afterwards to rest up and feast on his favorite
English dishes.

Soon, he stood below
his bedroom window at the back of the house. He wagered they hadn’t
had the faulty latch repaired. He was counting on it.

He shook the trellis,
testing its strength.

Grabbing the vine with
one hand, he tugged. Would it hold his weight?

A bitterly cold blast
of wind decided him against removing his great coat.

Reaching up, he grasped
a wide stalk with both hands and pulled himself upward to find a
foothold on a thick intersection between branches. Once started, he
grabbed vine after vine, making his way steadily up the wall.

Not
bad.
Not all of his youth had deserted him, though the
depravity he’d witnessed during their investigation made him feel
ancient.

Damn! The trellis ended
here! Now he’d have to rely solely on the ivy.

It had been many years
since he’d last resorted to this hazardous method of entering his
house. Too many years, he decided, as he felt the sleeve of his coat
rip under the arm. Yet, he was almost enjoying the challenge.

If it weren’t so
late, if he hadn’t just spent almost twelve continuous hours in the
saddle, and if not for the weight of his coat dragging on him, he’d
have found this exhilarating. He shouldn’t have changed into his
own clothes once he’d arrived in London. The cleric’s disguise
he’d worn to ride to London would have been lighter and he wouldn’t
have minded ruining it, with its uncomfortable collar and tight
jacket. He hoped never to have to wear it again.

Lord, the teasing he’d
be subjected to, if any of the Spares learned of this latest
escapade. He’d never hear the end of it!

He tested the vine
above him. Safe enough. He hoped! He climbed higher, the leaves
rustling and shredding as he scrabbled his way through the small
forest of snarled stalks.

Reed chuckled under his
breath as he imagined the gardener’s puzzled, yet irate reaction to
such ill treatment of the vines.

Suddenly, one of the
vines loosened.
Hell! Not now!

He stilled for seconds
to let the vine settle. But when it began to give way completely, he
grabbed for its neighbor. He had to hang on. He was almost there.

He looked up at the
window he was aiming for and noticed it was slightly ajar. Excellent!
They must be airing out his room. At least he wouldn’t have to
struggle to push the window in while hanging so precariously.

The closer he came to
his goal, the thinner the branches became. Alarmingly so. He felt
another one pull away from the wall and he halted abruptly. He swayed
there for a moment or two, sending a heartfelt, if rusty, prayer
flying upwards.

He was determined to
sleep in his own bed tonight! He willed the damned vine to hold until
he reached the window. He only needed a few more inches… His hand
reached for the next branch only to find himself swinging, unmoored,
haplessly in the air. The vine had pulled completely away from the
wall!

What had roused her so
thoroughly from sleep?

There, the sound came
again — a burst of surprised laughter, quickly stifled. She’d
swear it was right below her window! The thrashing and rustling of
leaves that followed turned her blood cold.

Oh
my god!
Someone was climbing the wall outside her window!
He wasn’t even trying to hide it. What manner of maniac was this?

The Stone Road by G. R. Matthews
Waiting for Godot by Samuel Beckett
Defenders by Will McIntosh
Claire Delacroix by My Ladys Desire
The Pale Blue Eye: A Novel by Louis Bayard
Stink and the Incredible Super-Galactic Jawbreaker by Megan McDonald
My Dream Man by Marie Solka
Glass Slipper by Abigail Barnette
Silent Voices (Vera Stanhope 4) by Ann Cleeves
Murder on Safari by Elspeth Huxley