Read The War that Saved My Life Online

The War that Saved My Life 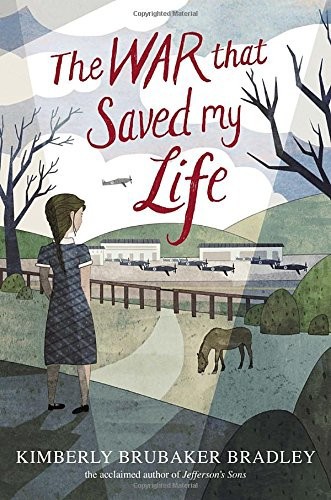 Penguin supports copyright. Copyright fuels creativity, encourages diverse voices, promotes free speech, and creates a vibrant culture. Thank you for buying an authorized edition of this book and for complying with copyright laws by not reproducing, scanning, or distributing any part of it in any form without permission.

You are supporting writers and allowing Penguin to continue to publish books for every reader.

The war that saved my life / by Kimberly Brubaker Bradley.

Summary: A young disabled girl and her brother are evacuated from London to the English countryside during World War II, where they find life to be much sweeter away from their abusive mother.

For Kathleen Magliochetti, who first introduced me to England

“Ada! Get back from that window!” Mam’s voice, shouting. Mam’s arm, grabbing mine, yanking me so I toppled off my chair and fell hard to the floor.

“I was only saying hello to Stephen White.” I knew better than to talk back, but sometimes my mouth was faster than my brain. I’d become a fighter, that summer.

Mam smacked me. Hard. My head snapped back against the chair leg and for a moment I saw stars. “Don’t you be talkin’ to nobody!” Mam said. “I let you look out that window out a’ the kindness of my heart, but I’ll board it over if you go stickin’ your nose out, much less talkin’ to anyone!”

“Jamie’s out there,” I mumbled.

I clamped my lips over what I might have said next, and shook my head to clear it. Then I saw the smear of blood on the floor. Oh, mercy. I hadn’t cleaned it all up from this afternoon. If Mam saw it, she’d put two and two together, fast. Then I’d be in the soup for sure. I slid over until my bottom covered the bloodstain, and I curled my bad foot beneath me.

“You’d better be making my tea,” Mam said. She sat on the edge of the bed and peeled off her stockings, wiggling her two good feet near my face. “I’m off to work in a bit.”

“Yes, Mam.” I pushed my window chair sideways to hide the blood. I crawled across the floor, keeping my scabbed-over bad foot out of Mam’s line of sight. I pulled myself onto our second chair, lit the gas ring, and put the kettle on.

“Cut me some bread and dripping,” Mam said. “Get some for your brother too.” She laughed. “And, if there’s any left, you can throw it out the window. See if Stephen White would like your dinner. How’d you like that?”

I didn’t say anything. I cut two thick slices off the bread and shoved the rest behind the sink. Jamie wouldn’t come home until after Mam left anyhow, and he’d always share whatever food there was with me.

When the tea was ready Mam came to get her mug. “I see that look in your eyes, my girl,” she said. “Don’t start thinking you can cross me. You’re lucky I put up with you as it is. You’ve no idea how much worse things can be.”

I had poured myself a mug of tea too. I took a deep swallow, and felt the hot liquid scald a trail clear down to my gut. Mam wasn’t kidding. But then, neither was I.

There are all kinds of wars.

This story I’m telling starts out four years ago, at the beginning of the summer of 1939. England stood on the edge of another Great War then, the war we’re in the middle of now. Most people were afraid. I was ten years old (though I didn’t know my age at the time), and while I’d heard of Hitler—little bits and pieces and swear words that floated from the lane to my third-floor window—I wasn’t the least concerned about him or any other war fought between nations. You’d think from what I’ve already told you that I was at war with my mother, but my first war, the one I waged that June, was between my brother and me.

Jamie had a mop of dirt-brown hair, the eyes of an angel, and the soul of an imp. Mam said he was six years old, and would have to start school in the fall. Unlike me, he had strong legs, and two sound feet on the ends of them. He used them to run away from me.

I dreaded being alone.

Our flat was one room on the third floor above the pub where Mam worked nights. In the mornings Mam slept late, and it was my job to get Jamie something to eat and keep him quiet until she was ready to wake up. Then Mam usually went out, to shop or talk to women in the lane; sometimes she took Jamie with her, but mostly not. In the evenings Mam went to work, and I fed Jamie tea and sang to him and put him to sleep, and I’d been doing all that for as long as I could remember, from the days when Jamie still wore diapers and was too small to use the pot.

We played games and sang songs and watched the world out the window—the iceman and his cart, the rag-and-bone man and his shaggy pony, the men coming home from the docks in the evenings, and the women hanging out wash and talking on the stoops. The children of the lane skipping rope and playing tag.

I could have gotten down the stairs, even then. I could have crawled, or scooted on my bottom. I wasn’t helpless. But the one time I did venture outdoors, Mam found out, and beat me until my shoulders bled. “You’re nobbut a disgrace!” she screamed. “A monster, with that ugly foot! You think I want the world seeing my shame?” She threatened to board over my window if I went downstairs again. That was always her threat to me.

My right foot was small and twisted, so that the bottom pointed skyward, all the toes in the air, and what should have been the top touched the ground. The ankle didn’t work right, of course, and it hurt whenever I put weight on it, so for most of my life I never did. I was good at crawling. I didn’t protest staying in one room so long as it held both Jamie and me. But as Jamie grew older he wanted to be with the other children, playing in the street. “Why shouldn’t he?” Mam said. “He’s normal enough.” To Jamie she said, “You’re not like Ada. You can go wherever you like.”

At first he did, but then he made friends with a gang of boys and went running out of sight all day. He came home with stories about the docks on the River Thames, where big ships unloaded cargo from around the world. He told me about trains, and warehouses bigger than our whole block of flats. He’d seen St. Mary’s, the church by whose bells I marked time. As the summer days grew longer he stayed out later and later, until he came home hours after Mam left. He was gone all the time, and Mam didn’t care.

My room was a prison. I could hardly bear the heat and the quiet and the emptiness.

I tried everything to make Jamie stay. I barred the door so he couldn’t get out, but he was already stronger than me. I begged and pleaded with Mam. I threatened Jamie, and then one hot day I tied his hands and feet while he was sleeping. I would
make
him stay with me.

Jamie woke up. He didn’t scream or shout. He thrashed once, and then he lay helpless, looking at me.

Tears slid down his cheeks.

I untied him as quickly as I could. I felt like a monster. He had a red mark on his wrist from where I’d pulled the string too tight.

Still his tears flowed. I understood. In all my life I’d never hurt Jamie. I’d never hit him, not once.

“I’ll stay inside,” he whispered.

“No,” I said. “No. You don’t need to. But have some tea before you leave.” I gave him a mug, and a piece of bread and dripping. It was just the two of us that morning, Mam gone I don’t know where. I patted Jamie’s head, and kissed the top of it, and sang him a song, and did all I could to make him smile. “Pretty soon you’ll be going to school anyhow,” I said, astonished that I hadn’t fully realized this before. “You’ll be gone all day then, but I’ll be okay. I’m going to fix things so I’ll be okay.” I coaxed him into going out to play, and I waved to him from the window.

Then I did what I should have done to start with. I taught myself to walk.