Read The Wave in the Mind: Talks and Essays on the Writer, the Reader, and the Imagination Online

The Wave in the Mind: Talks and Essays on the Writer, the Reader, and the Imagination

BOOK: The Wave in the Mind: Talks and Essays on the Writer, the Reader, and the Imagination
>>DOWNLOAD HERE >>READ ONLINE NOW
ads 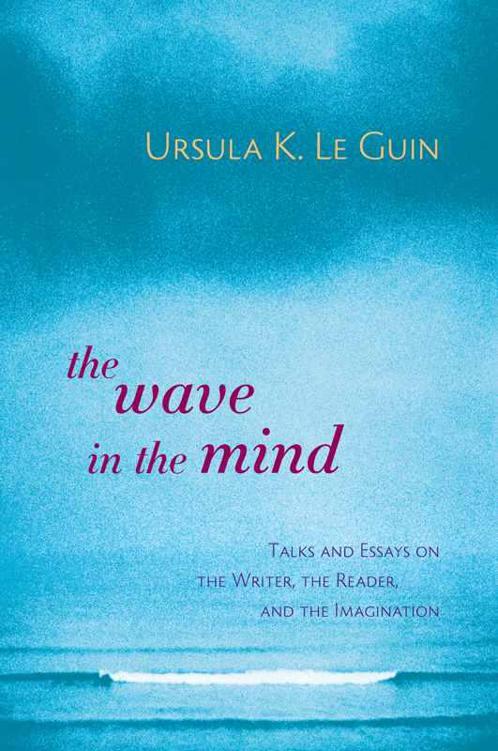 “Essential reading for anyone who imagines herself literate and/or socially concerned or who wants to learn what it means to be such.”

“What a pleasure it is to roam around in Le Guin’s spacious, playful mind. And what a joy to read her taut, elegant prose.”

Join Ursula K. Le Guin as she explores a broad array of subjects, ranging from Tolstoy, Twain, and Tolkien to women’s shoes, beauty, and family life. With her customary wit, intelligence, and literary craftsmanship, she offers a diverse and highly engaging set of readings.
The Wave in the Mind
includes some of Le Guin’s finest literary criticism, rare autobiographical writings, performance art pieces, and, most centrally, her reflections on the arts of writing and reading.

URSULA K. LE GUIN is the winner of the Hugo, Nebula, Gandalf, Kafka, and National Book Awards. She is the author of many short stories and more than fifteen novels, including
The Left Hand of Darkness
and
The Dispossessed
. She is also an honored author of children’s books, poetry, and criticism.

Sign up to learn more about our books and receive special offers from Shambhala Publications.

Or visit us online to sign up at
shambhala.com/eshambhala
. 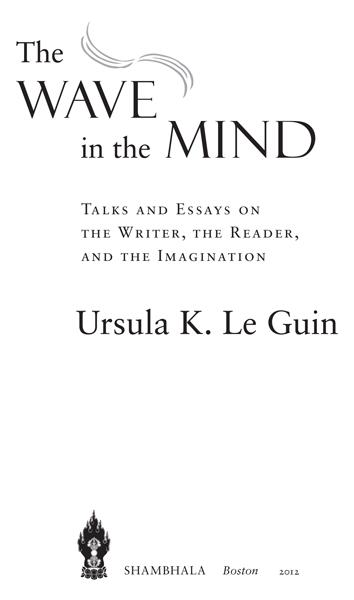 All rights reserved. No part of this book may be reproduced in any form or by any means, electronic or mechanical, including photocopying, recording, or by any information storage and retrieval system, without permission in writing from the publisher.

The wave in the mind: talks and essays on the writer, the reader, and the imagination/Ursula K. Le Guin—1st ed.

In loving memory of Virginia Kidd

As for the
mot juste
, you are quite wrong. Style is a very simple matter: it is all
rhythm
. Once you get that, you can’t use the wrong words. But on the other hand here am I sitting after half the morning, crammed with ideas, and visions, and so on, and can’t dislodge them, for lack of the right rhythm. Now this is very profound, what rhythm is, and goes far deeper than words. A sight, an emotion, creates this wave in the mind, long before it makes words to fit it; and in writing (such is my present belief) one has to recapture this, and set this working (which has nothing apparently to do with words) and then, as it breaks and tumbles in the mind, it makes words to fit it. But no doubt I shall think differently next year.

Being Taken for Granite

Things Not Actually Present: On
The Book of Fantasy
and J. L. Borges

Stress-Rhythm in Poetry and Prose

Rhythmic Pattern in
The Lord of the Rings

The Wilderness Within: The Sleeping Beauty and “The Poacher”

Off the Page: Loud Cows: A Talk and a Poem about Reading Aloud

“A War without End”

The Writer and the Character

Prides: An Essay on Writing Workshops

The Question I Get Asked Most Often

The Writer on, and at, Her Work

Written in the early nineties as a performance piece, performed a couple of times, and slightly updated for this volume.

I am a man. Now you may think I’ve made some kind of silly mistake about gender, or maybe that I’m trying to fool you, because my first name ends in
a
, and I own three bras, and I’ve been pregnant five times, and other things like that that you might have noticed, little details. But details don’t matter. If we have anything to learn from politicians it’s that details don’t matter. I am a man, and I want you to believe and accept this as a fact, just as I did for many years.

You see, when I was growing up at the time of the Wars of the Medes and Persians and when I went to college just after the Hundred Years War and when I was bringing up my children during the Korean, Cold, and Vietnam Wars, there were no women. Women are a very recent invention. I predate the invention of women by decades. Well, if you insist on pedantic accuracy, women have been invented several times in widely varying localities, but the inventors just didn’t know how to sell the product. Their distribution techniques were rudimentary and their market research was nil, and so of course the concept just didn’t get off the ground. Even with a genius behind it an invention has to find its market, and it seemed like for a long time the idea of women just didn’t make it to the bottom line. Models like the Austen and the Brontë were too complicated, and people just laughed at the Suffragette, and the Woolf was way too far ahead of its time.

So when I was born, there actually were only men. People were men. They all had one pronoun, his pronoun; so that’s who I am. I am the generic he, as in, “If anybody needs an abortion he will have to go to another state,” or “A writer knows which side his bread is buttered on.” That’s me, the writer, him. I am a man.

Not maybe a first-rate man. I’m perfectly willing to admit that I may be in fact a kind of second-rate or imitation man, a Pretend-a-Him. As a him, I am to a genuine male him as a microwaved fish stick is to a whole grilled Chinook salmon. I mean, after all, can I inseminate? Can I belong to the Bohemian Club? Can I run General Motors? Theoretically I can, but you know where theory gets us. Not to the top of General Motors, and on the day when a Radcliffe woman is president of Harvard University you wake me up and tell me, will you? Only you won’t have to, because there aren’t any more Radcliffe women; they were found to be unnecessary and abolished. And then, I can’t write my name with pee in the snow, or it would be awfully laborious if I did. I can’t shoot my wife and children and some neighbors and then myself. Oh to tell you the truth I can’t even drive. I never got my license. I chickened out. I take the bus. That is terrible. I admit it, I am actually a very poor imitation or substitute man, and you could see it when I tried to wear those army surplus clothes with ammunition pockets that were trendy and I looked like a hen in a pillowcase. I am shaped wrong. People are supposed to be lean. You can’t be too thin, everybody says so, especially anorexics. People are supposed to be lean and taut, because that’s how men generally are, lean and taut, or anyhow that’s how a lot of men start out and some of them even stay that way. And men are people, people are men, that has been well established, and so people, real people, the right kind of people, are lean. But I’m really lousy at being people, because I’m not lean at all but sort of podgy, with actual fat places. I am untaut. And then, people are supposed to be tough. Tough is good. But I’ve never been tough. I’m sort of soft and actually sort of tender. Like a good steak. Or like Chinook salmon, which isn’t lean and tough but very rich and tender.
But then salmon aren’t people, or anyhow we have been told that they aren’t, in recent years. We have been told that there is only one kind of people and they are men. And I think it is very important that we all believe that. It certainly is important to the men.

What it comes down to, I guess, is that I am just not manly. Like Ernest Hemingway was manly. The beard and the guns and the wives and the little short sentences. I do try. I have this sort of beardoid thing that keeps trying to grow, nine or ten hairs on my chin, sometimes even more; but what do I do with the hairs? I tweak them out. Would a man do that? Men don’t tweak. Men shave. Anyhow white men shave, being hairy, and I have even less choice about being white or not than I do about being a man or not. I am white whether I like being white or not. The doctors can do nothing for me. But I do my best not to be white, I guess, under the circumstances, since I don’t shave. I tweak. But it doesn’t mean anything because I don’t really have a real beard that amounts to anything. And I don’t have a gun and I don’t have even one wife and my sentences tend to go on and on and on, with all this syntax in them. Ernest Hemingway would have died rather than have syntax. Or semicolons. I use a whole lot of half-assed semicolons; there was one of them just now; that was a semicolon after “semicolons,” and another one after “now.”

SANCTION: A Thriller by S.M. Harkness
You Against Me by Jenny Downham
Soldier Stepbrother by Brother, Stephanie
Dreams of Darkness Rising by Kitson, Ross M.
Sarah's Secret by Catherine George
The Awakened Book Two by Jason Tesar
The Secret of the Rose by Sarah L. Thomson
A Is for Abstinence by Kelly Oram
Inquisitor (Witch & Wolf Book 1) by RJ Blain
The Centauri Device by M John Harrison