Read The Whirlwind in the Thorn Tree Online

The Whirlwind in the Thorn Tree 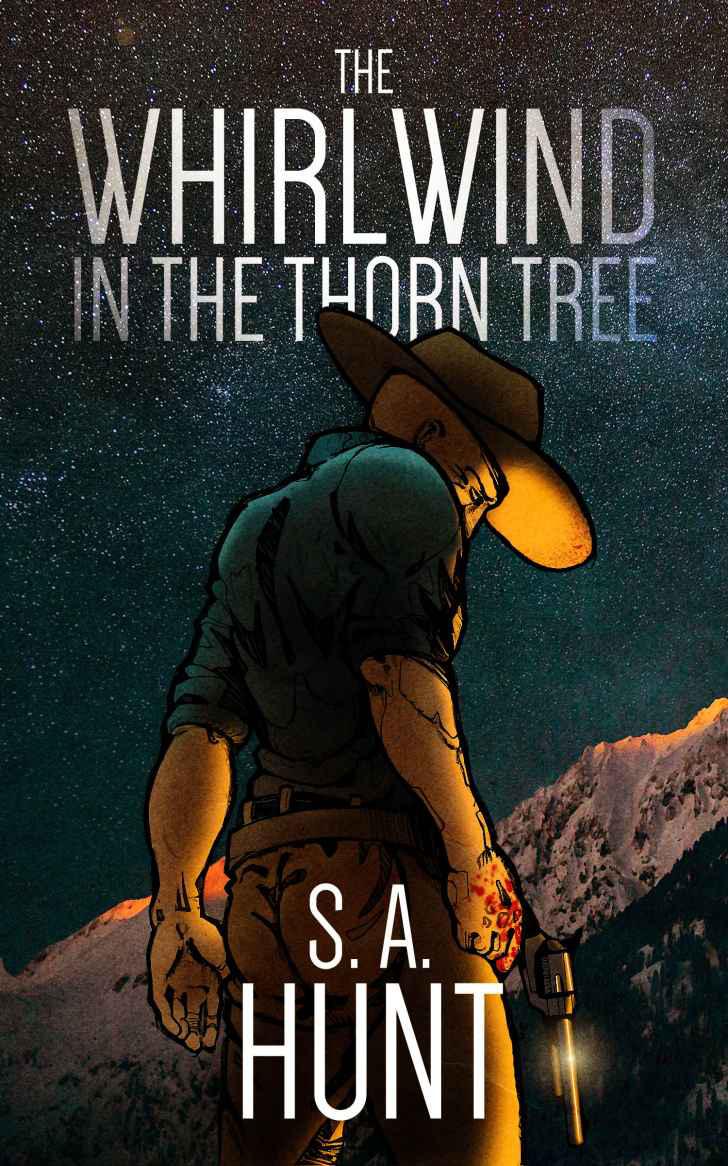 I Thought You Were Dead

The Wolf and the Dragon

Normand in the Desert

Too Many Heebies and Not Enough Jeebies

I Smell The Blood

A Wilder Shade of Pale

Why Won't You Die

A Thousand Miles from Nowhere

The Heat of the Night

My Da Called Me Pack

Walkin on the Moon

The Man Comes Around

The House of Water

His Own Kind of Ruin

The Tower of Silence

The Gunslinger Crosses the Frontier

The Uncomfortable Solace of Madness

The Friction of the Day

Home on the Range

Noreen and the King

“In school, I could hear the leaves rustle, and go on a journey.”

"How well I have learned that there is no fence

to sit on between heaven and hell. There is

a deep, wide gulf, a chasm, and in that chasm

is no place for any man."

T
HE ASSASSIN CREPT TOWARD
the house through cold blue beams, moonlight dancing across the forest floor in a handful of silver coins.

It was a small house, a two-story half-timber cottage set back deep in the trees, up the hill from the main grounds. If you weren’t looking for it, you wouldn’t even realize it was there. A small wooden platform served as the front porch roof, accessible by a door that opened in the middle. Next to the front door was a small table, and on that table was a wooden game board.

The man had never heard of the game before the house’s occupant had foisted it on him fifteen years ago, on one of their few meetings. The rules were labyrinthine and the pace was nerve-wracking. They would sometimes go days between moves.

He climbed the front porch, careful to avoid the always-creaky second step, and tested the doorknob. It was locked.

He was never one for picking locks. He went back out into the front yard and looked up at the widow’s-walk on the second story, sizing it up with a veteran eye. He rubbed his hands together and leaned on his knees, gauging and making mental calculations.

With four quick steps, he ran at the house and stepped on one of the columns holding up the platform, launching himself up at the ledge. It was a challenging jump, three meters at least. He caught the ledge with his fingertips and flexed his arms, kicking both feet up as he did so, and pulled himself onto the widow’s-walk. The railing became a ladder that he heaved himself up and over.

The night was a living thing out here in the wilderness, crawling and crying with a thousand creatures. The man paused and listened to the nightingales, squatting next to the door to avoid being seen, to make sure he hadn’t woken up the man inside.

He listened to the frogsong and the fiddling of the insects, his heartbeat settling. Still water. A telescope bolted to the railing focused a speck of moonlight onto the boards.

Satisfied he hadn’t been heard, he tried the door and found it unlocked. He eased it open, slipped inside, and pushed it against the jamb.

He crouched there in the darkness of the bedroom as his eyes adjusted to the grainy, colorless environment. Some enormous sort of artwork dangled from the ceiling, a giant paper tube that coiled around the room once. If he hadn’t entered on his haunches, he would have ran right into it.

The owner of the house lay asleep on the bed in the middle of the room, snoring softly. The intruder lingered in the shadows, watching him sleep. He didn’t
think
the fat bastard was faking it, but he knew better than to trust such a canny son of a bitch.

He crouched there for a long time, twenty minutes maybe, long enough for the sleeper to get bored of pretending and look to see what was going on.

Nope. He went on snoring, oblivious to his fate.

The man stood up and drew his pistol from the leather jackass rig under his jacket. It was a well-polished seven-shot breaktop revolver, too big to qualify as a hidden piece. He was only wearing the jacket to muffle the holster’s tack.

“I’m sorry,” the man murmured, and fired a slug at the back of Ed’s head.

At first, he thought the round had vaporized the sleeping man. The instant the pistol had discharged, the muzzle-flash lit up the room and icepicked his eardrums, and Ed had
vanished.

He didn’t get up and run, he simply
ceased to exist,
and his assassin couldn’t understand what had happened. In a strange fit of pique, he had the bizarre notion that he’d popped Ed like a balloon. Ed was a big guy, almost three hundred pounds. Maybe all that flab was nothing but hot air. The killer stood there, the gun still pointed at the bed, trying to wrap his head around the results of his premeditated murder, when snow began to fall from the ceiling.

Great big goosedown flakes waltzed to and fro as they fell, twirling in the air. Still bewildered, he looked up and opened his other hand, catching one of the flakes in his glove. It was a feather from the mattress.

A tearing, a deafening pain whipped across his mind and he dropped the pistol on the duvet, sinking to his knees, his fists over his temples. Both ears were ringing and he felt like all the blood had drained out of his skull, leaving him wall-eyed and out of breath. The room centrifuged like a zoetrope.

“Guhh,” he said, his forehead ground against the intricate carpet. His brainpan felt like it was being emptied and washed out. “Nnnnggghhh, ffffggg...leave me be, for the love of the gods. I’ve done your deed.”

The man floundered on the floor, his fingertips twitching, searching. He found the bedpost and hauled himself to his feet. His cheeks were cold; he touched them and realized that he was weeping. He picked up the smoking revolver and put it back in its holster, and sat down on the hope chest at the end of the bed to collect himself.

His downcast eyes swept over the familiar shape at his feet. He leaned over and picked up the gunbelt that had been lying at the foot of the bedpost. It was empty of all but the rounds.

A cursory search uncovered the pistols lying on the nightstand, in easy reach of the bed. The man picked them up, put them in the gunbelt, and slung the gunbelt over his shoulder like a gentlemen’s jacket. It was an easy, jaunty look, but he felt sick to his stomach and not at all jaunty.

On the way downstairs and out the front door, he paused at the typewriter sitting on the desk and typed a few meaningful words, then walked out onto the porch where he half-expected to see a squad of lawmen waiting to gun him down as he left the house.

There was no one. A surge of grief and anger filled him up and burned away quickly, leaving only regret in its place, tempered by shame. Perhaps he only
wanted
there to be someone there to punish him for what he’d done.

He raked the pieces from the game board and stormed away.

The sound of the assassin’s gunfire startled him awake, but instead of his bed, Ed found himself underwater. A dark and subtle landscape of undulating blue, red, and green materialized from the nothing. The cold water threatened to take his breath away.

Ed pushed the slimy stones with heavy hands and rose against the water’s surface, feeling it glass smooth and round over the top of his head. It seemed to happen in slow-motion. He couldn’t get enough air into his burning chest, the water wouldn’t stream out of his beard fast enough. It clung to his face like melting ice and blurred his eyes.

He gazed, bewildered, at the dead fingers of the evening forest through a curtain of crystal.

He was on Earth. How did he get to Earth?

Then the water was gone and he fell away from it, collapsing on his back at the stream’s edge as it coursed over his numbing feet. He sat up and barked a gout of water from his lungs, panting in ragged gasps, the pain sawing at his throat with every breath.

In that clarity which is so common to the dying, he looked down and marveled with grim eyes at the little sores all over his naked shins, calves, and feet. The diabetes was eating his legs, but today, today was the last day he’d ever have to worry about it again.

Out of the chilling rush of the autumn water, the bullet-hole howled anew and Ed fell back again onto his elbows, growling.

(get to the house)

His head felt like it was wrapped in foam. As he had done so many times before, for so many years before, for so long to his benefit, Ed heeded the raspy words in his head.

Dropping In by Geoff Havel
Balancing Acts by Zoe Fishman
Uncle Trev and the Whistling Bull by Jack Lasenby
Soulfire by Juliette Cross
Via Dolorosa by Malfi, Ronald
Emma's Table by Philip Galanes
Intrepid by J.D. Brewer
The Yearbook by Carol Masciola
Peril on the Royal Train by Edward Marston
Mad Lord Lucian by West, Shay