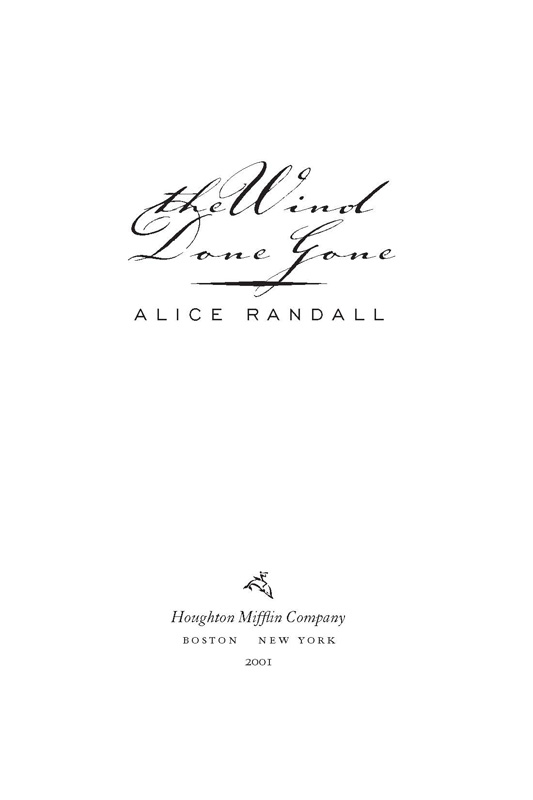 This novel is the author's critique of and reaction to the world described in Margaret Mitchell's
Gone With the Wind.
It is not authorized by the Stephens Mitchell Trusts, and no sponsorship or endorsement by the Mitchell Trusts is implied.

This document was discovered in the early 1990s. It was among the effects of an elderly colored lady who had been in an assisted-living center just outside Atlanta.

Specifically, two documents were found: a leather-bound diary, written in an ornate and hard-to-decipher hand with a pen and pencil, and a typescript of the diary prepared sometime later.

According to notations in her medical records, Ms. Brown was hospitalized in July of 1936 for a period of three months after suffering a severe emotional collapse. She was hospitalized again for a month in 1940, beginning on New Year's Day. Other than these two episodes (which coincide with the publication and movie premiÃ¨re of Margaret Mitchell's
Gone With the Wind),
it appears from letters and clippings that Ms. Brown had enjoyed a life of excellent health and service to the community, frustrated only by her inability to get the diary published.

Pressed into the diary was a photo-postcard of the Washington Monument under construction, a fragment of green silk, and a poem by Ernest Dowson, "Non sum qualis eram bonae sub regno Cynarae."

Last night, ah, yesternight, betwixt her lips and mine
There fell thy shadow, Cynara! thy breath was shed
Upon my soul between the kisses and the wine;
And I was desolate and sick of an old passion,
Â  Â  Â  Â  Yea, I was desolate and bowed my head:
I have been faithful to thee, Cynara! in my fashion.

All night upon mine heart I felt her warm heart beat,
Night-long within mine arms in love and sleep she lay;
Sure the kisses of her bought red mouth were sweet;
But I was desolate and sick of an old passion,
Â  Â  Â  Â  When I awoke and found the dawn was gray:
I have been faithful to thee, Cynara! in my fashion.

I have forgot much, Cynara! gone with the wind,
Flung roses, roses riotously with the throng,
Dancing, to put thy pale, lost lilies out of mind;
But I was desolate and sick of an old passion,
Â  Â  Â  Â  Yea, all the time, because the dance was long:
I have been faithful to thee, Cynara! in my fashion.

I cried for madder music and for stronger wine,
But when the feast is finished and the lamps expire,
Then falls thy shadow, Cynara! the night is thine;
And I am desolate and sick of an old passion,
Â  Â  Â  Â  Yea, hungry for the lips of my desire:
I have been faithful to thee, Cynara! in my fashion.

Today is the anniversary of my birth. I have twenty-eight years. This diary and the pen I am writing with are the best gifts I gotâexcept maybe my cake. R. gave me the diary, the pen, and the white frosted tiers. He also gave me emerald earbobs. I think maybe my emeralds are just green glass; I hope maybe they be genuine peridots.

I was born May 25, 1845, at half-past seven in the morning into slavery on a cotton farm a day's ride from Atlanta. My father, Planter, was the master of the place; my mother was the Mammy. My half-sister, Other, was the belle of five counties. She was not beautiful, but men seldom recognized this, caught up in the cloud of commotion and scent in which she moved. R. certainly didn't; he married her. But then again, he just left her. Maybe that means something to me. Maybe he's just the unseldom one who do recognize.

If I strip the flesh off my bones, like they stripped the clothes off my flesh in the slave market down near the battery in Charleston, this would be my skeleton: childhood on a cotton farm; a time of shawl-fetch slavery away in Charleston; a bare-breasted hour on an auction block; drudge slavery as a maid in Beauty's Atlanta brothel, when Milledgeville was the capital of Georgia and Atlanta was nothing; a season of candle-flame concubinage in the attic of that house; a watery Grand Tour of Europe; and, finally, concubinage in my own white clapboard home, with green shutters and gaslights, in the center (near the train depot) of a fast-growing city that has become the capital of Georgia, concubinage that persists till now. How many miles have I traveled to come back to here?

Planter used to say I was his cinnamon and Mammy was his coffee.

He said those words a day I had gotten into trouble dashing before Other upon the stained-glass colored light that fell in rows of blue and pink diamonds down the wide hall of the big house. If I was ten years old, it must have been 1855. I bumped into the leg of the Hewitt sideboard. Other was ten years old too. It was one of those days we had back when everything seemed it would always be just as it has always been. Everything and everyone had a place and rested deep in it, or so it seemed that day to would-be knights and ten-year-olds. Then I bumped into that carved leg, and the shell-shaped bonbon dish jumped off Lady's sideboard as if it just wanted to split into a hundred porcelain shards on the lemon-oiled pine floor. Something had changed, and I had changed it. Someone wanted to beat me. Mammy said she'd beat me good, with a belt. Other lied and said
she'd
knocked into the table. Said it 'cause she knew it would pain Mammy to give me a whipping.

And sometimes Planter said it when he heard me making up little rhymes to sing to myself. Sometimes when Mammy was putting Other to sleep on a day pallet for a nap, he would call for me to sit at his feet on the broad porch and sing my little songs to him. "Cindy, come sing, come sing! Ain't you my Cinnamon and she my coffee?" he'd ask. And I'd be slow to go, because I knew someone might be missing me.

"Gracious plenty foreign to me child."

R. says Planter was an Irishman and all Irish are shiftless, lazy crackers, no matter how rich they get. He always wants me to look outside the neighborhood for models of my deportment. He often mentions that Georgia was once a penal colony. The first time he said it, I didn't know what a "penal colony" was. He says only the English and the French know anything about gracious plenty. He says when Planter and Mammy got together, they cooked a broth too rich for potato-water blood.

It was Planter who sent me away, but he got the go-ahead from Mama. It was the year his third son died, and he said it would be a good turn for me. I was thirteen the day they rode me off. It was 1858.

Mammy was my Mama. Even though she let me go, I miss her. I miss her every time I look into a mirror and see her eyes. Sometimes I comb through my long springy curls and pretend that the hand holding the comb is hers. But I don't know what that looks like. Then I wish I was Other, the girl whose sausage curls I've seen Mammy comb and comb. I wish for the tight kinks of the comber or the glossy sausages of the combed. I wish not to be out of the picture.

Mammy always called me Chile. She never called me soft or to her softness. She called me to do things, usually for Other, who she called Lamb. It was "Get dressed, Chile!" and "What's mah Lamb gwanna wear?"

I have tried to forget the place I was sent from, Cotton Farm, and the house in which I was born, Tata. If Sherman had burned it down to the ground, I believe I would not have labored in vain. I believe I would have succeeded. I believe I might have attained my own personal succession. But he didn't. And I keep thinking that God saved it for some purpose, but it wasn't God who saved Cotton Farm; it was Garlic, when he flapped like a fool and begged the Union troops to carry him away from all the fever and dying in the house. Every time he'd approach a Union horse and rider, they'd buck back farther away. Nobody wanted to get close enough to any of the buildings to rescue a slave or make a "building barbecue" possible. So, after all that I have forgotten, I still remember the place. The place, and the people who sent me away.

They called her Mammy. Always. Some ways I like that. Some days when it was kind of like weâshe and meâhad a secret against them, the planting people, I like it. Different days, when it feels she wasn't big enough to have a name, I hate it. I heard tell down the years they compared her to an elephant. They shouted down to their ancestors: She was big as an elephant with tiny dark round eyes. But she wasn't big enough to own a name. To me she was big as a house. Big as two houses. I'd be scared to be that.

Scared to be bigger than a minute and a snap of dark fingers. "She's no bigger than a minute," Mammy would say, snapping her thick, strong-as-branches fingers, stealing words from him whose watch Garlic inherited. Him who was my Daddy and never gave her or me nothing like time, Planter.

Anyways, Mammy's eyes are big, just like mine. Garlic used to tell me that all the time. Garlic was Planter's valet, and he liked women with great big legs. If I ever started to get big, R. would let me go.