Read The Wizards of Venus Book One: Magic Touch Online

The Wizards of Venus Book One: Magic Touch 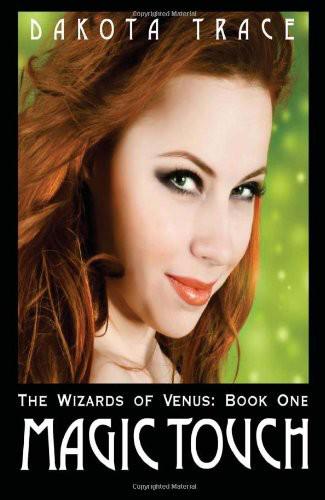 WARNING: This book is not transferable. It is for your own personal use. If it is
sold, shared, or given away, it is an infringement of the copyright of this work and
violators will be prosecuted to the fullest extent of the law.

This book is for sale to ADULT AUDIENCES ONLY. It contains substantial
sexually explicit scenes and graphic language which may be considered
offensive by some readers. Please store your files where they cannot be
accessed by minors.

This is a work of fiction. Names, characters, places and incidents are solely the
product of the author’s imagination and/or are used fictitiously, though reference
may be made to actual historical events or existing locations. Any resemblance to
actual persons, living or dead, business establishments, events or locales is
entirely coincidental.

The Wizards of Venus: Book One

For all her hard work, countless calls and hand holding.

"On the eve of the Gathering, your true destiny shall be foretold. Take care whom you
share your final dance with, my dear. For he will be the one with whom you will share
your essence. Body, heart, soul and magic alike will belong to him. In return he shall
share the same and love you for the rest of your life. There will be no escape. You will
know a great love but an even greater danger. The higher passion's flames burn, the
more danger shall stalk you."

Gracie O’Connor spun around happily. The gown was a full-skirted affair with off-the-shoulder sleeves in a pale blue. When she had first seen it at the clothier's, she knew it was everything she’d ever dreamed of.

“It’s lovely, dear,” her mother said affectionately, “you will take his breath away."

“Mother! How many times do I have to remind you? Rand asked me as a friend not a potential chosen. He’ll be expected to marry a princess one day. I doubt he’s looking for a serious relationship at this point, so I’m simply a safe date to take to the Gathering."

“So you say. The Gathering only comes once in a wizard's or witch's life. It has always been our tradition to celebrate the completion of our primary education. For you it will be more though. It has been foreseen and even though I know you don’t like it, you can’t stop it, sweetheart. It is meant to be.”

“Aw, Mom! I can’t believe you’re still going on and on about something Auntie Clara’s saw.” Nibbling on her lip, she looked up at her mother. “I was only six, she could be wrong, couldn’t she?”

“Has she ever been wrong, sweetheart? When she saw your chosen claiming you during the final dance, I would take it seriously.”

“I do take it seriously, Mom. I’ll be careful when it comes to my Gathering. This is Rand’s. I assume he’s asked me because I’m his best friend. He gave me his “poor me”

face and I couldn't deny him. How does he do that anyway? You’d think I'd be immune 6

to it by now.” Gracie couldn’t help but laugh at herself. Her laughter died when her mother responded.

"She didn't say it would be your Gathering, Gracie. Just
a
Gathering."

Before Gracie could comeback with a suitable argument, she heard the chimes announcing the arrival of her date. Pulling away from her mother, she rushed out of her bedroom.

“I’ll get it!" Holding her skirts up, she ran down the stairs. She met her dad at the bottom.

“I don't think so, young lady." Colin stopped her with a gentle hand.

"This is a special honor, Gracie. He could’ve chosen any witch to accompany him. Tradition states we acknowledge our honor at his choice…” when she looked like she wanted to argue the point he continued, “and
we will
follow tradition. The customary greeting is going to be observed! Go back upstairs with your mother and don’t give my any guff about it.”

“Daddy, you're making a big deal out of nothing.”

“Now, Grace Ann.” Crossing his arms over his chest, she realized he meant business.

Her father opened the door. Her best friend and the crown prince of Venus, Randall de Carthwright stood patiently. Colin looked over his shoulder at her.

"Am I? Perhaps I should ask him?” When she flushed deep pink with embarrassment, he turned back to Rand and urged him to come in. Stepping back to 7

allow Rand to enter, Colin ignored his daughter and slid into the customary tradition despite the fact his daughter was still present.

"Thank you, Your Highness, for the choice of my daughter as your escort." Colin ended with a small bow which hid the humor he was finding in doing so.

"It’s my honor to escort your daughter. She and I’ve been fairly close throughout our years of primary education. I was pleased when she accepted." As her with her father, Rand had to fight to not let the absurdity of the situation to keep from showing. She wished he would look at her but his attention was focused firmly on Colin.

Colin straightened from the bow and winked at Rand, who had to fight to keep from laughing. “Then you would agree that I am not making a ‘big deal’ out this?"

"Since she has decided to forgo the natural order of things, please allow me to present to you, my daughter.” Taking Gracie’s elbow, he presented to her to Rand.

"Mistress O'Connor." Rand’s voice washed over her and she had to fight the urge to tremble.
Not now, Gracie. Remember he’s your best friend, nothing more.

“Your Highness.” Gracie finally lifted her head to meet his direct gaze.

Rand's breath caught in his throat as something inside of him awoke. He didn't have time to examine it. Tradition demanded he complete the formalities even as absurd as they seemed to be. 8

He barely noticed when her mother handed her the traditional gift of thanks. He watched as Gracie stepped forward with a beautiful ribbon-tied flower. Looking down as she offered it to him, he saw it was a prized orchid from Earth.

"Thank you, Gracie." He winced at his slip of the tongue.
Keep it together, Rand. No
familiarity until after tradition is observed.

“I thought you might like this. It is but a small token of my thanks for choosing me.”

“Thank you, Mistress.” Accepting it he felt relief as the traditional greeting was completed. “Shall we go?"

"As you wish, Your Highness."

Within moments they were out the front door and walking down to the hovercraft. Rand held the door while Gracie slid softly into the plush interior. He slid in behind her. As the hovercraft glided off, Gracie sighed.

"I'm glad that's over." Setting the orchid down next to him, he turned to face her.

"Rand, it was just absurd. We’ve grown up together. I’ve lost count of how many times we played together and got into trouble while our dads were hammering out some new treaty or law."

"I can’t even begin to imagine. But I still appreciate you doing this for me, Gracie. You're one of my best friends."

"Like I wouldn’t give you anything you wanted when you give me the look. One of these days I’m going to learn how to resist it. Then watch out.”

“Yeah, like that’s ever gonna happen.” He knew he used the look shamelessly when it came to his best friend but he couldn’t help himself.

“I would’ve fought a little harder if I realized Dad was going to demand we do everything by the old ways."

"I didn't mind, Gracie. I've been raised on tradition. I would’ve been miserable doing this with anyone else." Before she could ask why, the hovercraft stopped in front of the magnificent palace that was the royal home.

After the usual fanfare which always greets the prince, they entered the ballroom. If it hadn't been for her promise to Rand, she would’ve found a way to disappear into the crowd. She wasn’t used to all the attention he took for granted.
This is totally different than the time I spend with him in his family’s private home.

With each flash of the reporter’s cameras, Gracie had to steel herself to not to turn or to run and hide.

She wasn't sure what was more daunting -- the cameras or the reporters themselves. She’d had to grit her teeth when one particular reporter speculated about a romance brewing between her and Rand.
I’m glad Rand was busy with greeting his
father and hadn’t heard the garbage he was spewing. The last thing I need is my best
friend to think I came with him because I’ve romantic thoughts about him, even if it is
true.

When the dancing began, Gracie began to relax. She loved to dance. She watched with a smile as Rand took his mother, Queen Aria, onto the dance floor and formally began the first dance of the evening. When the dance came to an end, everyone 10

clapped. Rand returned to Gracie’s side as the music picked up tempo. She smiled delightedly while he led her out onto the large dance floor.

She danced several fast dances with Rand as well as with Jonathan, the third musketeer of their group. When the music slowed after several fast dances, Gracie was looking forward to being able to get a glass of cold punch. As she left the floor, she felt a warm hand grasp her elbow. Looking over her shoulder, she smiled warmly at Rand.

“You want a drink, too?” She was still breathless from the dancing.

“No. You’re my escort. We’ve got to share the first slow dance.” Turning her, he led her back onto the dance floor. After pulling her into his arms, he kept his voice low.

“You’re my protection from them.”

“Who?” Pulling back far enough to look up at him, she waited for his answer.

“The Princess and her ladies.”

“Get real, Rand. They’re harmless and you know it. You can’t run from the Princess forever. Eventually one day you will have to marry her or another like her. Princes are expected to marry princesses. But I’ll dance with you anyway.” She nearly stumbled when he paused before resuming the slow waltz.

“Nope. No princesses for me. They just don't do it for me. Besides, I think I’ll pick my own bride. As of right now, I’m going to marry you, Gracie.”

"Don't I have any say in it?" Her heartbeat jumped at the idea and she almost missed a step.

"Oh, I can just see me married to the King of Venus. There's something missing in this picture, Rand."

"Do tell?" He pulled her even closer to him.

"Logic. I would make an awful queen." She hung on tighter as he executed an elaborate spin.

"Has anyone told you you’re seriously disturbed?"

“Only you.” His laughter flowed over her.

The rest of the evening flew by like a dream. Somehow she managed to avoid the worst of the reporters and danced most of the night away with Jonathan and Rand. She didn’t notice when none of the other wizards approached her. When it was time for the customary dance between royalty, Gracie stood along the edge of the crowd and watched Rand and Deanna take their turn on the floor.
They look
perfect together. This only makes it obvious he’s meant for more than me.
As much as
I’d love to be his Princess, he’s destined for better than the daughter of his father’s
advisor. Just enjoy the rest of the night, Gracie. He’ll be leaving soon to begin his
advanced studies and we won’t see each other so often.