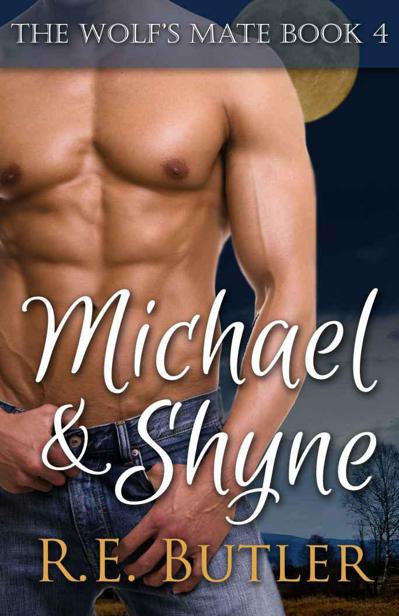 This ebook is a work of fiction.  Names, characters, places and incidents are the product of the author’s imagination and not to be construed as real.  Any resemblance to actual persons, living or dead, events or locations is coincidental.

Disclaimer:  The material in this book is for mature audiences only and contains graphic sexual content and is intended for those over the age of 18 only.

I'd like to thank Lisa at Editor's Cove for editing this book for me.  When I was against the wall, Lisa stepped up to the plate and came through for me with flying colors.

With much love to Kameko Gay...Allen will still be here when you're ready.  To Aunt B.L., words can't express how much your support means to me.  To
Jacq McNeill...thank you for helping me with Michael's story, I'm so proud to call you friend.  To Alex G., who tirelessly supports me and runs my Facebook page, I hope you know how special you are.  Hugs and kisses to all my fans and followers on the blog, Facebook and Twitter...your encouragement gives me wings.  And finally to my husband...I love you.

From the Author & Other Works

“I did it, Trav!” Shyne gushed, opening the door to the
Coffee Bean
and rushing inside.  “Check it!”  She slapped the paper on the counter between them and beamed with pride.

“Look at you, baby girl,” he laughed.  “Aren’t you just the cat with the cream?”

He pulled the paper from under her fingers that stated she was now a Group Fitness Instructor certified through the ACE.

Her best friend peeked over the certificate with his soft gray eyes and quirked one perfectly plucked brow.  “You really want to be an aerobics instructor?”

She grinned.  He’d been teasing her mercilessly for the last year while she self-studied for her certification and learned all she could by taking classes at different gyms in the area, including Stone’s Gym.  Their current group instructor was moving away, and it had been her good fortune to stumble into their gym when she was drawing close to the end of her studying.

“I’m not wearing leg warmers and headbands, you dork.”  Snatching the certificate away from him, she looked it over once more, her excitement rising.  There in beautiful script was her name:  Shyne Marie Jackson.
Fucking-A.

“Sit for a coffee?”  Trav gestured to the line of machines as if she could miss their gleaming exteriors.

“Ooooh.”  He grinned further, showing a dimple.  Trav was too adorable for his own good.  Carefully spiked light brown hair with blond highlights was standing at perfect attention on top of his head.  She knew from waiting for him to go clubbing that he spent a long time in front of a mirror to look so good.  Tall and lean, he was the perfect man for her, except he also liked cock.
Sometimes it’s the little things…

“You know they're just my friends.”  She was talking about Dante, Cairo and Mason, the three owners of Stone’s Gym.  They were brothers and fantastic sides of man-beef.  When she joined their gym a few months ago, they only had one group instructor who taught four classes a week.  Their gym was mostly for meat-heads:  those big huge guys who liked the weights and nothing else.  She liked a man who could lift her over his head without a thought, but she also liked something between the ears.  And a wicked sense of humor helped, too.

“I don't know how you can be 'just friends' with such hot guys.”  Trav gave her his best smirk and leaned over the counter to kiss her cheek.  “You know, I still think that you need a disclaimer about your appearance for your future students.”

“What do you mean?  What’s wrong with the way I look?”  She looked down at herself.  Feet, legs, ass, tits, arms and head.  All where she left them this morning.

“You look like an underwear model.”  He smirked further and folded his arms.

“So a lot of that flat belly is from good genes.”

True.  She had an excellent metabolism.  But she loved exercise, too.  “So?”

“So?  That’s false advertising!”  He barked out a laugh, and she echoed it, finger waving at him as she bumped her ass against the door to open it.  It was a great ass.  Why not use it?

When she arrived at Stone’s Gym, she found Mason, youngest of the three brothers and also the sweetest, sitting at the front desk.  The chair next to him held Kathy, the receptionist.  She was one of those bubbly, big-titted girls who thought she could skate by on her looks forever.  Maybe she could.  If Shyne was her, she’d also try to be smart and nice, but that was just her.

Mason stood up quickly, and the chair clattered behind him.  “Well?”

“Fucking right you did!”  He bounded around the u-shaped desk and swung her up into his arms.  Mason was a computer nerd who happened to also have a passion for weight lifting, and it showed.  Like his brothers, he had a body born of hard work and dedication with thick muscles on top of thick muscles.  Each brother had beautiful olive-colored skin and jet-black hair.  Mason kept his hair long, which allowed his curly locks to dust his shoulders.  Dante, the oldest, cut his hair short on top and shaved on the sides.  And Cairo, the largest of the three, shaved his head.  Dante ran the gym.  Mason and Cairo were trainers, and Cairo was also a boxer in underground off-the-books matches because he — and his brothers — happened to be were-hyenas.

Shyne was just human.  She’d never known any were-animals when she was growing up.  And it wasn’t until she and Trav met when she was eighteen and he was nineteen that she met her first were.  It was one of Trav's first boyfriends, Todd, who was something called a rogue werewolf.  That meant he had no pack.  They didn’t last long.  Todd had a problem with monogamy, and Trav had a problem with that.

“Uh, Mason,” she groaned, unable to catch a breath in his tight grip.

“Sorry, sorry.”  He put her down gently, and she gulped in a deep breath.

“It’s okay,” she promised and went up on her toes to kiss his cheek.  He was her biggest supporter next to Trav, and she adored him.  She adored Cairo and Dante, too, but Mason was her favorite of the three, and she cherished his friendship.

“Go see Dante.  Terri’s ready to hand over the reins to you.”  He gave her a swat on the ass as she turned to leave, and she chuckled at his playfulness and went to find Dante.  As she expected, the oldest and most serious brother was buried behind a stack of papers on his desk, frowning at the computer.  Underneath the golf shirt with the gym’s logo embroidered on the front left, his body was a hot muscular playground that any red-blooded woman should be clamoring to touch and hold.

She was not one of those women.

She couldn’t really explain it, but they felt more like brothers to her.  Maybe it was because there were three of them, and they seemed to do everything together.  She wasn’t sure if that was because they were hyenas or because they were just that close.  They had never asked her out individually, but she had been over to their beautiful home for dinner on a few occasions.  Everything was casual with them, but underneath the friendly overtures was an undercurrent of tension that made her think that, if she just made a suggestion for more, she could have it.  The question on her mind always was whether having more meant Mason alone – which is what she might have entertained – or all three together – which wasn’t even on the radar of things she wanted to try.  Not even once.  She was a one-man woman, period.

After sharing her news with Dante and getting a cheek-kiss and hug, he made a copy of her certificate for his files and officially offered her the job.  For the next two weeks she would teach with Terri, and then Terri would be gone and Shyne would have her classes.  The pay was decent, and she got full use of the gym whenever she wanted.  She also got to have more than four classes a week, which was something she very much wanted.  All she had to do was get people to want to take her classes and help bring more business into the gym.

She found Cairo in the boxing ring.  The main floor of the gym was all equipment; everything from bikes to treadmills to machines to weights.  Up a flight of stairs was an exercise room with glass doors and one wall of mirrors.  Her fucking classroom!  A small open area outside held cool-down and stretching machines, and in another room was a boxing ring and training area.  Although Cairo spent most of his time training others on the first floor, his free time was dedicated to training himself in the boxing ring and with the heavy bags.  She’d never really understood the phrase "finely-tuned machine" when it applied to a person, but Cairo was the definition of the word.  Perfectly sculpted and enormous, he was flexible in a way that belied how big he was.  She watched him weave and duck around the heavy bag as he pounded into it.  She’d never asked, but she always figured that part of the reason he fought in the underground matches was because he wasn’t entirely human.

He stopped abruptly, panting.  “Hey!  Did you pass?”

She really didn’t think she’d been smiling so much in her life.  “Yeah!”

4 Cupids Curse by Kathi Daley
On Wings of the Morning by Dan Verner
The Wagered Wife by Wilma Counts
Carried Away by Anna Markland
Frontier Gift of Love (American Wilderness Series Romance Book 5) by Dorothy Wiley
Flying Shoes by Lisa Howorth
Charade by Sandra Brown
The Silver Castle by Nancy Buckingham
Anywhere by Jinsey Reese, J. Meyers
A Corpse in the Koryo by James Church