BOOK: The Wooden Mile
>>DOWNLOAD HERE >>READ ONLINE NOW
ads
He turned home, quick on his feet. Finally slipping in through the front door, he ran to the glass case under the stairway and stared at the pike.
“Please tell me more!” he whispered to the
fish. But Mrs. Carelli must have heard the alarm and seen him come through the door. She was hunting him down.
“STANLEY BUGGLES, I want a word with you! I've warned you about spending too long out in the dark more than once now, and if you're not careful I'll resort to locking you in your room!”
It was only a small fishing village, thought Stanley. What was so bad that he couldn't step outside the door after dark? He climbed the staircase and sat in his room, looking out of the window. The dog trundled past awkwardly on its three legs. A fantastic moon hung over the harbor and sprinkled yellow light upon the fishing boats.
“There is something wickedly weird about this place,” said Stanley through the open window.
He lay on his bed and opened a book. But before he had even begun to read, he had fallen asleep, the book flat on his face. And the letter that he had forgotten to mail for the second time that day drifted from his pocket to the wooden floor.
5
Randall Flynn
The following morning, Stanley was wandering through the village, and although he was becoming accustomed to peculiar happenings he was surprised to cross the path of another three-legged dog. No, it
wasn't
the same one. It was smaller and scruffier. It couldn't have been
more
different from the first one. And anyway, this time it was
the front leg on the left and not the back leg on the right. This is what his mother would have described as
“too much of a coincidence.”
And indeed it was. In fact, the more he thought about it the more he was sure he hadn't seen a dog with every limb intact since he'd arrived.
Just as he was pondering this Stanley realized he was standing outside The Sweet Tooth again and that Mr. Cake was peering out through the window. But the dog distracted him, circling around his feet and fussing over him. Stanley ruffled the hair on its head and scratched its chin. Its coat felt rough, and a small black patch was circled over one of its eyes.
“C'mere Silver,” came a shout. A spindly-looking character with long dark hair and a chiseled face was beckoning his dog, tapping his thigh with the flat of his hand and whistling in short bursts through his teeth. 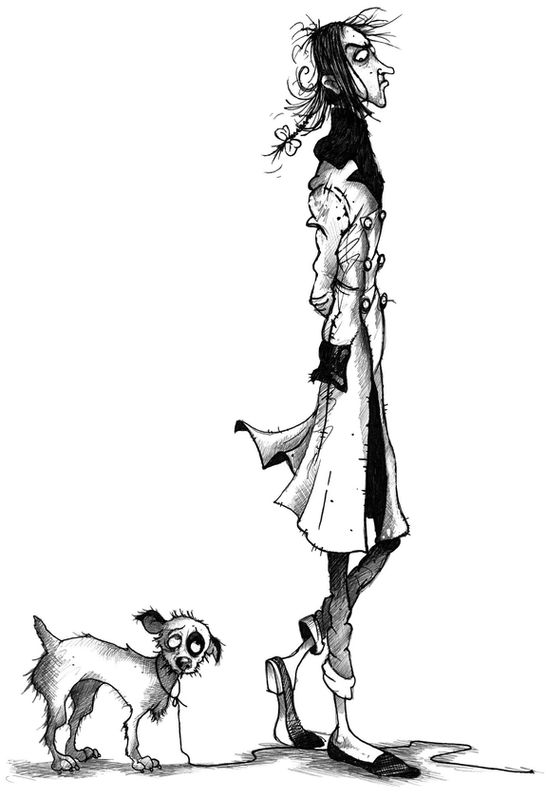 “Come on, Silver, 'ere boy. S'alright, lad, he won't hurt you. But I'd stay away from that place if I were you,” he said, nodding his head toward the shop. “It'll only bring you trouble.”
“You mean the sweet shop?” asked Stanley, who by now was trotting alongside the man, trying to match his pace. “Do you know Mr. Cake then?”
“Only well enough to stay away from 'im.”
“What do you mean?” persisted Stanley. But the man was not much for talking.
“I'm just warning yer, lad, that's all. C'mon, Silver.” And he was off again.
“What now?” said Stanley to himself. He had to find out more. He was in the middle of something and he didn't even know what it was.
He wandered aimlessly, watching the fishing boats in the harbor, and found himself up on the hill where the inn stood. A sign swung in the breeze over a small wooden door studded with iron nails. The Grinning Rat. Suddenly he noticed Silver again, scratching around in the doorway.
Stanley peered through a small window. The old man was sitting in a corner, staring into a drink.
Stanley had an idea. Perhaps if he waited, the drink would loosen the man's tongue! He shot inside. “I'll walk your dog for you, mister.”
“Not you again!”
“I don't want nothing for it,” Stanley said. “I just like dogs.”
“All right, lad. Don't be too long, mind.” He smiled, showing a row of blackened pegs
as he handed him a thin, tattered length of rope.
Â
Stanley made sure he was gone for a good couple of hours. On his return, the old man was slightly the worse for wear. Six empty tankards were lined up on the table. Stanley sat down and handed the man the leash.
“I'm sorry I was so long. He got away!”
The man hit the dog and it shot under the table with a whimper. Stanley stared at his feet.
“What were you telling me about Mr. Cake?” he asked, as if the man had been halfway through telling the story.
The old man looked Stanley straight in the eye and knitted his brow. He leaned closer to him and Stanley could smell the ale on his breath. There was a small tattoo on his neck:
a mermaid with a curled-up tail and long hair. The man took a shifty look around the room and then steered his eyes back again.

“The name's Flynn. Randall Flynn. But you didn't hear any of this from me, right?” Stanley nodded. He didn't want to interrupt the man's flow. “Old William Cake ain't no ordinary shopkeeper. Fact is, he ain't
much of a shopkeeper at all. Ever seen any kids in that there sweet shop, 'ave yer? No, I thought not. Come to think of it, I bet you ain't seen nobody in there at all!”
“Why's that then?” inquired Stanley, his eyes growing bigger and rounder and his ears pricking up.
“People round 'ere are scared of 'im. They reckon old Cake has something of the night about him. Came to this village to try and settle down with a cozy little business and get rid of 'is nasty habits but found that he just couldn't shake it. Just can't help himself.”
“I'm so sorry, Mr. Flynn, sir, I just don't know what you're saying!” admitted Stanley.
“The man's a werewolf, lad. A creature of the night. Call it what yer want.”
“Do you mean â¦ are you talking about â¦ (he struggled to remember the word) â¦
lycanthropy
? The transformation of man into wolf under a full moon?” (Stanley was a mine of information on this subject. Back home he had read every book he could find, and he thought he knew all there was to know about werewolves.)
“Don't believe everything you read in books, lad. Books is bad for you.”
“What do you mean?”
“Tain't nothin' to do with full moons, lad. You been readin' too many fairy tales. Werewolves is brought on by nightfall. As sure as night follows day, that thing will prowl these moors and stalk this town, full moon or not.”
A grisly-looking landlord plunked another mug of ale on the table.
“In certain parts and places they are what darkness brings,” Flynn added. “I'm afraid, young man, that
this
is one of those places. Ain't yer seen those hairy arms with hands like shovels hung on the end? Ain't yer seen those eyes? That ain't normal.
“One minute he's a little old man with a bad back and a stiff leg, and in the next breath, he's down on all fours, racing through the night with teeth like razors.”
“How could you know all this?” asked Stanley, a huge lump in his throat. Although he found the story ridiculous, it somehow made sense of the things that troubled him. The emptying of the streets at sunset. The people in the watchtowers.
And of course, the grim death of poor old Admiral Swift.
“Tell you how, lad. 'Cos I seen it with my own eyes, that's how. You see that wrecked-up old boat on that there beach? That belonged to the biggest band of crooked rotten scoundrels that ever lived.
“Pirates, they was. Every last one of 'em. Came ashore late one night two years ago, drunk as newts, staggering about in the village square. Until they met old William Cake, deep in the middle of one of his funny turns. Bent double, full of hair with huge claws and saliva dribbling down his chin in a fevered hunger. Polished off the lot of 'em, he did. Well â¦ all apart from one, anyway.”
“Who was that?” inquired Stanley, his throat dry.
“Me!” said Flynn. He pulled up his shirt cuffs. A deep scar ran around both of his wrists. 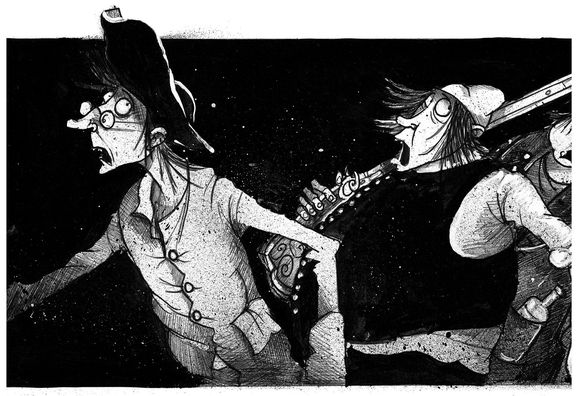 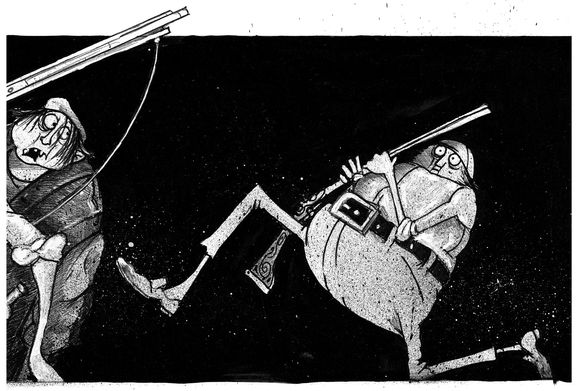 “Had to have these sewn back on,” he continued. “Took âem clean off, he did. I'm lucky to be alive.”
By now Stanley was shaking at the knees. “You, you're â¦ a pirate, and he's some kind of werewolf, you say.”
“Keep yer voice down, young 'un. The likes o' me ain't too popular round 'ere. They'll have me off this island before you can say crab soup, and I got plans to stay.”
“How do I know you're telling the truth?” asked Stanley, whispering.
Flynn's eyes sharpened and his nostrils flared. His face came closer again. Stanley
moved backward a little, wishing he hadn't opened his mouth.
“Don't just take my word for it, lad. Look around you. There's an awful lot o' clues about. This place is empty at night for a start. Nobody wants to stagger home drunk when there's wolves about. Don't tell me you haven't noticed that bell ringing at dusk, the streets clearing, the villagers in the lookout posts. Ain't yer seen all those sheep carcasses out on the moor? They weren't eaten by wild rabbits, y'know. There's a lady in the village, claims she shot a wolf one night, wandering about in the square. Next morning Cake was limping about like an old woman.
“And why do you think all the dogs have got missing legs? They're the ones that got away!” 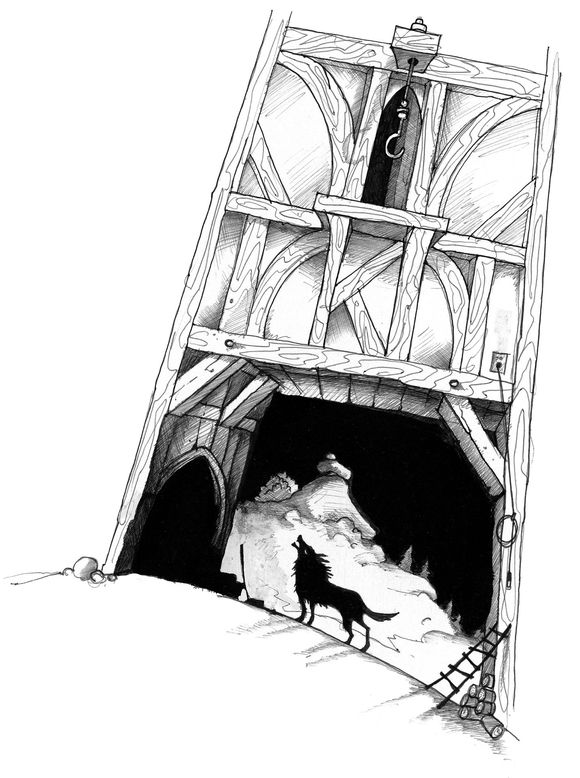 Just then Silver sniffed at Stanley's leg under the table and touched him with a cold wet nose. Stanley jumped so far he fell backward onto the floor. He made his excuses and left the inn. “Thank you, Mr. Flynn,” he said. “I'll see you again maybe.”
ADS
15.4Mb size Format: txt, pdf, ePub