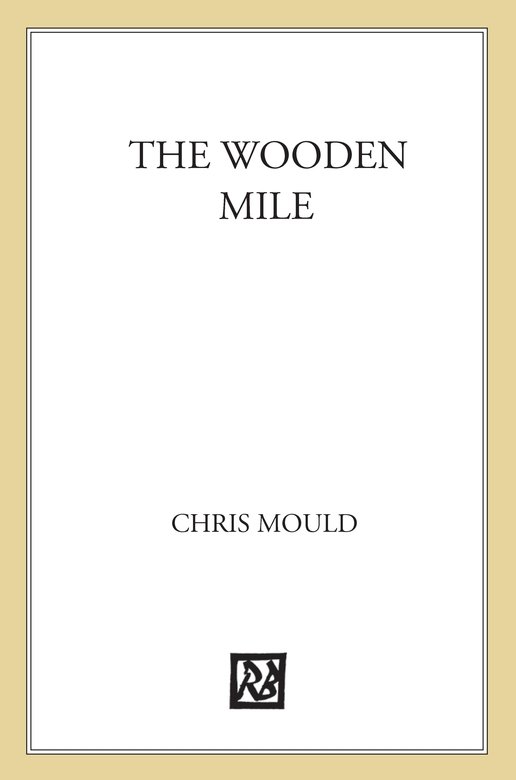 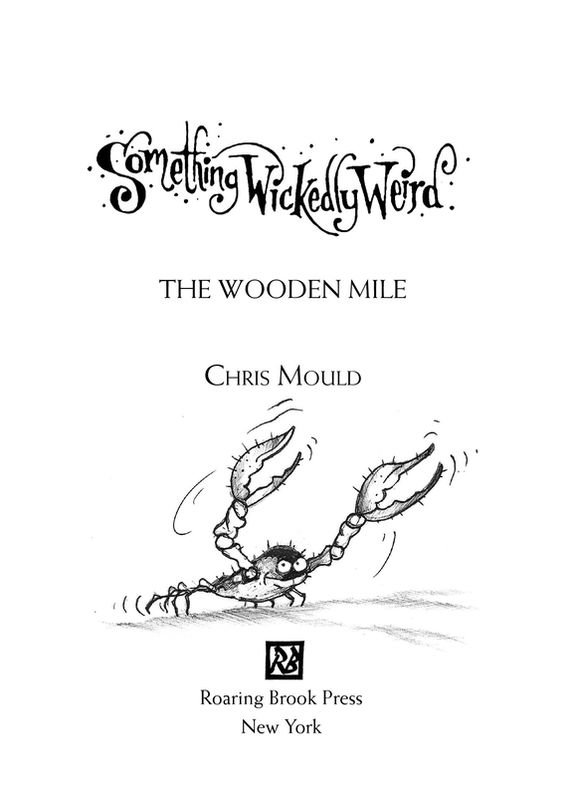 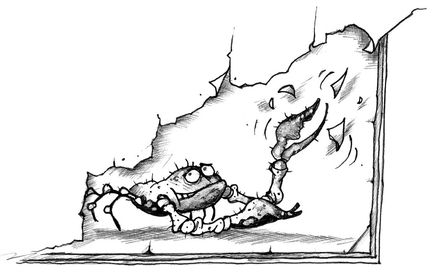 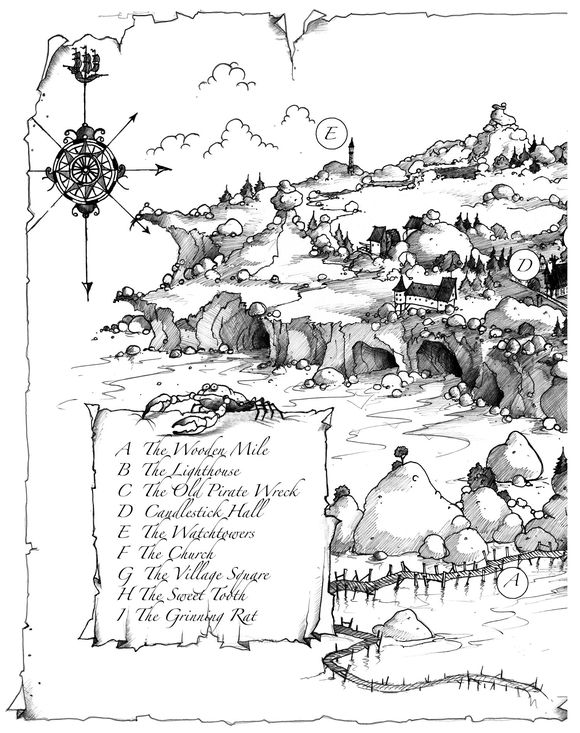 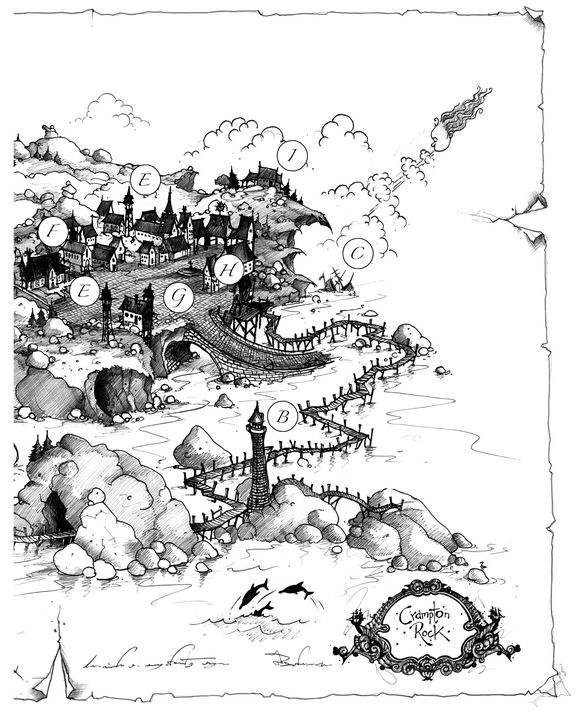 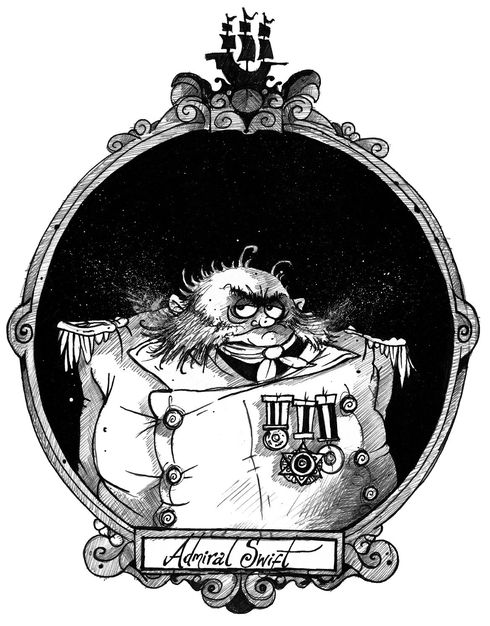 1
Along the Wooden Mile
I
n a darkened industrial town, someone weaves unnoticed in and out of the alleyways until he finds the right doorway and forces a package through its mail slot.
This is not the very start of the story. It is simply a convenient place to begin. And you should be warned that when you delve into what has already happened and what lies
ahead, you will find this a dark and twisted tale. Good fortune sits in wait around the corner, but grim misadventure lurks sneakily behind.
The package announced itself by landing heavily on the mat. It was addressed to Stanley Buggles. Inside was a short letter and a piece of folded cloth which, when unwrapped, revealed a large silvery-gray key. Not just any old key, mind you, but the key to a rusty, cobweb-covered old secret. A secret that wouldn't come out on its own but would need coaxing out of its cage like a frightened bird (as is often the way with secrets).
Stanley read the letter. He read it quietly to himself several times and then he read it out loud to the family who had gathered in the kitchen. No one could quite believe it, but there it was in black and white.
Then he held the key across both palms. 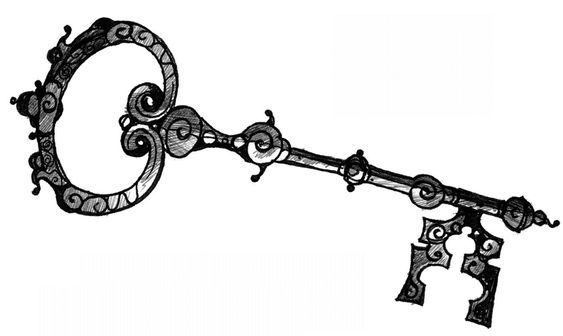 It was a strange-looking thing: big and bulky, like something that would open a castle gate, and yet intricately decorated with swirls and scrolls. He placed it back in the cloth, folded it tidily, and put it neatly back in the envelope with the letter.
Stanley Buggles. A sensitive little chap, his mother would say. A young wiry little fellow who could usually be found wandering the woods alone, climbing the gnarled old branches just to get a peek at a hawk's eggs,
or lying in wait in the undergrowth so that he might catch sight of fox cubs.
Like all mothers, Stanley's longed to protect him from the perils of the outside world, but she knew she couldn't keep him wrapped up forever. And anyway, he was no pushover. Oh, no. If ever a kid could look after himself, here he was. Stanley could box like a champ. A proper little jackrabbit he was, and like all true champs he had the heart of a lion, along with a mane of stringy blond hair.
And while he had sat one afternoon in the hollowed-out trunk of a tree watching a kestrel circle over an open field, somebody three hundred miles away had sat typing the letter that would change his life forever. 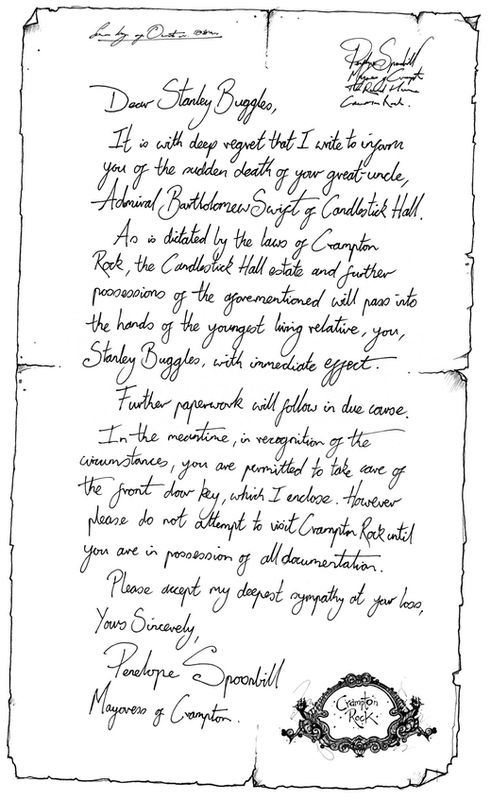 Now, first things first. Stanley had no knowledge of his relative, who was, in fact, the perfect example of a long-lost great-uncle. Except that now he was a
dead
long-lost great-uncle, which pretty much spoiled Stanley's chances of getting to know him.
It was decided, when the time came, that Stanley would go on his own to visit the house. His family were far too busy to accompany him at present, and he was far too excited to delay the excursion any longer. He would be put on the train by his mother, Marjorie, and his stepfather, Tristan Fletcher, and he would be met by the housekeeper, Mrs. Carelli, at the other end. She would be staying on at the house and would take care of Stanley during the summer.
Mrs. Carelli informed them that she would be standing on the platform at Crampton Rock station. Mr. Fletcher had described Stanley in his letter so that she might know him when she saw him. 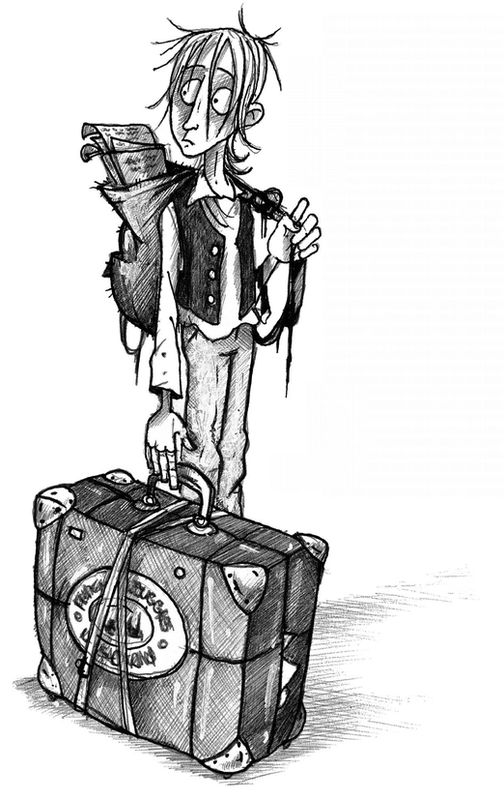 “He is eleven years old, with a pasty complexion and a skinny frame. He will most likely be carrying a large brown suitcase with the words Fletcher & Buggles Manufacturing
on the side and looking as if he doesn't know where he is going.”
“You can't miss him,” Mr. Fletcher had scribbled at the bottom of his letter, explaining that Stanley was “not really ready for such an adventure at all.”
But as things turned out, he was going to have one, and it was about to land on him with one enormous
THUD.
Â
Stanley stared through the window of the train's carriage. As the train thundered along the tracks, the whole world looked completely still. The sun blazed across yellow fields and Stanley wondered what the place would look like.
When the train eventually ground to a halt, Stanley could see a rickety handmade sign:
THIS IS CRAMPTON ROCK.
He looked
around. From what he could see, the place was deserted and consisted only of the small platform itself. Standing just in front of the sign was a stout woman with large ruddy cheeks and a ridiculous hat. Stanley knew this was Mrs. Carelli. It must be her, because there was nobody else.
Stanley jumped down from his seat. He had the strangest feeling that despite its dull appearance, there was going to be something very different about this place.
“You can't just get off here, lad. This is Crampton Rock. You needs written permission to get off at Crampton Rock. âTis the law of the land. Let's see your ticket.”
Stanley looked up to see a smug-looking train guard grinning at him. The ticket was in his hand. He held it up.
“I don't need written permission, sir. I'm a resident here. I own property. I have the paperwork.” It was the first time Stanley had ever said this. At his side, he was clutching a file of legal documents, which he had held on to for the whole journey. He waved them at the man, who eyed them suspiciously.
“Mmmmmm, go on then. I don't believe yer, but I'll let yer go this time.” He clipped the corner of the ticket without taking it from Stanley's hand and shuffled away.
As he wrestled his case down from the luggage rack, Stanley muttered under his breath, “I hope Mrs. Carelli is more pleased to see me!”
She was. Well, sort of.
“Hello, you must be Stanley,” she called when she saw him step off the train. “I'll be
looking after you at Candlestick Hall. We can talk later, but for now you'll have to rush along â¦ tide's coming in.” 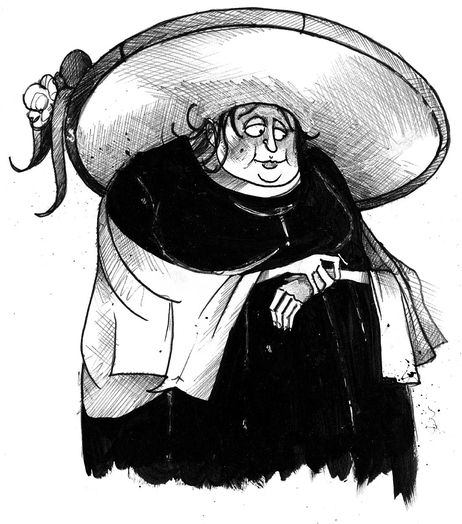 And before Stanley could say a word in return, she was walking away quickly on her little feet. Stanley followed on behind, dragging his suitcase awkwardly and wondering why the tide made any difference to anything.
As they walked out through the station exit, the ground in front of them suddenly disappeared. There was a sheer drop down to the sea. Dirt steps had been beaten into the earth and offered the only way down to the bottom. Right where the land met the water, there was a long, winding wooden footbridge that led, presumably, all the way out to Crampton Rock. It was hard to tell. There were several large rocks obscuring the view, and at one point the walkway disappeared through a cavelike opening.
“The Wooden Mile, we call it,” said Mrs. Carelli. “When the tide's right up it'll be gone.” The water was already dangerously close to the top.
ADS
15.4Mb size Format: txt, pdf, ePub