Read The World at War Online

The World at War 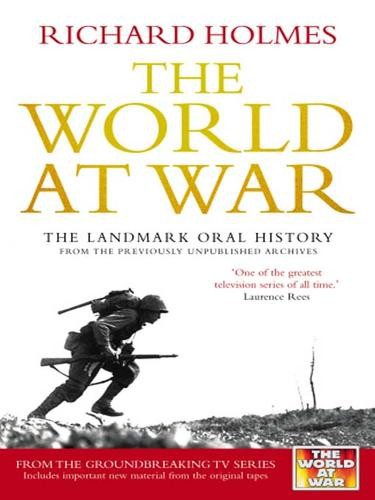 THE
WORLD
AT WAR

THE
WORLD
AT WAR

THE LANDMARK ORAL HISTORY
FROM THE PREVIOUSLY UNPUBLISHED ARCHIVES

Published in 2007 by Ebury Press, an imprint of Ebury Publishing
A Random House Group Company

Richard Holmes has asserted his right to be identified as the author of this Work in accordance with the Copyright, Designs and Patents Act 1988

Addresses for companies within the Random House Group
can be found at
www.randomhouse.co.uk

Designed and set by
seagulls.net

To buy books by your favourite authors and
register for offers visit
www.rbooks.co.uk

All film-makers shoot more footage than they use;
The World at War
was no exception. We always knew we had more good stuff than could conceivably be crammed into twenty-six hours of commercial
television – each 'hour' only fifty-two minutes, thirty seconds long, to be precise. We never kept a strict tally, but I'd guess the ratio of newsreel printed to that used was about fifteen to one; for interviews it was higher still, well over twenty to one. The first assemblies of strong, relevant material ran at over three hours; hard choices always had to be made to get each episode down to transmittable length.

We shot, from the outset, for the series and for the record. What was omitted was left, not on the cutting-room floor, but in the Imperial War Museum (IWM). Thames Television, at its all-round best the finest of the ITV franchise holders, sturdily footed the bill.

In a way, the money Thames spent was public money. The ITV companies, fifteen of them, enjoyed near monopolies, in their own areas, of television advertising revenue. In February 1971, after years of pressure, the government agreed to change the basis of the special levy on ITV franchises – the price they paid for their monopoly – from a tax on revenue to a tax on profit; their income would no longer be taxed at source. The condition was that the companies spend, and be seen to spend, more on programmes. I went at once to my bosses at Thames and suggested we make a history of the Second World War. A few weeks later, on April Fool's Day 1971, we started work. Our principal collaborator was the IWM; its director, Noble Frankland, our historical adviser. It was a condition of the contract that all the original footage we shot be deposited in the IWM's archive. There it has lain to this day.

The World at War's
key ingredients were the image and the word, newsreel and eye-witness interview. Music and narration held all together. Some programmes went short of pictures; there is little visual record of war at sea, or acts of resistance, or of genocidal gas-chambers. Those episodes relied on interviews. One episode, on Stalingrad, used no witnesses; no Red Army veterans would face the camera in 1972–73, at the height of the Cold War. But those were the exceptions. For the most part we reckoned to use newsreel and interviews, split fifty-fifty; so only about thirteen hours of interview made it to the screen.

Some voices are heard only for a moment. An American paratrooper, who dropped in France before the D-Day landing, tells us: 'I was afraid. I was nineteen, and I was afraid.' I hear him still.

Others, particularly the leaders, talked at greater length. What interviewer, researcher or producer, facing a Supreme Commander, a presidential aide, the Foreign Secretary, an SS General, could resist seeking an overview, a
tour d'horizon?
It might serve in several programmes, after all. As you read these pages, remember
The World at War's
interviewers; they did a fine job.

The World at War
took fifty of us three years to make: we talked to hundreds of survivors and printed a million feet of film. When it was finished – the final episode screened in May, 1974 – we made three lengthy specials from the ample surplus to hand. Then, the team broke up; each moved on to other things. Making
The World at War
took over our lives, but we never thought of transferring what we'd done to other media. Now, triumphantly, the voices we recorded speak again on the printed page. Rereading the transcripts today, I am impressed by how successfully, in skilled hands, they transfer to print; vivid, articulate, revelatory.

Television history is narrative history. Several interpretations of a strategic decision may be worth considering, but the film-maker must choose one, and stay with it. On the page, there is time and freedom to review the options. On complex issues, a wealth of opinion is easily displayed, and differing experiences related. In commissioning this oral history, Ebury Press has taken a visionary initiative. Richard Holmes has done a superb job of selection, and of organising the mass of material. On many topics he presents a broader and more nuanced account than did TV's linear narrative. His book deserves a vast readership. I salute him.

Jeremy Isaacs describes the making of The
World at War
in
Look Me in the Eye: A Life in Television,
published by Little Brown 2006.

I always rather dislike being called a television historian, preferring to see myself as an historian who enjoys talking about his subject: in that sense, at least, television, books and lectures are simply different parts of the same process. Yet there is no doubt that I am exactly of an age to have been profoundly influenced by television history. The BBC series
The Great War
appeared in my last year at school, and I can well remember watching some of its episodes on a tiny television in the worn and fusty setting of a house-room at my boarding school. It introduced the real complexities of its subject to an audience that either knew nothing about the war or had accepted at face value some of the more egregious comments that then passed for fact. Despite the best endeavours of Dr Noble Frankland, then Director of the Imperial War Museum (whose generosity in reducing the charges that the museum might otherwise have charged for copyright material had made the series possible in the first place), it took some extraordinary liberties with its use of visual images, blurring the boundaries between reconstructed and actuality sequences. It nevertheless deserves the much overused description 'landmark', and, as Dr Frankland has written, 'it launched the idea of history on screen'.

In 1973, almost a decade later, when I was in the early stages of my career as a military historian, pecking away at my doctoral thesis with the one-finger typing that kept the makers of Tipp-Ex in profits, the Thames Television series
The World at War
appeared. I was captivated at once. The poignant rise and fall of Carl Davis's music; the montage of extraordinary facial photographs in the pre-title sequence, each successively burned away to reveal another, like pages of an album seared by heat, and the mellifluous enunciation of Laurence Olivier, all had me enthralled even before I had properly watched a single episode. Once I began to watch, I was hooked. The breadth of the 26-episode series, shaped and sustained by the directing brain of Jeremy Isaacs, the series producer, was simply breathtaking. This was no narrowly Eurocentric story, but just what its name implied, the Second World War from background to legacy, and from the freezing waters of the North Atlantic through the sands of the Western Desert to the jungles of Burma. What struck me then was the remarkable quality of the eyewitnesses who had been interviewed, and the way in which the words of the men and women who had 'fought, worked or watched' were put at the very centre of the television treatment. For instance, I shall never forget hearing Christabel Bielenberg, a British woman married to a German lawyer, describing the rise of Hitler: suddenly the events of 1933–36 were not something that had happened long ago and far away, but a personal story being told by a familiar voice. She was to call her book
The Past is Myself,
and reading the
transcripts of her interview I see how apt that phrase is, and just what an impact personal accounts like this have had on my own development as a historian.

Looking at the series when it was first screened I was struck by its success in gaining access to so many men and women who had seen the wider picture, and having now had access to the full range of interviews, I am even more impressed. To select a few names, almost at random, there are the words of John Colville, Churchill's urbane and perceptive Private Secretary; Hasso-Eccard Freiherr von Manteuffel, one of the most successful practitioners of armoured warfare; Vera Lynn, 'The Forces' Sweetheart', whose songs caught the mood of Britain at war; 'Manny' Shinwell, veteran Labour politician; Francis de Guingand, Montgomery's Chief of Staff; Albert Speer, Hitler's architect turned Armaments Minister, with his insider's view of power politics in the Third Reich, and two of the apostles of air power, Arthur Harris of the RAF's Bomber Command and Curtis LeMay of what was then still the United States Army Air Force.

But of course this was not a series that concentrated on 'captains and the kings'. There were many ordinary men and women too – American, British, Canadian, German, Japanese – telling us about the extraordinary times they lived through, and who, but for their necessarily brief appearances, might otherwise have left no mark on history. A mother describes the death of her children in an air-raid shelter, a rescue worker tells of holding a teenage girl's hand as she choked to death, and a Merchant Navy officer catalogues the deaths of his crew in an open boat in the Atlantic. There are moments of quite extraordinary and sometimes shocking intimacy. One interviewee reflected on Neville Chamberlain's 'deadly decency'; another remembered how Stalin looked like 'a most cunning and cruel peasant' when seen across the table, and a Singapore veteran saw the first Japanese soldiers, 'extremely tired men, grim-visaged', enter the city.

Milo Talon by Louis L'Amour
FinsFantasy by Jocelyn Dex
The Push: A Sequel to The Pull by Sara V. Zook
Private L.A. by James Patterson, Mark Sullivan
The League of Night and Fog by David Morrell
Cunningham's Encyclopedia of Wicca in the Kitchen by Scott Cunningham
Wacousta by John Richardson
Like Jake and Me by Mavis Jukes
Pivot Point by Kasie West
The Heart Does Not Bend by Makeda Silvera