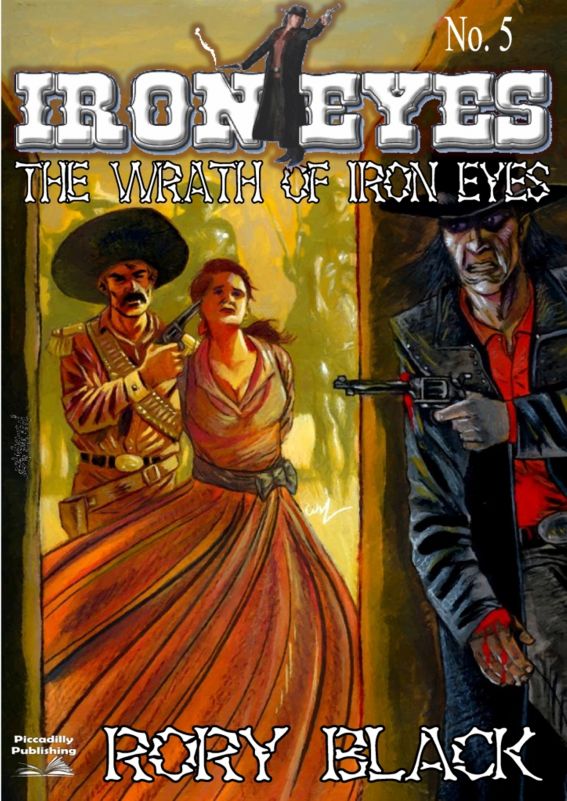 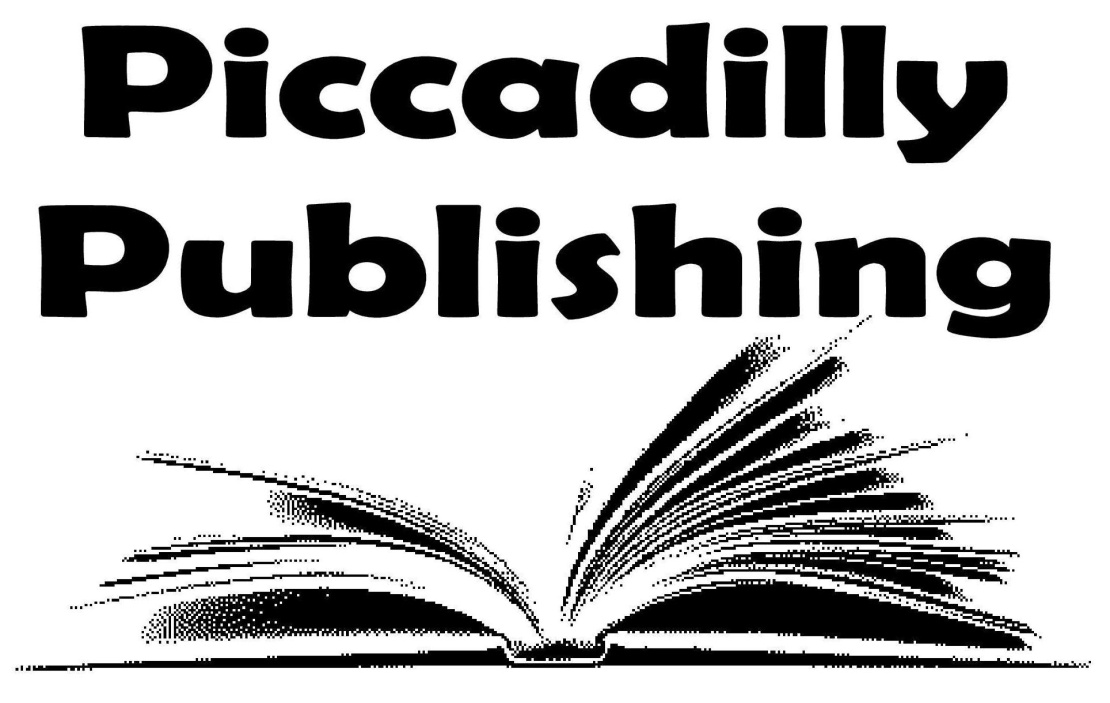 Issuing new and
classic fiction from Yesterday and Today!

The notorious but disfigured bounty hunter
Iron Eyes merely hunted men for the price of their head and then
killed them without compunction. But when he encounters the
beautiful daughter of a banker, he finds a woman who does not turn
away from his horrific appearance. Riding after yet another outlaw,
Iron Eyes is attacked and wounded by Indians. He then discovers
that Mexican bandits have kidnapped the banker’s daughter and so,
barely alive, he uses his unique hunting skills to track the
villains . . . 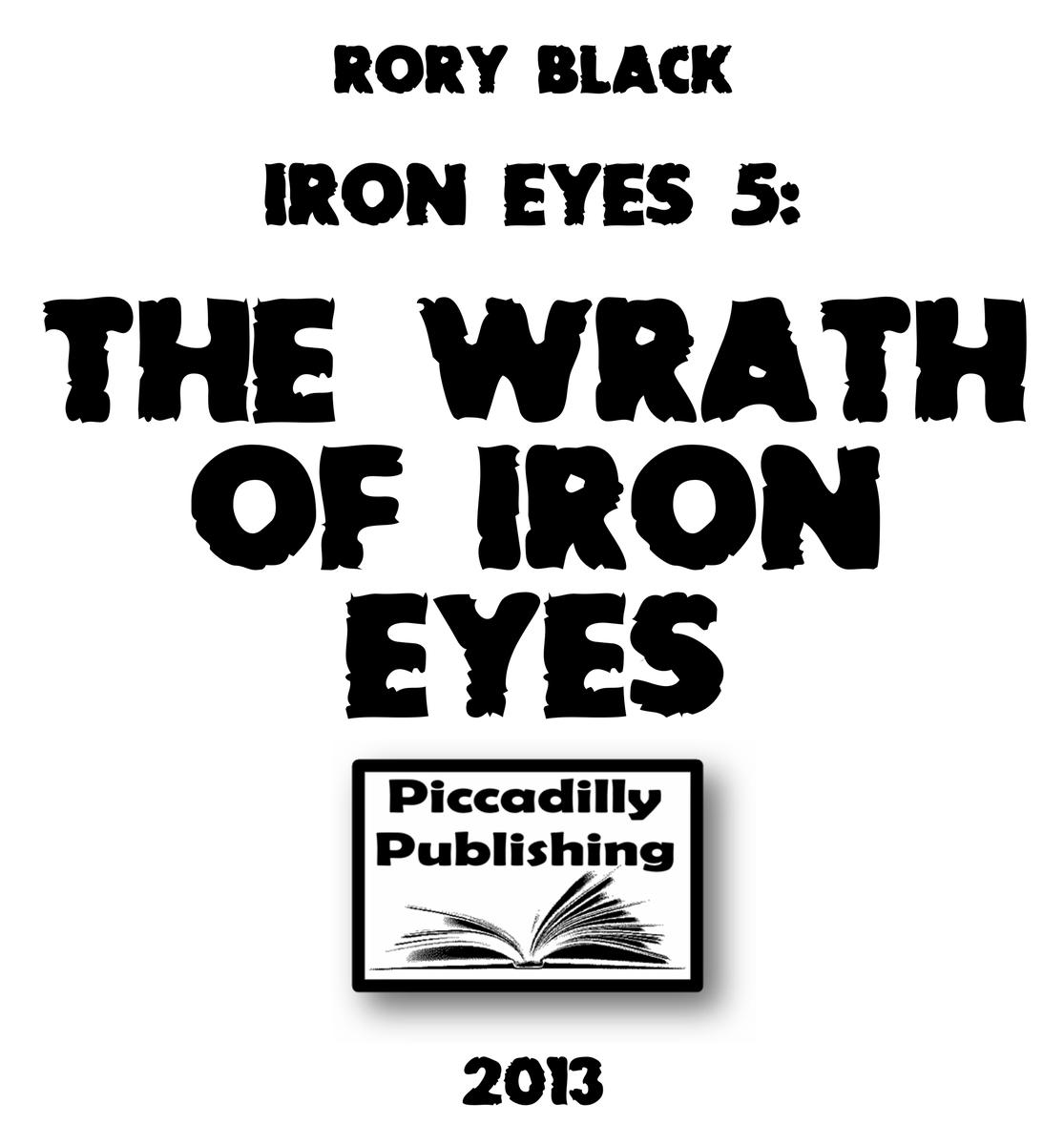 THE WRATH OF IRON
EYES

Names, characters and incidents in this book are
fictional, and any resemblance to actual events, locales,
organizations, or persons living or dead is purely
coincidental.

This ebook is licensed for your personal enjoyment
only. This ebook may not be re-sold or given away to other people.
If you would like to share this book with another person, please
purchase an additional copy for each reader. If you’re reading the
book and did not purchase it, or it was not purchased for your use
only, then please return to Smashwords.com and purchase your own
copy. Thank you for respecting the hard work of this author.

Published by
Arrangement with the Author.

Dedicated with thanks to the world’s finest
comic book artist, my friend Bill Black

The cruel storm had started just before
sundown. By the time darkness had overwhelmed the bounty hunter, he
was drenched to the bone. The lightning flashes above the desolate
range gave the grim rider brief glimpses of his prey. But never
long enough or close enough for Iron Eyes to pick him off.

It was like trying to catch the lightning
itself, but Iron Eyes refused to quit. He had invested too much
time to even consider stopping his relentless pursuit.

Every few minutes the narrow, cold steel
eyes spotted the fleeing rider as forked lightning splintered from
the sky and found something on the ground to strike. Rain poured
down mercilessly, stinging the hide of the bedraggled pony and its
determined master, who refused to give up.

It felt to Iron Eyes that he had incurred
the wrath of the very elements themselves as he drove the spent
pony on and on knowing the man he was hunting had a far superior
animal beneath his saddle. But this did not stop his attempt to
gain ground on the horse-thief he had been tracking.

Then Iron Eyes felt his mount
stumble and knew that if he were to catch up with the man he was
chasing, he had to allow the pony to rest for a few minutes. Iron
Eyes drew in his reins and sat astride the exhausted animal,
watching the black horizon for clues to where his prey had gone.
For more than five minutes the bounty hunter waited for another
flash of lightning to illuminate the scene.
Then it was as if the heavens
had declared
war on the very earth beneath it. Bolts of white lightning
carved twisted routes
down out of the clouds above him. Cactus
and joshua trees
took the full impact of
the electrical strikes, exploding into
flames
all
around the mounted rider until the ceaseless rain extinguished
them.

Suddenly the pony jolted in terror as Iron
Eyes gripped his reins firmly in his bony hands and fought to
maintain control of the skittish animal.

Only when the pony collapsed beneath him and
he hit the ground did Iron Eyes hear the sound of the rifle shots
above the deafening roar of the thunderclaps.

He rolled away from the horse and drew both
his pistols from his belt. As light flashed across the prairie
again he saw his quarry firing directly at him from atop a ridge.
Bullets flashed over the dead horse, narrowly missing the bounty
hunter. Iron Eyes blasted both his Navy Colts at the horse-thief
but his shots were short of range.

The wet ground splashed all around Iron Eyes
as the bullets of the horse-thief s Winchester tried to kill his
hunter as neatly as it had finished off the pony.

Iron Eyes threw himself down
next to the dead animal and tried desperately
to pull his own rifle from its
scabbard beneath the saddle. It was no use, the carbine was trapped
under the full weight of the stricken horse.

Another volley of lead hit the carcass of
the pony. Iron Eyes kept down behind its bulk and gritted his
teeth. He knew that unless the rider came within range of his
trusty pistols, there was no way he could kill the outlaw.

But although Ben Drake was a skilled
horse-thief and a reasonable shot, he was also not stupid. There
was no way he was going to ride into the range of the Navy
Colts.

As another flash of lightning
lit up the scene, Iron Eyes watched the rider turning his
dapple-gray mount
around and then ride off into the darkness.

Iron Eyes rose to his feet and stared
through the driving rain at where he had last seen the elusive Ben
Drake. Without a second’s hesitation, the long-legged man unbuckled
his saddlebags from the dead pony, tossed them over his shoulder
and started to walk after the outlaw.

He had no idea how far it was to the next
town, but he knew that Drake would go there and feel confident
enough to stay, knowing that the one man who had dogged his trail
for so many days was on foot out on the range.

After only a few minutes of walking through
the pouring rain, Iron Eyes started to increase his pace until he
was no longer merely walking.

As the sky mocked his every stride, Iron
Eyes continued running into the unknown. He knew that it was only a
matter of time before he would catch up with the man he was hunting
and claim the reward.

Horse-thieves were wanted dead or alive and
that suited Iron Eyes just fine.

Ben Drake had a bounty on his head. A bounty
that Iron Eyes had already determined would be his.

Lightning forked down viciously from the
angry heavens and rain continued to fall, and there was no
sanctuary for the man who had been hunted to the small remote town
by the legendary bounty hunter.

Even darkness could not
disguise the sheer power of the tall, emaciated figure who clutched
the grips of his matched Navy Colts firmly in his skeletal hands
and stood watching the busy saloon. Iron Eyes stood like a statue
in the centre of the wide street totally unaware of the rain that
had been pounding down for more than three hours. But Iron Eyes had
only been in the small border town of Cripple Creek for a mere ten
minutes. He had informed the sheriff of his intentions and then
wandered through the rain until he had located the Blue
Garter saloon. This
was the last saloon within the small six-street town.

With the tails of his long
trail coat swaying in the evening breeze. Iron Eyes chewed on the
end of his long-extinguished cigar and brooded. Spotting the
distinctive
dapple-gray mare tied up outside the noisy saloon, the
bounty hunter suddenly knew that his prey was within spitting
distance of his guns.

So close Iron Eyes imagined he could smell
him.

Countless people had passed by the tall
lethal figure, yet he had paid them no heed. He had only one
thought in his mind and that was to kill the outlaw he knew was
oblivious to his presence in Cripple Creek.

He had travelled fifty miles to
administer his own brand of justice and lay claim to the
one thousand dollar
reward money. Nothing but the price on the head of horse-thief Ben
Drake could end this now.

Iron Eyes’ long wet hair was
hanging
lifelessly over his scarred features as the relentless rain
beat down upon him. But he was like a puma stalking its next
victim. He had his prey’s scent in his flared nostrils and only
death could stop him from completing what he had started a few days
earlier.

The Wanted poster had said Dead or Alive.
That was all the information Iron Eyes required to unleash his
fury. Dead meant dead.

There was no other way.

His bony thumbs pulled back the hammers of
his matched pistols until they locked fully into position.

Ready to kill Ben Drake and anyone else who
got in his way for that matter. Blood was his signature and he had
signed his name throughout the West. Few lawmen ever questioned the
tall bounty hunter before, during or after he had unleashed his
venomous weaponry. If innocent people got killed whilst he was
dishing out his lethal lead, nothing was ever said.

He was a law unto himself.

The tall ruthless bounty hunter strode
across the muddy street and stepped up on to the boardwalk. He
paused and stared over the swing-doors into the brightly
illuminated bar room. He studied each of the men who were drinking
and gambling with a coldness that was unique to the man known as a
living ghost.

Then he recognized a face from the Wanted
poster he had neatly folded in one of his deep pockets. The man was
wearing a damp top coat and was seated near the back of the long
bar next to a carpeted staircase.

Iron Eyes entered the saloon silently. Only
his bloodstained spurs made any noise whatsoever. They jangled like
the ominous knell of death.

The bounty hunter walked
through the crowded room towards his goal. As he passed by the
saloon’s customers, every
one of them stopped talking.

They had never seen anything remotely like
this grisly apparition before.

By the time the bounty hunter had reached
the round card-table where Drake was seated, the room was totally
silent. Every soul within the Blue Garter just stood watching to
see what the stranger in the long bloodstained coat would do next.
They all gave a sigh of relief when they realized that it was not
they whom the man with the Navy Colts in his hands was seeking, but
Drake. It was if they were afraid to even breathe in Iron Eyes’
presence, for fear of his deadly retribution.

The horse-thief looked up from his
beer-glass and felt his jaw dropping until it touched his bandanna.
Steam rose from Iron Eyes as if he were about to burst into flame.
Drake gulped at the image that was glaring down at him through the
strands of wet, dripping hair.