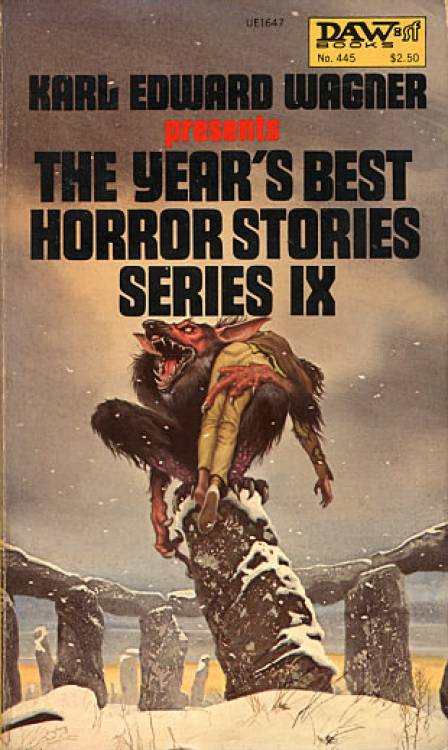 . . . Back he swung in flight along the gallery, but this time he took the other way, making for the reading-cabinet at the end. He floundered in exhausted and slammed the screen door after him. Once in, he knew how futile this move was; there was no way out.

Already the hideous face was looking through the open woodwork at him. With nightmare fascination he watched it craning its gaunt head about as though blind, then squeeze between the carved foliage, straining its quivering legs against the sides. By some uncanny sense it came straight for him as he stood transfixed. It fastened on him without haste and though he raised his arms to beat it off, they fell limply down again and left him to his fate.

A fiery glow suffused all vision now as he felt the bristling tendons on his chest and saw the ghastly proboscis nosing up for his throat
. . .

The Monkey
by Stephen King. Copyright © 1980 by Stephen King for
Gallery,
November 1980. Reprinted by permission of the author and the author’s agent, Kirby McCauley Ltd.

The Cats of Pere LaChaise by
Neil Olonoff. Copyright © 1980 by Editions MSGD for
A Touch of Paris,
June 1980 (under the title, “I’ll Tell Her You’ll Be Late for Dinner”). Reprinted by permission of the author.

The Propert Bequest
by Basil A. Smith. Copyright © 1980 by Stuart Schiff for
The Scallion Stone.
Reprinted by permission of the author’s agent, Kirby McCauley Ltd.

On Call
by Dennis Etchison. Copyright © 1980 by Paul C. Allen for
Fantasy Newsletter,
March 1980. Reprinted by permission of the author.

The Catacomb
by Peter Shilston. Copyright © 1980 by Rosemary Pardoe for
More Ghosts & Scholars.
Reprinted by permission of the author.

Black Man With a Horn
by T. E. D. Klein. Copyright © 1980 by Arkham House Publishers, Inc. for
New Tales of the Cthulhu Mythos.
Reprinted by permission of the author and the author’s agent, Kirby McCauley Ltd.

The King
by William Relling, Jr. Copyright © 1980 by Dugent Publishing Corp. for
Cavalier.
February 1980. Reprinted by permission of the author.

Footsteps
by Harlan Ellison. Copyright © 1980 by The Kilimanjaro Corporation for
Gallery,
December 1980. Reprinted by permission of and arrangement with the author and the author’s agent, Robert P. Mills, Ltd.

Introduction:
The Year of the Anthology and Beyond
by KARL EDWARD WAGNER

The year past, 1980, will go down in the annals of horror literature as the year of the blockbuster original anthology. One has to go back to those thousand-page super-dreadnought-class horror anthologies published in England during the 1930’s—particularly those edited by John Gawsworth—to find a comparison.

Most visible was
Dark Forces
, edited by Kirby McCauley, a finely produced 550-page hardcover volume containing 23 stories by major authors, published by The Viking Press in the U.S. and by Macdonald in England. Less opulent but a far better value was Ramsey Campbell’s two-volume paperback anthology,
New Terrors
, offering 37 original stories crammed into 670 pages. This was published by Pan Books in England; regrettably there has not yet been a U.S. edition, but on the brighter side there has been talk of continuing
New Terrors
as a series. The avowed intent of both of these anthologies was to showcase the cream of today’s horror fiction—the genre’s top writers creating
contemporary
tales of terror. How often and how well they succeed in achieving that is something each reader will enjoy deciding for himself.

Against these two shelf-benders, the other original horror anthologies of 1980 might well be unjustly overlooked. Charles L. Grant has edited
Shadows 3
for Doubleday—a collection that maintains the same level of his previous two entries in the series. Pan Books published
The 21st Pan Book of Horror
, edited by Herbert van Thal, which unfortunately maintains the level of that long-lived series. Perhaps best of 1980’s crop of original anthologies was
New Tales of the Cthulhu Mythos,
edited by Ramsey Campbell for Arkham House. Instead of the inept and amateurish Lovecraftian pastiches one might have expected (Douglas E. Winter has pointed out in a review that “Cthulhu Mythos” has been given a pejorative connotation in recent years), Campbell asked his authors for (and for the most part received from them) genuinely original and intelligent contemporary interpretations of the underlying concepts of Lovecraft’s synthesis.

Roy Torgeson edited
Other Worlds 2
and
Chrysalis 7
for Zebra Books—evidently the last for Zebra, as the series will now be published by Doubleday. From Berkley came the first two volumes of
The Berkley Showcase
, edited by Victoria Schochet and John Silbersack. Fantasy anthologies offering part original and part reprint fiction included
Mummy!
edited by Bill Pronzini,
Basilisk
, edited by Ellen Kushner, and
The Phoenix Tree
, edited by Robert H. Boyer and Kenneth J. Zahorski. Ostensibly science fiction but not entirely without interest to the horror fan were
Interfaces
and
Edges
, both edited by Ursula K. Le Guin and Virginia Kidd, and the continuing paperback series,
Destinies
,
New Dimensions
, and
Stellar
.

If it was a good year for original anthologies, it was a grim year for magazines. Two of the few surviving newsstand science fiction and fantasy magazines,
Galaxy
and
Fantastic
, published their final issues in 1980, as did a promising newcomer,
Galileo. Galaxy
had been around since 1950;
Fantastic
since 1952. For those fans who, like myself, discovered imaginative fiction through reading these magazines back when
they
were the bright new publications in the field, it’s a sad feeling. Of the Golden Age pulps and Atomic Age digests, now only
Amazing, Analogy
and
The Magazine of Fantasy and Science Fiction
survive. Not all is gloom on the magazine front: 1981 promises the debut of
The Twilight Zone Magazine
as well as yet another reincarnation of
Weird Tales
.

The lively world of the amateur press continues to furnish us with what is perhaps the best new writing in horror fiction. These publications run the gamut from the crudely produced fanzines, which pay their contributors with a free copy or two, to the most lavish of the semi-prozines (amateur magazines that pay competitive rates for material but lack newsstand distribution), whose production values far outstrip those of the prozines (magazines you can find on your newsstand, if you’re lucky).

Theirs is a fast-changing scene. Two of the best have ceased publication—
Midnight Sun
and
Copper Toadstool.
Two others long at the top of the field—
Whispers
and
Weirdbook—
did not have an issue during 1980 but promise to return in 1981.
Fantasy Tales,
Britain’s top semi-prozine, had its sixth issue in 1980, and was joined by a new countryman,
Fantasy Macabre.
The British Fantasy Society continued to publish
The B.F.S. Bulletin,
expanded under new editor Carl Hiles, as well as
Dark Horizons,
its literary journal. Stephen Jones and David Sutton, editors of
Fantasy Tales,
published
Airgedlamh,
a beautifully produced fantasy magazine brought out as a posthumous tribute to its editor, Dave McFerran, whose untimely death cost fandom one of its brightest stars.

As I said, the amateur press field is a lively one—and just as active outside the United States. Well, you can’t tell the players without a program, and fortunately for the fantasy fan there
is
a program:
Fantasy Newsletter
(which itself publishes an occasional story) is a monthly magazine that keeps fans up to date on all that’s happening within the fantasy genre. Subscriptions to
Fantasy Newsletter
are available from Paul C. Allen at P.O. Box 170A, Rochester, New York 14601. For those fans not fortunate enough to live close by a well-stocked science-fiction and fantasy bookstore, two established specialty dealers who issue regular catalogs are Robert Weinberg (15145 Oxford Drive, Oak Forest, Illinois 60452) and J. S. Hurst (P.O. Box 236, Vienna, Maryland 21869).

And so from the year of the anthology we come now to the anthology of the year,
The Year’s Best Horror Stories: Series IX
, presenting the best of the best from 1980’s bumper crop of horror fiction. The selection is never easy; in addition to everything else it demands a good bit of luck and not a little presumption. In selecting these stories I have tried to read all eligible material from this past year—basing my choices without regard to taboos or to story length, considering each story on its own merits without regard to the renown of the author or the prestige of the original publication. Some of these stories follow traditional guidelines, others reinterpret these patterns or move off to establish new models. My definition of horror fiction is a broad one, without quibbling over the various genres and subgenres. Most of these stories are fantasy, some are not; they all convey a convincing mood of fear.

Because a horror story asks its readers to accept as truth certain facts which the reader knows are contrary to the ordered universe (as he has been led to believe it exists), it is absolutely imperative that the author
convince
the reader of the reality within his story. Catsup isn’t blood no matter how liberally it’s spattered. Rubber monsters aren’t frightening no matter how many fangs and tentacles. Cardboard sets and wooden characters don’t scare us for all the cobwebs and screams. If you don’t believe it, you aren’t frightened.

These authors have brought all their considerable talents to bear for the purpose of convincing you, of frightening you. And they
will
frighten you. Believe me.

THE MONKEY
by Stephen King

One of the bright spots for horror fans during the 1960’s was a series of shoddily produced magazines edited by Robert A. W. Lowndes for something called Health Knowledge, Inc. Longest running of their several titles were
Magazine of Horror
and
Startling Mystery Stories;
for the most part they reprinted otherwise inaccessible stories from sources such as
Weird Tales
and
Strange Tales
—with an occasional original story, usually unreadable, by someone you’d never heard of. Ramsey Campbell, already with one book to his credit, was one of these obscure writers, and another was Stephen King, who sold his first two stories here (for a combined total of $65).

Estudio en Escarlata by Arthur Conan Doyle
My Brilliant Career by Miles Franklin
Will's Rockie Way by Peggy Hunter
Doubting Our Hearts by Rachel E. Cagle
A Taste for Murder by Claudia Bishop
Walking in Darkness by Charlotte Lamb
Saved By A Soldier (Love Conquers Life Book 1) by Alison Mello
A History of the Crusades-Vol 3 by Steven Runciman
War on the Cimarron by Short, Luke;
The Starshine Connection by Buck Sanders