Speer went for the one on the right, who
’
d been ducking behind the wall for cover. His revolver was empty. He grabbed her rifle barrel as she tried to level it and brought his own gun smashing against her temple, continuing to rain down blows as she fell to the deck.

The one on the left was the shooter whose gun had pinged
—
when I came on her, she
’
d been reloading.

Through the slit in the fabric covering her face, I saw her wide green eyes. Then I put a bullet into one of them.

I looked over at Speer as he pulled off the mask covering his shooter
’
s face.

She was white and no older than twenty, with a sprinkling of freckles over a nose that, until Speer had shattered it, was no doubt cute. Her hair, once dirty blonde, had been stained an absolute red by the blood coming from her mouth, nose and ear. Her eyes stared up at the ceiling dead and unseeing.

I searched their bodies quickly for more weapons we might be able to use, but they
’
d only had the rifles.

Speer grabbed both of the rifles, slung one over his shoulder, and held the other at the ready.

“
The airship
’
s bridge will be this way,
”
he said, and we rushed through the mess area and a kitchen. We passed doors as we ran
—
bunks and storage closets, probably
—
and I wondered if someone might be hiding behind them. I did my best to keep checking behind us to make sure we weren
’
t ambushed.

We came to the bridge, its large, panoramic windows looking out onto Boothcross. The southern Faced Tower
’
s sculpted head was huge and close. There couldn
’
t be a minute or two left before we smashed into it.

In front of the ship
’
s wheel and levers was Mohammad Talib. I could barely see him because he was crouched behind a white woman, holding a knife to her throat.

“
Stay back!
”
he shouted. The woman screamed and struggled weakly, a fistful of her hair in Talib
’
s hand.

“
Not to worry,
”
Speer said as he opened fire. His rifle quickly blew four holes through the woman and into Talib. Both fell to the deck in a heap, blood everywhere.

“
Why did you do that?
”
I shouted. I
’
d been to the scenes of execution-style homicides. The casual coldness of those murders is their most striking feature. You can tell right away that whoever did it had something missing, some key ingredient that makes us fully human.

I suddenly saw the same absence of humanity in Hiram Speer. It made me wonder if the Steamies in the Tower were worth saving. After all, they
’
d chosen a monster like him to be their guardian.

Speer quickly checked to make sure Talib was dead before rushing to the controls.
“
Tunnel vision is a cardinal sin, Hoff. In the corner, there
’
s a pile of black clothing. No doubt her religious garb. She was one of
them
.
”

I looked and saw that he was right. Relief washed over me. But it quickly dissolved in the face of the rapidly approaching Faced Tower.

“
Dammit
,
”
Speer
said
.
“
The Arab bastard broke the lateral controls. We can
’
t just gain altitude and sail over the Towers.
”
We couldn
’
t have been more than a quarter-mile from the Tower
—
it was enormous, filling our wide windows.

Speer turned the wheel hard to the right while throwing a lever. I heard the engines stopping, but we were still moving forward. Another lever thrown, and painfully slow, the ship began to turn.

“
Come on, dammit
,
”
Speer said, leaning into the wheel with all his weight as it shook in his hands.

It was hard to gauge our true distance since the front of the
Highwhale
’
s rigid structure extended about a hundred yards forward of the gondola. But we were closing too fast
—
no doubt about that.

Finally the airship began to break hard to the right.

“
We will,
”
he said, his face red, willing the ship to change course.

The
Highwhale
began to turn more swiftly. In the rightmost part of the control room
’
s windows, I could see open sky.

Finally, the turn was almost complete, all of the forward windows clear of any buildings.

Then there was a terrible rumble and screech from above us.

“
Just grazing it with the outer hull,
”
Speer
said
.

Seconds later, the screeching and rending of metal stopped.

The sudden silence was unreal. The engines were dead, and we were now simply drifting in the night sky. The only sound was the low buzz of our pocket-zep still pulling at the airship.

My senses finally focusing on things that didn
’
t present an immediate threat, I noticed the outfit of the woman Speer had shot. She was wearing overalls, like a mechanic. Stitched into the material was an emblem for the Blue Cliffs Industrial Airship Yard.

He saw me looking at her.
“
Despite what you probably think,
”
Speer
said
,
“
some women do have careers here. She must have been the one driving the airship. That
’
ll teach the equality fetishists to be more circumspect when hiring.
”

I knew I should defend my gender. It was another disgusting comment that should be roundly contradicted.

Yet somehow I didn
’
t have the heart. Bodies and blood were everywhere. It was horrible. But we
’
d won. Killed the bad guy, while spitting in Death
’
s face. Adrenaline washed over me, and I felt alive
—
more alive than I
’
d ever felt before.

Feeling like that, I just didn
’
t want to worry about what I should think or the appropriate thing to say. It was a strange sensation, letting go of all that. Strange, but not bad.

And it felt good to be around someone so confident. Speer still looked stylishly disheveled.

Looking through the control room door, I could see clear into the mess room. There were some couches there.

Speer remained at the helm.
“
Not to worry
—
we
’
ll bleed hydrogen from the gasbag.
”

“
Well
, no
hurry
.
”
I eased up close to him.
“
You know, if this were the end of an American action movie, the hero and heroine would probably have wild sex on one of those couches,
”
I said suggestively. Our bodies almost touched.

“
And if it was a Steam Pointe novel
’
s
conclusion
,
”
he replied,
“
our hero would politely let the foreigner know he
’
s only interested in ladies, not women that have probably been passed around by more men than pocket change.
”

My mouth fell open. I was speechless.

There’s nothing I like better than connecting with readers. So if this story, the first installment of Series Hero’s ongoing
Steam Pointe
adventure series, clicked with you, I'd appreciate your sharing that with me and others by way of a review.

Meanwhile, if you’d like to keep up with my fiction (and get a free eBook from my
Nightfallen
series as well), you can sign up for my occasional update letter by clicking the image below. Please also feel free to reach out via email—you can write to me at [email protected] Thank you again for reading.

Sign up for my newsletter and get a free copy of
Going Dark
, the first installment of the
NIGHTFALLEN
horror series 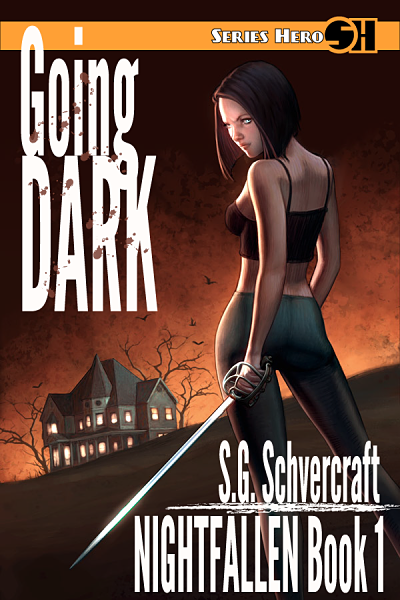 The Tesla Gate: A SciFi Short Story by Drew Avera
Alone With You by Aliyah Burke
Valentine's Exile by E.E. Knight
Dark Needs (Tales of Dystopian Decadence Book 1) by Finley Blake
Whats Your Pleasure by Marie Haynes
Bound to Me by Jocelynn Drake
Circle of Evil by Carolyn Keene
Seas of Ernathe by Jeffrey A. Carver
Burn (Story of CI #3) by Rachel Moschell
Thousand Cranes by Yasunari Kawabata