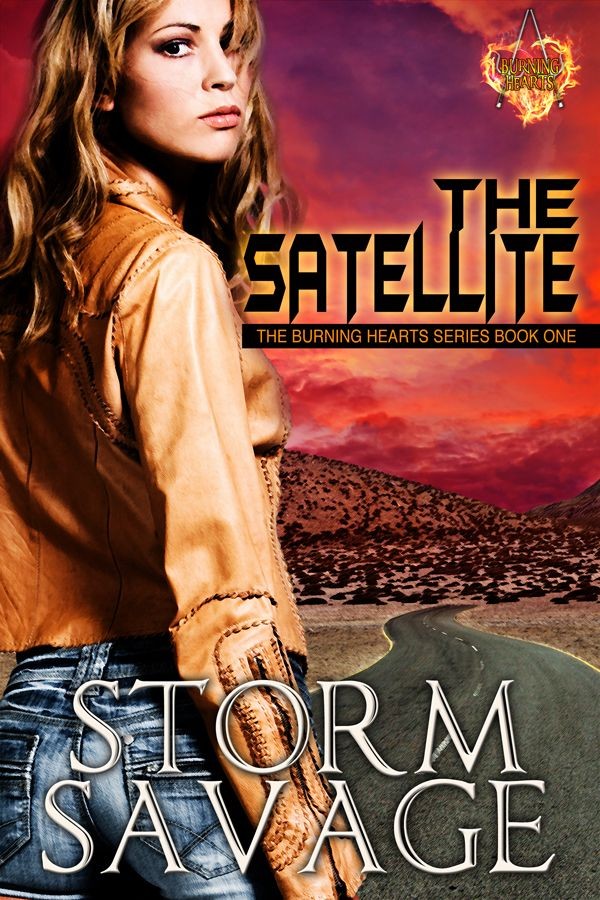 For my readers, thank you for choosing my books. My wish is that you escape reality for a while and enjoy the experience I have created for you.

For Jay, thank you for helping me get back on track. Your support and patience have saved me many times. Never was there a better EIC.

For my cover artist, thank you for the awesome covers in this series, for caring about my preferences and your passion in capturing the feel of the story. You rock!

For my editor Kate, thank you for your honesty, your talent and your fast and professional editing. You are awesome!

And always for Austin, the love of my life. Never was there a braver boy, a brighter spirit or a more loyal friend. I think of you every day, miss you every minute and feel your spirit still lighting my way. Thank you, my puppy angel.

In a world where women rule and men are used for breeding, one warrior rises to the challenge of saving a sisterhood at risk for extinction. When Flame goes up against The Satellite, a no-holds-barred battle ensues and there can be but one winner…or can there?

When Flame is duped into a dangerous scheme by her fiancé’s best friend, she agrees to take on the task and kill the man who took Ian’s wife years ago. According to the information obtained, she is the only one with enough power to defeat such an evil beast.

Ian discovered Flame’s secret during a chance encounter. An elite sisterhood warrior who fights with Sai Daggers is what he’s been waiting for.
He utilizes his friendship with her lover in order to enlist her help. The Satellite stole his first wife and now his pregnant girlfriend is in the line of fire.

Flame is chosen as bait to trap and destroy an incubus—a man who seeks to mate with select females to retain his powers. Will her skills as a warrior be enough when The Satellite seduces her into his lair?

For my readers, thank you for choosing my books. My wish is that you escape reality for a while and enjoy the experience I have created for you.

For Jay, thank you for helping me get back on track. Your support and patience have saved me many times. Never was there a better EIC.

For my cover artist, thank you for the awesome covers in this series, for caring about my preferences and your passion in capturing the feel of the story. You rock!

For my editor Kate, thank you for your honesty, your talent and your fast and professional editing. You are awesome!

And always for Austin, the love of my life. Never was there a braver boy, a brighter spirit or a more loyal friend. I think of you every day, miss you every minute and feel your spirit still lighting my way. Thank you, my puppy angel.

She sat cross-legged on the cool grass beside Sacred Pond with her blades laid before her. Silvery light from a rising full October moon glinted off the gold of her Sai Daggers—her most prized possessions. She’d returned to Celestial Village, the hidden colony of the sisterhood, to seek an audience with the Supreme Lioness. Lately her heart had been troubled over her feelings toward two men. Her fiancé Hatch and his bandmate Raef Jackson were both strikingly handsome men.

Hatch was harder in appearance while Raef could be considered almost pretty.

The last thing she wanted was to create conflict between them, but Raef’s continual flirting made it hard to resist his sweet charm. Recently the three of them had shared an intense few days together following a very traumatic event in her life. She felt close to both men but more drawn to the one she wasn’t supposed to feel for.

While waiting in silent meditation for the Lioness to appear, Flame thought back to recent events involving her and the two gorgeous musicians she’d taken off with a few months after her divorce.

The one secret Flame thought her ex-husband had never known about was her connection to the sisterhood. She’d secretly continued her training as a Sai warrior while Aiden spent his spare time hunting and going off to car shows. When she left him, she had no idea he’d somehow discovered her private life, as she’d been very careful to never leave evidence around that could’ve led him to catch on.

Even Hatch did not discover her hidden skills until she killed a man backstage at the band’s last concert of the year in New York City. While waiting for Hatch to finish the show, Flame heard the cries of a girl in trouble. Upon investigating, she found the bodyguard’s daughter Jacci in imminent danger. The girl’s ex-boyfriend was about to kill her. Flame intervened and saved Jacci’s life, resulting in the death of the assailant. That was the first time Hatch and his friends discovered that she fought with Sai daggers. Up to that point she kept the daggers cleverly concealed in a guitar case.

She managed to gracefully dodge their inquisitions on that occasion. The band and crew hailed her a heroine, but she’d taken it all in stride. Killing a predator was what she’d been trained to do, a calling she embraced with her soul—delivering justice when criminals slipped past the law.

Her trouble didn’t end there. It was as if hooking up with Hatch had incurred bad luck.

A few days after that event, two imposters hired by Aiden tried to abduct Flame right from Hatch’s New York City penthouse suite. After brutally defeating the men, she wanted to kill them, but Hatch held her back to avoid unnecessary attention. At that point, the band members wanted explanations.

She then revealed to them that she was connected to a warrior sisterhood colony—but gave only information enough to satisfy their curiosity. Her sisterhood was an extremely covert organization located in a remote village. Members were sworn to secrecy and bound by loyalty to their cause. In that hidden society, they were able to offer asylum to victims of abuse.

Aiden did not give up.

During her shopping trip while the band was in a recording session, he and his friend, a man who went by the name of Von Calder, grabbed her from behind and the daggers were jarred from her grasp. Without her powerful weapons she’d failed to single-handedly fight off two men.

In all the ten years of marriage to Aiden, she’d never known about his association with a road bike group called the Black Pythons. When he appeared out of nowhere wearing a Black Python biker jacket, she’d been stunned beyond belief.

Apparently they’d both carried deep secrets during their marriage. Aiden was a member of a motorcycle gang, and she—a Sai Warrior.

She’d laugh over the parallel deceptions had the situation not become so serious. But what he and his accomplice put her through would never be forgotten or forgiven. Aiden’s retaliation for the divorce went beyond revenge into the level of sadism. Though the man riding with him had been somewhat compassionate, she’d still not forget that his bike was the one she’d been forced upon for the ride back to her past.

Night had fallen by the time a seven-hour ride brought the mismatched group to their destination in western PA. Flame felt sick when she saw where they had taken her. Her hope grew dim as she read the name
Kaminski
painted on the mailbox outside the yellow brick ranch.
Why did Aiden bring me to his parents’ house?

“We need supplies and money before heading out,” Aiden replied.

He ordered his comrade Von to tie her hands. Flame squirmed and fussed in an attempt to resist.

“Please…don’t bind my hands or leave me here.” She looked up into his midnight eyes, silently pleading for mercy.

Nonetheless, Von overpowered her with ease. His hands were strong and he stood tall over her. Long dark hair tumbled past his shoulders and framed his ruggedly handsome face as he stared back at her. Despite the fact he was helping her ex, she couldn’t deny his mysterious allure. Yet he didn’t yield to her pleas and tied her hands anyway.

“I’m sorry, babe,” he told her. His shadowy eyes revealed a hint of something she couldn’t quite discern. “Aiden told me what a fighter you can be, that you’re some kind of secret warrior. Those daggers you were carrying didn’t scream passive housewife.”

Flame sighed in momentary defeat, hoping for a break. “Why can’t I come with you guys? I don’t want to be here alone with these people.”

Aiden shot her an angry glance. “Because we can’t shop for supplies and keep an eye on you. I know how clever you are. Just stay put. I’ve instructed Sandra to keep you under control.”

“Who the hell is Sandra?” she snapped.

“My girlfriend,” Aiden replied in a cocky tone of voice. “This ain’t no pleasure cruise, darling.”

“Oh, like I’d ever want to be with you again? Get over yourself!”

A petite little blonde came bouncing down the concrete steps to greet them. Once the men were out of sight, Sandra grabbed Flame’s long hair and pulled her into the country abode. With her hands bound, her daggers lost, and no transportation, she relented to the bitch and went inside. Flame fumed at the cowardly act and vowed that this new addition to the
family
would pay.

The familiar odor of cabbage assaulted her senses as they entered the one story house. Nothing had changed. Aiden’s parents Karl and Carlene sat in the same chairs, as if they had not moved since Flame last visited the place. Karl stared at the television and Carlene tapped away at her laptop. Flame looked around to see the same rust colored drapes, green carpet, and dreary Victorian decor still prominent throughout the cluttered home.

Then she caught sight of Aiden’s brother in-law Chuck coming out of the bathroom. He’d always hated her and the feeling was mutual. His presence felt disturbing. Before her departure, he and Aiden had a scuffle with Hatch and his bodyguard when she’d gone back to the house for a few final belongings. Her ex and his sidekick suffered an unexpected beating when they mistakenly thought that her new companions would be easy marks.

She assumed the fight had possibly contributed to Aiden’s unusual act of revenge.

Carlene stood up to greet Sandra. “I see you welcomed our guest,” she said while hugging Aiden’s new girlfriend.

Flame gritted her teeth and clenched her fists, burning to strike.

To Desire a Highlander by Sue-Ellen Welfonder
Deep Six by Clive Cussler
Into the Void (The Dungeoneers) by Chappell, Gavin
Walking the Perfect Square by Reed Farrel Coleman
Nightrunners of Bengal by John Masters
Women of Sand and Myrrh by Hanan Al-Shaykh
Bilgewater by Jane Gardam
Stolen (Book One) (An Alpha Billionaire Romance) by Ella London
Dancing in the Baron's Shadow by Fabienne Josaphat
Epiworld by Morait, Tracey