Third and Long: A Sports Romance 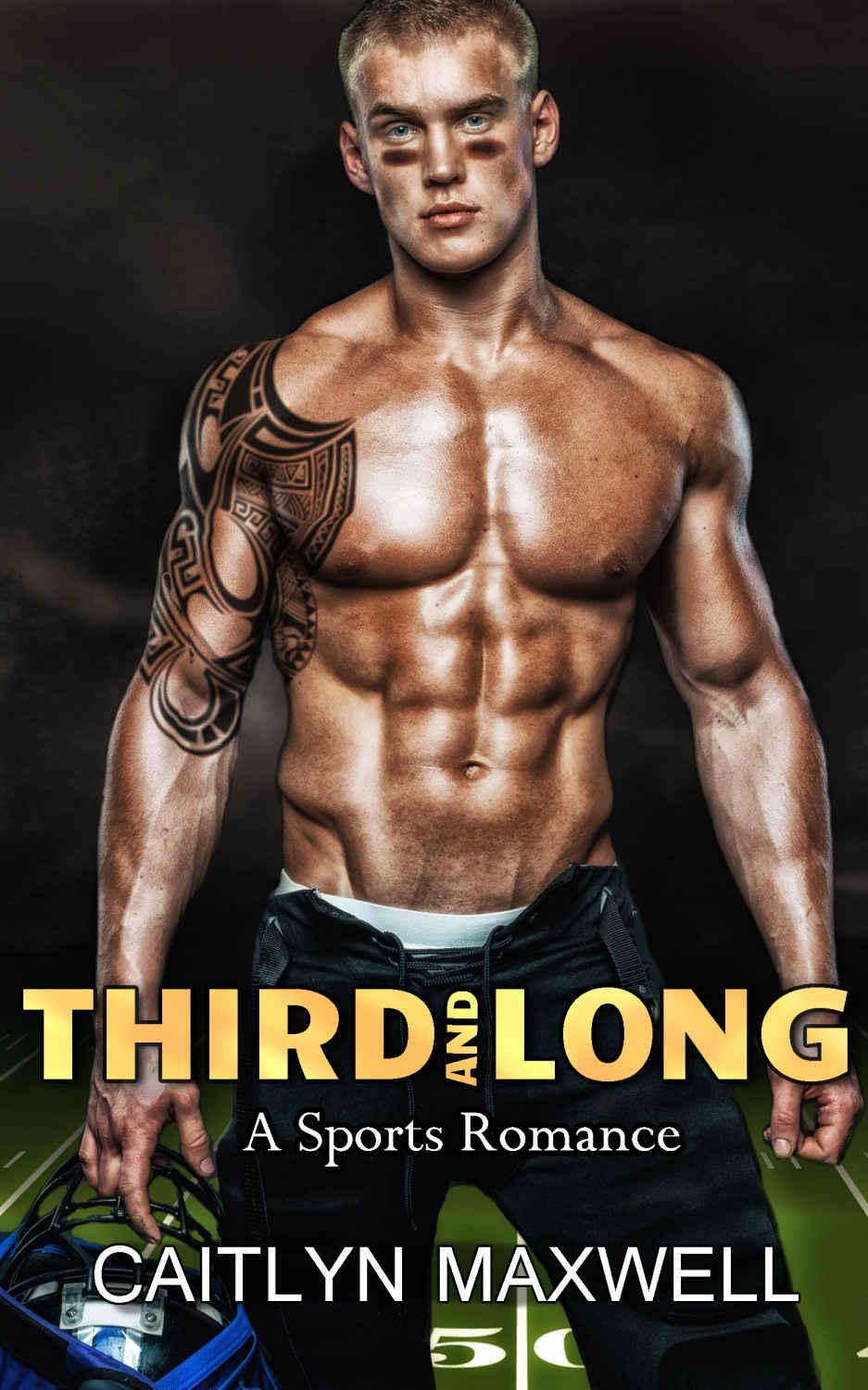 For Love or the Game Preview Chapters

No part of this book may be reproduced in any form without permission in writing from the author, except as used in a book review.

This is a work of fiction. Characters, names, places, events or incidents are products of the author’s imaginations. Any resemblance to actual people, living or dead, or to places or incidents is purely coincidental.

To all the football players I grew up with… you’re my inspiration.

Subscribe to Caitlyn’s newsletter to be the first to hear about new releases, giveaways, and more. Plus, opt-in to become an advance reader for her next book!
Click here.

My calves are on fire. See, when I’m mad, I run. I hit my university’s track before the sun comes up, and I’m going to run until my muscles won’t go anymore. As I round the track for the tenth time, the burning spreads from my calves to my quads. This semester has been hell. There’s a reason that my legs are toned: I’ve been mad a lot.

Try coordinating a semester-long group project with three other girls that party non-stop if you want to feel my pain.

On the eleventh lap my hoodie comes off, leaving me in a sports bra and my favorite pair of red running shorts. No one else on campus is crazy enough to run this early in the morning in the middle of October; otherwise, I’d be a bit more modest. The chill autumn wind bites at my skin, a relief since I’m sweating like I’m in a sauna.

There are two ways that I stop running: either I physically can’t do it anymore, or I forget why I’m mad. The latter is unlikely.

I’m half a semester away from earning my MBA. For marketing class this semester, I got assigned to the most notoriously difficult professor on campus. Professor Castle, or as students fondly call him Professor Asshole, assigned me to a group with Bailey, Nayvee, and Kimber, otherwise known as The Party Girls. We have to design a product, establish cost of manufacturing, and develop a broad marketing plan by the end of the semester. Not only is it the most difficult, time-consuming project imaginable, The Party Girls can’t stay out of the clubs for a night to actually buckle down and do some work for me.

It’s October and we haven’t even come up with a product concept. Apparently, The Party Girls assume our project will materialize out of thin air. Fat chance.

I wouldn’t mind them so much if they could bring themselves to stop Snapchatting me about their night life. Big confidence booster when I’m reading two books at home, and they’re out doing tequila shots in skimpy little dresses. Half a semester left, and this is what I have to put up with. That’s my luck.

So I’m mad. Last night I stayed up until 2 a.m. struggling to draft the first copy of a business proposal. But what’s a business without a product? At some point I passed out. Waking up at 5 a.m. with nothing to show for my late night was all the motivation I needed to grab my running shoes.

I’ve worked too long and too hard to risk screwing up my plans. I’ve already got internships lined up for spring. They want to see straight As, but at this rate there’s no way I’m getting better than a D in Professor Asshole’s class. Meanwhile The Party Girls don’t care if they fail because someone will bail them out. There’s no such safety net in my life. This is it. Career first. Everything else? Second.

It’s been four years since I’ve had a date. A fact that my best friend Gwen Tully reminds me of on a regular basis. Her biggest wish in all the world is that I go out, let loose, and get laid. Not likely.

I’m that person that’s had a five-year plan since they were in kindergarten, and I’ve stuck to it ever since. Success is earned not given.

Rounding the track for the twelfth time, I approach the end of mile three, not that I’m keeping count. My body’s gone well past the point of ordinary pain and entered marathon mode. Run forever mode. Forget why I’m mad mode.

Much to my annoyance, I spot someone else coming out of the locker room across the field. It’s a guy. He sprints out to the track and picks up the inside lane. I don’t mind company, so long as he doesn’t try to talk to me.

Boys are a distraction. Nothing more, nothing less. If I learned anything from my mom, that’s it. She let a boy distract her once, and she’s been paying for it ever since. I’ll never let that happen.

I keep my head down, crank up my music and fun faster. He’s all the way on the other side of the track anyway. If he keeps pace, we’ll never run into each other.

Minutes and meters later, a tap on my shoulder totally ruins my morning. Pulling the headphones out of my head, I turn around to scowl at the guy.

“Do I know you?” I ask, trying my best to show my displeasure.

He laughs. “You mean you
don’t
know me?”

I slow down from a jog to a walk, so I can take a good look at the guy who thinks I’m supposed to know him.

Oh hello
. I don’t know him, but he is drop dead gorgeous. My eyes don’t know where to start first. His skin tight shirt hugs the curves of his broad shoulders and hard, hot chest. I shouldn’t stare at his thick, round biceps, yet here I am staring at them like a deer in headlights.

“Should I know you?” I ask, my eyes getting caught up in his piercing blue gaze. For a few precious moments, I rethink my no-boys rule. Like I said, they are a distraction.

“It’s actually super cute that you don’t,” he says.

“What are you famous or something?” I ask, lingering on his bulging biceps.

“For a couple of things,” he says.

“See, I was coming out here for a run all by myself, but then you got in my way.”

I laugh. Apparently we have something in common.

“Then I saw your amazing ass jiggling in those tight little shorts, and I said to myself: Logan, you gotta talk to this girl.”

My mouth drops open. I stop walking entirely to stand and stare at him and his audacity. “Do you always talk to girls this way?”

“Usually girls start asking me about my cock next, so yeah,” he says so nonchalantly that I can hardly believe this conversation is happening.

“With girls on campus,” he says.

“Not with guys?” I ask with a playful smirk.

“Not unless their girlfriends tell them about it,” he says.

This guy is all self-assured arrogance. I’ve never met anyone so cocky, which is appropriate since he seems to like talking about his cock. He’s
exactly
the kind of boy that I’d never date. The ultimate distraction.

“Don’t worry. I won’t be asking about your cock.” I feel fairly confident saying that.

“You never know,” he says with the world’s most confident smile.

“So what are you doing out here anyway?” he asks.

“I’m mad. When I’m mad, I run,” I say, honestly surprised that he stopped talking about himself to ask about me. I turn up the track and pick up my pace. Logan follows along easily. With those long legs, he could easily out run me. There’s a reason they used to call me short stack in high school.

“I didn’t get your name yet!” he says between deep, controlled breaths.

“Is everything about sex with you?”

Is this guy for real?

“No, Logan, I am not a lesbian. I simply do not have the time for boys.”

“Okay, but I’m a man,” he says. There’s a certain charm to his confidence.

“Or men. Or dating. All distractions in my opinion,” I say.

“Oh my god. When was the last time you got laid?”

Running together, I can tell Logan is studying my face. Better than looking at my breasts like he was doing a moment ago.

“That long huh?” he asks after we run a few feet.

“What, you can read it on my face or something?”

“You could say I have a sixth or even a seventh sense for these things,” he says. Not going to lie, the guy has the perfect smile, all white teeth and beautiful full lips. Couple that with his boyish blue eyes, and I could stare at his face all day. Distractions, distractions.

“And what is your seventh sense telling you now?” I ask as we round another lap.

“That you are going to give me your phone number,” he says with all the confidence of a man that already has it.

Looking at his rock hard body, I actually do consider it for a moment. Then I remember why I’m out here in the first place. I’m running mad because I’m running out of time for my marketing project. This distraction is turning dangerous. My mom, bless her heart, set the example for me before I was born. School and career come first.

“Sorry Logan. You seem like a nice guy, but I’ve got my priorities.”

“But my brain is getting a work out,” I say.

“Brains are sexy too.”

Rounding the track again, my quads feel like they’re about to die. That’s a sign that I’ve run enough to get the mad out. The sweat starts pouring down from my head when I slow to walk again. Logan really starts checking me out now. Apparently he’s got a thing for sweaty bodies not that it surprises me.

Before I can pivot to jog back to the locker room, Logan grabs my hand. He’s got an incredibly firm grip. Pulling me closer to him, it’s impossible not to notice the sheer power emanating from his body. Every muscle in his body was engaged in the run. Peak physical form. There’s a raw intensity in him belied by those charming blue eyes. I feel like he’s a lion trapped in a cage, waiting to burst free.