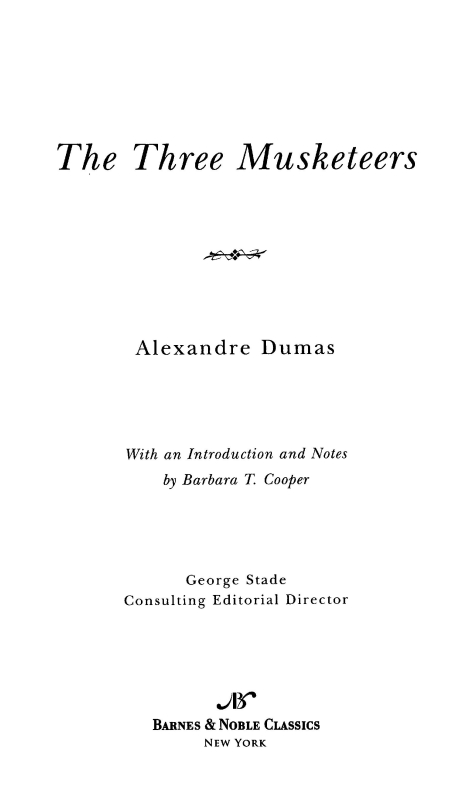 Table of Contents
From the Pages of
Title Page
Copyright Page
Alexandre Dumas
The World Of Alexandre Dumas and The Three Musketeers
Introduction
NOTES TO INTRODUCTION
Author’s Preface
I - THE THREE PRESENTS OF D’ARTAGNAN THE ELDER
Chapter 2 - THE ANTECHAMBER OF M. DE TRÉVILLE
Chapter 3 - THE AUDIENCE
Chapter 4 - THE SHOULDER OF ATHOS, THE BALDRIC OF PORTHOS, AND THE HANDKERCHIEF ...
Chapter 5 - THE KING’S MUSKETEERS AND THE CARDINAL’S GUARDS
Chapter 6 - HIS MAJESTY KING LOUIS XIII
Chapter 7 - THE INTERIOR OF “THE MUSKETEERS”
Chapter 8 - CONCERNING A COURT INTRIGUE
Chapter 9 - D’ARTAGNAN SHOWS HIMSELF
Chapter 10 - A MOUSETRAP IN THE SEVENTEENTH CENTURY
II - IN WHICH THE PLOT THICKENS
Chapter 12 - GEORGE VILLIERS,DUKE OF BUCKINGHAM
Chapter 13 - MONSIEUR BONACIEUX
Chapter 14 - THE MAN OF MEUNG
Chapter 15 - MEN OF THE ROBE AND MEN OF THE SWORD
Chapter 16 - IN WHICH M. SÉGUIER, KEEPER OF THE SEALS, LOOKS MORE THAN ONCE FOR ...
Chapter 17 - BONACIEUX AT HOME
Chapter 18 - LOVER AND HUSBAND
Chapter 19 - PLAN OF CAMPAIGN
Chapter 20 - THE JOURNEY
Chapter 21 - THE COUNTESS DE WINTER
Chapter 22 - THE BALLET OF LA MERLAISON
Chapter 23 - THE RENDEZVOUS
Chapter 24 - THE PAVILION
Chapter 25 - PORTHOS
Chapter 26 - ARAMIS AND HIS THESIS
Chapter 27 - THE WIFE OF ATHOS
Chapter 28 - THE RETURN
Chapter 29 - HUNTING FOR THE EQUIPMENTS
Chapter 30 - D’ARTAGNAN AND THE ENGLISHMAN
Chapter 31 - ENGLISH AND FRENCH
Chapter 32 - A PROCURATOR’S DINNER
Chapter 33 - SOUBRETTE AND MISTRESS
Chapter 34 - IN WHICH THE EQUIPMENT OF ARAMIS AND PORTHOS IS TREATED OF
Chapter 35 - ALL CATS LOOK ALIKE IN THE DARK
Chapter 36 - DREAM OF VENGEANCE
Chapter 37 - MILADY’S SECRET
Chapter 38 - HOW, WITHOUT INCOMMODING HIMSELF, ATHOS PROCURED HIS EQUIPMENT
Chapter 39 - A VISION
Chapter 40 - THE CARDINAL
Chapter 41 - THE SIEGE OF LA ROCHELLE
Chapter 42 - THE ANJOU WINE
Chapter 43 - THE INN OF THE RED DOVECOT
Chapter 44 - THE UTILITY OF STOVEPIPES
Chapter 45 - A CONJUGAL SCENE
Chapter 46 - THE BASTION SAINT-GERVAIS
Chapter 47 - THE COUNCIL OF THE MUSKETEERS
Chapter 48 - A FAMILY AFFAIR
Chapter 49 - FATALITY
Chapter 50 - CHAT BETWEEN BROTHER AND SISTER
Chapter 51 - OFFICER
Chapter 52 - CAPTIVITY THE FIRST DAY
Chapter 53 - CAPTIVITY THE SECOND DAY
Chapter 54 - CAPTIVITY THE THIRD DAY
Chapter 55 - CAPTIVITY THE FOURTH DAY
Chapter 56 - CAPTIVITY THE FIFTH DAY
Chapter 57 - MEANS FOR CLASSICAL TRAGEDY
Chapter 58 - ESCAPE
Chapter 59 - WHAT TOOK PLACE AT PORTSMOUTH, AUGUST 23, 1628
Chapter 60 - IN FRANCE
Chapter 61 - THE CARMELITE CONVENT AT BÉTHUNE
Chapter 62 - TWO TYPES OF DEMONS
Chapter 63 - THE DROP OF WATER
Chapter 64 - THE MAN IN THE RED CLOAK
Chapter 65 - TRIAL
Chapter 66 - EXECUTION
Chapter 67 - CONCLUSION
Epilogue
Endnotes
Inspired by The Three Musketeers
Comments & Questions
For Further Reading
From the Pages of
The Three Musketeers

Imagine to yourself a Don Quixote of eighteen; a Don Quixote without his corselet, without his coat of mail, without his cuisses; a Don Quixote clothed in a woolen doublet, the blue collar of which had faded into a nameless shade between lees of wine and a heavenly azure; face long and brown; high cheek bones, a sign of sagacity; the maxillary muscles enormously developed, an infallible sign by which a Gascon may always be detected, even without his cap—and our young man wore a cap set off with a sort of feather; the eye open and intelligent; the nose hooked, but finely chiseled. (page 11-12)
“All for one, one for all—that is our motto, is it not?” (page 115)
“Oh, nothing but a scratch.” (page 233)
Immediately eight swords glittered in the rays of the setting sun, and the combat began with an animosity very natural between men twice enemies. (page 361)
During the evening she despaired of fate and of herself. She did not invoke God, we very well know, but she had faith in the genius of evil—that immense sovereignty which reigns in all the details of human life, and by which, as in the Arabian fable, a single pomegranate seed is sufficient to reconstruct a ruined world. (page 590) 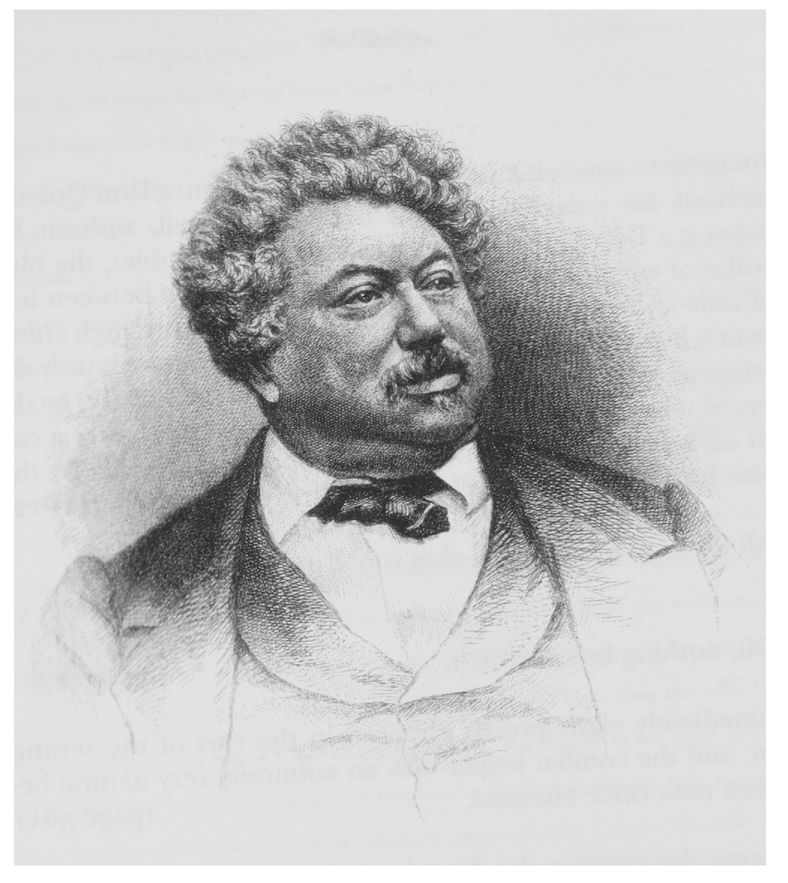 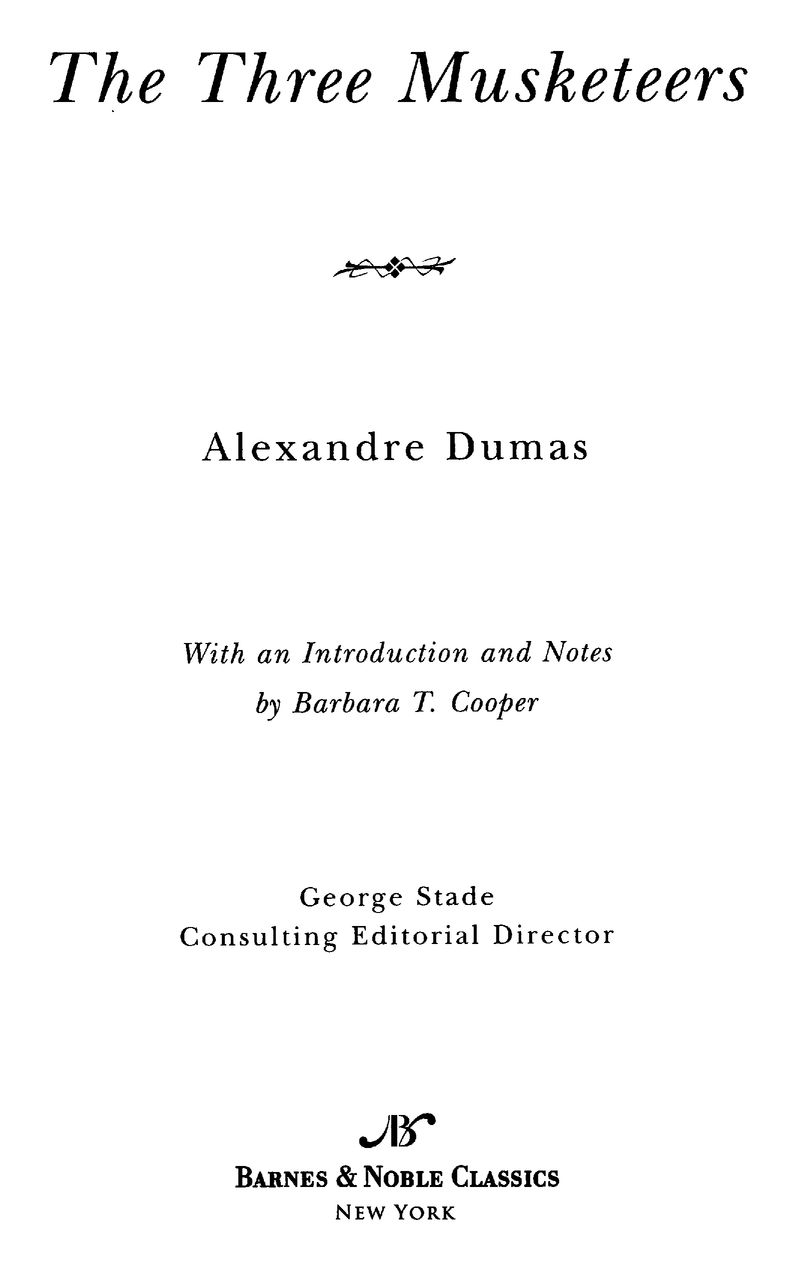 Published by Barnes & Noble Books
122 Fifth Avenue
New York, NY 10011
www.barnesandnoble.com/classics
Alexandre Dumas published
The Three Musketeers
in 1844.
The present translation, like many editions which first introduced English
readers to Dumas’s work, remains anonymous.
Originally published in mass market format in 2004 by Barnes & Noble Classics
with new Introduction, Notes, Biography, Chronology, Inspired By,
Comments & Questions, and For Further Reading.
This trade paperback edition published in 2004.
Introduction, Notes, and For Further Reading
Copyright © 2004 by Barbara T. Cooper.
Note on Alexandre Dumas, The World of Alexandre Dumas and
The Three Musketeers,
Inspired by
The Three Musketeers,
and Comments & Questions
Copyright @ 2004 by Barnes & Noble, Inc.
All rights reserved. No part of this publication may be reproduced or
transmitted in any form or by any means, electronic or mechanical,
including photocopy, recording, or any information storage and
retrieval system, without the prior written permission of the publisher.
Barnes & Noble Classics and the Barnes & Noble Classics
colophon are trademarks of Barnes & Noble, Inc.
The Three Musketeers
ISBN-13: 9’78-1-59308-148-5
eISBN : 978-1-411-43329-8
ISBN-10: 1-59308-148-0
LC Control Number 2004102769
Produced and published in conjunction with:
Fine Creative Media, Inc.
322 Eighth Avenue
New York, NY 10001
Michael J. Fine, President and Publisher
Printed in the United States of America
QM
5 7 9 10 8 6 4
Alexandre Dumas

Alexandre Dumas was born on July 24, 1802, in Villers-Cotterets, a town northeast of Paris. He was the grandson of a French nobleman, the Marquis Davy de la Pailleterie, and Marie-Cessette Dumas, an Afro-Caribbean slave. His father, Thomas-Alexandre Davy de la Pailleterie, took the name Dumas when he enlisted in the French army. After a period of illustrious service, he rose to the rank of general; but by the end of the eighteenth century, he had fallen into disfavor with Napoleon and was subsequently imprisoned. Thomas-Alexandre Dumas died penniless and broken at age forty-five, leaving his family impoverished. Young Alexandre received only a limited education; however, he was an avid reader, and his elegant penmanship got him a position as clerk to a solicitor. In 1823 he moved to Paris, where, through his father’s connections, he became a copyist for the Duke of Orléans, the future King Louis-Philippe.

If Dying Was All by Ron Goulart
The Life And Times Of The Thunderbolt Kid: A Memoir (v5.0) by Bill Bryson
Life and Times of Michael K by J M Coetzee
Durbar by Singh, Tavleen
Vanishing Acts by Phillip Margolin, Ami Margolin Rome
The Mesmerized by Rhiannon Frater
Imperfect Partners by Ann Jacobs
Shock (Wildfire Chronicles Vol. 2) by Griffiths, K.R.
Under My Skin by Laura Diamond
Wounds - Book 2 by Ilsa J. Bick