Read Through Her Eyes Online 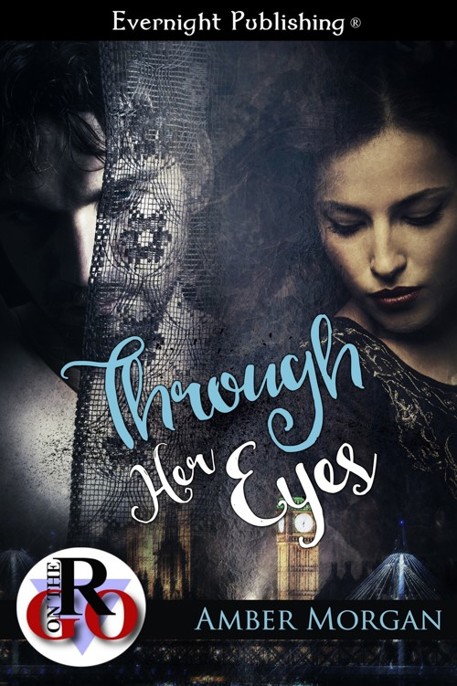 To the
Evernight
Family—a more talented, generous, and
creative bunch would be harder to find!

Cold hands seized her, wrapping round her throat in an
iron grip. The scream that spiraled up in her lungs was crushed from her. He
shoved her hard against the wall, face first. If there'd been any air left in
her that would have knocked it out. The brickwork scraped her cheek and the
stinging pain brought tears to her eyes.

She felt him push against her, his body hard and
unrelenting. Through the flimsy material of her skirt, she felt his cock strain
against her ass cheeks. Horror turned her stomach and she tried to struggle,
kick, anything that might free her. It was impossible. He was strong and
unyielding. He put his lips to her ear and whispered, "They all try to
fight. They all fail."

His words were like an icy lance through her heart. She
whimpered, the only sound she could make while his fingers squeezed at her
throat. Her vision was blurring, growing steadily
darker
as her heart fluttered uselessly against her ribs. He was going to hurt her and
she couldn't stop it. It would be a mercy to lose consciousness.

And then she felt the blade against her cheek.

His voice was rough with dark pleasure. "Say
goodnight, sweetheart."

White light blinded Keira, obscuring the blood and
lurid graffiti before her. Pain stabbed through her skull as she was pulled
away from the nightmare she'd just witnessed, slamming back to reality, back
into her body.

She sat up with a scream on her lips, sweat on her
shivering body. Cool night air swirled around her through the open window, and
her bed sheets were tangled around her legs. She'd been thrashing, kicking out.
Just like the girl she'd been watching.

Vomit rose in her throat. She stumbled from the bed
into the bathroom, falling to her knees in front of the toilet. She puked
noisily, violent images of blood and blades flashing before her eyes.

God, was it starting again? She closed her
eyes, tears threatening. It had been years. She'd put it all behind her. She'd
been trying so hard to have a normal life.

Footsteps thudded on the stairs. She started, pulling
herself up and wiping her mouth. She was reaching for the mouthwash when Dylan
poked his head into the bathroom.
"Keira?
What's
wrong?"

She chewed her lip, torn between answering honestly
and lying. Her housemate only knew pieces of her past. He'd seen the scars, of
course. There was no hiding them. But he didn't know the whole story, didn't
know what really happened to her six years ago. And he was such a rational man
there was no way he'd believe the whole story.

"Keira," he repeated when she didn't answer.
"What's happening? You're sick?"

She sucked in a deep breath, gripping the sink for
support. Her knees felt weak, her head pounded. It always did after...After.
"I'm fine." She lied. It was easier to lie.
"Must
have been the takeaway."
She tried a smile, big and bright and
fake. Dylan came closer, massaging her shoulders. His fingers were warm and
gentle, pushing back a little of her lingering nausea and fear.

"I thought that beef tasted funny. Why don't you
go and lie down?"

"Are you still working?" she asked. "I
could do with some company." It wasn't uncommon for Dylan to sit up all
night working on web designs. Once he got absorbed in a project, the rest of
the world vanished. But she needed the warmth and comfort of another person
right now. Maybe then she could pretend she'd just had a nightmare, a
flashback.

Dylan rubbed his eyes, smothering a yawn. "I
should stop for the night," he said. "It's almost three in the morning
and I'm supposed to be meeting Greg for breakfast." His boyfriend hated
lateness and Dylan was perpetually late. "Give me a minute and we'll go
huddle on the sofa."

She nodded, relieved. She brushed her teeth, swilled
her mouth out with mouthwash, and stared at herself in the mirror. Her olive
skin was chalky, her eyes bloodshot. She looked like she felt – haunted. She
turned away from her reflection and headed downstairs.

Dylan was already on the sofa, arranging a blanket
around
himself
. He held it up so she could slide
under, and he wrapped his arm around her shoulders, pulling her in close
against him. The familiar scent of the watermelon bubblegum he always chewed
whilst working washed over her. The solid warmth of him was as much a comfort
as the blanket, and she let the sense of safety and
security
fill
her.

"Let's see what trash we can find on TV," he
said. "Three am is prime time for Bigfoot documentaries and
b-movies
."

It was an old routine. Dylan didn't know her past, but
he did know it haunted her, and he never failed to create the sanctuary she
needed.

It didn't have to be real, she told herself as he
settled the blankets around them. It could have just been a nightmare.

Please, please let it be a nightmare.

Dylan soon nodded off in the middle of a documentary
about steroid abuse. Keira couldn't settle, afraid to fall asleep in case it
happened again and she was sucked out of her body, dragged back to that scene.
Blood and blades in the night, screams and pleas for mercy falling
on merciless ears.

At six am she stopped trying to sleep and crept out of
the blanket nest, leaving Dylan snoring softly. She went into the large
kitchen-diner, which they'd turned into a kitchen-office. He'd left his
computer on, as usual, and the bluish glow from the screen lent a sinister air
to the room. It highlighted the debris of their lives – wires, discs, speakers,
and motherboards from his, piles of unmarked essays and lessons plans from
hers. She flopped onto the sofa, studying the essays with a distant sense of
guilt. It was only three weeks until the school term started again and she
hadn't done a damn thing yet.

She'd been questioning recently if she even wanted to
return to teaching. The school she worked at was a residential for children
with emotional and social problems – in theory somewhere she'd love to be.
She'd gone into teaching wanting to make a difference to children. But the kids
were rowdy, impossible to discipline, and the atmosphere at the school was
depressing, as if every teacher knew they were fighting a losing battle.

Maybe that was what triggered the nightmare. She had
to think of it as a nightmare. Stress and anxiety over her future, maybe that
caused the nightmare? It was a better explanation than the other one, that her
past was coming back to haunt her.

That someone died tonight and she saw it.

She shuddered, bile rising in her throat again. She
swallowed hard and went to the kitchen to fix
herself
some warm milk, loading it with honey. Her mother swore by it as a remedy for everything.

She sat at the kitchen table, cradling her mug and
watching dawn break over her little garden. The neighbor's tabby cat lounged in
the grass, watching blackbirds hop along the fence. The sky was streaked with
pink and gold.
Beautiful.
Peaceful.
A world away from her nightmare, the woman's agonized face, the blood staining
the blade as it flashed down again and again...

Keira rubbed her ribs absently, feeling the jagged
ridges of old scars through her thin
cami
top.
Phantom flashes of pain rippled through her. Her ribs still ached in the
winter. She'd told Dylan she'd been assaulted, a random mugging when she'd been
living in London. He'd never asked for more details.

The ring of her mobile phone broke through her
reverie, making her jump. She pressed her hand to her forehead, sighing. She
couldn't go back to this. It had taken a year for her to get over jumping at
every noise, to stop being paranoid at every shadow. She hadn't even been able
to watch the TV for months; news of the Shoreditch Slasher had kept the
journalists and broadcasters busy for so long. Speculation on
who
, why, where... She shuddered.

The phone kept ringing. God, who rang this early? She
went to retrieve it from the living room, not wanting to wake Dylan.
Trepidation filled her, heart fluttering as she saw
unknown number
flashing on the screen. She hovered between rejecting the call and answering.

You can't let the past control you
, she told herself, and answered
before she lost her nerve. "Hello?" she whispered, hurrying back to
the kitchen.

"Keira?
Is this Keira Swanson? It's
Detective Abbott – Dom."

The air froze in her lungs, words stuck in her throat.
Her heart went into overdrive, slamming adrenaline through her. Oh no, no,
no...

She swallowed hard, wet her dry lips, and forced
herself to speak.
"Dom."
Her knees gave out
and she sat down hard in Dylan's desk chair. "Dom. I...It's...."

"It's been a while," he finished for her,
his raspy smoker's voice soft, careful. "How are you, Keira?"

How to answer? It was too much to think it was
coincidence that he would call now after her...nightmare. "I'm...I'm not
great, Dom." She'd never been able to lie to him. There was just something
about him that pulled the truth from her every time. She could picture him now,
probably hunched over a black coffee, cigarette in hand, dark eyes piercing,
but kind. "I didn't sleep well."

"I didn't think you had." There was a long
pause, and Keira imagined him taking a drag on his cigarette, measuring his
words. He needn't have bothered. She knew what he was going to say next.
"A girl died last night in Shoreditch."

He sighed heavily, as if he'd been hoping she'd say
something else. "I think we should meet, Keira. We should talk."

Hexing the Alpha (Hex My Heart, #1) by Talina Perkins
Viking's Orders by Marsh, Anne
All Of You (Only You) by Cahill, Rhian
Blood Gold by Michael Cadnum
Rekindle the Flame by Kate Meader
The Sorcerer's Ring: Book 05 - A Vow of Glory by Morgan Rice
Sire by Thomas Galvin
A Canoe In the Mist by Elsie Locke
The Marriage Replay by Maggie Cox
A Thousand Miles from Nowhere by John Gregory Brown