Read Through the Grinder Online 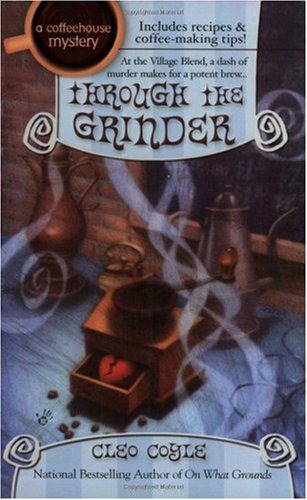 Praise for Cleo Coyle’s Coffeehouse Mystery #1 ON WHAT GROUNDS

“A great beginning to a new series…Clare and Matteo make a great team…
On What Grounds
will convert even the most fervent tea drinker into a coffee lover in the time it takes to draw an espresso.”

“The first book in Coyle’s new series is a definite winner! The mystery is first rate, and the characters leap from the page and are compelling, vivid, and endearing. The aroma of this story made this non–coffee drinker want to visit the nearest coffee bar.”

“[A] clever, witty, and lighthearted cozy. Cleo Coyle is a bright new light in the mystery horizon.”

“Coffee lovers will delight in Clare’s tips on roasting, grinding, storing, and preparing the perfect cup of coffee (and using the grounds to tell the future). And her luscious recipes and captivating anecdotes about the important role of coffee in the history of civilization are a perfect accent to the rich blend of characters and plot that make
On What Grounds
such a satisfying mystery. This new series is off to a piping-hot start, and we can’t wait to see what new cases the author has percolating!”

THROUGH THE GRINDER
CLEO COYLE

A Berkley Prime Crime book / published by arrangement with the author

All rights reserved.
No part of this book may be reproduced, scanned, or distributed in any printed or electronic form without permission. Please do not participate in or encourage piracy of copyrighted materials in violation of the author’s rights.
Purchase only authorized editions.
For information address: The Berkley Publishing Group, a division of Penguin Group (USA) Inc., 375 Hudson Street, New York, New York 10014.

Once again to Martha Bushko and John Talbot—with whipped cream and caramel syrup on top!

When you are worried, have trouble of one sort or another—to the coffee house!…

You could not find a mate to suit you—coffee house!

You hate and despise human beings, and at the same time you can not be happy without them—coffee house!

RECIPES & TIPS FROM THE VILLAGEBLEND

The Genius knew this and was absolutely fine with it. The problem, of course, was how.

In the Genius’s view, almost any problem could be solved through study. So it was no surprise when the study of Valerie Lathem’s life yielded the solution to her death.

The air on that pale November morning displayed an especially cruel bite, stabbing at cheeks, chins, and all other areas of exposed human flesh. Still, the Genius stood with the usual patience at the usual bus stop, pretending to wait for the usual bus. Reading the paper was usual enough, too, but the
Times
articles felt incomprehensible today, and the wait became interminable.

When the twenty-seven-year-old woman finally emerged from her dingy brick apartment building, the Genius followed the pert face and slender figure, the shoulder-length retro flip hair the color of rancid butter, the black boots with heels too high, green cargos a size too small, and that cheap red leather jacket she’d purchased at SoHo Jeans the day before.

With brisk steps, the woman followed Bleecker across Sixth Avenue, the wide, high-traffic chasm dividing modern Manhattan from the year 1811, when city fathers and their Euclidean plans for perpendicular streets were defied by village residents who refused to have their district’s twisted lanes made straight.

For two hundred years, this winding web of cobblestone streets, narrow alleys, and secluded pathways has obeyed no logical pattern. The frosty air has been tinged with the acrid smell of logs burning on nineteenth century hearths. Gas lamps have been flickering near gated mews, hidden gardens, or sedate churchyards. And the sidewalks have edged not skyscrapers arranged in uniform grids, but a low-lying landscape of three-and four-story row houses, many now lodging offbeat boutiques, pricey bistros, and the occasional dark-paneled pub—all closed for business at this early hour.

A corner on Hudson was the woman’s first stop, the site of a four-story Federal-style townhouse occupied for the last ten decades by the Village Blend coffeehouse. As she reached for the old brass handle, the beveled glass door swung wide, vomiting out three pubescent NYU students with a gust of roasting coffee.

The earthy aroma drifted across the cobblestones on the crisp, fall air—a siren’s call of freshly frothed cappuccinos, warm pastries, anise biscotti, and bracing espressos. But entering the Blend was not an option. Not for the Genius. Not until the objective was achieved.

Until then, there would be no cozy fireplace, no foamed milk, no buttery croissant. Across the street, the Genius shifted from foot to foot on the cold sidewalk, eyes peering through the Blend’s twelve-foot-tall front windows.

Like trendy cattle, a dozen customers milled around the coffee bar counter. The woman placed her order with a lanky young man, waited a few minutes, then collected a paper cup from a petite brunette.

At last, the door swung wide again. An enviable puff of aromatic steam rose from the cup when it hit the cold air. For a moment, Valerie Lathem’s snug green cargo pants paused on the sidewalk to touch her full lips to the edge of the lid. A shiver of delight followed, and the Genius struggled against a sharp memory of another place the woman’s lips had touched…that place on him…

And on other men.

For a moment, the Genius had trouble breathing. “One push. Timed just right…”

Then the Slut continued her journey, hiking north and east, to Fourteenth and Broadway, where a wide public area of grass, tress, and benches formed Union Square Park.

On Tuesdays, Thursdays, and Sundays, the wide concrete border to the west of the park was reserved for metered parking. On Mondays, Wednesdays, Fridays, and Saturdays, however, cars were banned and an open-air farmer’s market appeared.

Regional growers from New Jersey, Long Island, and upstate New York packed the white-tented stands with produce. The Genius trailed the Slut as she visited table after table, purchasing organically grown apples and carrots, three kinds of homemade jams, a jar of natural honey, and finally a fresh-baked loaf of whole wheat bread. These were intended for the Slut’s elderly grandmother, whom she visited uptown every Saturday—most likely in an effort to cinch some share of inheritance.

The R train had been the Slut’s transport of choice for the last two Saturdays, and when she headed toward the subway stairs again today, the Genius allowed a small exhale of relief.

Below ground, the northwest entrance provided a bank of Metrocard machines and a “token booth”—which hadn’t sold tokens since 2003. The Slut had already purchased her Metrocard, so she strode across the black spotted concrete floor, past the vending machines to the turnstiles, and swiped the bright yellow rectangle through the silver slot.

An almost imperceptible click sounded as the machine deducted the cost of the ride from the card. Then, with a ker-chunk, ker-chank, the Slut pushed through the metal spider and strode toward the stairwell on the left, leading down another level to the Broadway line’s Uptown platform.

After waiting thirty seconds, the Genius swiped a pre-purchased Metrocard, just as the Slut had. But there was no click. The little screen embedded in the silver turnstile arm read
STOP: PLEASE SWIPE YOUR CARD AGAIN AT THIS TURNSTILE
.

On a weekday at such an early hour, this station would be packed with office workers and college students, but on a Saturday, riders were scarce. Two turnstiles away, the only other riders at this entrance—a middle-aged woman and two little girls—laughed and giggled as they swept through and away, toward the Downtown stairwell to the right.

The Genius stared straight, trying not to call attention. Sweaty palms made the plastic moist. Slowly came a distant rumbling.

A train was coming. Uptown or down? Unable to tell, the Genius brushed the card across a coat sleeve, and swiped again.

The Genius bolted through the spider arms then flowed down the stairs like liquid. Feet on the platform, the Genius leaned over the tracks. At the far end, near the mouth of the tunnel, the reflection of a headlight beam stretched along the tiled wall like the advancing movement of a pointing finger.

The train was coming—an uptown train.

The Genius swiftly snaked around the edge of the staircase. Here the narrow concrete platform measured no more than the length of two subway cars. At one end was a wall, at the other, the back of the staircase the Genius had just descended. Only commuters who wished to ride in the first two cars would wait here—riders like Valerie. She stood alone behind the staircase, hidden from the few other riders on the platform’s south end.

The track curved a bit at this particular station, and the train could not be seen approaching unless the commuter leaned forward, peeking around the row of dull green vertical support beams. The Slut was doing just that—leaning a bit over the edge of the platform, watching the approach of her train. One hand held her bag of farmers market produce, the other her double tall cup of Village Blend coffee. No hand free—not to fight, not even to balance herself.

The Genius stepped carefully behind the Slut, the mechanical junk-rumble of the coming train, like spare parts in a washing machine, drowning out any footsteps. This station was one of the loudest in the city—the decibel level making it impossible to hear conversation, maybe even screams. In another three seconds, the Genius would know for sure.

As the red leather coat fell forward into the empty air, then down, toward the grimy tracks, the Genius did hear a scream. And finally there was red on the tracks. First one way. Then another.

As the shriek of the victim was drowned out by the shriek of the R train’s brakes, the Genius backed into the shadows of the staircase, snaked around the corner, wandered back up, then through the turnstiles, and up once more, ascending into the invigorating chill of this brand new day.

Finally, finally, that feeling of accomplishment. Objective achieved…and…time for that cappuccino!

It Begins With a Rogue's Bite by Jessica Frost
The Real Mrs. Price by J. D. Mason
Shadow Country by Peter Matthiessen
Cherish by Catherine Anderson
Baptism of Rage by James Axler
The Folly by M. C. Beaton
Flesh: Part Fourteen (The Flesh Series Book 14) by Corgan, Sky
Enigma: A Far From Home Novel by Tony Healey
Forbidden Fire by Jan Irving
Return of the Homework Machine by Dan Gutman