Read Through the Medicine Cabinet Online

Through the Medicine Cabinet 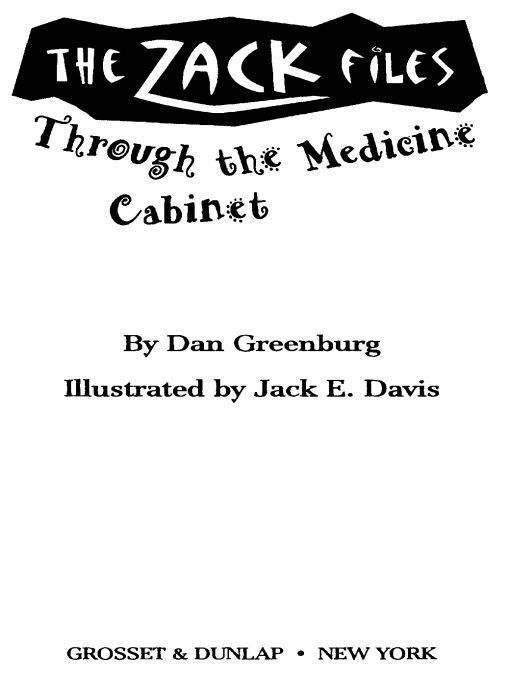 Table of Contents
Â
Dedication
Title Page
Acknowledgements
Copyright Page
Â
Chapter 1
Chapter 2
Chapter 3
Chapter 4
Chapter 5
Chapter 6
Chapter 7
Â
What else happens to Zack? Find out in A Ghest Narred Wanda
For Judith, and for the real Zack, with loveâD.G. 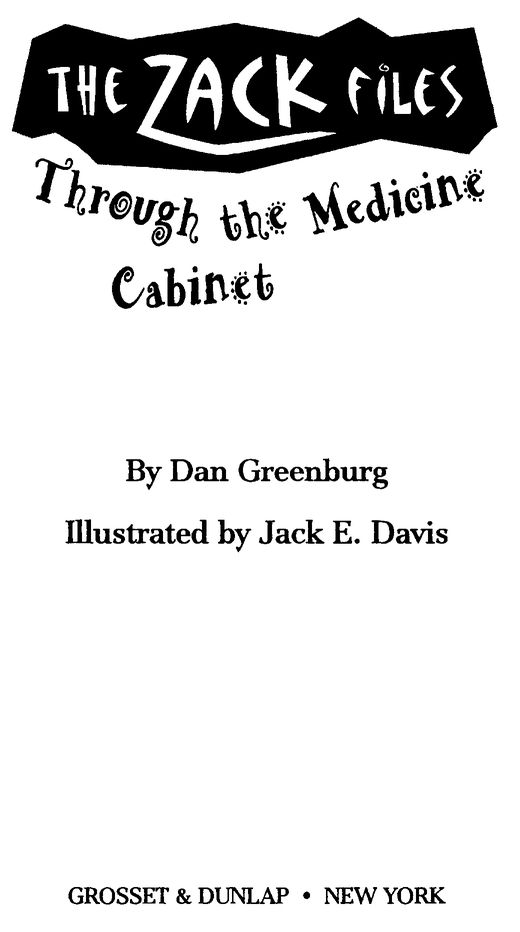 I'd like to thank my editors,
Jane O'Connor and Judy Donnelly,
who make the process of writing and revising
so much fun, and without whom
these books would not exist.
Â
I also want to thank
Jennifer Dussling and Laura Driscoll
for their terrific ideas.
Text copyright Â© 1996 by Dan Greenburg. Illustrations copyright Â© 1996 by Jack E. Davis. All rights reserved. Published by Grosset & Dunlap, a division of Penguin Putnam Books for Young Readers, New York. THE ZACK FILES is a trademark of The Putnam & Grosset Group. GROSSET & DUNLAP is a trademark of Grosset & Dunlap, Inc. Published simultaneously in Canada. S.A.
Â
Library of Congress Cataloging-in-Publication Data
Greenburg, Dan.
Through the medicine cabinet / by Dan Greenburg; illustrated by Jack E. Davis.
p. cm. - (The Zack files)
Summary: After Zack opens his medicine cabinet one morning and sees a boy who could be his double staring back at him, he enters a parallel universe.
[1. Supernatural-Fiction.] I. Davis, Jack E., ill. II. Title. III. Series: Greenburg, Dan. Zack files.
PZ7.G8278Th 1996
[Fic]-dc20
96-7107
CIP
AC
eISBN : 978-1-101-07834-1

Chapter 1
Â
Â
Â
I
'm what you'd call a pretty normal kid. My name is Zack, which is a pretty normal name. I'm ten years old, which is a pretty normal age. I have normal brown hair and eyes. I have slightly crooked teeth, which is normal at my age. And I live in a big apart ment building in New York. I always
thought
my building was normal, at least until the thing I'm about to tell you happened.
I've got to -admit I've always been interested in weird stuff. Stuff like dead people. crawling out of their graves at night. Or guys who stare at you and then suddenly their heads explode. I haven't actually seen those things. But who am I to say they couldn't happen?
Anyway, the time I want to tell you about happened at the beginning of spring vacation. My dad arranged to take me down to Florida. We were going to visit the New York Yankees at their spring training camp.
My parents are divorced. Part of the time I live with my dad. He's a writer, and he gets to do lots of cool things. Like go to spring training and then write about it in a magazine. I can't believe he gets paid to do this stuff. Neither can he.
Saturday morning was when we were planning to leave. I was so excited, I woke up at about 6:00 A.M. The minute I opened my eyes, I realized something. I had forgotten to put my retainer in my mouth before I went to sleep. Where the heck was it? A retainer, in case you don't know, is braces that you wear on your teeth at night. I don't exactly love my retainer. It's made of wire and pink plastic. It's really gross-looking, especially when you take it out and put it on the table at lunch.
My dad hates when I lose my retainer. They cost twelve hundred dollars, I think. Or a hundred and twelve. I forget which.
I left one retainer in a pair of jeans, which went in the laundry. It melted to the inside of the pocket. One got chewed up in my Grandma Leah's garbage disposal. Another got flushed down the toilet. Another one I'm almost positive a robber stole while I was out of my room, although I've never been able to prove this.
All in all, I have not lost more than seven of them. Eight, tops.
I was sure my retainer was in the medicine cabinet in the bathroom, instead of in my mouth, where it should have been. I got up and opened the door of the medicine cabinet. Yes! There was my retainer. But then, just as I was about to close the cabinet door, something weird happened. Something very weird. The back of the medicine cabinet opened. And there, staring right in my face, was a boy who looked almost exactly like me! 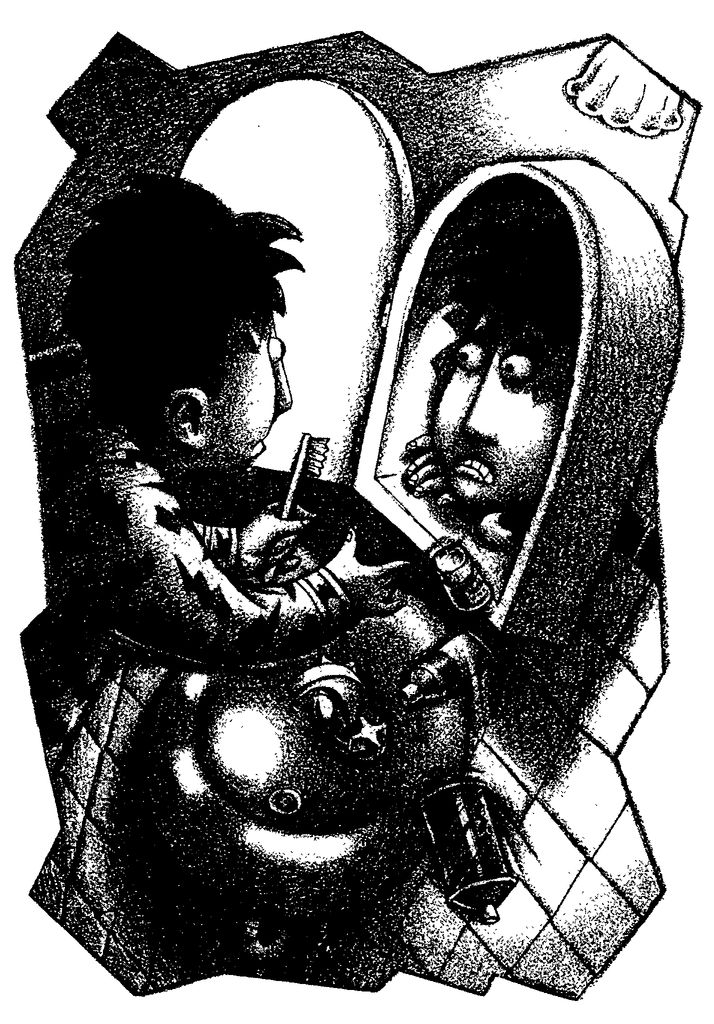 Chapter 2
Â
Â
Â
A
boy who looked just like me? How could that be? I was so startled, I knocked over my retainer. It fell into his bathroom. Then we both screamed and slammed our medicine cabinet doors shut.
What the heck was happening here?
Very slowly I opened the medicine cabinet again. Nope. There was nobody on the other side. I pushed against the back of it. It didn't open. Very weird.
So where was my retainer? I figured I'd better check out the apartment next door. An old lady named Mrs. Taradash lives there.
Mrs. Taradash is kind of cranky. I know she isn't too happy about the basketball hoop I have mounted on my wall. She's complained to my dad lots of times. When I slam-dunk, she says it's like a 5.7 tremor on the Richter scale.
But maybe Mrs. Taradash had a grandson. Maybe her grandson looked almost exactly like me. And maybe her medicine cabinet was hooked up to ours on the other side.
I knew this explanation didn't make much sense. But it was all I could come up with.
I got dressed. Then I slipped quietly out of our apartment. I knocked on Mrs. Taradash's door. There was no answer. I knocked again. It took a while before somebody opened it. Mrs. Taradash was in a fuzzy robe and fuzzy slippers. Her hair was all messed up. And she was rubbing her eyes. She didn't seem all that thrilled to see me, if you want to know the truth.
“I'm sorry to bother you, Mrs. Taradash,” I said. “I was wondering whether I could get my retainer out of your bathroom.”
“Your what, precious?” she said.
She calls all kids “precious.” But you can tell she doesn't think they are.
“My retainer,” I said.
“What in the name of heaven is that, precious?”
“A retainer is braces made out of wire and pink plastic, which sometimes falls down disposals or toilets,” I explained. “Mine fell into your apartment when your grandson opened the medicine cabinet door.”
Mrs. Taradash looked at me like I was cuckoo.
“I don't have a grandson, precious,” she said.
“You don't have a grandson? Then who opened the other side of my medicine cabinet just now?”
The bottom half of her face smiled. But the top half was frowning. It looked like both halves were fighting with each other. She tried to close the door on my foot.
“Please don't close the door, Mrs. Taradash,” I begged her. “I lost my retainer in your apartment. It's the eighth one that's gotten away from me. Maybe the ninth. If I don't get it back, my dad will kill me. You wouldn't want that on your conscience, would you?”
She opened the door and looked at me.
“What do you want?” she said. It was more hissing than talking. And she seemed to have forgotten the word “precious.”
“Just my retainer,” I said, “which the boy who's not your grandson will tell you fell into your bathroom from my medicine cabinet. Please just let me look for it.”
“If I let you look,” she said, “will you go away and let me get back to sleep?”
“Yes, ma'am,” I said.
She sighed a deep sigh. Then she waved me into the apartment. 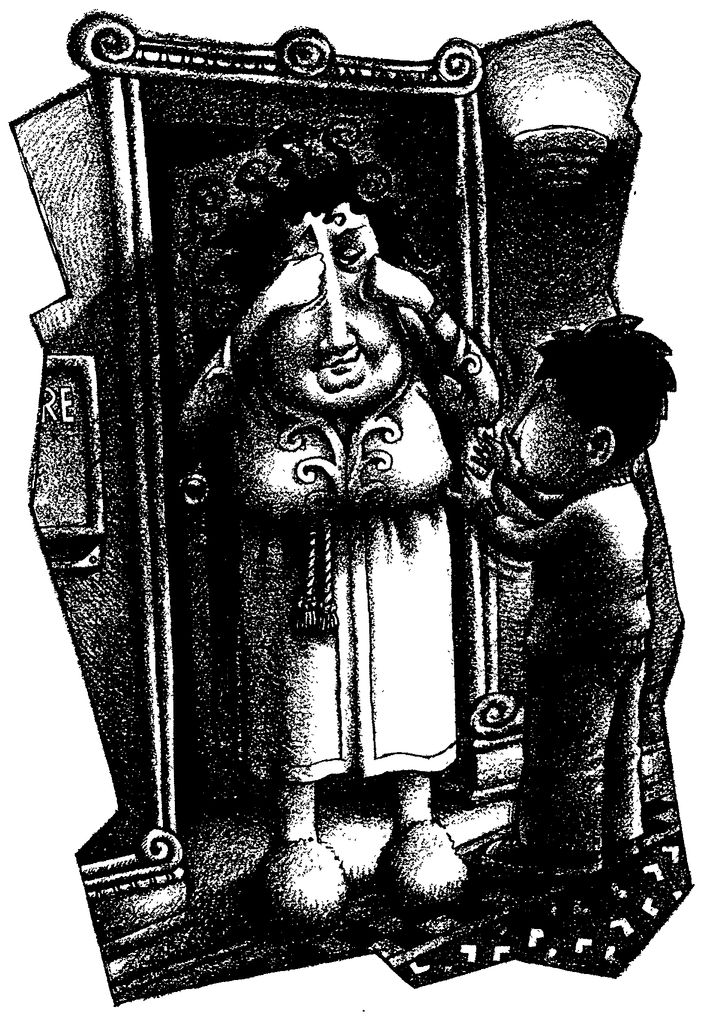 I went in.
Weird. Everywhere you looked, there were stuffed animals. And I don't mean cuddly teddy bears, either. I mean real dead animals that were stuffed by a taxidermist. Squirrels, rabbits, beavers, chipmunks. They were all frozen in weird poses. And they stared at you through their beady glass eyes. They really gave me the creeps.
I hurried into the bathroom and looked around. There was no retainer on the floor or anywhere else. I opened the medicine cabinet. I pushed against the back. It didn't budge. So I closed the medicine cabinet door.
“Satisfied?” she hissed.
I had a sudden feeling that if I didn't leave, her eyes would start glowing red. Then she'd grab me and try to stuff me. There I'd be, standing alongside the other animals in a weird frozen pose, staring at visitors through beady glass eyes.
I apologized and hotfooted it back to my dad's apartment. I didn't have a clue what had happened. I began to think I'd dreamed the whole thing. But if I did, then where was my retainer?
On the way back to my bedroom, I passed my bathroom. Out of the corner of my eye I thought I saw something.
My medicine cabinet door.
It was slowly creeping open.
Chapter 3
Â
Â
Â
I
raced into my bathroom. I -yanked open the door of the medicine cabinet all the way.
There he was! The same boy I'd seen before.
“Hey!” I said.
He didn't slam the door this time. I think he was too stunned. He kept staring. I was staring too. He really did look a whole lot like me. Only his teeth were a lot more crooked.
“Who are you?” I asked.
“Zeke,” he said.
“I'm Zack.”
“I know.”
“You don't live next door,” I said. “Do you?”
He shook his head.
“Then where do you live?”
“Someplace else. Someplace nearby, but kind of far away, too. Someplace you might think is weird.”
“You live in New Jersey?”
He shook his head.
“Then where?”
ADS
15.4Mb size Format: txt, pdf, ePub