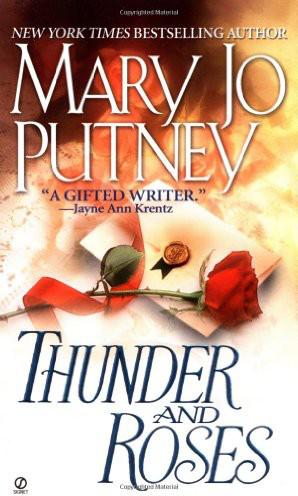 They called him the Demon Earl. They said he could do anything. Son of a rogue and a gypsy, Nicholas Davies was a notorious rake until a shattering betrayal left him alone and embittered in the Welsh countryside.

Desperation drives quiet schoolteacher Clare Morgan to ask the Demon Earl to help save her village. Unwilling to involve himself in the problems of others, Nicholas sets an impossible price on his aid—only if Clare agrees to live with him for three months, letting the world think the worst, will he intervene.

Furiously, Clare accepts his outrageous challenge, and finds herself drawn into a glittering Regency world of danger and desire. As allies, she and Nicholas fight to save her community. As adversaries, they explore the hazardous terrain of power and sensuality. And as lovers, they surrender to a passion that threaten the very foundations of their lives. …

To Marianne and Karen,

two of my favorite females

Winter mists swirled about as they scaled the wall that enclosed the estate. The ghostly landscape proved empty of human life, and no one saw the intruders drop from the wall and make their way across the carefully tended grounds.

Softly Nikki asked, “Will we steal a chicken here, Mama?”

His mother, Marta, shook her head. “Our business is more important than chickens.”

The effort of speaking triggered a coughing spell, and she bent over, thin body shaking. Uneasy and distressed, Nikki touched her arm. Sleeping under hedges was making the cough worse, and there had been little to eat. He hoped that soon they would return to the Romany kumpania, where there would be food and fire and fellowship.

She straightened, face pale but determined, and they continued walking. The only color in the winter scene was the garish purple of her skirt.

Eventually they emerged from the trees onto a swath of grassy turf that surrounded a sprawling stone mansion. Awed, Nikki said, “A great lord lives here?”

“Aye. Look well, for someday this will be yours.”

He stared at the house, feeling an odd mixture of emotions. Surprise, excitement, doubt, finally disdain. “The Rom do not live in stone houses that kill the sky.”

“But you are didikois, half-blood. It is right that you live in such a place.”

Shocked, he turned to stare at her. “No! I am
tacho
rat, true blood, not Gorgio.”

“Your blood is true for both Rom and Gorgio.” She sighed, her beautiful face drawn. “Though you have been raised as a Rom, your future lies with the Gorgios.”

He started to protest, but she shushed him with a quick hand motion as
hoofbeats
sounded. They withdrew into the shrubbery and watched two riders canter up the driveway and halt in front of the house. The taller man dismounted and briskly climbed the wide stone steps, leaving his mount to the care of his companion.

“Aye. That must be the Earl of Aberdare,” Marta murmured. “He looks just as Kenrick said.”

They waited until the tall man had gone inside and the groom had taken the horses away. Then Marta beckoned to Nikki and they hastened across the grass and up the steps. The shiny brass doorknocker was shaped like a dragon. He would have liked to touch it, but it was too high.

Instead of knocking, his mother tried the doorknob. It turned easily and she stepped inside, Nikki right on her heels. His eyes widened when he saw that they were in a marble-floored hall large enough to hold an entire Romany kumpania.

The only man in sight wore the elaborate livery of a footman. An expression of comical shock on his long face, he gasped, “Gypsies!” He grabbed a
bellpull
and rang for assistance. “Get out this instant! If you aren’t off the estate in five minutes, you’ll be turned over to the magistrate.”

Marta took Nikki’s hand in hers. “We’re here to see the earl. I have something of his.”

“Something you stole?” the footman sneered. “You’ve never been that close to him. Be gone with you.”

“Not bloody likely,” the footman snarled as he advanced.

Marta waited until he was close, then darted to one side.

Swearing, the servant swerved and made a futile grab at the interlopers. At the same time, three more servants appeared, summoned by the
bellpull
.

Fixing a fierce gaze on the men, Marta hissed with practiced menace, “I must see the earl! My curse will be on any man who tries to stop me.”

The servants stopped dead in their tracks. Nikki almost laughed aloud at their expressions. Though she was only a woman, Marta easily baffled and frightened the Gorgios. Nikki was proud of her. Who but a Rom could wield such power with mere words?

His mother’s hand tightened on his and they backed away, deeper into the house. Before the servants could shake off their fear, a deep voice boomed,

“What the devil is going on?”

Tall and utterly arrogant, the earl strode into the hall. “Gypsies,” he said with disgust. “Who allowed these filthy creatures to come inside?”

Marta said baldly, “I have brought your grandson, Lord Aberdare. Kenrick’s son—the only grandchild you will ever have.”

The room went dead silent as the earl’s shocked gaze moved to Nikki’s face. Marta continued, “If you doubt me …”

After a shaken moment, the earl said, “Oh, I’m willing to believe this revolting brat might be Kenrick’s—his parentage is written on his face.” He gave Marta the hot, hungry look that Gorgio men often gave women of the Rom. “It’s easy to see why my son would bed you, but a Gypsy bastard is of no interest to me.”

“My son is no bastard.” Marta fished into her bodice and brought out two grubby folded papers. “Since Gorgios set great store on papers, I kept the proof—my marriage lines and the record of Nikki’s birth.”

Lord Aberdare glanced impatiently at the documents, then stiffened. “My son married you?”

“Aye, he did,” she said proudly. “In a Gorgio church as well as in the way of the
Rom.
And you should be glad he did, old man, for now you have an heir. With your other sons dead, you will have no other.”

Expression savage, the earl said, “Very well. How much do you want for him? Will fifty pounds do?”

For an instant, Nikki saw rage in his mother’s eyes. Then her expression changed, becoming cunning. “A hundred gold guineas.”

The lord took a key from his waistcoat pocket and handed it to the oldest servant. “Get it from my strongbox.”

Nikki laughed aloud. Speaking in Romany, he said, “This is the finest scheme ever, Mama. Not only have you convinced this stupid old Gorgio that I am of his blood, but he is willing to give you gold! We will feast for the next year. When I escape tonight, where shall I meet you—maybe by the old oak tree that we used to get over the wall?”

Marta shook her head and replied in the same language. “You must not run away, Nikki.

The Gorgio truly is your grandfather, and

xv this is your home now.” Briefly her fingers fluttered through Nikki’s hair. For a moment he thought she would say more, for she could not possibly mean what she had said.

The servant returned and handed Marta a jingling leather purse. After expertly evaluating the contents, she raised her outer skirt and tucked the purse into a pocket in her petticoat. Nikki was shocked at her action—didn’t these Gorgios know that she had contaminated them, made them
marhime
, by raising her skirt in their presence? But they were oblivious to the insult.

She gave Nikki one last stare, and there was wildness in her eyes. “Treat him well, old man, or my curse will follow you beyond the grave. May I die tonight if this is not so.”

She turned and walked away across the polished floor, her layered skirts swirling. A servant opened the door for her. Inclining her head like a princess, she stepped outside.

With sudden horror, Nikki realized that his mother was serious—she truly did mean to leave him with the Gorgios. He raced after her, screaming, “Mama, Mama!”

Before he could reach her, the door swung shut in his face, trapping him in the sky-killing house. As he grabbed the knob, a footman caught him around the waist. Nikki kneed the man in the belly and clawed at the pale Gorgio face. The servant bellowed and another came to help.

Feet and fists flailing, Nikki yelled, “I am Rom! I won’t stay in this ugly place!”

The earl frowned, revolted by the display of raw emotion. Such behavior must be beaten out of the brat, along with every other trace of his Gypsy blood. Kenrick had also been wild, spoiled by his doting mother. It was the news of Kenrick’s death that had brought on the apoplexy that had turned the countess into the living corpse that she was now.

Harshly the earl ordered, “Take the boy to the nursery and clean him up. Burn those rags and find something more suitable.”

It took two men to subdue the boy. He was still wailing for his mother as they carried his thrashing figure up the stairs.

His face a bitter mask, the earl looked again at the documents that proved that the dusky little heathen was the earl’s only surviving descendant.

Nicholas Kenrick Davies, according to the registration of his birth. It was impossible to doubt the bloodlines; if the boy weren’t so dark, he might almost have been Kenrick at the same age.

But dear God, a Gypsy! A dark, foreign-looking, black-eyed Gypsy. Seven years old and as adept at lying and thievery as he was ignorant of civilized living. Nonetheless, that ragged, filthy creature was the heir to Aberdare.

Once the earl had prayed desperately for an heir, never dreaming that his prayers would be answered in such a way. Even if his invalid countess died and left him free to remarry, the sons of a second wife would be
superceded
by that Gypsy brat.

As he thought, his fingers clenched on the papers. Perhaps, if he was ever able to remarry and have more sons, something could be done. But meanwhile, he must make the best of the boy. Reverend Morgan, the Methodist preacher in the village, could teach Nicholas reading and manners and the other basics required before he could be sent to a proper school.

The earl turned on his heel and entered his study, slamming his door against the anguished cries of “Mama! Mama! Mama!” that echoed sorrowfully through the halls of Aberdare.

They said he could do anything.

Only the last claim interested Clare Morgan as her gaze followed the man racing his stallion down the valley as if all the fires of hell pursued him. Nicholas Davies, the Gypsy Earl of Aberdare, had finally come home, after four long years. Perhaps he would stay, but it was equally possible that he would be gone again tomorrow. Clare must act quickly.

The Way Of The Sword by Chris Bradford
Wormwood Echoes by Laken Cane
Winter at the White Oaks Lodge by Abbie Williams
Ginger's Heart (a modern fairytale) by Katy Regnery
First Admiral 02 The Burning Sun by Benning, William J.
Return of the Prodigal Son by Langan, Ruth
The Watchers on the Shore by Stan Barstow
Anything Can Be Dangerous by Matt Hults
The Sleeping World by Gabrielle Lucille Fuentes
Afterwards by Rachel Seiffert