Read Till Dawn with the Devil Online

Till Dawn with the Devil (29 page)

“My brother undoubtedly will want me to reside with him,” Regan brazenly lied. “However, it might be prudent to remain here until I have had a chance to speak to him.”

Nina shut the book that she had been reading, and placed it on her lap. “Good heavens!”

Regan tried to appear innocent. “I beg your pardon?”

Her friend rolled her eyes heavenward. “I cannot believe your audacity. Now tell us the truth, is your brother aware that you are in Town?”

Thea gasped. “But you told Mama—”

Regan gave her friends an exasperated look. “Be sensible. Our recent travels have added to the delays in my correspondence with my brother. While Frost is looking forward to seeing me”—she crossed her fingers behind her back and prayed that her words were true—“he most likely has not received my last letter.”

There was no reason to tell Thea and Nina
that Frost was expecting to see her in August when he returned to the family’s country estate.

Her arrogant brother had not mentioned London at all.

Thea thought Regan’s explanation was sound. “Should we send a messenger to his town house?”

Unconvinced, Nina glanced at Thea and then Regan. She nodded, silently agreeing to whatever plan Regan had concocted. “Or that club he frequents. Oh, what is it called?”

“Nox,” Regan absently replied, rising from her chair. With Frost’s letter in her hand, she gracefully strolled over to the small fireplace. “I do not believe that will be necessary, ladies. Some messages are best delivered in person.”

Her banishment was finally over.

Dare smoothed his hair back before he pulled the crimson drapery aside and entered the private theater box that Hunter had rented for the season. His late arrival would likely provoke a few comments from his friends.

Frost did not disappoint him.

With his chair positioned at an angle to accommodate his long legs, the earl grinned up at him. “Why, a good evening to you, Lord Hugh!”

Dare stepped over his friend’s legs and nodded to Hunter and Saint, who had yet to take their
seats. “Keep your nasty wit to yourself, Frost. I know that I am late. It could not be helped.”

Frost pivoted, pulling his legs in as he faced Dare. “How kind of you to join us this evening. I must confess when I espied Lady Pashley sitting alone in her box, I feared that your honorable nature might rear its ugly head and put an irreparable blight on our promising evening.”

“If true, Dare’s honor might not be the only head rising this evening,” Saint muttered to Hunter as he nudged the duke.

Dare acknowledged his friend’s ribald comment with a low chuckle. He peered out into the sea of private boxes in search of his brother’s marchioness. He spotted her one tier down. Another couple had joined Allegra, and with luck, they would remain at her side for the evening.

“Unlike you, Frost, manners and duty may dictate me to stop by Lady Pashley’s private box to pay my respects. Nevertheless, I have no inclination to tarry.”

“While you may find this difficult to believe, another lady has engaged my attentions this evening.” Dare was in too good of a mood to be annoyed with Frost. “Mrs. Randall has invited me to call on her after Lord and Lady Quinton’s ball.”

Frost’s eyebrows slid upward as he nodded with begrudging approval. Hunter and Saint offered their congratulations. The lovely twenty-eight-year-old widow had come out of mourning
last season. She had rejected all suitors, and as far as anyone knew, all potential lovers. The young widow had even been impervious to Frost’s charms.

“I assume you expect us to join you at Lord and Lady Quinton’s ball?” Frost said, casting a sly glance in Lady Pashley’s direction.

Dare braced his palm against the back of his friend’s chair and stared directly into Frost’s turquoise eyes. “Mrs. Randall never mentioned me joining her at the ball. Nor would she approve of me bringing the likes of you along to her town house.”

“Widows are daring creatures. She might be agreeable with the proper enticement,” Frost said, bringing his gloved hand up to the apex of his trousers to make his vulgar point.

All four men laughed, earning them several curious looks from the nearby boxes. Dare sat down beside Frost. He was looking for another subject to distract his friend when Saint came to the rescue.

“Has anyone heard from Reign or Sin this evening?”

Hunter slid into the seat in front of Dare. “Sin will join us later. His wife decided to sit with her mother and sisters this evening.”

A noncommittal noise rumbled in Frost’s throat. He did not exactly approve of Lady Sinclair, and the lady did not hide the fact that she was merely tolerant of Frost for her husband’s sake.

Hunter gave their friend a bemused glance. “Show some respect, Frost. Lady Sinclair is expected to deliver the Sinclair heir sometime in September. Sin is just protective of his lady.”

“Worse than Sin, now that he is a father.” Saint crossed his arms across his chest and braced his stance by bending his left knee. “He left London five days ago to collect his wife and infant daughter. Reign did not want them travelling alone.”

Dare could not blame Reign. He had never seen a gentleman so besotted. Last season, when Reign had encountered Lady Sophia Northam at a ball, he had fallen hard for the demure blonde. Reign had had the lady wedded, bedded, and with child before the season had ended.

“Another good man . . .” Frost mumbled, the rest of his sentence unintelligible but his meaning clear to his friends.

Frost enjoyed ladies as well as any other gent. He just did not view them as anything permanent in a man’s life. As far as the earl was concerned, marriage had ruined Sin and Reign.

To some degree, Dare silently agreed with Frost. His older brother’s marriage to Allegra was a miserable union, and Reign’s first marriage to Miss Roberts had been an unmitigated disaster. Still, both Reign and Sin seemed happy in their recent marriages. Dare did not begrudge his friends their newfound bliss.

While Saint regaled them with Vane’s latest
mischief, Dare let his gaze wander from private box to private box. He immediately spotted Lady Sinclair. Seated beside Lady Harper, the marchioness was engrossed in a discussion with one of her sisters. Sin was nowhere in sight.

Dare moved on to another private box, recognizing some of the patrons as his gaze glided from box to box until he found her. It meant nothing if his gaze lingered on Allegra. After all, she was a beautiful woman. If his heart ached, it was his own damn business. Before his older brother had stolen her from him, Allegra had been his.

Frost often teased him about Allegra, but his friend did not understand Dare’s inner conflict. While a part of him would always love the lady, he also hated her. His familial obligations kept him tethered, and he seemed doomed to never be quite free from her.

And his brother enjoyed Dare’s torment.

Before he could dwell further on his dark thoughts, a glint of amber caught Dare’s eye, distracting him from Allegra’s private box. One tier up and two boxes to the right, a dark-haired lady in an amber evening dress presented her elegant profile to him. Captivated, he watched as the silken fabric of her dress gleamed like the sun as the candlelight from the chandeliers played across the angles of her puffed sleeves and skirt. Her dark tresses had been pulled high, and only a few curls near her hairline escaped. The lady’s pale creamy skin was untouched by the sun, and yet,
even in the dim interior of the theater, her skin glowed with health and vitality.

Dare watched as she extended her gloved hand to a gentleman who had slipped into their private box to pay the woman and her female companions his respects. Slightly envious that the gent had discovered the lady in amber before he had, Dare leaned forward as he watched the silent courtship play out for his eyes. The young woman smiled and gestured as she formally introduced her friends. The gentleman bowed, his eyes remaining on his amber prize.

He did not seem worthy of such a lady. The gentleman was older, and possessed a weak chin. Possibly two. A lady of wealth and beauty could do better. The three gentlemen entering the crowded box must have thought the same thing.

Dare stood when the young woman brought her hand to her heart, and then practically threw herself into the arms of one of her would-be suitors. His gaze narrowed as recognition flooded his envious heart.

“What the devil—is that
Vane
?” Dare said, his voice infused with such fury that Frost, Hunter, and Saint ceased speaking and stared at him with varying degrees of amazement.

He could not blame them for their curiosity. Dare did not understand his reaction himself. A small part of him was still half tempted to leap from box to box until he reached Vane so he
could personally have the pleasure of tossing the rogue headfirst into the pit.

What spared him was that the woman in amber released Vane and stepped back. At Vane’s urging, she looked across the interior of the theater. Dare inhaled sharply as his hungry gaze drank in her beauty. Familiarity tickled his senses, but it was elusive. Unexpectedly their gazes locked, and the dark-haired beauty seemed almost as startled as he was by the impact.

The last time Dare had seen her endearing face, it had been sullied by soot and grime.

“Gents!” Sin said, bursting through the closed curtains at the back of their private box. He was grinning from ear to ear. “Why did no one tell me that our little Regan had come home?” 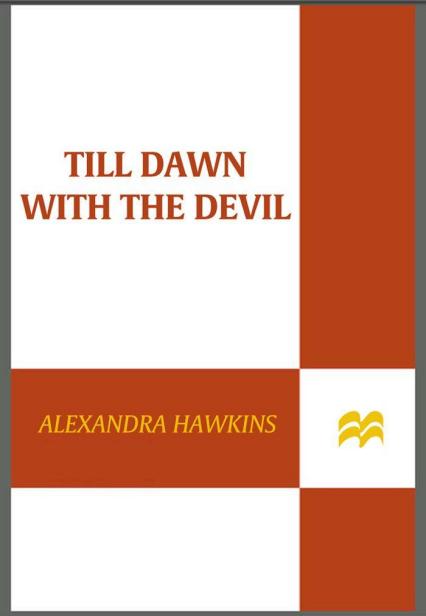