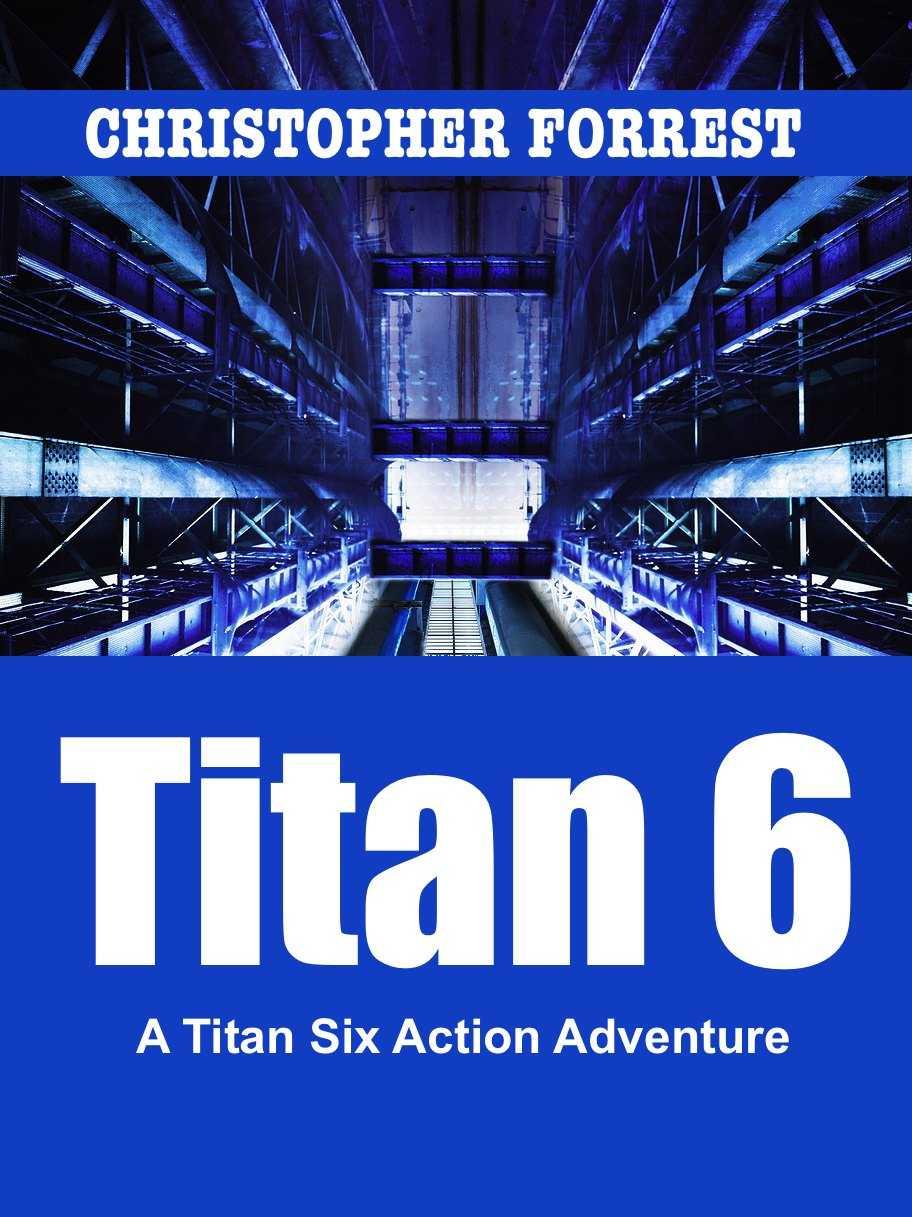 ALL RIGHTS RESERVED. This book contains material protected under International and Federal Copyright Laws and Treaties. Any unauthorized reprint or use of this material is prohibited. No part of this book may be reproduced or transmitted in any form or by any means, electronic or mechanical, including photocopying, recording, or by any information storage and retrieval system without express written permission from the author or publisher.

Christopher Forrest has lived on a sailboat, explored Mayan ruins in the jungles of Central America, been struck by lightning, free-dived the barrier reefs off the coast of Belize, and solo-hiked through the Everglades.

He is the bestselling author of The Genesis Code, Savage Bay, Bones of Angels and Temple of Fire.  Hard at work on his next Titan Six novel, Forrest lives in Sarasota, Florida, with his wife Amy and four chihuahuas who think they are people.

From New York Times bestselling author
DOUGLAS PRESTON
: "
Launches the reader into a story of science and ancient mystery that will blow your mind
."

Beneath the Rocky Mountains

The Russians had backed down in October, had ordered their cruisers to turn around and head away from Cuba.  Nuclear catastrophe had been averted, but the United States now knew that the Soviets were not above trying to furtively place deadly weapons in the western hemisphere.  Outwardly, nuclear disarmament would be pursued.  Behind the scenes, however, the United States would make sure its arsenal would be as lethal and as ready as that of the Soviet Union.

The first tunnels and caverns created to hide America’s vast array of nuclear missiles were beneath the Rocky Mountains.  Government plans called for such areas across the entire continent, to be connected by a sophisticated transportation system.  No spy satellites would be able to detect the movement of weapons while the president tried to make the Russians realize that there were no winners in a nuclear exchange.

The general looked about the large cave that the Army Corps of Engineers had created.  It was an engineering marvel.

“General!” called a voice from across the dimly lit underground vault.  “Come quickly!  You’ve got to see this!”

The general strode toward the voice, which belonged to the colonel who was in charge of creating the underground transportation and storage system.

The general hoped he wasn’t being invited to look at another unusual rock formation that fascinated his engineers but, quite frankly, bored him to no end.

The two men walked down a dark tunnel, flashlights in hand.

“There!” said the excited colonel.  “We don’t know what to make of it.”

“It’s just a small piece of square metal embedded in the rock,” the general said.  “Maybe a foot on every side.  There must be a fortune in metals under these mountains, but that’s not what I’m interested in.”

“But it’s flat and smooth,” the colonel protested.  “It can’t be a natural outcropping.”

The general was irritated.  “These mountains have shifted a great deal over the years,” he said.  “Probably some object from hundreds of years ago.”

The general jumped back several feet.  The mysterious metal shot forth a square beam of white light, striking the body of the engineer.  The colonel’s entire body was suddenly visible, as if he were standing before an X-ray machine.  His skeleton was plainly visible.

“I can see the entire universe!” the colonel cried.  “It’s all so simple.  I understand it now.”

“What are you babbling about?” the general asked uneasily, stepping even farther away from the light.

The colonel turned and smiled as his body gradually dissolved into nothingness.

It was the colonel’s voice.

Back in the vaulted cavern, the general bent over, hands on his knees and breathing hard.

He would indeed return, although he’d bring dozens of armed guards with him.  And scientists, ones he could trust to be discreet.  Something was buried beneath the Rockies, something powerful and unique.  Maybe it was a Russian satellite that had burrowed its way into the mountain.  Maybe it was a source of power.

Or maybe it was much more.  Whatever the object was, the general had the intuition that it was going to be of great use.

He would tell a few of his closest allies about the discovery, but not his superiors.  And he most certainly wasn’t going to report that his main engineer had turned into a ghost.  He’d simply say that the colonel had fallen down a deep chasm.

The general whistled as he reached for his walkie-talkie in order to gather the rest of his party.  Sometimes gifts just fell into one’s lap.

Beneath the Rocky Mountains

Sergeant Frank Dixon and Major Hank Gunderson rode the maglev train running northeast deep beneath the Rocky Mountains.  The soldiers were members of the U.S. Army Corps of engineers, and they were touring the Pentagon’s underground tunnel project begun shortly after the Cuban Missile Crisis.

The maglev — or magnetic levitation train — glided smoothly over its guideway at incredible speed beneath the surface of the earth.  The train had no wheels or conventional engine, but instead hovered over the guideway, which had electronic coils built into its walls.  Along the entire “track,” magnetic fields were generated by the coils, causing the train to levitate and propel itself forward because of opposing magnetic forces.

The maglev was part of SURP, the Secret Underground Rail Project.  SURP also included monorails and consisted of a coast-to-coast network of trains and tunnels by which the United States military could ship both conventional weapons and nuclear missiles anywhere in the country undetected by Soviet satellites.  The train tunnels were forty feet in diameter and ran across the continent, mostly under mountain ranges: the Sierra Nevadas, the Cascades, the Rockies, the Ouchitas, the Appalachians, the Adirondacks, the Berkshires, and the White Mountains.  Other tunnels, leading to offices and storage facilities, were narrower.  The network contained seven thousand miles of tunnels, and at times ran beneath the hard strata of the nation’s heartland.

The maglev slowed, and Sergeant Dixon and Major Gunderson exited the train as it pulled into a cavernous space, one of the many stations in the SURP rail system.  Dixon was a slightly green thirty-one-year-old officer with acne and spoke in a high-pitched voice.  Gunderson was a gruff, stereotypical fifty-year-old soldier who constantly chewed on the end of a cigar.

The air was cold and damp in the mammoth vault created by the Corps of Engineers.  The three-car train settled quietly onto its guideway as the two officers inspected the cavern, which was one of hundreds where warheads, missile stages, and booster rockets were unloaded and stored until their final destination was determined by the grand high muckety-mucks at the Pentagon in Washington.

Before the officers was a Titan II rocket, the exact same kind of missile used to launch astronauts in the Gemini Space Program.  It was also the rocket of choice for ICBMs, or Intercontinental Ballistic Missiles, which had a range of over 3,500 miles.

Smaller underground vaults housed the actual warheads, which were hundreds of times more powerful than those that had blossomed into deadly mushroom clouds over Hiroshima and Nagasaki.

Eventually, both rockets and warheads were shipped to missile silos at hundreds of spots across the country.  Many Midwestern farms were owned and operated by the government, and Titan II rockets were housed beneath farm silos, not grain or corn.

Dixon and Gunderson saluted the guards around the Titan II and proceeded into a smaller tunnel that was not on their network map.

“Guess the boys cut a new one into the rock when we weren’t looking,” Dixon joked.

“We’re far from finished,” Gunderson said dryly.  “We’re creating a labyrinth that even the Minotaur couldn’t find its way out of.”

Dixon frowned.  “The Mino what?”

Gunderson shot an annoying look at his junior officer.  “The Minotaur from Greek mythology.  The offspring of a white bull and the wife of King Minos.  It had the head of a bull and the body of a human.  Minos asked Daedalus to create a labyrinth so complex that the Minotaur could never escape from it.  Later, the hero Theseus — ”

Gunderson looked at Dixon, who wasn’t assimilating anything the Major was saying.

“Students don’t read the classics anymore,” he mumbled under his breath.  “A damn shame, is what it is.”

They reached the end of the tunnel, which morphed into a corridor with overhead fluorescent lighting.  Two Marine guards wearing white belts and helmets flanked a sliding door accessed via keypad.

“Sorry, Major,” said the first guard.  “This is a classified area.”

“Excuse me, private,” Gunderson said brusquely, “but I have full clearance for the entire SURP network.  I have the access code.”

Gunderson reached out to enter the code on the keypad.  The second guard stepped sideways and blocked his path, rifle angled across his chest.

“The rest of this tunnel is not considered part of the SURP network, sir,” said the first guard.

Gunderson glanced at Dixon, who shrugged.

Gunderson shifted the cigar to the other side of his mouth.  “We’ll be back, private,” he said.  “Mark my word.  This is some kind of bureaucratic error.”

Gunderson and Dixon turned and retraced their steps.  Thirty paces from the lighted corridor, Dixon slumped against the cold rock wall of the tunnel.  His mouth hung open, and his eyes, large white orbs, were filled with terror.

Gunderson reached down to pick up the greenhorn.  He felt dizzy for a few seconds as he grabbed Dixon’s clammy skin.

Let’s get back to the maglev,” Gunderson said.  “Somebody owes us an explanation.”

Ten minutes later, the two were back on the train, headed east.

Gunderson was a cool, rationale man.  He was also tough, a no-nonsense officer who intended to continue climbing the ranks.  What he dared not share with the Sergeant was that he, too, had seen the Minotaur.  It was a fleeting glance, and the hybrid creature looked transparent, diaphanous.  And very menacing.

But he had definitely seen it.