Read To Tame A Rebel Online

To Tame A Rebel 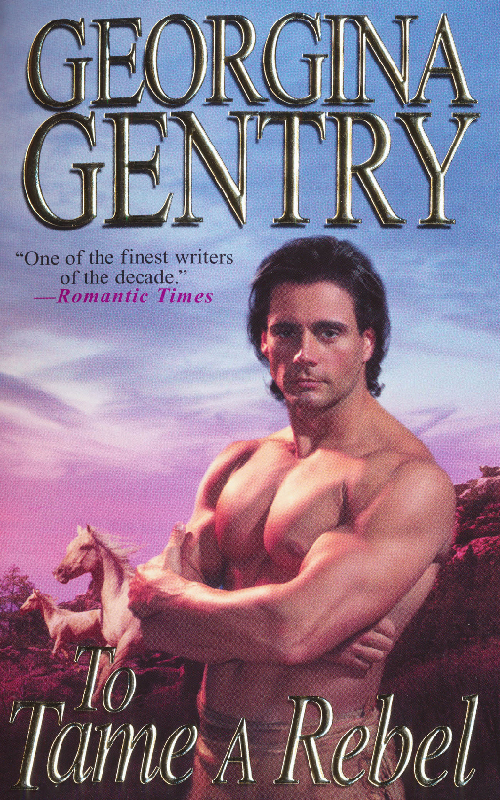 FRIENDS . . . AND ENEMIES
Yellow Jacket reached up and touched his throbbing head and came away with fingers smeared with blood. He hadn't a chance of catching his horse and outriding the rebel patrol.
Somewhere out there, he heard a horse coming through the brush. A white man yelled, “Jim, you go down that draw; see what you can find.”
“Yes, sir.” The rider came toward Yellow Jacket, twigs snapping under his horse's hooves.
Yellow Jacket grabbed for the big knife in his beltâno good against a rifle. Besides, even if he could find his rifle, a shot would bring the whole rebel patrol down on him. He hunkered down as flat on the dead grass as he could, and waited. Up ahead, a tall, handsome Indian wearing the gray uniform of rebel cavalry pushed through the dead brush and dismounted. In one hand the man carried a rifle; in the other, a pistol. He came on now carefully and silently as a man skilled in tracking human game.
Wohali.
Jim Eagle. Yellow Jacket recognized the Cherokee Lighthorseman immediately. He clutched his knife and waited, hardly daring to breathe.
At that moment, Jim Eagle seemed to see Yellow Jacket for the first time. He froze in place, staring as though he could not quite believe what he saw. In the distance a white commander yelled, “Jim, you see anything? You need any help?”
For a heart-stopping moment Jim Eagle stared at the trapped, bloody man while the other held his breath. Once they had been friends. Now they were enemies because of a white man's war.
The Cherokee looked at Yellow Jacket a moment longer. He still clutched his rifle, and at this distance he could not miss. Then he turned his head and yelled back over his shoulder, “No, Lieutenant, there's nobody down this trail.”
Yellow Jacket took a deep breath. Jim Eagle smiled at him and saluted him. Yellow Jacket saluted him back and whispered, “Thank you, old friend.”
PREVIOUS BOOKS BY GEORGINA GENTRY
APACHE CARESS
APACHE TEARS
BANDIT'S EMBRACE
CHEYENNE CAPTIVE
CHEYENNE CARESS
CHEYENNE PRINCESS
CHEYENNE SPLENDOR
CHEYENNE SONG
COMANCHE COWBOY
ETERNAL OUTLAW
HALF-BREED'S BRIDE
NEVADA DAWN
NEVADA NIGHTS
QUICKSILVER PASSION
SIOUX SLAVE
SONG OF THE WARRIOR
TIMELESS WARRIOR
TO TAME A SAVAGE
TO TAME A TEXAN
WARRIOR'S HEART
WARRIOR'S HONOR
WARRIOR'S PRIZE
TO TAME A REBEL
Georgina Gentry

How You Take Me by Natalie Kristen
Raven's Peak by Lincoln Cole
Jo's Journey by S. E. Smith
Alyssa Everett by A TrystWith Trouble
The Unexpected Ally by Sarah Woodbury
A Four Letter Word by Michelle Lee
Slum Online by Hiroshi Sakurazaka
Dragonslayer (Twilight of the Gods Book 3) by Eleri Stone
Her Darkest Desires by Dane, Kallista
For the Sake of Love by Dwan Abrams