Read To Tempt a Saint Online

To Tempt a Saint 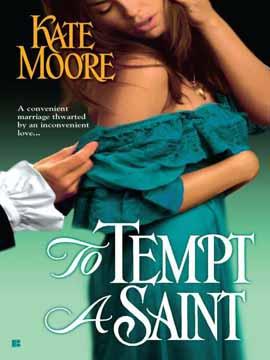 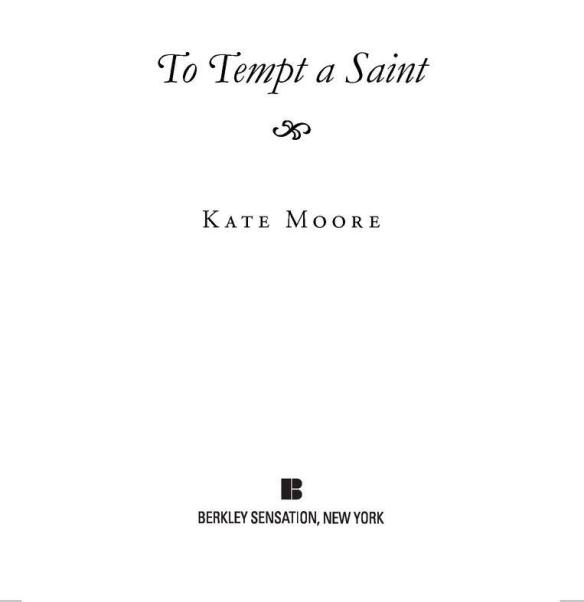 For Pamela Ahearn,
an agent with a silk suit,
a BlackBerry, a sense of humor,
and endless faith in her authors, with thanks.
“I will that every child be his father’s heir
after his father’s day.”
CHARTER TO THE CITY OF LONDON
FROM WILLIAM THE CONQUEROR
Prologue

LONDON, 1816
T
HE fight was not a fight, just a brief, bloody proof that title trumps presumption. Still, Xander Jones had to admit that nothing united a London crowd like shared delight in violence. Dukes and draymen roared with one voice when the champion’s fist leveled the challenger. Boxing’s famed Fives Court, and possibly all Leicester Square, rang with the sound.
Within minutes costermongers and Corinthians, in perfect amity, began to jostle their way into the night, oblivious of rank. Only the Marquess of Candover failed to catch London’s new democratic spirit, stepping back with a contemptuous curl of his lip from a near meeting with his bastard son.
Some lines were not meant to be crossed.
Xander kept his brother Kit in front of him, his hands on the boy’s shoulders, steering a path away from the marquess. No sense in spoiling a brotherly outing.
“Did you see his left, Xander?” Kit jabbed the air, mimicking the champion’s trademark move. “The champion planted him a real facer.”
“
A facer
?”
“That’s what sporting men say.”
“As long as you don’t say it at home.” Xander turned Kit’s shoulders, directing an awkward but earnest blow away from the purple silk waistcoat of a stout gentleman engaged in settling a side bet. The man gave them a fixed stare.
Xander waved off friends headed for further entertainment. Their evening would likely start in the public rooms of a well-known establishment in Piccadilly and end in the private ones of a more notorious place in Covent Garden.
Xander found he preferred his plan for supper with Kit. Beef pies and porter had been mentioned. Not that Kit was ready for spirits, but Xander smiled at the idea. A year ago he would have resented having the charge of his youngest brother. Now he didn’t mind their London rambles even though they inevitably ended in maternal reproaches that Xander was far too old to endure. He thought his mother a fearless woman, but lately she imagined footpads or worse lurking in every dark lane, waiting for boys not tucked in bed by ten.
The crowd bunched up ahead of them at the pavement, where it split undemocratically into two factions—men with waiting vehicles and their inferiors. Xander steered Kit away from a pile of steaming dung, and in deference to his mother’s fears, headed the boy toward a side lane that skirted more dangerous streets.
“Mother doesn’t like you to take me to mills, does she?”
“Best to keep it our secret.”
“May not gentlemen enjoy boxing?”
“Many do.” No use denying what Kit himself could see. The cabinet could have settled the business of the nation at tonight’s match.
“But not our sort of gentleman?”
“Exactly.” Their sort of gentleman, the well-bred bastard, had to be a social contortionist, fitting himself to his company.
“Because our fathers did not marry our mother?”
There it was, out in the open, the reason behind Kit’s new passion for boxing. In school a boy could fight till his knuckles were raw, and there would always be another sapskull to make a remark about Sophie Jones. Kit, fair-haired and small for his age, would find it rough going to defend their mother’s honor.
A familiar anger gripped Xander. He shook it off as nothing more than a delayed reaction to the chance sighting of his father. Neither the gods nor the British legal system was likely to stand up for bastards. A cool head and quick left hand would be of more use to Kit than cargo holds of anger at the going rate. “A lucky thing for us that our mother doesn’t marry her lovers, infant.”
“Not if we can’t go to mills.”
“Ah, but if
my
father had married
our
mother, then she wouldn’t have met
your
father, and then where would you be?” They halted to let a lumbering cart pass ahead of them in the narrow lane.
Sophie Jones had had three lovers that Xander knew of in her career as a courtesan. Each had given her a son; the “Sons of Sin” their brother Will called them. Made by wickedness for wickedness, a theory Will meant to prove among the paid-out soldiers of several armies in the most debauched hells in Paris.
Sophie’s efforts to make gentlemen of her sons were laughable, Xander supposed, when she herself knew better than most how gentlemen behaved in London. Still, being a bastard son of a notorious courtesan had its advantages.
Their mother had taught them how to handle money. No banker had a surer grasp of investment. Her lovers’ gifts of jewels, carriages, horses, and extravagant gowns had become a tidy empire of investments, a comfortable house off Berkeley Square, a gentleman’s education for her sons, and now a snug cottage between the Surrey Hills and the Thames, where she meant to retire in widow-like respectability once Kit was launched in the world. A boy could do worse in a parent.
Her affair with Kit’s father had scandalized London when Xander was seventeen and making his way through university. Then somewhere in India under Wellesley, long after the man’s folly had ceased to be the latest London gossip, the poor fellow had died. Sophie Jones was doubtless the only one who still wore black for him. She had taken no new lover.
ADS
15.4Mb size Format: txt, pdf, ePub

Just Listen by Sarah Dessen
Pink Boots and a Machete by Mireya Mayor
A Night of Southern Comfort by Robin Covington
The Yearning by Tina Donahue
Frostborn: The First Quest by Jonathan Moeller
Thomas Jefferson's Qur'an: Islam and the Founders by Denise A. Spellberg
Beauty and the Bounty Hunter by Lori Austin
Blind Girl: A Dark Billionaire Romance by Kiss, Tabatha
Thigh High by Christina Dodd
The Man Who Was Magic by Paul Gallico