Together Apart: Change is Never Easy 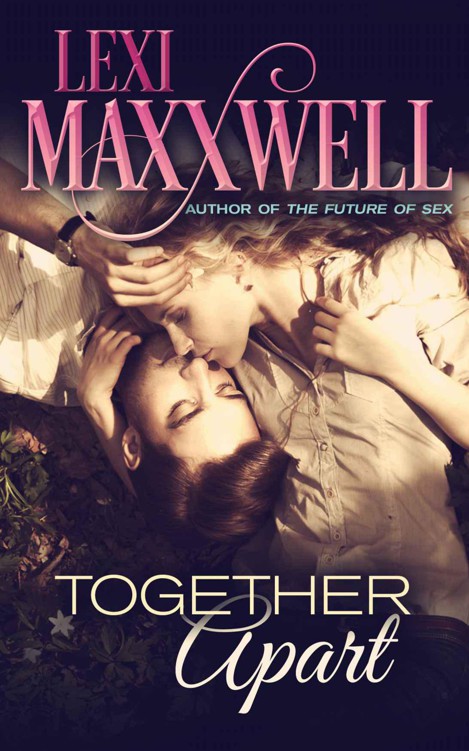 Reproduction in whole or part of this publication without express written consent is strictly prohibited.

The author greatly appreciates you taking the time to read her work. Please consider leaving a review wherever you bought the book, or telling your friends about it, to help her spread the word.

Thank you for supporting Lexi Maxxwell

To my best friend and beautiful daughter.

I hope you find enduring love the first time around.

Welcome to My World

I’m Lexi Maxxwell, Sterling & Stone’s smart but naughty storyteller. I write straight from my heart, and deliver unforgettable reading experiences to people who want to finish their books feeling deeply passionate and more in touch with themselves.

I want you to be a part of my world.

To get early alerts for my books, occasional freebies, and 101 short and sexy stories you can start reading right now, please visit the link at the end of this book.

First, time meant more than it had at any moment before. Two more minutes would make a world of difference to her life, both of their lives. In two minutes, if she’d get around to taking the goddamned test, her future (their future) would fork in one of two directions, and change their lives forever. It was strange to think of all of the two-minute blocks she’d already used this morning, and how none had seemed particularly noteworthy. She’d spent two minutes checking e-mail on her phone. Another two pouring a bowl of muesli for breakfast. And at least a pair bent over the toilet, giving her cereal back to the world. Yet these two minutes — these urgent, must-hurry two minutes — would be different, and couldn’t happen soon enough because the anticipation was exhausting.

Second, she was sure that Morphine’s
Cure for Pain
was probably not an appropriate album to play during those momentous two minutes of waiting. Sam was still pacing the tiles, fidgeting with the toothbrush-sized cardboard box as if fidgeting would make time go faster, and through it all the moody, stuporous music poured into the bathroom from the living room stereo.
Thursday
ended, and the title track began, a song about infidelity replaced by one about sorrow and pain. It wasn’t right — the moment’s soundtrack shouldn’t feel like an opium den. But going out to change the music seemed 1) superstitious, 2) dumb, and 3) like yet another delay tactic. She’d already rotated every bottle in the medicine cabinet so that each label faced out. That was enough.

And third, Sam was scared as hell to start those two urgent minutes ticking.

She sat on the toilet in her pajamas, lid closed, and made herself breathe, internal voices warring within her.

It’s not a big deal.

It’s what we wanted anyway, in the end.

It could help. It could be fantastic.

And besides, it’s not like knowing makes the difference.

The last thought was perhaps the most relevant. If Sam was pregnant, the test made no difference. A positive result wouldn’t
make
an embryo inside her. But still, Sam was so afraid to know.

She held the e.p.t. test in her right hand, slapping the long cardboard box into her left palm as she stared at the pink pastel shower curtain. When she and Zach had moved in, the shower curtain had clowns. Sam thought it was hilarious in a kitschy way, but Zach thought it was creepy. He’d replaced it that first night. Bed Bath and Beyond was closed, so he drove to an all-night Wal-Mart across town. She had asked why he didn’t take the old curtain down and get a new one in the morning, seeing as they’d moved in on a Saturday and Sunday was their day for whatever. Zach had said “because fuck you” then asked if she wanted to come with him. After buying the only shower curtain in stock at that Walmart, they’d stopped for donuts, ate one each in the car and another three when they got back to the alien apartment with its couch along the wrong wall and its absent bed. Zach ordered coffee to dunk his donuts, but forgot to ask for decaf, and so they’d stayed up until 3, talking and making love on the floor, getting rug burn.

They both wanted kids. Really. Had talked about it even back in their college apartment with thin walls and rowdy neighbors. It made sense: two smart kids head to college, learn their trade, get job offers (well, Sam anyway), head off to a new city, get the house with the white picket fence and start popping out rug rats.

But somehow life got in the way, and somewhere in the move from Portland to Memphis the box holding their intention to start a family was misplaced along with Zach’s box of vinyl records. Starting a new job was always time consuming, Zach had seemed to wallow more as his job at the low-end graphic design studio (the best he could find) started to, as he said with his usual smile, “crush his mortal soul.” They had discussed it since their move, and it still made sense in the way things made sense on paper. But they’d need a few years to adjust, to find their feet again. Maybe to figure out whatever had shifted between them.

Sam tore open the box to a sheet of paper full of warnings and instructions. She opened the sheet, her heartbeat suddenly faster, and scanned it. She couldn’t concentrate. Those two minutes were pressing on her. Sam didn’t need comprehensive how-to. She was a big girl. She could figure out how to pee on a stick. Besides, the box itself had the Cliff’s Notes version — the
How to Find Out if You’re Knocked Up For Dummies
.

She could do that.

Sam stood, stripped her PJ’s, opened the toilet so hard she thought the hinge might break, and sat. With a feeling like ripping a Band-Aid from skin, Sam stuck the test into her stream (careful to use it externally as directed), then shook it off. She looked at the time on her phone, then set the test on a tissue at the sink’s edge. It was a little gross, having a peed-on thing sitting on her sink, but she couldn’t think about that. The die had been cast.

Sam had an aunt who found a lump in her breast while showering, then ignored it for three years. She was terminal by the time she finally told her family she had cancer. She hung on for another six months, then the family buried her. Sam, then 7, asked her mother why God had taken Aunt Candace. Sam’s mother, always a straight talker, said through angry tears: “Because Aunt Candace thought that if she went to have her cancer treated, it would give her cancer.” Sam was confused by that, but her mother hadn’t been in a condition to say anything more. Only years later, thinking back, had Sam figured it out. Now, as she looked at the pee-dribbled tissue sitting disgustingly on her skin across from the pink shower curtain that held such delightful memories, she was proud to have crossed the bridge.

Taking a pregnancy test wouldn’t get her pregnant.

And a baby wasn’t cancer.

But in a way, Sam thought, her mind back in college, it was. Cancer was what happened when cells wanted to live so badly that they refused to die when they were supposed to. Cancer was like a life form. It didn’t have a heartbeat, and no one threw you a shower when you got it, but it was a life form nonetheless.

Sam rested on the toilet as she finished, then stood, pulled her pants back up, and turned the toilet back into a flushing chair. Even though alone, Sam felt guilty, thinking as she had been. How many people wanted children but couldn’t have them? And how many cancer patients would be insulted by the way she was comparing herself to them? How many family members would be excited by Sam’s news and aghast at her thoughts? Sam was 25, with professional velocity and a husband who loved her. The timing was perfect.

“Everyone gets nervous,” she said out loud. In the small, dingy apartment bathroom, with Morphine droning in the living room, her voice sounded strange. As if she were whistling in the dark inside a junkie’s hovel.

Sam checked her phone, certain that several hours must have passed. She was halfway there. A minute gone, one left. One minute to change her life. To change
their
lives.

And of course, it
would
change their lives. Regardless of whether Sam’s A.M. barfing turned out to be morning sickness, taking a pregnancy test mattered. They’d been at a strange impasse since moving to Memphis, moving neither forward nor back. In college, they’d been all hands and mouths, powerless to stop themselves from tearing clothing from skin, unable to walk anywhere not arm in arm. Even from the beginning, Zach was unafraid to discuss the future. He never wanted college at all; it was the well-meaning pressure from his life’s influencers that had sent him to UP in the first place, to find a marketable outlet for his substantial artistic talent. Meeting Sam, he’d said, was all that made those influencers correct and school worthwhile. He wanted to be with her, to fuck her, to marry her, to have kids with her, to grow old with her, and to be buried beside her. Back in college, that was all so sweet, forward-thinking. Marriage hadn’t slowed things at all. The job offer had, and Zach hadn’t wanted to leave Portland, and didn’t think an online newspaper job was worthy of Sam’s ample talents. Zach was an artist first and practical second, Sam was the other way around. It was all well and good for Zach to encourage her stories and novels, but how would that pay the bills? So they had moved, and she took the job. They’d lived in limbo since. Happy, not thrilled. In love, but not madly. Satisfied, but (at least in Zach’s case) not really satisfied at all.

Sam hadn’t told Zach how predictably she’d been throwing up in the mornings, and Zach, being a man, hadn’t connected any dots with the vomit he saw. He didn’t know Sam suspected a pregnancy, or how cowardly she felt for acting like Aunt Candace, unwilling to find out.

No matter how the test turned out, the results would break them loose from their rut of running through the motions. If they were having a baby, they would have to buy supplies, read up, and adjust their selfish schedules to accommodate a new arrival. If they weren’t having a baby, they’d know it as a clear and present fact rather than one of omission. There was a difference between never trying to have a baby, and hence never having one, and a near miss. Both scenarios resulted in no baby, but the latter added fresh questions: If they kept having sex, which they would (and fervently), would they keep their birth control in place and know it could fail? Or would they remove it and decide they were ready? Either way, the baby would be there, in their thoughts and bed, whether actually present or not.