Read Tomorrow About This Time Online

Tomorrow About This Time 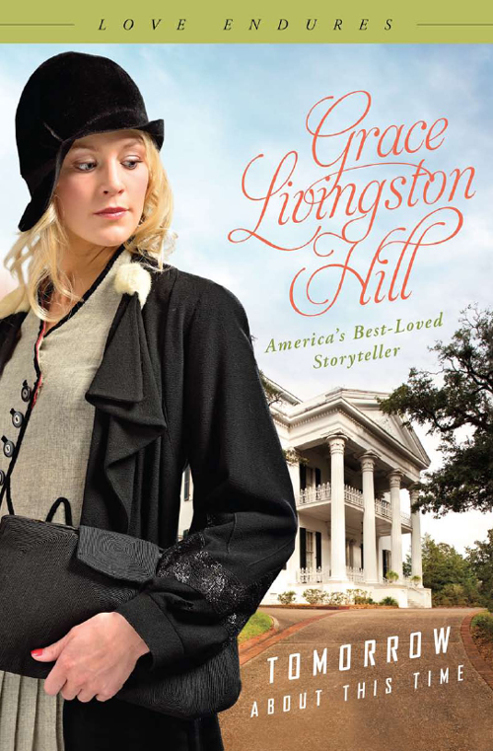 What Christian Authors are Saying about Grace Livingston Hill:

Grace Livingston Hill, often referred to as the “Queen of Christian Romance,” has given millions of readers timeless Christian novels, offering inspiration, romance, and adventure. The simple message in each of her books reminds us that God has the answer to all our questions.

I’ve long been a fan of Grace Livingston Hill. Her romance and attention to detail has always captivated me—even as a young girl. I’m excited to see these books will continue to be available to new generations and highly recommend them to readers who haven’t yet tried them. And for those of you like me who have read the books, I hope you’ll revisit the stories and fall in love with them all over again.

—Tracie Peterson, award-winning, bestselling author of the Song of Alaska and Striking a Match series

Grace Livingston Hill’s books are a treasured part of my young adult years. There was such bedrock faith to them along with the fun. Her heroines were intrepid yet vulnerable. Her heroes were pure of heart and noble (unless they needed to be reformed of course). And the books were often adventures. Just writing this makes me want to hunt down and read again a few of my favorites.

Grace Livingston Hill books were a big part of my life, from the time I was a teenager and onward. My mother loved her books and shared them with me and my sisters. We always knew we could find an engaging, uplifting story between the covers. And her stories are still enjoyable and encouraging. It’s hard to pick a favorite, but
The Girl from Montana
and
Marcia Schuyler
are two of my favorites. Terrific stories!

The hero, in Grace Livingston Hill’s timeless romantic novels, is always a hero. The heroine is always a strong woman who stands up for her beliefs. He is always handsome; she is always beautiful. And an inviting message of faith is woven throughout each story without preaching. These enduring stories will continue to delight a new generation of readers—just as they did for our great-grandmothers.

As a young reader just beginning to know what romance was all about, I was introduced to Grace Livingston Hill’s books. She created great characters with interesting backgrounds and then plopped them down into fascinating settings where they managed to get into romantic pickles that kept me reading until the love-conquers-all endings. Her romance-filled stories showed this young aspiring writer that yes, love can make the fictional world go round.

My grandmother was an avid reader, and Grace Livingston Hill’s books lined her shelves for the years of my childhood and adolescence. Once I dipped into one of them, I was hooked. Years of reading Hill’s stories without a doubt influenced my own desire to become a storyteller, and it’s with great fondness that I remember many of her titles.

If you’ve enjoyed the classic works of writers like Jane Austen and Georgette Heyer, it is way past time for you to discover the inspirational stories of Grace Livingston Hill!

—Anna Schmidt, award-winning author of the Women of Pinecraft series

Ah, Grace Livingstone Hill! Can any other writer compare? Her lyrical, majestic tone, her vivid descriptions … they melt the heart of readers from every generation. Some of my fondest memories from years gone by involve curling up in my mother’s chair and reading her Grace Livington Hill romances. They swept me away to places unknown and reminded me that writers—especially writers of faith—could truly impact their world.

—Janice Hanna Thompson, author of the Weddings by Bella series

Grace Livingston Hill’s stories are like taking a stroll through a garden in the spring: refreshing, fragrant, and delightful—a place you’ll never want to leave.

—MaryLu Tyndall, Christy nominee and author of the Surrender to Destiny series

Enduring stories of hope, triumph over adversity, and true sacrificial love await every time you pick up a Grace Livingston Hill romance. 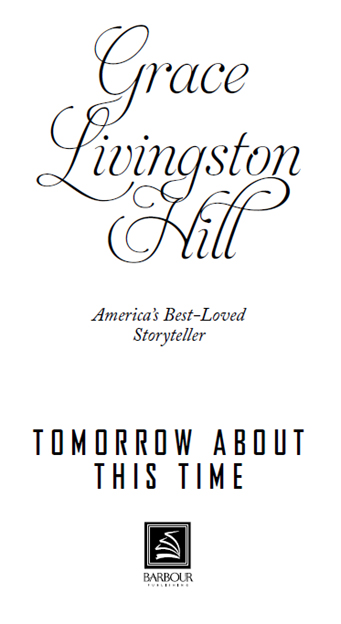 T
he letter lay on the top of the pile of mail on the old mahogany desk, a square envelope of thick parchment with high, dashing handwriting and faint, subtle fragrance.

The man saw it the instant he entered the room. It gave him a sick dull thrust like an unexpected blow in the pit of his stomach. He had come back to the home of his childhood after hard years to rest, and here was this!

It was from his former wife, Lilla, and no word from her in all the twelve years since their divorce had ever brought anything but disgust and annoyance.

He half turned toward the door with an impulse of retreat but thought better of it and stalked over to the desk, tearing open the envelope roughly as if to have the worst over quickly. It began abruptly, as Lilla would. He could see the white jeweled fingers flying across the page, the half-flippant fling of the pen. Somehow the very tilt of the letters as she had formed them contrived to give the taunting inflection of her voice as he read.

Well, Pat, the time is up, and as the court decreed I am sending you your daughter. I hope you haven’t forgotten, for it would be rather awkward for the poor thing. I’m going to be married in a few days now and wouldn’t know what to do with her. She’s fourteen and has your stubbornness, but she’s not so bad if you let her have her own way in everything. Don’t worry, she’s the kind that marries young, and she’ll probably take herself off your hands soon. I wish you well of your task
.

He sat back in the old mahogany chair and steadied his arms on the chair arms. The paper was shaking in his fingers. Something inside of him began to tremble. He had a feeling that it was his soul that was shaking. Like quicksilver along his veins the weakness ran, like quicksands his strength slid away from beneath his groping feet. He had not known that a man in his prime could be so puny, so helpless. Why, all the little particles of his flesh were quivering! His lips were trembling like an old person’s. He was like a frail ship being tossed in the trough of great waves. He could not right himself nor get any hold on his self-control. He could not seem to think what it all meant. He tried to read it over again and found the words dancing before his eyes with strange, grotesque amusement at his horror, like the look in Lilla’s eyes when she knew she had hit one hard in a sensitive spot. His daughter!

He had not seen her since she was two years old, and had taken very little notice of her then. His mind had been too much filled with horror and disappointment to notice the well-suppressed infant who spent her days in a nursery at the top of the house when she was not out in the park with her nurse. A memory of ribbons and frills, pink-and-whiteness, and a stolid stare from a pair of alien eyes that were all too much like Lilla’s to make any appeal to his fatherhood—that was his child, all he could recall of her. Even her name, he remembered bitterly, had been a matter of contention.
Athalie
, the name of a heathen queen! That had been her mother’s whim. She said it was euphonious. Athalie Greeves! And she had enjoyed his horror and distaste. And now this child with the heathen name was coming home to him!

He had looked on her as an infant still. He had not realized in the big, sharp experiences of the life he was living that the years were flying by. It could not be fourteen years! He had heard the judge’s decree that the child was to remain with her mother until she reached the age of fourteen years, and was then to pass to the guardianship of her father, but he had thought he would not be living when that came to pass. He had felt that his life was over. He had only to work hard enough and fill every moment with something absorbing, and he would wear out early. But here he was, a young man yet, with honors upon him, and new vistas opening up in his intellectual life in spite of the blighted years behind him; and here was this child of his folly, suddenly grown up and flung upon him, as if his mistakes would not let him go but were determined to drag him back and claim him for their own!

Dreams in the Key of Blue by John Philpin
Playing the Whore by Melissa Gira Grant
Tears for a Tinker by Jess Smith
Black Widow by Chris Brookmyre
The Child Prince (The Artifactor) by Raconteur, Honor
Quest for Honour by Sam Barone
Fin by David Monteagudo
Hope Girl by Wendy Dunham
Red (Black #2) by T.L Smith
Wolves in Winter by Lisa Hilton