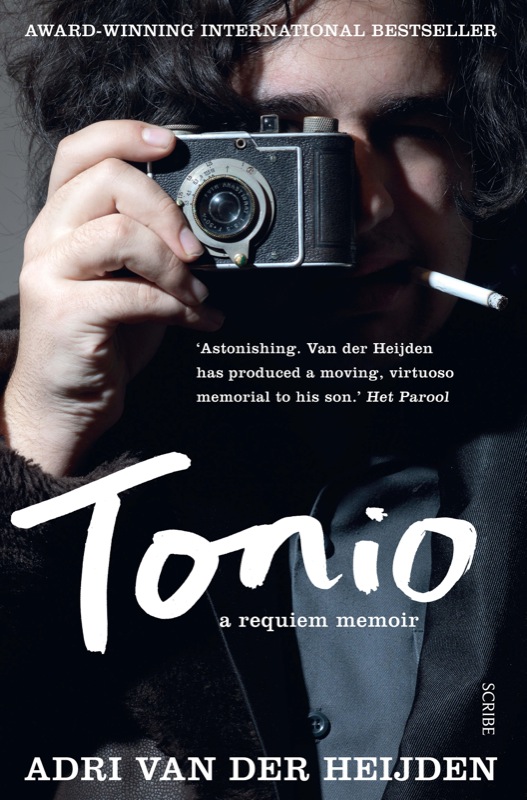 Adri van der Heijden (b. 1951) is one of Holland's greatest and most highly awarded authors. His oeuvre consists mainly of two sagas:
The Toothless Time
and
Homo Duplex
. He has also written four other requiems, one of which is about his father's death,
His Father's Ashes
.

Tonio
won three of Holland's most prestigious literary awards: the Constantijn Huygens Prize, the 2012 Libris Literature Prize, and the 2012 NS Reader's Award for the Best Book of the Year. It has been a major bestseller in Holland and in Germany, and this edition marks its first appearance in English. 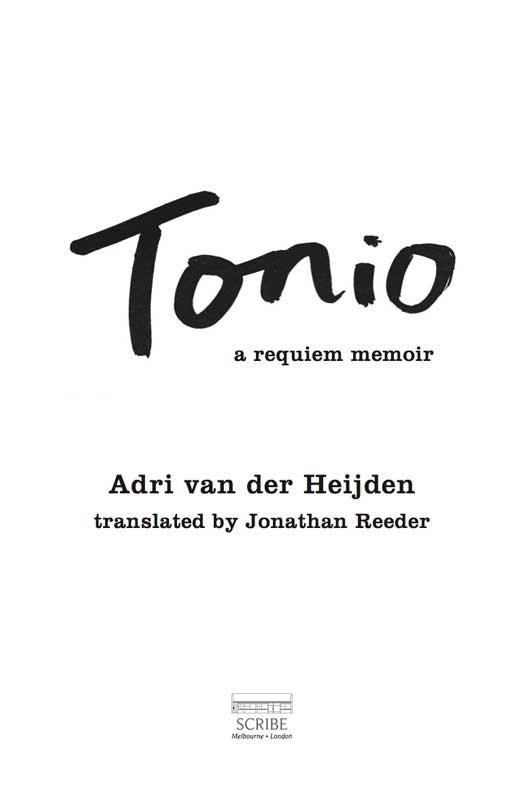 The moral rights of the author and translator have been asserted

Give sorrow words: the grief that does not speak

Whispers the o'erfraught heart, and bids it break.

Farewell, thou child of my right hand, and joy;

My sin was too much hope of thee, loved boy,

Seven years thou wert lent to me, and I thee pay,

Exacted by thy fate, on the just day.

O, could I lose all father, now. For why

Will man lament the state he should envy?

To have so soon 'scaped world's, and flesh's rage,

And, if no other misery, yet age!

For whose sake, henceforth, all his vows be such,

As what he loves may never like too much.

Chapter II
âSo who's the third?'

Chapter V
In love against

Never have I called out his name more often than in the scant four months since Black Whitsun. If I add âat the top of my voice', I am referring to my inner voice, which is infinitely louder and more far-reaching than anything my vocal cords, brought into vibration by a thrust of air, are capable of. There's no sign of it on the outside.

Compare it with crying. Sometimes I'm ashamed of myself in front of Miriam, who, unlike me, is able to surrender completely to the natural force of a sudden fit of sobbing.

âEven though you don't see the tears, Minchen, I
am
crying with you,' I once explained to her (with a choked voice, mind you). âFor me, this damn grief is like internal bleeding. It trickles away, or gushes, on the inside.'

At the beginning of Vladimir Nabokov's novel
Lolita
, the narrator savours the name of his lover, syllable by syllable: âthe tip of the tongue taking a trip of three steps down the palate to tap, at three, on the teeth. Lo. Lee. Ta.'

My son's name
begins
with a similar tap of the tongue behind the front teeth (âT â¦'), upon which the lips separate in order to render the vowel âo' in all its fullness. Via the sinuses, higher up, the remaining breath produces a slightly shrieking nasal sound (âniii â¦') â little more than a brief interruption of the drawn-out âooo', which then further resounds, unhindered, through the still-open mouth.

What a perfect thing to call him, we thought â literally, too, so that later, when he was playing outside, we could call him in to dinner. The swell of the second âo' could easily reach the end of the street, if need be all the way to the Jacob Obrechtplein, where one day the boy would hang around the synagogue with his chums.

When Miriam was pregnant it never occurred to us to establish the baby's sex via an ultrasound. Even without scientific confirmation, we were both convinced it would be a girl â I don't remember why. We wanted to name her EsmÃ©e, after the opera
EsmÃ©e
that Theo Loevendie was composing at the time. He regularly kept us up to date on its progress over at CafÃ© Welling.

A few weeks before her due date, Miriam came into the bathroom, where I was in the tub nursing a hangover. The door was ajar; she nudged it further open with her pointy belly, which jutted out even more from the way she planted both hands behind her back.

My head hurt too much to tackle that one. For months, the house had been littered with sheets of notes for a paper Miriam was writing for her Dutch literature work group: a comparative study of Thomas Mann's novella
Tonio KrÃ¶ger
and Alfred Kossmann's novel
Smell of Sadness
. I only had to see a page of her notes from a distance, and the name Tonio KrÃ¶ger caught my eye. Copies of
Tonio KrÃ¶ger
were strewn around the living room, even the kitchen â a variety of editions, in German and Dutch. Miriam read passages to me from her paper. I heard her discussing it on the phone with the docent, with her fellow students. And always the rounded euphony of that name: ââ¦ like it says in
Tonio KrÃ¶ger
â¦'

âA boy,' I repeated, extending Miriam a sudsy arm. âThen we'll have no choice but to name him Tonio.'

A light smack on my hand sent the soapsuds fluttering. âOkay.' Miriam wobbled out of the bathroom. Case closed, apparently. EsmÃ©e still had top billing, but now we had a boy's name on hand, in the unlikely event
that
.

A few days after the bathroom scene, our son was born, a good three weeks prematurely. Standing at the incubator, I whispered his name, reading it from the pale-pink bandage stuck to his tiny chest. It was starting to grow on me.

It had the ring of a rolling, breaking, rumbling wave to it.
Ni
. A case of declawed negation.

All right, it was a gamble, but the name âTonio' turned out to fit him like a glove. Once the little blindman's eyes opened wide, they looked at you with the same roundness and directness as the boldface o's on the birth announcement.

My nickname for him â TotÃ² â came up more or less by itself. It got a droolier laugh out of him than at his real name, so I guessed he wouldn't murder me for it later. When the mafia don TotÃ² Riina was arrested in Sicily a few years later, a visitor who overheard me call my little one by his nickname said: âThat's pretty bold, naming your kid after a mafioso.'

âBefore yesterday I'd never heard of this Riina guy. I was always reminded of Antonio de' Curtis. The Neapolitan comedian. Stage name: TotÃ². He was in Pasolini's
Uccellacci e uccellini
. Hell of a clown.'

Years later, whenever Tonio pulled one of his pranks, I called him TotÃ² les HÃ©ros, after the movie by Jaco Van Dormael. Then he laughed even harder, but a bit nervously once I'd explained I was calling him a âhero', and he knew you could take that in all sorts of ways.

Miriam's nickname for him at first was, I thought, more Vondel-like: Tonijntje, âlittle tuna'. When she spoke it she put so much love in her voice that he knew he had nothing to fear â and, self-satisfied, he was happy to show it.

âOkay, five more minutes, Tonijn, but you have to come sit here with me.'

âAbout Runner, heh â¦' (Runner was his Russian dwarf hamster, found dead in his wood shavings months before. Off and on, when it suited him, Tonio would grieve for him. He and his guitar teacher had composed a brief requiem for Runner.)

With all my angst on the subject of his vulnerability, it never occurred to me that the lively pair of o's that smiled at me so eagerly via the name Tonio were typographically identical to those that glowered out from the rigid congruence of the word âdood' â
death
.

The last time Miriam and I saw him, two surgical drains stuck out of his forehead, a short one and a slightly longer one, like horns. They had been inserted earlier that day to siphon off excess fluid from his swelling brain. Even with everything going through my mind at that moment, my own brain still had room for a scene from the movie
Camille Claudel
, which Miriam and I had seen many years earlier. I wanted to remind her of it, but no, not there, not then.

The sculptor Rodin examines a small statue of a rhinoceros. âHe's called TotÃ², says one of Claudel's sisters. âIf you look straight at him, you've got his name.'

Two different horns, two identical eyes. Although one of the eyelids was starting to creep upwards, you could safely say Tonio kept his eyes closed, so that the image only partly hit the mark.

âAntonio' was taboo, but otherwise he liked his name, with all its nicknames, pet names, and bynames. But when he was required â for registration at school or elsewhere â to supply his other given names, he came home outraged. The irate Tonio crossed his arms over his chest in a sort of incomplete interlock, the wrist joints sticking upwards like angry lumps.

Trouble Shooter (1974) by L'amour, Louis - Hopalong 04
Spark by Jessica Coulter Smith, Smith
Fall For You [The Jane Austen Academy Series #1] by Cecelia Gray
Rescued Hearts (Hero Series) by Austin, Gina
Secrets of the Stonechaser (The Law of Eight Book 1) by Nicholas Andrews
Liberty and Tyranny by Levin, Mark R.
Treacherous Toys by Joyce and Jim Lavene
The Hunt for the Missing Spy by Penny Warner
March: A Tale of Salmon and Swedes (The Glothic Tales Book 4) by Haines, Derek
The Dark Tower Companion: A Guide to Stephen King’s Epic Fantasy by Bev Vincent