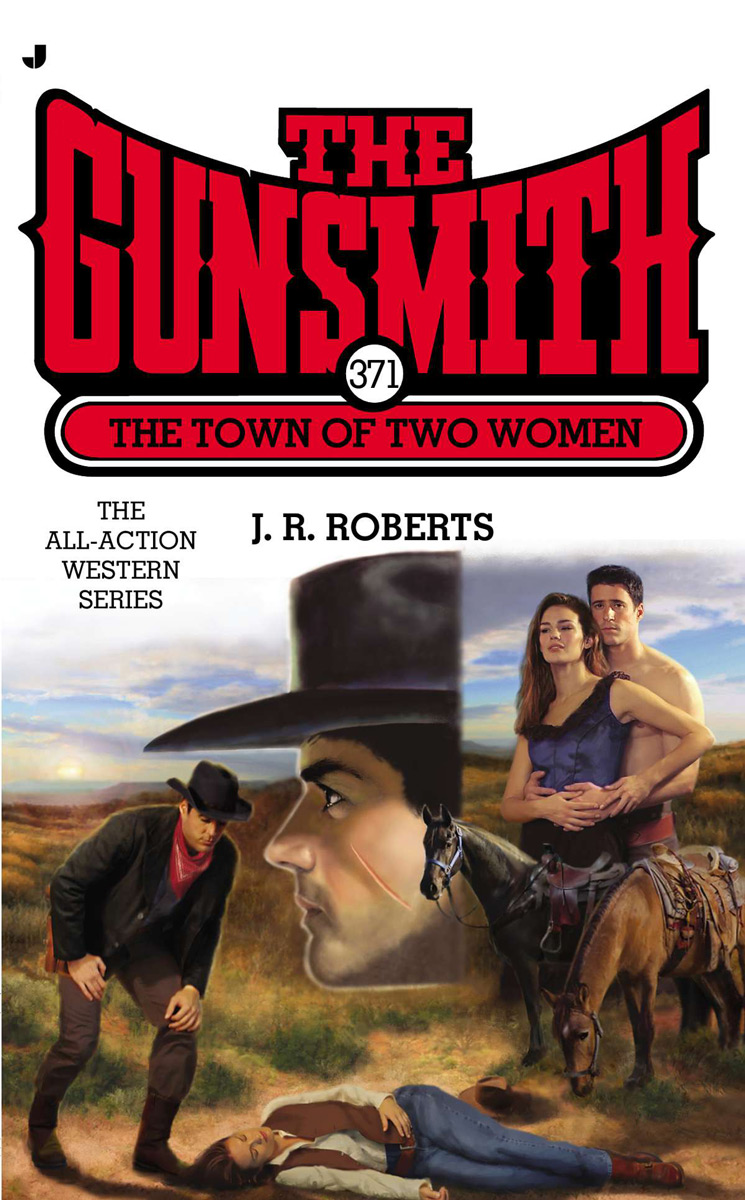 Wrong Arm of the Law

“I'll tell you what I told your husband, ma'am,” Clint said. “Anyone you send will have to deal with me.”

“I will not send someone,” Mrs. Locksley said. “I will send several someones. I am aware of your reputation, but you are only one man.”

“As I told your husband, I'm one man who will be fixated on you, and on him.”

“You don't frighten me, Mr. Adams,” she said. “Perhaps you frightened my husband. I rather think you probably did. But you don't scare me. You would not shoot an unarmed woman.”

“I'll gladly shoot anyone you send after me, though,” he told her.

“Then you'll have to deal with the law.”

“You think if you send gunmen to try to kill me, the law will be on your side?”

THE GUNSMITH by J. R. Roberts

Clint Adams was a legend among lawmen, outlaws, and ladies. They called himÂ .Â .Â . the Gunsmith.

BUSHWHACKERS by B. J. Lanagan

An action-packed series by the creators of Longarm! The rousing adventures of the most brutal gang of cutthroats ever assembledâQuantrill's Raiders.

Dex Yancey is Diamondback, a Southern gentleman turned con man when his brother cheats him out of the family fortune. Ladies love him. Gamblers hate him. But nobody pulls one over on DexÂ .Â .Â .

The blazing adventures of mountain man Will Barlowâfrom the creators of Longarm!

J.T. Law: the most relentlessâand dangerousâmanhunter in all Texas. Where sheriffs and posses fail, he's the best man to bring in the most vicious outlawsâfor a price. 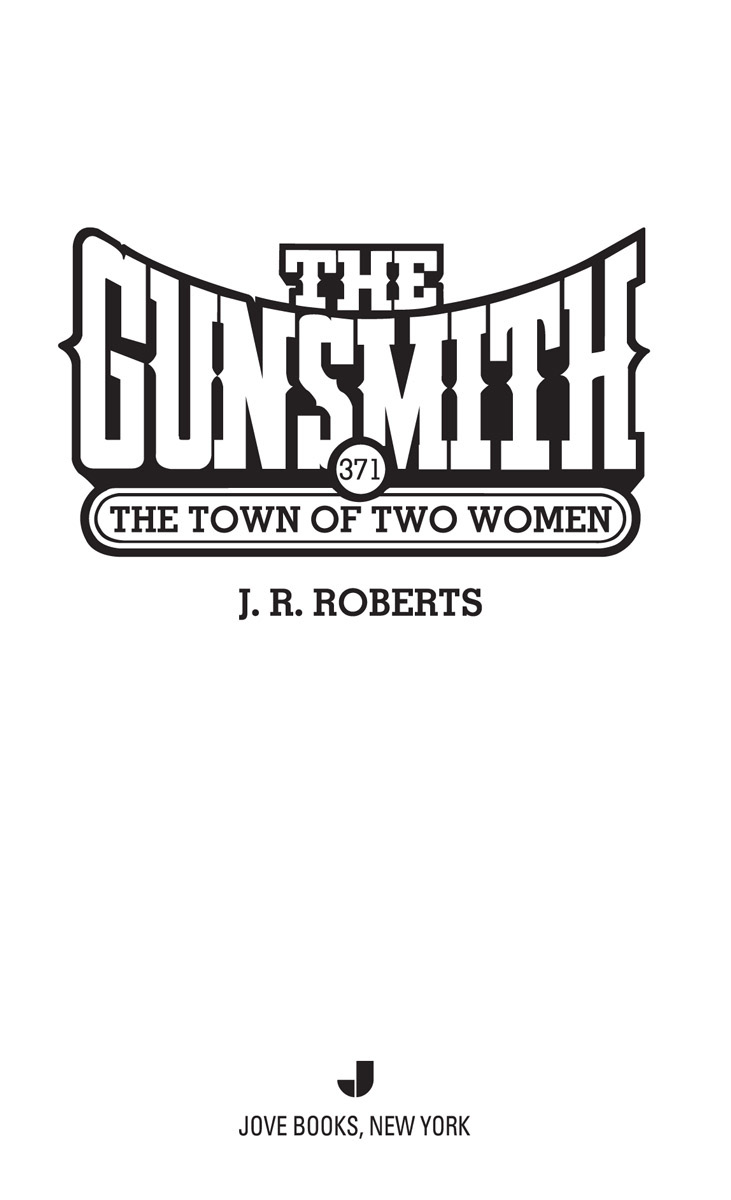 THE TOWN OF TWO WOMEN

No part of this book may be reproduced, scanned, or distributed in any printed or electronic form without permission. Please do not participate in or encourage piracy of copyrighted materials in violation of the author's rights. Purchase only authorized editions.

Jove Books are published by The Berkley Publishing Group,

The “J” design is a trademark of Penguin Group (USA) Inc.

Clint Adams was riding through New Mexico, feeling remarkably relaxed in his saddle, when he saw the horse. No rider, just a horse with an empty saddle.

A riderless horse was never good. It usually meant somebody was hurt somewhere.

“Okay, big boy,” he said to Eclipse, stroking the big Darley Arabian's neck, “first we catch the horse and see what it tells us about the rider. Come on!”

He kicked Eclipse in the ribs and off they went, after the free running horse.

The animal was loping rather than galloping. It wasn't running in panic, or to or from anything; it was just running becauseÂ .Â .Â . well, it was a horse. That was what they did.

Clint and Eclipse were closing the gap on the horse very quickly. The animal heard them coming and increased its speed, but it was no match for Eclipse. In a few minutes, they were alongside it. Clint reached over and grabbed the horse's reins and pulled it to a stop.

He dismounted and patted the horse's neck, gentling it. It was a mare, about eight years old, a little heavy for running around free. This was not a horse anyone would choose to make a long trip with. Maybe somebody was just out having a pleasure ride.

“Okay, what have you got?” he said. He checked the saddlebags, came up empty. The saddle itself had seen better days. When he looked underneath, he saw why the rider had fallen off. The cinch had broken, the saddle had slipped, and the rider had gone flying. The saddle had righted itself while the animal was running, which was why he hadn't noticed it in the first place.

Looking back the way they had come, he said, “Let's see if we can figure out where you came from.”

Clint had been riding north. The horse had come from the east. Maybe the next town.

He held on to the mare's reins and mounted Eclipse again. “Let's go and see what we can find.”

He rode east, trailing the mare behind him. He hoped he'd come upon the rider somewhere along the way, and find himâor herâalive.

It took twenty minutes, but eventually he spotted what he was looking for. In the distance, a body was lying on the ground, facedown. He gigged Eclipse into a canter. When he reached the body, he dismounted, tied the mare's reins to the pommel of his saddle.

He walked to the body, got down on one knee, and turned the body over. It was a woman, and she was alive.

He slapped her lightly on the face, but that didn't wake her. He felt her chest. She was breathing. He looked for wounds, didn't find anything until he looked under her long brown hair. He found a lump that felt soft, pulpy. There were also some bruises on her face that didn't look like they'd come from the fall.

She was wearing men's clothes, a shirt that was too big, a pair of jeans, tied around the waist with a rope. A worn pair of boots. He checked her pockets, but came up empty.

“Damn it.” He stood up. “What's east of here? Albuquerque, sure, but there's got to be something before that.” He looked at Eclipse, who just stared back at him.

Now he had to figure out how to take her in. Sling her over the saddle and tie her, or try to tie her sitting up?

He lifted her, found her remarkably light. The mare would be able to carry her, but the saddle would slip again. He was going to have to figure out a way to tie her to the horse without the saddle. He set her back down again, went to his saddle for his rope.

Ten minutes later he tightened the last knot, then stepped back to take a look. She was lying facedown across the horse, her arms hanging down. The rope was crisscrossed over her and under the horse. He was fairly sure she wouldn't slip off while they rode, but then he had no idea how far they'd have to go.

He had discarded the damaged saddle, saddlebags and all, since they were empty. There was nothing else on the saddle, no rope, no rifle. She was also unarmed, and there were no weapons on the ground around her. The horse was still wearing its bridle.

He grabbed the reins, then mounted Eclipse.

The next town he came to was called Heathstead. He didn't know what it meant, but he knew that it didn't matter. The girl needed a doctor, and Heathstead looked big enough to have one. Not a big town by any means, but there was a general store, a saloon, a hotel, a sheriff's office, and a schoolhouse. He thought it followed that the town would have a doctor.

He attracted a lot of attention riding in with a body slung over a horse. He wondered what the people would think if they knew it was a woman.

He reined his horse in and called out to a passing man.

“Is there a doctor in town?”

“Yeah, just down the street, down the alley from the cafÃ©.”

He found the cafÃ©, found the alley, and dismounted. Instead of carrying the girl up the flight of stairs, he preferred to find out first if the doctor was in. He went up the stairs and knocked. Next to the door was a shingle that said:
DOCTOR R. MATHIS
. He wondered why the shingle wasn't at the bottom of the steps.

The door opened and a tall, slender man with gray hair and a neatly trimmed mustache regarded him for a moment before asking, “Help you?”

The doctor took one step out to look down the stairs, saw the horse with the body on it.

“For me or the undertaker?”

“Bring him up, then,” Mathis said. “You're lucky. I was about to go out on some house calls.”

Clint went down the steps, untied the body from the horse, and carried her up.

“In here,” the doctor called from another room.

Clint carried her in.

Clint did, as gently as he could. The doctor had his back turned, didn't see that it was a woman until he turned around, wiping his hands on a towel.

He stopped short, then stared at Clint.

“Found her on the trail,” Clint said. “Her horse had thrown her. She hit her head, but it looks like she had a run-in with somebody before that.”

“Why did you bring her here?” the doctor demanded.

“This was the first town I came to,” Clint explained. “And she needs a doctor.”

“Goddamnit,” Mathis said, “go and close the door. And put the horses further in the alley so they can't be seen from the street.”

“Well, all right,” Clint said, “but I'd like an explanation when I come back.”

Clint went out, closed the door, descended to the horses, and walked them into the alley. When he returned, the doctor was bent over the patient.

“This is crazy,” the man said. “I shouldn't even be doing this.”

“Why not? You're a doctor, right? And she's injured. What's the big deal?”

The doctor looked over his shoulder at Clint, then went back to his patient.

“I need some answers.”

“And stay inside!” the doctor hissed as Clint passed into the front room.

Clint went to the window to look out. There was nobody at the bottom of the stairs. The only thing he could figure was that the town didn't like strangers. What other reason could the doctor have for being so upset?

He looked around, saw half a bottle of whiskey on a table with a couple of glasses. He poured a couple of fingers, then downed them to cut the dust. He put the glass back, picked out a chair, and sat down to wait.

Among the people who had seen Clint ride in with the body was a man named Harley Trace. Trace watched as Clint rode to the doctor's office, then watched as Clint carried the girl up the stairs.

Trace went from there directly to the sheriff's office, barged in without knocking.

“Damn it, Harley,” Sheriff Pete Crabtree said. “What the hellâ”

“What are you talkin' about?” Crabtree asked. “Why the hell would she come back?”

“A fella just rode in with her tied to a horse. She looks hurt or dead. Probably hurt, 'cause he took her to the doc's.”

“Doc knows better than that.”

“Are you sure about this?”

“Okay,” Crabtree said. “Go back and keep watch. I've got to go and talk to Mr. Locksley.”

“Ya want me to get anybody else?”

“Harley, listen up,” Crabtree said. “Go back and watch. That's it.”

Trace left and went back to take up a position across the street from the doctor's office.

Crabtree was forty years old, had been the sheriff of Heathstead for eighteen months. In all that time the only distasteful thing he had done was run that girl out of town. But he hadn't had a choice. Other than that, he'd been able to do his job with hardly any interference.

He strapped on his gun and headed the Eric Locksley's office.