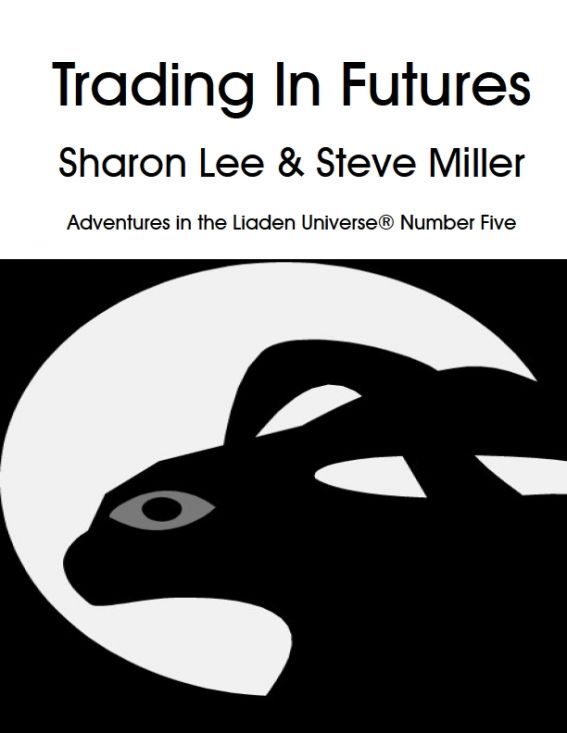 Adventures in the Liaden
Universe
®

Copyright
©
2001, 2003, 2011
by
Sharon Lee
and
Steve Miller
. All rights reserved. No part of this publication may be
reproduced or transmitted in any form or by any means, electronic
or mechanical, without permission in writing from the author.
Please remember that distributing an author's work without
permission or payment is theft; and that the authors whose works
sell best are those most likely to let us publish more of their
works.

First published in 2001 by SRM,
Publisher.

A Choice of Weapons first appeared in
Absolute Magnitude #12, 1999

This ebook is licensed for your personal
enjoyment only. This ebook may not be re-sold or given away to
other people. If you would like to share this book with another
person, please purchase an additional copy fo reach recipient. If
you're reading this book and did not purchase it, or it was not
purchased for your use only, the please return to Smashwords.com
and purchase your own copy. Thank you for respecting the hard word
of this author

"IF YOU TRADE WITH Liadens, trade careful,
and for the gods' love don't come sideways of honor."

This set of notes was old: recorded by
Great-Grand-Captain Larance Gobelyn more than forty Standard years
ago, dubbed to ship's library twenty Standards later from the
original deteriorating tape. Jethri fiddled with the feed on the
audio board, but only succeeded in lowering the old man's voice.
Sighing, he upped the gain again, squinting in protest of the
scratchy, uneven sound.

"Liaden honor is--active. Insult--any
insult--is punished. Immediately. An individual's name is his most
important possession and he will kill to preserve its integrity.
Think twice before trading with--"

"Yessir," he said, turning his head toward
the intercom grid set in the wall.

"Come on down to the trade room, will you?
We need to talk over a couple things."

Jethri slipped the remote
out of his ear. His uncle was Senior Trader on
Gobelyn's Market
and Jethri was
Senior Apprentice. Actually, he was the only apprentice trader, his
sibs and cousins being well above him in years and rank, but the
ladder was immutable.

"Yessir," he said again. Two quick
fingertaps marked his place in the old notes file. He left the
common room at a brisk walk, his thoughts half on honor.

HIS UNCLE NODDED him into a chair and eased
back in his. They were coming in on Ynsolt'i and next hour Paitor
Gobelyn would have time for nothing but the feed from the port
trade center. Now, his screen was dark, the desk-top barren. Paitor
cleared his throat.

"Got a couple things," he said, folding his
hands over his belt buckle. "On-Port roster: Dyk an' me'll be
escorting the payload to central hall and seeing it safe with the
highest bidder. Khat's data, Grig's eatables, Mel's on tech,
Cris'll stay ship-side. You..."

Paitor paused and Jethri gripped his hands
together tight on his lap, willing his face into a trader's
expression of courteous disinterest. They had textile on
board--half-a-dozen bolts of cellosilk that Cris had taken on two
stops back, with Ynsolt'i very much in his mind. Was it possible,
Jethri wondered, that Uncle Paitor was going to allow...

"Yourself--you'll be handling the silk lot.
I expect to see a cantra out of the six. If I was you, I'd call on
Honored Sir din'Flora first."

Jethri remembered to breathe. "Yes, sir.
Thank you." He gripped his hands together so hard they hurt. His
own trade. His own, very first, solo trade with no Senior standing
by, ready to take over if the thing looked like going awry...

His uncle waved a hand. "Time you were
selling small stuff on your own. Now." He leaned forward abruptly,
folded his arms on the desk and looked at Jethri seriously. "You
know we got a lot riding on this trip."

Indeed they
did--three-quarters of the
Market's
capital was tied up in eight Terran pounds
of
vya
--a spice
most commonly sold in five gram lots. Jethri's research had
discovered that
vya
was the active ingredient in
fa'vya
, a Liaden drink ship's library
classified as a potent aphrodisiac. Ynsolt'i was a Liaden port and
the spice should bring a substantial profit to the ship. Not,
Jethri reminded himself, that profit was ever
guaranteed.

"We do well with the spice
here," Paitor was saying, "and the Captain's going to take us
across to Kinaveral, do that refit we'd been banking for
now
, rather than two
Standards from now."

This was news. Jethri sat up straighter,
rubbing the palms of his hands down the rough fabric of his work
pants.

"Refit'll keep us world-bound 'bout a
Standard, near's we can figure. Captain wants that engine upgrade
bad and trade-side's gonna need two more cargo pods to balance the
debt." He grinned suddenly. "Three, if I can get 'em."

Jethri smiled politely, thinking that his
uncle didn't look as pleased with that as he might have and
wondering what the down-side of the trade was.

"While refit's doing, we
figured--the Captain and me--that it'd be optimum to re-structure
crew. So, we've signed you as Senior 'prentice with
Gold Digger
."

It was said so smoothly that Jethri didn't
quite get the sense of it.

"
Gold Digger
?" he repeated blankly,
that much having gotten through, by reason of him and Mac Gold
having traded blows on last sighting--more to Jethri's discomfort
than Mac's. He came forward in his chair, hearing the rest of it
play back inside the whorlings of his ears.

"You've signed me
onto
Gold Digger
?"
he demanded. "For how long?"

Paitor raised a hand. "Ease
down, boy. One loop through the mines. Time they're back in port,
you'll be twenty--full adult and able to find your own berth." He
nodded. "You make yourself useful like you and me both know you can
and you'll come off
Digger
a full trader with experience under your
belt--"

"Three
Standards
?" Jethri's voice broke, but
for once he didn't cringe in shame. He was too busy thinking about
a converted ore ship smaller than the
Market
, its purely male crew crammed
all six into a common sleeping room, and the trade nothing more
than foodstuffs and ore, ore and mining tools, oxy tanks and
ore...

"Ore," he said, staring at
his uncle. "Not even rough gem.
Industrial
ore
." He took a breath, knowing his dismay
showed and not caring about that, either. "Uncle Paitor, I've been
studying. If there's something else I--"

Paitor showed him palm again. "Nothing to do
with your studying. You been doing real good. I'll tell you--better
than the Captain supposed you would. Little more interested in the
Liaden side of things than I thought reasonable, there at first. No
harm in learning how to read the lingo, though, and I will say the
Liadens seem to take positive note of you." He shook his head.
"Course, you don't have your full growth yet, which puts you nearer
their level."

Liadens were a short, slight people,
measured against Terran averages. Jethri wasn't as short as a
Liaden, but he was, he thought bitterly, a damn sight shorter than
Mac Gold.

"What it is," Paitor said slowly. "We're out
of room. It's hard for us, too, Jethri. If we were a bigger ship,
we'd keep you on. But you're youngest, none of the others're
inclined to change berth, and, well--Ship's Option. Captain's
cleared it. Ben Gold states himself willing to have you." He leaned
back, looking stern. "And ore needs study, too, 'prentice.
Nothing's as simple as it looks."

Thrown
off
, thought Jethri.
I'm being thrown off of my ship
! He
thought that he could have borne it better, if he was simply being
cast out to make his own way. But the arranged berth on
Gold Digger
added an edge
of fury to his disbelief. He opened his mouth to protest further
and was forestalled by a
ping
! from Paitor's
terminal.

The Senior Trader snapped forward in his
chair, flipping the switch that accepted the first of the trade
feeds from Ynsolt'i Port. He glanced over at Jethri.

"You get me a cantra for that silk,
now."

That was dismissal. Jethri stood. "Yessir,"
he said, calm as a dry mouth would let him, and left the trade
room.

"PREMIUM GRADE, honored sir," Jethri
murmured, keeping his eyes modestly lowered, as befit a young
person in discourse with a person of lineage and honor.

Honored Sir din'Flora moved his shoulders
and flipped an edge of the fabric up, frowning at the underweave.
Jethri ground his teeth against an impulse to add more in praise of
the hand-loomed Gindoree cellosilk.

Don't
oversell
! he could hear Uncle Paitor snap
from memory.

The trader is in control of the trade.

"Half-a-cantra the six-bolt," the buyer
stated, tossing the sample cloth back across the spindle. Jethri
sighed gently and spread his hands.

"The honored buyer is, of course,
distrustful of goods offered by one so many years his inferior in
wisdom. I assure you that I am instructed by an elder of my ship,
who bade me accept not a breath less than two cantra."

"Two?" The Liaden's shoulders moved
again--not a shrug, but expressive of some emotion. Amusement,
Jethri thought. Or anger.

"Your elder mis-instructs
you, young sir. Perhaps it is a testing." The buyer tipped his head
slightly to one side, as if considering. "I will offer an
additional quarter-cantra," he said at last, accent rounding the
edges of the trade-tongue, "in kindness of a student's
diligence."
Wrong
,
Jethri thought. Liadens did nothing for kindness, which he knew
from the tapes and from crew-talk. Liadens lived for revenge, and
the stories Khat told on the subject kept a body awake on
sleep-shift, praying against the mistake that would earn him
nitrogen in his back-up oxy tank in payment of a Liaden's
"balance".

Respectful, Jethri bowed, and, respectful,
brought his eyes to the buyer's face. "Sir, I value your kindness.
However, the distance between three-quarter cantra and two is so
vast that I feel certain my elder would counsel me to forgo the
trade. Perhaps you had not noticed--" he caught himself on the edge
of insult and smoothly changed course--"the light is poor, just
here..."

Pulling the bolt forward, he again showed
the fineness of the cloth, the precious irregularities of weave,
which proved it hand woven, spoke rapturously of the pure crimson
dye.