BOOK: Troubling a Star
12Mb size Format: txt, pdf, ePub
Read Book Download Book
ads
“I know,” Otto said. “But I killed him.”
Siri switched to major chords. Without introduction she sang:
If it has feathers I give you my word
It won't be a dolphin, it won't be a whale.
It may be an angel, it may be a bird;
Whatever it is, it can tell us a tale.
Â
It may be a penguin, it won't be a seal,
It may point to a place where a song is dwelling.
If it's an angel I'm sure it's real
And will give us a story worth the telling.
Â
It gives us no answers, it promises naught,
Except that we all have a say in the words.
If it has feathers, we've all been taught,
It may be the most unexpected of birds!
When she was through, the mood had switched for most of the passengers. Only a few of us knew what had happened on the ice floe, or indeed that there had been anybody on an ice floe. Siri's melody was as light as my words. There was lots of clapping and cheering. The assembled group was unusually full of laughter and warm feeling.
Angelique said in a low voice, “Bless you, Vicky. Siri, too.”
Leilia, sitting at the table next to ours, smiled at me warmly. “Good work.”
Cook touched my hand gently. “Vicky is not a penguin. She understands how to be vulnerable, and how to be a friend.”
“Encore! Encore!” Several people were shouting.
Adam twined his fingers through mine.
“Siri, play it again!” Sam called.
Siri picked up her harp. I was glad we'd had the lament first, because I knew that something light was needed now. Benjy and Siri sat together. Then Adam put his arm around me and I leaned back and listened. 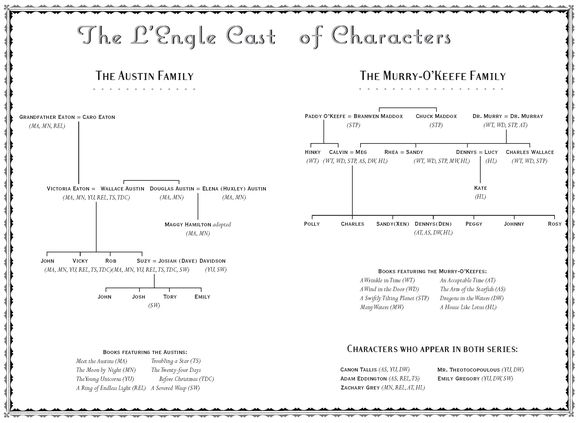 GOFISH
QUESTIONS FOR THE AUTHOR

MADELEINE L'ENGLE
Â
What did you want to be when you grew up?
A writer.
Â
When did you realize you wanted to be a writer?
Right away. As soon as I was able to articulate, I knew I wanted to be a writer. And I read. I adored Emily of New Moon and some of the other L.M. Montgomery books and they impelled me because I loved them.
Â
When did you start to write?
When I was five, I wrote a story about a little “gurl.”
Â
What was the first writing you had published?
When I was a child, a poem in CHILD LIFE. It was all about a lonely house and was very sentimental.
Â
Where do you write your books?
Anywhere. I write in longhand first, and then type it. My first typewriter was my father's preâWorld War I machine. It was the one he took with him to the war. It had certainly been around the world.
Â
What is the best advice you have ever received about writing?
To just write.
Â
What's your first childhood memory?
One early memory I have is going down to Florida for a couple of weeks in the summertime to visit my grandmother. The house was in the middle of a swamp, surrounded by alligators. I don't like alligators, but there they were, and I was afraid of them.
Â
What is your favorite childhood memory?
Being in my room.
Â
As a young person, whom did you look up to most?
My mother. She was a storyteller and I loved her stories. And she loved music and records. We played duets together on the piano.
Â
What was your worst subject in school?
Math and Latin. I didn't like the Latin teacher.
Â
What was your best subject in school?
English.
Â
What activities did you participate in at school?
I was president of the student government in boarding school and editor of a literary magazine, and also belonged to the drama club.
Â
Are you a morning person or a night owl?
Night owl.
Â
What was your first job?
Working for the actress Eva Le Gallienne, right after college.
Â
What is your idea of the best meal ever?
Cream of Wheat. I eat it with a spoon. I love it with butter and brown sugar.
Â
Which do you like better: cats or dogs?
I like them both. I once had a wonderful dog named Touche. She was a silver medium-sized poodle, and quite beautiful. I wasn't allowed to take her on the subway, and I couldn't afford to get a taxi, so I put her around my neck, like a stole. And she pretended she was a stole. She was an actor.
Â
What do you value most in your friends?
Love.
Â
What is your favorite song?
“Drink to Me Only with Thine Eyes.”
Â
What time of the year do you like best?
I suppose autumn. I love the changing of the leaves.
I love the autumn goldenrod, the Queen Anne's lace.
Â
Which of your characters is most like you?
None of them. They're all wiser than I am.
TROUBLING A STAR. Copyright Â© 1994 by Crosswicks, Ltd.
All rights reserved. For information,
address Square Fish, 175 Fifth Avenue, New York, N.Y. 10010.
Â
Â