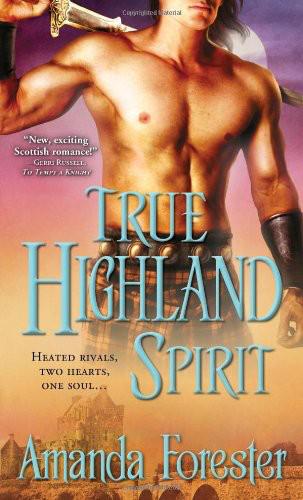 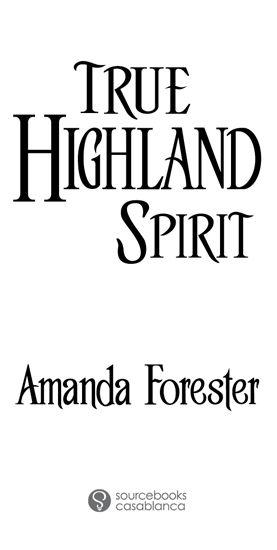 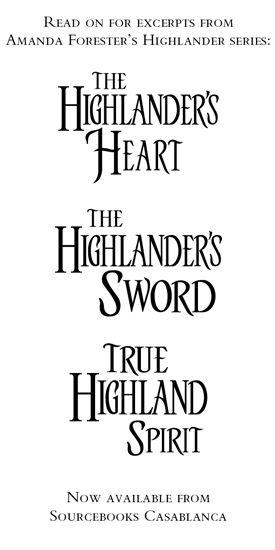 An excerpt from
The Highlander’s Sword

An excerpt from
The Highlander’s Heart

To Squid-Man and Captain Kitty Pants, who give me such joy. And to Ed, my true hero.

Morrigan McNab silently drew her short sword, careful to remain hidden from the road. She checked to ensure her black head-scarf was in place, concealing her nose and mouth. The target of today’s villainy clopped toward them through the thick mud. Twelve men were in the mounted party, their rich robes identifying them as wealthy, above the common concerns of daily sustenance… in other words, perfect marks.

Concealed by the tree and thick foliage, Morrigan scanned the approaching party for weapons. It appeared to be a hunting party, since all had bows slung across their backs and long knives at their sides. The dead boar they carried strung between two riders was also a clear sign of a hunt. Despite their alarming arsenal, most looked complacent, paying more attention to the flask they were passing around as they laughed and joked among themselves. One man, the one carrying a metal-tipped pike, scanned the woods around him as if he sensed danger.

Morrigan glanced at her brother Archie, only his eyes visible over the mask he wore. He pointed to her, then to the man with the pike. Morrigan narrowed her eyes at her brother. He always gave her the hard ones. Morrigan gave a curt nod and turned her focus back to the pikeman. He looked fit and vigilant. She preferred fat and careless. The war horse was a fine specimen too, tall and strong, trained to stand his ground in battle. It would not be easy to take him down.

The hunting party clomped closer, and a man walking behind the riders came into view. Morrigan wondered why he was left to slog through the mud behind the hunting party. Many of the horses would carry two men with ease. The walking man was dressed in a worn traveling cloak and a brightly colored tunic with a lyre strapped to his back. He must be a minstrel. Those wealthy hunters probably considered him unworthy of a ride. Damn rich bastards.

Archie gave a bird call, the signal. Morrigan tensed in anticipation, coiled, ready to strike, and counted. The men jumped at twenty; she always leaped at nineteen.

Morrigan sprung onto the road and charged the man with the pike, screeching like some fey creature from hell. Archie and the men surged into the fray, the men’s shouts blending with the surprised cries of the beset hunting party. The pikeman lowered his weapon toward her with a snarl, but Morrigan dropped to the ground and rolled under the nicely trained war horse, which was obliging enough not to move.

Regaining her feet on the other side of the horse, she pounded the hilt of her sword into the man’s elbow that held the pike, which now was pointed the wrong direction. The man howled in pain, his black teeth showing, and swung to hit her. She anticipated the move, ducked out of the way, grabbed the pike, and flipped it out of his hand. She had her sword tip stuck under the edge of his hauberk before the pike sunk into the mud. She applied just enough pressure to give him pause.

Her fellow bandits had likewise subdued the rest of the party. It was quiet for a moment, an odd silence after the explosion of sounds a moment before, that terrified both man and beast into mute submission.

“Good afternoon, my fellow travelers.” Archie McNab stood before the hunting party, a scarf covering his nose and mouth. He gave a practiced bow with an added flourish. Morrigan rolled her eyes. Her brother liked to think of himself as a gentleman thief. True, he was laird of his clan, but Morrigan had little tolerance for petty niceties. They were there to rob them. What was the point of being genteel about it?

“I see ye are burdened wi’ the evils o’ worldly possessions. But ne’er fear, my brethren, we have come to relieve ye o’ yer burdens.”

Morrigan held out her free hand, hoping the man would readily hand over his pouch of coins like the other wide-eyed members of his party. He did not comply and instead nudged his horse, causing it to step sideways.

“Grab the reins,” Morrigan commanded a young accomplice. The lad took up the reins of the war horse and held the animal’s head while Morrigan kept her eyes and her sword on the black-toothed man. He snarled at the lad, who balked and stepped back.

“Hold its head!” Morrigan snapped. The last thing she needed was this man making trouble.

“Now if ye fine gentlemen will make a small donation to the fund for wayward highwaymen, we shall set ye on yer way in a trifle,” said Archie.

On foot
, Morrigan mentally added. The warhorse Black Tooth sat upon was a fine specimen. She reckoned she would look better than he astride such a fine animal. The rest of the hunting party readily handed over their money pouches and weapons, but not Black Tooth. He glared a silent challenge. Morrigan sighed. For once, just for the novelty of it all, she’d like things to be easy. It was not to be on that day. Nor any day, truth be told.

Morrigan stabbed her mark harder, but other than a scowl, he made no move to comply. She could kill the man, but Archie was firm in his orders not to kill unless necessary, and Morrigan had to acknowledge the wisdom of it. Robbing folks was one thing, murder was another. The last thing they needed was a band of Highlanders come to rid the forest of murderous thieves.

The man still refused to hand over his money bag, so Morrigan grabbed the pommel of his saddle with her free hand and put her foot on his in the stirrup and hoisted herself up. It should have been a quick move. She grabbed his purse and pulled it free. Suddenly, he shouted and kicked the horse. The lad dropped the reins and the horse lunged forward, throwing Morrigan off balance. One punch from Black Tooth, and Morrigan fell back into the mud.

The black-toothed terror charged the horse in front of him, causing the mount to spook and rear. The result was chaos, as the remaining horses broke free, urged on by the hunting party who sensed a chance to break free.

“Grab the horses, ye fools!” Morrigan jumped up shouting. “They be unarmed, get them ye bastards!”

But more than one thief, having secured the desired reward, melted back into the shrubbery rather than face the angry hunters. The hunting party broke free and galloped away down the path they had come.

“We got the coin,” grumbled one man in response.

“But not the horses, ye fool! Now they can ride for their friends and come back for us. And ye,” Morrigan turned on the spindly legged lad who had dropped the leads of the warhorse she coveted. “Ye ought to be more afeared o’ me than any bastard on a horse.” Morrigan strode toward the boy with the intent of teaching a lesson that would be long remembered, but her brother caught her arm.

“I was younger than that when I joined this game,” Morrigan shot back.

“Aye,” Archie leaned to whisper in her ear. “But we all canna be heartless bitches like ye.” With teasing eyes he straightened and said in a louder voice. “Besides, we have a guest.”

Standing in the middle of the muddy road was the colorfully dressed man with a lyre slung on his back. Damn hunters had left him with a bunch of thieves. Morrigan cursed them once again along with their offspring and their poor mothers for general completeness. She was nothing if not thorough.

Despite being surrounded by thieves, the man appeared surprisingly calm, though perhaps after their pathetic display of incompetence he rightly felt he had nothing to fear.

“Allow me to introduce myself,” the stranger said with a seductive French accent and an equally appealing smile. “I am Jacques, poor traveling minstrel. At your service.” He gave a polished bow that put Archie’s attempts at gallantry to shame. Morrigan caught her brother’s eye to make sure he knew she had noted it.