No Teeth, Red Cap, and Porridge Shirt crept toward her, their knives still drawn. She backed down the road away from her assailants.

“I am not a… a whore,” said Isabelle, hating the way the word sounded on her tongue, but not knowing how else to convey the meaning.

Isabelle faced her attackers and screamed for all her worth. No Teeth leapt for her and she turned and ran with another ear-piercing screech. She was pushed to the ground with such force it knocked the scream from her lungs. Hands grabbed all over her. She spun on the ground and kicked with ferocity, gaining some satisfaction on hitting something solid and seeing Porridge Shirt doubled over in pain.

“There now, hold her lads, while I gets me turn.”

Isabelle shut her eyes and screamed again. Her voice sounded much louder and more ferocious than she expected. Surprised, she opened her eyes to find her three assailants had vanished. She closed her mouth, but the horrible noise continued. A cloaked figure rushed past her, nothing but a blur of fury, his battle cry blasting through the trees.

He disappeared into the brush after her assailants and the forest sank into an unnatural silence. Isabelle sat on the dirt road, unable to scream, unable to move. She strained to hear what was happening, yet all was still. Suddenly, a barbarian emerged from the forest before her like some fey creature. Isabelle gasped and covered her mouth with her hands. He was a monstrous beast holding a long sword with both hands, his face obscured in shadow.

And he was half-naked.

I greatly appreciate all the support and encouragement I have received from my family, my local RWA chapters, and my fellow Casablanca authors. Thanks to my editor, Deb Werksman, who has taught me much, and my agent, Barbara Poelle, who is a wellspring of motivation and knowledge. Thanks to Andre Tapp, who ensured my French hero spoke something resembling French. Many thanks to Laurie Maus, who served as my beta reader, and my husband, who helped with edits and walked that dangerous, fine line between encouragement and critique—you are one brave man!

Amanda Forester holds a PhD in psychology and worked for many years in academia before discovering that writing historical novels was way more fun. She lives in the Pacific Northwest with her husband and two energetic children.
True
Highland
Spirit
is the third novel in her Highlander series. Her previous novels include
The
Highlander’s Sword
and
The
Highlander’s Heart
. You can visit her at
www.amandaforester.com
.

The Return of Black Douglas

He’ll help a woman in need, no matter where she came from…

Alysandir Mackinnon rules his clan with a fair but iron fist. He has no time for softness or, as he sees it, weakness. But when he encounters a bewitching young beauty who may or may not be a dangerous spy, but is surely in mortal danger, he’s compelled to help…

Thrown back in time to the tumultuous, dangerous Scottish Highlands of the sixteenth century, Isobella Douglas has a lot to learn about her ancestors, herself, and her place in the world. Especially when she encounters a Highland laird who puts modern men to shame…

Each one has secrets to keep, until they begin to strike a chord in each other’s hearts that’s never been touched before…

As brave as she is impulsive, Deirdre Chattan’s tendency to follow her heart and not her head has finally tarnished her reputation beyond repair. But when powerful Highland Laird Quinton Cameron finds her, he doesn’t care about her past—it’s her future he’s about to change…

From the moment Quinton sets eyes on Deirdre, rational thought vanishes. For in her eyes he sees a fiery spirit that matches his own, and he’ll be damned if he’ll let such a wild Scottish rose wither under the weight of a nun’s habit…

With nothing to lose, Deirdre and Quinton band together to protect king and country. But what they can accomplish alone is nothing compared to what they can build with their passion for each other… 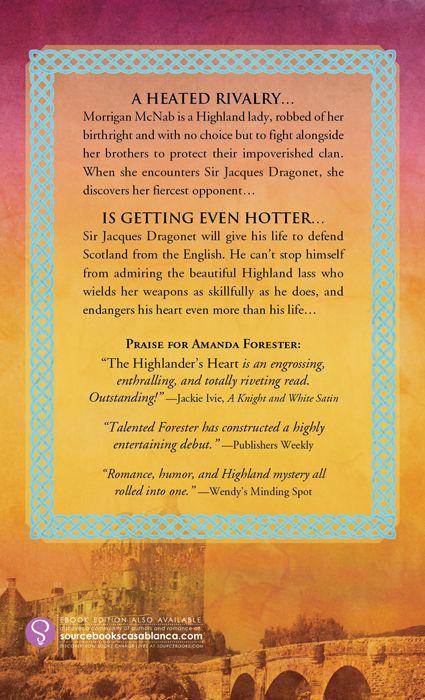 “A lively and exciting adventure.”
—
Booklist

Snake Charmer (Rawkfist MC Book 2) by Bijou Hunter
Red Sky at Night (Home in the stars, #0.5) by Jolie Mason
Wolf Creek by Ford Fargo
Untitled by Unknown Author
Wild for Him by Jill Sorenson
Tenacious Trents 03 - A Reluctant Rake by Jane Charles
The Queen of Bright and Shiny Things by Ann Aguirre
Dan Versus Nature by Don Calame
Los rojos Redmayne by Eden Phillpotts
The Amish Bride of Ice Mountain by Kelly Long