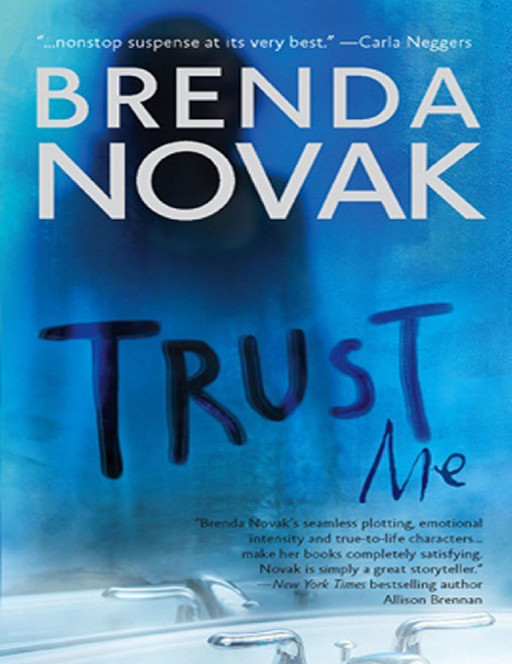 (the concluding book in the Stillwater trilogy)

"Novak brings her dark-edged, quietly intense and completely enthralling Dead' trilogy to a truly thrilling conclusion with this superbly crafted tale of romance and suspense."

"Strong characters bring the escalating suspense to life and the mystery is skillfully played out. Novak's smooth plotting makes for a great read."

"This story is outstanding. The plot is twisted and Novak leaves the reader swearing that you know the culprit from the beginning, only to prove you wrong in the end. The characters are real and easy to believe. Novak's storyline will leave you on the edge of your seat wanting more....I had difficulty putting Dead Right down and was truly shocked at the ending.

"The final book in Novak's 'Dead' trilogy is arguably the strongest of the three.... All the characters are well-defined....This novel is incredibly taut and tense, with some nice sexual tension between the principals-- and the denouement is harrowing."

"Dead Right is a great suspense with a suspenseful plot and super-evil villain that will keep readers entranced and kept me up for a late night just to find out how it ended."

"Well-written, nicely paced, filled with appealing characters and laced with a few surprises, this story neatly wraps up a mystery that has kept readers enthralled for almost a year."

To the editors, agents, authors, fans and friends who've come together to help me raise hundreds of thousands of dollars for diabetes research. Your generosity is an inspiration. May all that positive energy return in the form of blessings to your own life.

Together, we can make a difference!

Welcome to my new series! I generally like to write about small towns (if you've read my Stillwater trilogy you've probably guessed this); but I'm setting this story in my hometown. Sacramento is a bit of a paradox. The metropolitan area contains more than two million people (the fourth largest urban area in California), yet it feels like a small farming community.

Located in the Central Valley, we're surrounded by dairy farms, rice fields, almond orchards and places like Sutter's Fort and Coloma--relics of the Cold Rush. The heroine of this particular novel lives in the San Joaquin River delta. Sacramento's delta is a place with its own peculiarities--including towns that consist of no more than four corners, myriad waterways, bridges and wetlands.

another charitable organization that started in this city. I simply translated the passion, drive and determination I feel about fighting the illness my youngest son has into the passion, drive and determination Skye Kellerman feels about protecting the victims of violent crime. The cases she handles are varied and certainly challenging, but you'll soon see that the most frightening case she faces is her own.

In Stop Me (out in July) and Watch Me (out in August), you'll learn more about Skye's two friends, Jasmine and Sheridan, both of whom are partners in The Last Stand. They have their own reasons for getting involved--and those reasons are every bit as compelling as Skye's.

ww.brendanovak.com , w
here you can take a virtual tour of The Last Stand office, read a prologue to this story that doesn't appear anywhere else, download a free screen saver just for signing up on my mailing list, enter my monthly drawings for prizes--and more. You can also check out the items in the May 2008 Online Auction for Diabetes Research.

Here's wishing you many hours of reading pleasure!

Hell is empty and all the devils are here.

David Willis glanced up at the man leaning into the cubicle surrounding his cluttered desk. Detective "Tiny" Wyman, his best friend on the force and a damn good cop, was even larger than he was, with skin like burnished copper and a ready smile that always seemed at odds with the depth of sadness in his brown eyes. He took his crime-fighting seriously; he also wasted few words. When he talked, most people listened. Including David.

"Heard what? That I'm behind on my paperwork again?" he joked.

Tiny shoved giant hands into the pockets of his khaki pants, but the casual pose didn't make him look any more comfortable in his clothes. Tiny just wasn't the kind of man who was meant to wear slacks and a sports jacket, let alone a tie. "You're always behind on your paperwork," he grumbled with a crooked grin. "You think I'd waste my valuable time pointin' that out?"

When his smile didn't linger, David knew he hadn't stopped by to spar with him. "No," he said. "What's up?"

Tiny yanked at his tie as if it were choking him. '"Member that guy we put away for attackin' that little blond woman in the middle of the night?"

David had handled enough cases over his thirteen years with the Sacramento PD that, with such a sketchy description, he might not have instantly recalled this particular assault. But Tiny's mention of "that little blond woman" brought the details immediately to mind. Probably because those details hadn't been that deeply buried to begin with. He hadn't talked to Skye in a few months, but she was never far from his thoughts. "Yeah, I remember. Burke got eight to ten."

"Turns out it'll be closer to three."

Rocking back in his chair, David tossed his pen on the stack of paperwork he'd been forcing himself to complete. "I knew he was coming up for his first parole hearing. But last I heard, there wasn't a snowball's chance in hell he was going to get it."

"He shouldn't have gotten it," Tiny responded. "Burke is dangerous.

But..." He gave up fiddling with his tie, his attitude one of surrender to another day at the office. "I guess he ratted out a fellow inmate, which meant San Francisco PD could close two previously unsolved homicides. They recommended him to the parole board."

David shot to his feet. "Didn't anyone read my damn letter? Why didn't they call us first? Check this guy out?"

"Did he tell them the body count along the river stopped once our friendly dentist went to prison?"

"Of course. And they said it could just as easily be a coincidence."

Tiny finally cracked his usual broad smile. "I say they can bank on our intuition. But they want more."

More. That was why the chief had questioned him about the unsolved cases, wanting to know if he was any closer to developing a solid connection to Oliver Burke. Jordan had been looking for something tangible to contest San Francisco's opinions. And David hadn't been able to give it to him. But their meeting hadn't concerned him too much. He hadn't realized what was on the line. He'd figured he'd have at least two more years to uncover the missing link.

"This is bullshit." David nudged his friend aside as he squeezed through the opening of his cubicle, intent on finding Jordan. But Tiny grabbed his arm.

"Save your breath, man. There's nothing he can do. The decision's been made. Dr. Burke walks next week."

"Next week? Doesn't anyone care what he might do?" Two other detectives in the violent crime unit stuck their heads out into the hall. David used a pointed stare to encourage them to mind their own business and shifted his attention back to Tiny.

"Seems that San Francisco cares more about closing old cases," Tiny said. "By rewarding Burke, they give others an incentive to step forward.

There're some gangbangers in there who know a lot of shit. I think the SFPD

would've fought this all the way to the governor, trying to get a pardon if they had to."

Obviously, it hadn't been necessary to go that far. Burke's early release had been far easier to accomplish than David would've believed possible. "But if he attacks again, he'll know better than to leave his victim alive to testify against him. He made that mistake once and it landed him in prison."

"Which was Chief Jordan's argument."

"He was told we can't take every 'might' into account or we'd never be able to do our jobs."

Tiny ran a hand over his bald head. "She matters to you, right?"

As usual, Tiny's voice was a low rumble, but David couldn't help noticing the subtle inflection. He ignored it, as well as the memory of Tiny warning him that he was getting too emotionally involved with Skye. Then, as now, he'd been trying to reconcile with his ex-wife.

"I wouldn't put it past Burke to seek her out--to take what he couldn't get from her, along with an extra measure of revenge." The image created by his own words made him sick.

Tiny's gaze remained steady. "Neither would I."

"We have to do something."

"What? Unless we find the proof we're missing on those old murders, or he commits another crime, there's nothin' we can do." He released a long, laborious sigh. "You want me to call her?"

David wished he could let Tiny deliver the news. Or someone else.

This was the last thing he wanted to tell Skye. But he refused to take the easy way out. It had to be him. "No, I'll do it."

"I'm sure." With a curse, he smacked the divider as Tiny left. Tiny didn't bother to look back. He knew David too well, shared his frustration.

But several heads popped into the hall again.

"What are you staring at?" David growled.

Everyone disappeared, but intimidating his coworkers didn't make him feel any better. How was he going to tell Skye that the fear she faced daily--after surviving Burke's attack--was about to get a lot worse?

Skye Kellerman's shoulder blades tensed as she heard tires in her gravel drive. It was a cold morning in early January, not dark, but a thick blanket of fog made her feel completely isolated. Cut off from the rest of the world.

Hurrying to the antique secretary she'd inherited, along with the house, when her mother passed away a year earlier, she selected her Kel-Tec P-3AT semiautomatic handgun over her Sig P232--because it was lighter, thinner and easier to conceal. Carrying it with her, she ran to get a T-shirt from her bedroom. She wanted to cover the cleavage and stomach revealed by thejogging bra and Lycra shorts she wore while working out. She was self-conscious about her breast size, which drew more attention than she felt comfortable with.

A car door slammed and footsteps approached the house. Heavy footsteps. The footsteps of a man.

Pulling on a baggy T-shirt that said The Last Stand: Where Victims Fight Back, she went to peek through the wooden shutters of her front windows, then the peephole she'd drilled in the door. But the fog was too thick, the morning shadows too murky to make out more than a large, dark shape coming toward her.

OwnedbytheNight by Scarlett Sanderson
Island of the Forbidden by Hunter Shea
Frog Music by Emma Donoghue
My Next Step by Dave Liniger
Payback (The Canine Handler Book 1) by Hillegas, Maria
Ruled by the Rod by Sara Rawlings
Unbearable: Russet Falls Series by Vega, W.H.
The Neighbors by Ania Ahlborn
The Trouble with Flying by Rachel Morgan
McCullen's Secret Son (The Heroes Of Horseshoe Creek Book 2) by Rita Herron