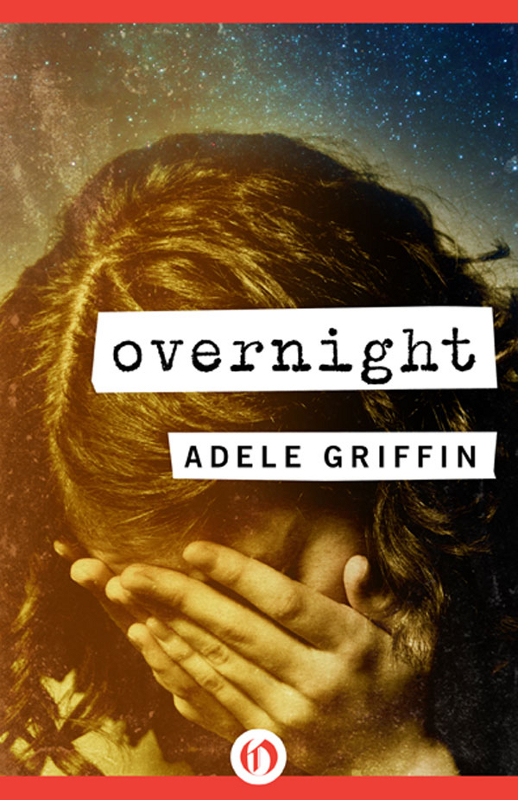 A Personal History of Adele Griffin

G
RAY FORGOT HER SLEEPING
bag for Caitlin Donnelley’s birthday party. She did not see that it was missing until her mother pulled up to the front doors of Fielding Academy. When she reached for her overnight things piled in the backseat, it was not there.

“My sleeping bag!” she exclaimed. “I left it at home!”

“Oh, for goodness’ sakes, Gray.” Her mother sighed. “How could you be so forgetful?”

“If I go back, you’ll both be late for school.”

In the backseat, Gray’s younger brother, Robby, began to whimper. He was seven, four years younger than Gray, and he copied whatever she did.

Mrs. Rosenfeld rested her forehead on the steering wheel, practicing her yoga breathing to keep calm. When she lifted her head, she said, “Gray, get out of the car this instant so that I can drop off Robby at school. Then I will go home and collect your sleeping bag and I will bring it to Fielding later this morning.”

“You know which one! The pink one with the fairies on it!” Gray insisted as her mother drove away. Her breath, damp and fast, made icy puffs in the February cold. “Not any of the other ones! The pink one!” Her voice was lost to the car, but she continued shouting through her fingertips as it disappeared. The last thing she saw was Robby mouthing teary good-byes from the rearview window.

Later that morning, one of the school secretaries delivered Gray’s sleeping bag to the sixth-grade classroom. It was not her fairy-folk bag. It was the navy blue bag that her father took on fishing trips.

When Caitlin Donnelley and Kristy Sonenshine saw it, they exchanged google eyes and stuck out their tongues at each other. Gray saw them do this and it made her feel dizzy, as if she might throw up. Worse, she would have to sleep without her fairy folk. Gray liked to believe that at night, while she fit snug inside the bag, the fairies came alive.

Alive like real people but better joining together hand in hand in an enchanted circle protecting me from all bad things.

The navy bag looked twice the size of the other girls’ bags. It smelled like the woods and was dark as a midnight ocean. Who would protect her now?

Mrs. Donnelley was waiting to catch the girls as they spilled out of Fielding Academy’s front doors at the school day’s end.

“Hello there, Miss Gray! How’s your mom? I meant to call her yesterday.”

Mrs. Donnelley nodded hard, as if her head were being jerked by puppet strings. Yes yes yes—casting a spell that would make the cancer leave. In that way, Gray’s mother and Mrs. Donnelley were alike. They both put Safety first. Safety first and no mistakes, which was why Gray’s mother and Caitlin’s mother were friends. Gray had slept over at Caitlin Donnelley’s house lots of times, and she had watched Mrs. Donnelley’s struggle to make each detail of her home perfect, indoors and out. Each dead leaf picked quickly off the yard and every slice of toast crisped tan.

The way my mom used to be but not anymore.

As girls trundled outside, lugging their sleeping bags, Mrs. Donnelley gave instructions. “I can take four, so that means three of you girls must go with Topher in his car. I don’t have enough seat belts to buckle up everybody!”

She pointed across the parking lot to where Topher was leaning against the side of his battered Volkswagen. Topher was Caitlin’s half brother. He was in college and home for midwinter break. He had a goatee. When he laughed, he crossed his arms and tipped back his head like a genie. Gray had known Topher since she was five years old, and she still did not like to talk much when he was around.

Quickly, Gray jumped into the minivan so that she could sit right behind Mrs. Donnelley. The three girls who clambered in after her were Leticia Watkins, Serena Hodgson, and Zoë Atacropolis. Zoë sat up front so that she could talk Mrs. Donnelley’s ear off. Topher would be taking Caitlin and Kristy and Martha Van Riet. Already they were crossing the parking lot, Kristy springing next to Caitlin like a puppy and Martha snaking up behind them.

Seven girls in all. Of the fifty-one sixth-graders enrolled at Fielding Academy for Girls, they were the “Lucky Seven.” That’s what they called themselves. Other girls called them the “cool group.” Or the “in crowd.” Or the “snobby girls.” Or “Martha’s group.” Or “
those
girls.”

Gray looked out the window to where some of the uninvited girls were standing, plumped in wool coats, waiting for buses and carpools. The uninvited girls, eyes lowered, watched as Mrs. Donnelley’s minivan and Topher’s Volkswagen circled the parking lot, and their faces pretended indifference. After all, it was Friday! The weekend! Who cared about Caitlin Donnelley? Oh, they weren’t missing anything much!

Gray knew what they were thinking behind their faces. This past fall, when she had been nearly expelled from the Lucky Seven and Martha had not invited her to her roller-skating party, Gray had thought those same kinds of thoughts.

Before anyone else saw, Gray flicked her fingers good-bye at Annie. Then she turned away. She pushed her seat forward so that she could smell the perfume at the back of Mrs. Donnelley’s neck. She used the tips of her shoes to pedal her wrong sleeping bag deeper under the driver’s-side seat and she clicked on her seat belt very loud so that Mrs. Donnelley would hear and appreciate Gray’s carefulness.

“It’s all a mistake. How could this be?” Gray’s mother had asked this question in the hospital last spring, Robby tucked on one side of her and Gray curled up on the other, though the bed was too narrow and one of Gray’s legs was getting cold, pressed-jammed hard into the bed’s metal side rails.

Gray had thought her mother meant how could this be that she was lying in this bed, in this hospital. A mistake, because she wasn’t sick after all!

Later, Gray understood what her mother really meant. That no matter how Safe a person tried to be, cancer was a mistake forced on a few unlucky people.

“And are there goody bags?” asked Serena.

“And do we get to watch movies?” asked Zoë.

Gray adored Caitlin’s room. The furniture was quaint, like
Little House on the Prairie
if Ma and Pa Ingalls had been rich. Mrs. Donnelley had decorated it herself and kept the room pin-straight, the curtains and canopy bed freshly fluffed and vacuum marks on the carpet. There was a Victorian dollhouse in one corner and a pigeonhole desk in another corner. Neither of these pieces was used, since both were antiques. Besides, Caitlin had hated her dolls since she was nine—had hated everything about her room, in fact, since she was ten—and she did all her homework on the computer at her built-in study unit.

What Gray loved most about Caitlin’s room were Caitlin’s fairy paintings. There were four paintings altogether, one for every wall and season. These were not silly cartoon pictures, either, but framed portraits of ravishing enchantresses with dewy eyes, veined wings, and the tingling of the outdoors in their cheeks.

The winter fairy, dressed in cobwebby white, lounged like a fashion model along the branch of an icicle-spiked tree.

Two spring fairies chased each other in a daisy field under an azure sky.

The summer fairy kneeled on a lily pad, absorbed in her watery reflection.

The autumn fairies were gathered around the stump of a tree, some leaning against cushions, their faces serious, as if they were at a Seder.

Autumn was Gray’s least favorite picture and the one she stared at most. But the autumn fairies did not fit with the other paintings. For one thing, the painting was overcrowded, and not just with fairies, but spindly-legged frogs and hunchbacked gnomes and pop-eyed hobgoblins and even one leering, rickety cricket.

For years, ever since Gray had first started staying overnight at Caitlin’s house, she had put herself to sleep wondering about those ugly autumn wood creatures. Why had the fairies invited them to their Seder? Why? Why? She would stare and stare until her eyes lidded over.

“Come on, Gray! Drop your bags! We’re going down to play Enchanted Castle.” Caitlin nudged Gray from her trance. “Stop looking at that picture. Did I tell you I get to redo my room any way I want for a birthday present? Dad and Mom said okay, even for humongous posters and a futon, if I want.”

“Duh! I know!” Caitlin laughed shrilly. “Whatever, though! It’s changing in, like, a week!”

The other girls tossed down their bags and changed quickly from their uniforms into jeans and sweaters. Giggling and pushing, they herded out the door. Then down the hall, down the stairs, and down the stairs again to the family room in the basement.

Gray listened to them go. Alone in Caitlin’s room, she changed clothes and sighed. The other girls’ sleeping bags were so pretty, so
right
. Pale rainbow colors or tiny sprigs of flowers. Gray dropped her stupid, ugly sleeping bag and kicked it hard as a soccer ball under Caitlin’s bed, hiding it from sight. She despised the idea of sliding into it tonight, trapped inside a giant’s stinky sock while everyone else was tucked into butterfly cocoons.

Hot, easy tears welled up in her eyes. It wasn’t fair. It wasn’t fair that this new version of her mother made so many mistakes. Mistakes on account of her sickness, mistakes that might seem silly or thoughtless but also were careless enough to hurt.

The others already had set up the Enchanted Castle board by the time Gray joined them in the family room. Gray frowned as she slid into her chair. Enchanted Castle was dull. The object of the game was either to capture the Evil Queen or to find her three treasures—her crystal ball, her golden nightingale, and her jeweled crown, all of which were hidden somewhere in her kingdom. But if the Evil Queen managed to lock up three princesses in the dungeon, then she won.

The Evil Queen had the best time of anyone. This afternoon, the Queen was Caitlin, obviously. Gray was surprised that Caitlin wanted to play Enchanted Castle at all, especially with Martha rolling her eyes and saying, “Ugh, Caitlin, it’s so spanky, so loserish, this game.”

Caitlin insisted, though. Maybe just to be stubborn, or maybe since it was her birthday. Or maybe because she really liked Enchanted Castle and she knew that today was one of the few times she could get away with making everyone participate.

On her third turn, Gray began to feel sleepy, the same stupor that sometimes overcame her during afternoon classes. She could hardly keep her eyes open.

“I don’t really want to play Enchanted Castle anymore,” she said. “If that’s all right with you, Caitlin?” She figured it would be. If she quit, Caitlin had a better chance of winning.

But Martha sang, “Rainy Gray, go away, come again some other day—
not!”

Gray took her princess off the board and stood. She ignored Martha. To say something back meant trouble. Martha always shot the dart that started a fight. And Martha never let go. Last year, Martha had been so nasty to Beth Terrene that by March, Beth had transferred from Fielding Academy to Saint Carmela’s. She said it was because her grades were bad. Which was probably true. How could Beth have concentrated on school with Martha Van Riet making every second of her life more miserable than the last?