Read Try Not to Breathe Online

Try Not to Breathe 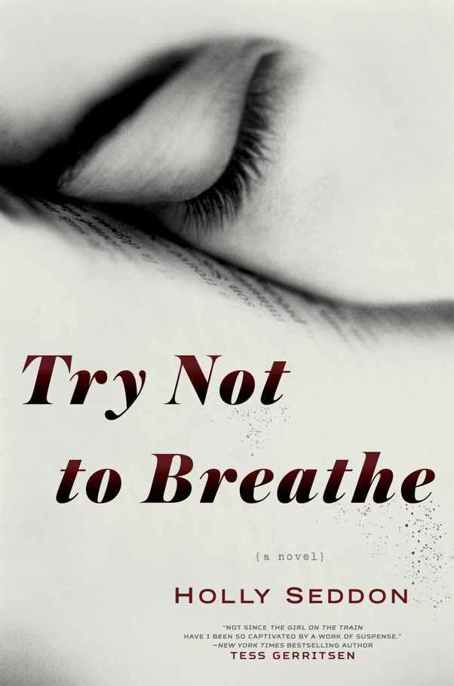 Try Not to Breathe
is a work of fiction. Names, characters, places and incidents are the products of the author’s imagination or are used fictitiously. Any resemblance to actual events, locales, or persons, living or dead, is entirely coincidental.

Published in the United States by Ballantine Books, an imprint of Random House, a division of Penguin Random House LLC, New York.

Originally published by Corvus, a division of Atlantic Books, London.

B
ALLANTINE
and the
H
OUSE
colophon are registered trademarks of Penguin Random House LLC.

Title: Try not to breathe : a novel / Holly Seddon.

M
usic thudded through Amy’s body and seized her heart. Music so loud that her eardrums pounded in frenzy and her baby-bird ribs rattled. Music was everything. Well, almost everything.

Later, the newspapers would call fifteen-year-old Amy Stevenson a “ray of sunshine,” with “everything to live for.” Her headphones buzzed with rock and pop as she trudged the long way home, rucksack sagging.

Amy had a boyfriend, Jake. He loved her and she loved him. They had been together for nearly eight months, walking the romance route around the “top field” at school during break time, hot hand in hot hand, fast hearts synchronized.

Amy had two best friends: Jenny and Becky. The trio danced in a perpetual whirlpool of backstories, competition and gossip. Dizzying trails of “she-said-he-said-she-said” preceded remorseful, sobbing hugs at the end of every drunken Saturday night.

Nights out meant lemon hooch in the memorial park or Archers and lemonade at the Sleeper Pub, where a five-year-old wouldn’t have been ID’d. Nights in meant
My So-Called Life
and
Friends
. After school, time ticked down to 6 p.m. when phone calls hit the cheap rate. She would talk until her stepdad, Bob, came into the dining room and gave her
that
look: it’s dinnertime, get off my phone.

Amy’s Kickers bag grew heavier with every step. She shifted it awkwardly to the other shoulder, tangling her headphone wires so that one earphone fell from her ear, the sounds of the real world rushing in.

She had taken the long way home. The previous day she’d got back early and startled Bob in the kitchen as he stirred Coffee-mate into his favorite mug. At first he’d smiled, opening his arms for a hug before realizing that she’d made it back in record time and must have gone across the field.

She’d had to sit through half an hour of Bob’s ranting and raving about walking the safe route home, along the roads: “I’m saying this because I love you, Ames, we both love you and we just want you to be safe.”

Amy had listened, shuffled in her seat and stifled yawns. When he’d finally stopped, she’d stomped upstairs, flopped onto her bed and smacked CD cases around as she made an angry mix tape. Rage Against the Machine, Hole and Faith No More.

As she’d surprised Bob the day before, Amy knew he was likely to be home already. Waiting to catch her and have another go at her. It wasn’t worth the hassle even though the longer walk was especially unwelcome on Tuesdays. Her bag was always really heavy, as she had French and History and both had stupid, massive textbooks.

Amy hated learning French with a passion, the teacher was a dick and who needs to give a window a gender? But she liked the idea of knowing the language. French was a sexy language. She imagined she could seduce someone a bit more sophisticated than Jake by whispering something French in his ear. She could seduce someone older. Someone a lot older.

She loved Jake, of course, she meant it when she said it. She had his name carefully stenciled onto her bag with a Tipp-Ex pen, and when she imagined the future, he was in it. But over the last few weeks she had begun to see the differences between them more and more.

Jake, with his wide smile and deep brown puppy-dog eyes, was so easy to spend time with, so gentle. But in the time they’d been going out, he’d barely plucked up the courage to put his hand inside her school shirt. They spent whole lunch hours kissing in the top field, and one time he’d climbed on top of her but she’d got a dead leg and had to move and he was so flustered he barely spoke for the rest of the day.

It had been months and months and she was still a virgin. It was getting embarrassing. She hated the idea of being last, hated losing at anything.

Frustrations aside, Amy hoped Jake had skipped judo club so he could come and meet her. Jake and his younger brother, Tom, were driven home from school every day because his snooty mum worked as the school secretary. His family lived in the double-fronted houses of Royal Avenue. He was always back before Amy reached the two-bedroom terrace house on Warlingham Road, where she lived with Bob and her mum, Jo.

Jake’s mum, Sue, didn’t like Amy. It was like she saw her as someone who would corrupt her precious baby. Amy liked the idea that she was some kind of scarlet woman. She liked the idea of being any kind of woman.

Amy Stevenson had a secret. A secret that made her stomach lurch and her heart thump. None of Amy’s friends knew about her secret, and Jake certainly didn’t know. Jake could never know. Even Jake’s mum, with her disapproving looks, would never have guessed.

Amy’s secret was older. Absolutely, categorically a man. His shoulders were broader than Jake’s, his voice lower, and when he made rude remarks, they came from a mouth that had earned the right to make them. He was tall and walked with confidence, never in a rush.

Her secret wore aftershave, not Lynx, and he drove a car, not a bike. Unlike Jake’s sandy curtains, he had thick, dark hair. A man’s cut. She had seen through his shirts that there was dark hair in the shallow dip at the center of his chest. Her secret had a tall, dark shadow.

When Amy thought about him, her nerves exploded and her head filled with a bright white sound that shut out any sense.

Her secret touched her waist like a man touches a woman. He opened doors for her, unlike the boys in her class, who bowled into corridors like silver balls in a pinball machine.

Her mum would call him “tall, dark and handsome.” He didn’t need to show off, didn’t need to boast. Not even the prettiest girls at school would have thought they stood a chance. None of them knew that Amy stood more than a chance. Way more.

Amy knew that he would have to stay a secret, and a short-lived one at that. A comma in her story, nothing more. She knew that she should keep it all locked in a box; perfect, complete, private, totally separate from the rest of her soundtrack. It was already a memory, really. Months from now she would still be snogging Jake at lunchtime; bickering with her friends; coming up with excuses for late homework. She knew that. She told herself she was cool with that.

The feeling Amy got when he touched her hip or brushed her hair out of her face was like an electric bolt. Just the tips of his fingers made her flesh sing in a way that blocked out everything else in the world. She was both thrilled and terrified by thoughts of what he could do to her, what he would want her to do to him. Would they ever get the chance? Would she know what to do if they did?

That kiss in the kitchen, with the sounds of the others right outside. His hands on her face, a tickle of stubble that she’d never felt before. That one tiny kiss that kept her awake at night.

Amy turned onto Warlingham Road and the ritual began. She put her bag down on the crumbly concrete wall. She unrolled the waistband of her skirt so it was no longer hitched up. She decanted her things, finding her Charlie Red spray and cherry lip balm.

Amy shook the spray and let a short burst of sweet vapor fill the air. Then, after looking around self-consciously, she stepped into the perfumed cloud, like she’d seen her mum do before a night at the social club.

She ran the lip balm along her bottom lip, then the top, kissing them together and then dabbing them matte with her jumper. On the off chance that Jake was waiting, she wanted to be ready, but not make it obvious that she’d tried.

Amy’s Walkman continued to flood her ears. “Do You Remember the First Time?” by Pulp kicked in and Amy smiled. Lead singer Jarvis Cocker smirked and winked in her ears as she set everything back in the bag, shifted it to the other shoulder and continued down the road.

She saw Bob’s van in the road. Amy was twelve doors away from home. As she squinted, she could make out a figure walking toward her.

When Amy realized who it was she felt a rush of nausea.

Had anyone seen him?

Had Bob seen him?

How could he risk coming to the house?

Above everything, Amy felt a burst of exhilaration and adrenaline thrusting her toward him like iron filings to a magnet.

Jarvis Cocker was still talking dirty in her ears, she wanted to make him stop but didn’t want to clumsily yank at her Walkman.

She held her secret’s gaze, biting her lip as she clicked every button until she crunched the right one down and the music stopped. They were toe-to-toe. He smiled and slowly reached forward. He took one headphone, then the other from the side of her head. His fingers brushed her ears. Amy swallowed hard, unsure of the rules.

“Hello, Amy,” he said, still smiling. His green eyes twinkled, the lashes so dark they looked wet. He reminded her of an old photo of John Travolta washing his face between takes on
Saturday Night Fever
. It had been printed in one of her music magazines, and while she thought John Travolta was a bit of a nobhead, it was a very cool picture. She’d stuck it in her hardback Art & Design sketchbook.

“Hello…” she replied, in a voice a shade above a whisper.

“I have a surprise for you…get in.” He gestured to his car—a Ford Escort the color of a fox—and opened the door grandly, like a chauffeur.

Amy looked around. “I don’t know if I should, my stepdad’s probably watching.”

As soon as her words were in the air, Amy heard a nearby front door, and ducked down behind the Escort.

A little way up the pavement, Bob set his tool bag down with a grunt. He exhaled heavily as he fumbled for his keys and opened his van. Unaware he was being watched, Bob lumped the tool bag into the passenger seat and slammed the door with his heavy, hairy hands. He waddled around to the driver’s seat, heaved himself up and drove away with a crunch of gears, the back of his van shaking like a wagging tail.

As excited as Amy was, as ready as she was, a huge part of her wanted to sprint off up the road and jump into the van, safe and young again, asking Bob if she could do the gears.

“Was that your stepfather?”

As she stood up and dusted herself down, Amy nodded, wordless.

“Problem solved, then. Get in.” He smiled an alligator smile. And that was that. Amy had no more excuses and she climbed into the car.