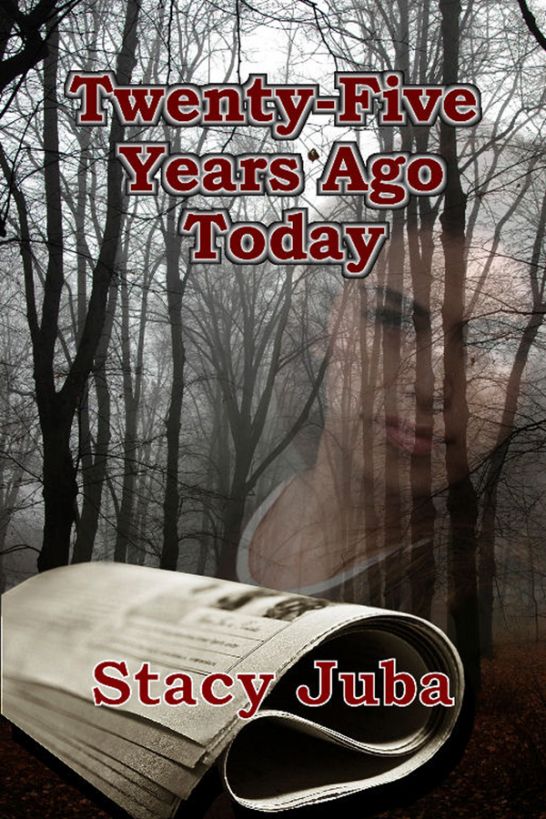 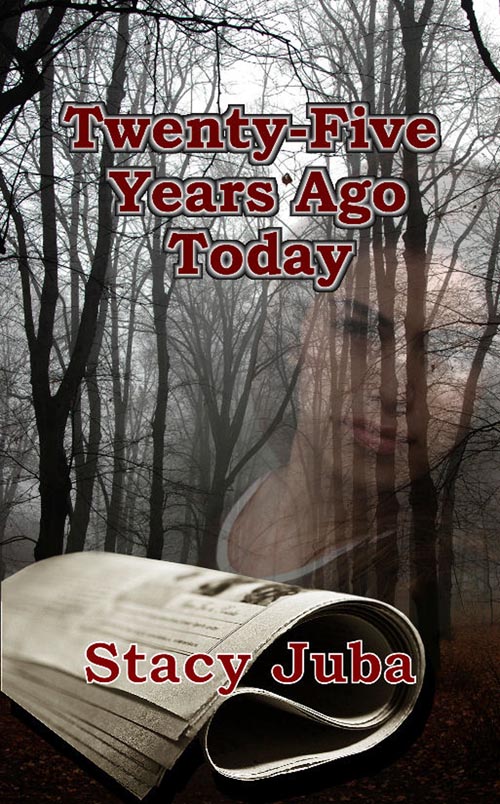 "
Twenty Five Years Ago Today
is an
intriguing mystery that should not be overlooked."
Midwest Book
Review

"With just the right blend of mystery,
romance, and danger,
Twenty Five Years Ago Today
will be
thoroughly enjoyed by anyone who is smart enough to pick up a copy
of it." Lynn Cunningham,
Fresh Fiction

"Stacy Juba has written a page-turner! This
has to be one of my favorite mystery books that I've read this
year. The characters are well written and have so much depth that
it feels like this has actually happened … Book club groups will
enjoy this book because there is so much that happens between its
pages."
Book Club Queen

"Being on a hit reality show not once, but
three times, made
Sink or Swim
really hit home for me. I
could identify with Cassidy on many levels. This novel was so
entertaining and suspenseful and had me so on the edge of my seat
that I read it in one plane ride from Philly to Vegas. It was an
easy read and extremely well written… I would love to see it come
out as a movie one day!"
Stephenie LaGrossa, owner of GiGI
Restaurant & Lounge, Philadelphia PA, Television personality
and fan favorite Survivor: Palau, Guatemala, Heroes vs.
Villains

"After being on a reality show,
Big
Brother 10
on CBS and Showtime, reading
Sink or Swim
made me feel like I was Cassidy. People don't ever know what
happens behind the scenes. I thought it was a great read and kept
me in suspense."
Michelle Costa, contestant Big Brother
10

"Once again author Stacy Juba has penned a
novel that is definitely not going to sink, it will do more than
just swim: It will rise to the top with no lifeboats needed. Read
this outstanding second novel by the author of
Twenty Five Years
Ago Today
to find out what happens to Cassidy. Walking the
plank is dangerous and sinking to the bottom even more."
Fran
Lewis, Bookpleasures.com

This title is available in trade
paperback

For twenty-five years, Diana Ferguson’s killer
has gotten away with murder. When rookie obit writer and newsroom
editorial assistant Kris Langley investigates the cold case of the
artistic young cocktail waitress who was obsessed with Greek and
Roman mythology, not only does she fall in love with Diana’s sexy
nephew, but she must also fight to stay off the obituary page
herself.

Names, characters and incidents depicted in
this book are products of the author’s imagination or are used
fictitiously. Any resemblance to actual events, organizations or
persons, living or dead, is entirely coincidental and beyond the
intent of the author or the publisher.

Discover other titles by Stacy Juba at
http://www.smashwords.com/profile/view/stacyjuba

This ebook is licensed for your personal
enjoyment only. This ebook may not be re-sold or given away to
other people. If you would like to share this book with another
person, please purchase an additional copy for each person. If
you're reading this book and did not purchase it, or it was not
purchased for your use only, then please return to Smashwords.com
and purchase your own copy. Thank you for respecting the hard work
of this author.

Please note that this edition contains
excerpts of Stacy Juba's books
Sink or Swim
and
Dark
Before Dawn
.

K
ris Langley stared
at the bright newsprint lit up on the microfilm reader. The top
headline leaped off page one. "Missing Barmaid Murdered." She
squinted over the story of Diana Ferguson, a young woman found
bludgeoned to death in the woods. In little over a week, it would
be the twenty-fifth anniversary. A quarter of a century ago, Diana
must've dressed and driven out as always. An evening like any
other. By the end of the night, she was dead, her life extinguished
like the other victims on fate's hit list.

Most people had forgotten Diana by now. In
the black and white yearbook photograph, she didn't smile. Straight
dark hair curtained her serious oval face. Diana had her arms
crossed on a table, slender fingers too delicate to protect her
from a killer.

Kris flipped to a blank page in her notebook,
scribbled "Diana Ferguson" and stopped writing. Resurrecting the
tragedy in her "25 and 50 Years Ago Today" column would catch
readers’ attention, but it seemed inappropriate.

She jumped as Dex Wagner, the
seventy-year-old editor-in-chief of the
Fremont Daily News
,
slapped a rolled-up newspaper against someone’s desk. "Jacqueline,
why the hell didn’t we have this theater group feature? The Fremont
Community Players are in our own backyard."

Suppressing a grin, Kris swung around in her
seat. She could use a distraction right about now. Dex waved the
competition paper in the air, red circles and slashes marking half
the page. In her three weeks as editorial assistant, Kris had
enjoyed Dex’s tantrums. So far, none had been directed at her.

Managing Editor Jacqueline McCormack tossed
back her blonde ponytail, gathered in a tan fabric scrunchie. She
owned a world class selection of ponytail holders that complemented
her designer wardrobe. Kris couldn't help thinking of her as a
thirty-five-year-old cheerleader. Corporate Barbie.

"We ran a story last week in our
entertainment section," Jacqueline said. "They got the idea from
us. Gosh, Dex, are you trying to blind me with that
underlining?"

Dex paced to the oak bookshelves and back to
Jacqueline's neat desk. His stomach bulged under a rumpled gray
suit and his wrists hung out of jacket sleeves a couple inches too
short. "I think we missed it."

"Trust me," Jacqueline said. "I put a
headline on it myself. You do read beyond the front, don’t you,
Dex?"

Grumbling under his breath, Dex opened
The
Greater Remington Mirror
, a large daily that covered the ten
towns in their readership area and more. Kris saw another column
ballooned in red marker.

He pressed his index finger against the lead
paragraph, his penguin-patterned tie flapping as he stooped
forward. "What about the stabbing of that Miles kid? We should be
talking to his family and we haven't even contacted them. For
Christ's sake, do I have to keep track of everything?"

"Relax, I'm working on that," Bruce Patrick,
the police and court reporter, said from the doorway. He swaggered
over and hopped onto the edge of Jacqueline's desk.

"I just got off the phone," he said. "The
parents are basket cases, but the siblings said I could come by
tonight. And it's an exclusive."

A 19-year-old college student had murdered
his classmate, Scott Miles, in a fight that went too far. Kris had
edited the obit, stomach queasy as she cut "beloved son and
brother" out of the text. Dex insisted such phrases only belonged
in paid death notices.

Unlike the Diana Ferguson case, there was no
mystery to this homicide. Many young people had witnessed the
brawl, which started over a girl. It had lingered in her memory,
though, a teenage boy who went to a party and left dead in an
ambulance. Another individual singled out by fate, never suspecting
he had no future. He picked the wrong girl. For that, he died.

Kris shuddered despite the heat in the
newsroom. The family members must feel like their world had spun
out of control. She remembered the grieving process well: walking
around as if in warm Jell-O, arms and legs heavy, head difficult to
hold up, and crying until numbness froze the tears. Forgetting had
disturbed her the most, slipping away into the calm relief of
sleep, then jolting awake in cold horror.

Jacqueline's ponytail bounced in glee.
"They'll talk?" She turned to Bruce. "Terrific. Have you assigned a
photographer?"

Bruce rested his notebook on his thigh. "You
bet. I didn't mention the photos, but once we're there, I'm sure
they'll go along with it."

"Get two or three color shots for the front,"
Jacqueline said, a lilt in her voice.

Kris abandoned her quiet corner of the
newsroom and strode over to the group. Bruce and Jacqueline had
never suffered tragedy in their lives, or they wouldn't act so
blasé.

No one noticed Kris’s presence. She spoke
quickly, before she lost her nerve. "I know you want a good story,
but have a little sympathy. Sending a photographer unannounced
would be taking advantage of these poor people."

Her co-workers regarded her with blank
expressions.

"Why?" Bruce asked. "The kids are of age.
It’s not like we’re exploiting pre-schoolers."

"If they're inviting a reporter into their
home, they should realize we intend to play up the story,"
Jacqueline said.

"They'll be emotional," Kris said. "A
photographer will make them feel worse. The least you could do is
prepare them."

Jacqueline folded her arms, covering a
horizontal row of gold buttons on her biscuit-colored blazer. "I'm
sure they expect it, but Bruce was smart in setting it up this way.
If they have doubts, they'll be more likely to say yes once our
staff has had a chance to develop a rapport. If the pictures bother
them, the family can always decline."

"They'll feel pressured," Kris said. "They
have enough to deal with right now. You’ve got your exclusive. Why
can't you just run photos of the boy who died?"

"Kris, this is our job, not yours." Coldness
had replaced Jacqueline's lilt. "This paper tells it like it is. If
you can't accept that, then maybe you shouldn't work in a
newsroom."

"Maybe you should treat your sources like
human beings."

"Why don't you stay out of things that don't
concern you? As I recall, you have no news experience. I'm not even
sure why you were hired in the first place." Jacqueline glared at
Dex.

They all knew the answer to that. The
previous editorial assistant had quit on Jacqueline's vacation. Dex
grew impatient and placed a classified ad. Kris admitted she
preferred the dreaded four-to-midnight shift, and he hired her on
the spot. His judgment wasn't good enough for Jacqueline, who had
reminded him of the three-month probation for all employees.

Dex's shaggy salt and pepper eyebrows curled
downward. "Kris does fine. She's bright and talented. Give her a
chance to learn." He glowered at Bruce. "Next time you're working
on a hot story, check with me."

He stalked to his desk, leaving the others
gaping after him. Her neck and shoulder muscles tense, Kris
released a deep breath. She needed this job. Like it or not, she
was stuck working with Barbie. "Sorry if I offended you,
Jacqueline. I just wanted to give you another perspective."

Jacqueline ignored her and gestured to Bruce.
"Come on, let's discuss tomorrow's budget."

He snapped to attention and followed her into
the conference room. Jacqueline carried herself with the posture of
a model, her back straight and an upward tilt to her chin.
Jacqueline and her budget. Kris had once asked Dex if the paper was
in okay shape, money-wise. She’d assumed Jacqueline was obsessed
with the editorial department’s finances. Dex just laughed and
said, "That’s news lingo for story line-up."

As others in the newsroom headed out, Kris
drifted back to the microfilm machine and her research. Her editors
demanded eight historical facts per issue. Dex told her to play up
light local fluff as people liked seeing their names in print,
while Jacqueline said to emphasize hard news. Kris found herself
trying to please them both.

Sueño del Fevre by George R.R. Martin
The Fortress of Solitude by Jonathan Lethem
Lost Cause by John Wilson
The Merry Wives of Windsor by William Shakespeare
The Celestial Instructi0n by Grady Ward
The Russia House by John le Carré
Mood Indigo by Boris Vian
A Series of Unfortunate Events: The Ersatz Elevator by Lemony Snicket
Something rotten by Jasper Fforde
Give Me Desire (Reason Series) by Derrick, Zoey