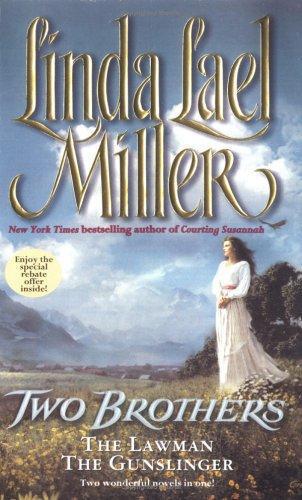 The Lawman
The Gunslinger

An Original Publication of POCKET BOOKS

LILY AND THE MAJOR

EMMA AND THE OUTLAW

CAROLINE AND THE RAIDER

TWO BROTHERS: THE LAWMAN & THE GUNSLINGER

AND DON’T MISS HER NEXT GLORIOUS NOVEL

For years, bestselling author Linda Lael Miller has delighted readers with her passionate, evocative stories of life and love in the Old West. Now, with this innovative pair of novels, she creates two gripping stories of identical twin brothers, separated at birth, but drawn to each other’s side….

Marshal Shay McQuillan has a lot on his hands—stagecoach robbers to hunt down, a murdered fiancée to avenge. He certainly doesn’t need an identical twin brother he never knew existed turning up out of the blue and telling him what to do. Even less does he want pretty Aislinn Lethaby trying to rescue
him
from danger. Because, to tell the truth, Aislinn is a sweet distraction from duty whom Shay just can’t resist.

Aislinn Lethaby has a fine job at the town hotel. Soon, she’ll have saved enough to buy the broken-down homestead she has her eye on and bring her young brothers west. She has no business jeopardizing everything when she sees Shay in danger. But something about the man makes Aislinn lose all the good sense she thought she had—and follow the longings of her heart.

LINDA LAEL MILLER has written more than twenty-three novels, including the
New York Times
bestsellers
Princess Annie, The Legacy, Yankee Wife
, and
Daniel’s Bride
. With more than six million copies of her books in print, she is considered to be one of the finest romance authors writing today. Ms. Miller resides in the Seattle area, where she is at work on her next novel for Pocket Books.

For orders other than by individual consumers, Pocket Books grants a discount on the purchase of
10 or more
copies of single titles for special markets or premium use. For further details, please write to the Vice-President of Special Markets, Pocket Books, 1633 Broadway, New York, NY 10019-6785, 8th Floor.

POCKET and colophon are registered trademarks of Simon & Schuster Inc.

For Peggy Jean Knight, who introduced me to a whole new world and a lot of great people, most especially, herself. Keep on talkin’ to strangers, girl.

I have neglected this journal sorely, since leaving home. I shall try to do better, for no doubt I will find it interesting in future years.

September is upon us already, and I fear I shall not be able to ride one more day in that wagon without going mad from the jostling. Surely it is a marvel that I have not given birth before my time; I am enormous and unwieldy, like a corn-fed sow in autumn, and from earliest light until sunset, we roll onward, ever onward, over rutted tracks, uphill and down.

Surely it is impossible that a mere four months have passed since we left St. Louis, Patrick and I, our hearts full of hope and wonder, our foolish heads brimming with glorious visions of adventure. It seems ever so much longer, looking back. So many rivers crossed.

In those first joyous nights, we slept beneath our rig on the feather mattress that was our marriage gift from Patrick’s grandmother, God rest her soul, and chattered on and on about the grand homestead we would have in the West. Three hundred and twenty rich and fertile acres, ours for the taking!

We have no living kin save each other, but it didn’t matter so much then, for we had set our faces toward the Promised Land, and we could already taste the milk and honey. Patrick would ofttimes lay a hand on my belly, there beneath our
creaky old wagon, and say we were a family, he and I and the babe. That together we were more than enough.

I love him so much.

I shall never tell him, of course, how I wish with all my will and spirit that we had never left Ohio, that we had made a life for ourselves there, on the little farm where Patrick was born. Instead, we sold our land and bought this accursed wagon, these plodding, sweaty oxen, and more dried beans and hardtack than any mortal should ever be required to eat.

Some families have turned back—three at the first river crossing, two more when smoke signals appeared on the far horizon. We lost four to cholera, and were forced to leave the Flynns and the Lingwoods to fend for themselves when the sickness overtook them as well. The wagon master said we were losing too much time, that we must put the high country behind us before the snows came and, anyway, we could not risk an epidemic. Whole trains had been lost that way, he said.

Still, Ellen Lingwood was my friend. I shall never forget the despair in her eyes when we abandoned her with her sick husband and four feverish little children, there beside the trail, as if they had no more value than the discarded pipe organs and china cabinets and cedar chests we come across on occasion.

I confess I fear that fate more than anything, even the red savages who occasionally watch us from a distance, spears in hand, their painted ponies restless, eager to give chase. More, in fact, than death itself. To be alone, surrounded by all this vast and uncaring emptiness—I can hardly bear to contemplate it.

Patrick says cavalrymen patrol these parts, that I mustn’t fret, for the Lingwoods will surely be found and taken in, as will the Flynns. We have not seen a single soldier since we passed through Kansas; perhaps he thinks I haven’t noticed. This land belongs to the Indians, and rightly so, and were it up to me I should let them have it for all of time and eternity!

I will set aside my writing, for now, although it comforts me mightily. I must conserve my ink, for I have only this one bottle, now partly gone.

Three days have passed since my last entry. We are climbing, climbing, higher and higher into the mountains. Sometimes the wagon is at such an angle that I can barely hold my seat at the reins, and our belongings slide and clatter behind me. Twice I have had to beg Patrick to climb up and drive, for I am too fearful. In the steep places, though, where the track is narrow, he must walk alongside the oxen, murmuring to them, guiding them, lest they panic and lose their footing.

How I thank God when eventide comes, and we can stop and take our rest! Patrick must hoist me down from the wagon seat now, for I am ever so great and awkward. Mrs. Chambers says my babe has dropped, that I will surely enter my confinement soon.

I am so afraid. We cannot stop, and unless my pains come in the evening, I shall have to bear my child in that infernal wagon. Mrs. Chambers says I am not to fret, for she has had experience in such matters, and will take me in charge and see us both safely through the ordeal. And an ordeal it is; other women have borne children during our passage west, and their shrieks of pain reached every ear, though most pretended not to hear. Some were hearty, and came through gamely, but others were buried beside the trail, with their infants cradled in their arms.

Patrick says it will be over quickly, and I will have a fine son or daughter to show for my travail. Love him though I do, I confess that sometimes I want very much to strangle him.

There are two babes inside me, I am sure of it. They are making war, one against the other, like Cain and Abel. When I told Patrick I thought I was carrying twins, expecting husbandly sympathy, he beamed and said God had blessed us.

I wonder if he would think that if he were the one facing the valley of the shadow, not once, but twice.

Perhaps I should have been a spinster.

There is a great storm brewing—the sky has been ominously dark for days—but the summit is not far off, and the wagon master has been pushing us all to our limits, haranguing the stragglers. Patrick is grim-faced with the tension of it, and he thinks of little but driving the oxen to the verge of collapse. They bellow in protest, poor, wretched beasts, their hides lathered and steaming; no doubt they yearn for the quiet fields of home, and I feel great pity for them. At midafternoon yesterday, the Swannells’ mules simply gave out. They lay down and would not rise and go on no matter how strong the urging.

The sight disturbed me prodigiously; I scrambled down from the wagon, though it was moving still to retch in the bushes. I expected kindly words from Patrick; instead, he was impatient with me for causing a delay. My dearest husband, who has never spoken harshly in my presence in all the time I’ve known him, growled at me like a bear. (Of course he later apologized, as well he should have done.) It makes me sore fearful to know he is so worried; I am still smarting a little and will take my time letting him know that I’ve forgiven him.

Love for Lydia by H.E. Bates
On the Blue Comet by Rosemary Wells
Apeshit by Carlton Mellick, Iii
When He Cheatin' and You Still Love Him by Cachet
Bon Marche by Chet Hagan
Celestine by Gillian Tindall
Money & Love Don't Mix by Ace Gucciano
Amid the Shadows by Michael C. Grumley
Dunc and Amos Go to the Dogs by Gary Paulsen
Hunter's Fall by Shiloh Walker