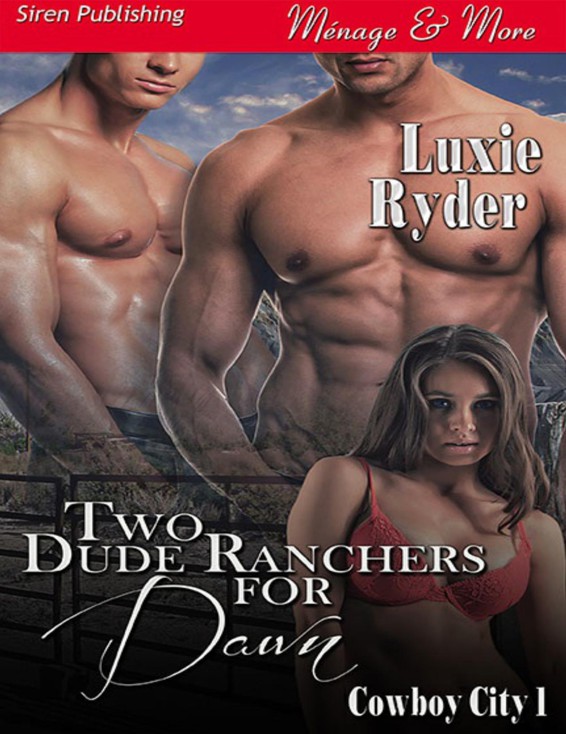 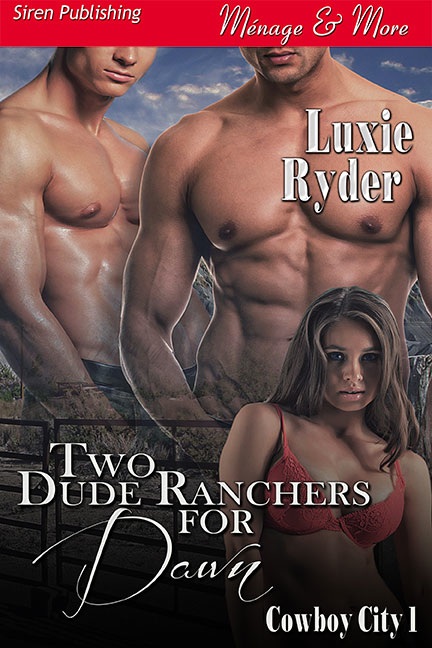 The cruel irony of being single and surrounded by gorgeous, but totally gay, cowboys at a dude ranch in Arizona isn't lost on Dawn.

Two handsome cowboys introduce themselves just after she arrives and Dawn is flustered by the attention, until she remembers they can't really be interested in her. But when she dances with the men at a party later that night, she is stunned to discover that the attraction is mutual.

Ben is initially rattled by his lover Garrett's obvious attraction to the woman but soon finds himself just as fascinated by her. Garrett resists at first but eventually agrees that they should ask her out on a date.

The intense sexual chemistry between her and the men scares Dawn and she refuses their offer, but when she finds herself alone with them later beneath a breathtaking sunset, she can fight the attraction no longer.

ABOUT THE E-BOOK YOU HAVE PURCHASED:
Your non-refundable purchase of this

e-book allows you to only ONE LEGAL copy for your own personal reading on your own personal computer or device.
You do not have resell or distribution rights without the prior
written permission of both the publisher and the copyright owner of this book.
This book cannot be copied in any format, sold, or otherwise transferred from your computer to another through upload to a file sharing peer to peer program, for free or for a fee, or as a prize in any contest. Such action is illegal and in violation of the U.S. Copyright Law. Distribution of this e-book, in whole or in part, online, offline, in print or in any way or any other method currently known or yet to be invented, is forbidden. If you do not want this book anymore, you must delete it from your computer.

If you find a SirenBookStrand e-book being sold or shared illegally, please let us know at
[email protected]

If you have purchased this copy of
Two Dude Ranchers for Dawn
by Luxie Ryder from BookStrand.com or its official distributors, thank you. Also, thank you for not sharing your copy of this book.

Dawn Jeffries dragged her large pink suitcase across the uneven ground leading to the door of the log cabin, wincing as the wheels scraped across the jagged boulders and rocks studding the dry, dusty earth. A couple of the cowboys she could see dotted around the area watched her struggling with her cases, all of them either leaning against or sitting on the wooden railings at the entrance to the ranch.

She sent Jeanette another mental poke for bringing her here.

The idea of a bachelorette party in a dude ranch in Pinal County, Arizona, had seemed like a wildly exciting idea at first, but Dawn was beginning to have doubts as her group left the Phoenix airport and the urban streets and buildings had given way to miles and miles of nothing but gray dust and thousands of cacti. She felt a bit better when the relentless open space gave way to a valley where the desert met the mountains and the landscape turned a little more green and lush.

“I thought cowboys were supposed to be gentlemen,” she muttered toward the group of friends a few feet away who were also struggling with their luggage, swallowing a groan as she twisted her ankle when the heel of her shoe caught on a stone.

Dawn span toward the source of the voice, squinting against the bright afternoon sun as she bent her neck back as far as it would go to look up at the tall man who had suddenly appeared beside her.

“Can we help you with those?” another voice behind her asked. Dawn got a little dizzy when she had to turn around again and look up at yet another cowboy, almost as tall as the first, who seemed to have appeared out of nowhere.

She felt her cheeks grow even hotter than they already were. New York got warm in the summer at times, but nothing like this. Dawn hoped the handsome men staring down at her with wide, friendly smiles splitting their broad, tanned faces couldn’t see the sheen of sweat she could feel tingling on her skin.

Dawn followed the pair as they each grabbed one of her bags and strode over in the direction of the cabin she’d pointed out to them. She smoothed down her dress and fluffed up her highlighted brown hair, embarrassed that she’d been caught looking so unkempt by two of the hottest men she’d ever laid eyes on, but then she remembered that it probably didn’t matter.

Cowboy City was the number one venue for bachelorette parties and mixed groups of people who wanted to experience life on a dude ranch with a little bit of fantasy thrown in. It offered not only the usual activities like horseback riding, hayrides, and nature trails, but other events such as theme nights at the onsite nightclub and male strip shows at some of the small town’s bars. The men Dawn had seen in the pages of the glossy brochure Jeanette had shown her a few months ago were the stuff fantasies were made of. All of them were handsome and very,
very
rugged, and all of them were most likely gay.

The brochure had gone to great lengths to make it clear that Cowboy City was a LGBT-friendly ranch in an easygoing town that welcomed adult visitors and groups from all over the world, gay or straight. A quick glance at some of the rave reviews for the ranch on the internet from the hordes of women and gay men who’d visited in recent years made it clear that the majority of the ranch hands working at the venue were totally hot, endlessly charming, and almost exclusively gay.

The cruel irony of being a thirty-year-old single woman attending her best friend’s bachelorette party in a place filled with beautiful men she would never be able to have wasn’t lost on Dawn.

Her attention locked on to the long, loose stride of the taller of the cowboys carrying her bags. His jeans were well-worn and dusty and hung low on his hips, emphasizing the sway of his firm ass as he crossed the yard. Dawn swallowed hard, resisting the urge to let out a groan of frustrated appreciation.

Dawn’s gaze flicked upward to lock with a pair of dark green eyes filled with humor.
Yep, he
caught me looking at his butt
. There was no doubt about it. His face gave nothing away as he took her other bag from his friend and briefly stepped inside her cabin to place the luggage on the floor. He moved away and gestured for her to enter, quickly tipping his hat to her and revealing a mass of fine dark hair.

She fumbled in her purse to find some money to tip them with but the slightly shorter, blonder cowboy held up his hand, and some of the warmth dimmed in his hazel eyes. “No need for that, Ma’am.

We just wanted to help, that’s all.”

The guys gave her a friendly nod then turned and walked away, leaving her feeling a little awkward. She hadn’t meant to offend them. How was she to know they were just being helpful?

Dawn moved to close the door, but the sound of a familiar laugh filtered through to her, and as she stepped outside she realized she’d totally forgotten her friends. She found them standing outside of their rooms, each of them flanked by more than one cowboy. Dawn craned her neck to see, pretty sure that she counted three guys swarming around Julie, each of them falling over the other to help her. Sally was giggling with nerves and looking flustered as a pair of cowboys opened her door and handed over her bags. Even Ruth’s natural cynicism seemed to have taken a much-needed break as she rewarded each of the two guys helping her with a dazzling smile, her gaze filled with a little bit of gratitude and a whole lot of flirtation.

The bride-to-be, Jeanette, didn’t seem to be enjoying the attention of the guys helping her as much as her friends, and Dawn had a feeling that she knew the reason why. Jen’s fiancé, Alan, wasn’t exactly the mellow type, and she was stressed out from the almost-constant phone calls he’d subjected her to since she left him at JFK Airport earlier that morning. His jealousy and insecurity were the reason Jen had chosen Cowboy City for the week-long trip. A ranch full of gay men was probably all the competition Alan’s precious little ego could handle. The jerk probably took some perverse kind of pleasure in knowing that Jen’s single friends had zero chance of meeting anyone. Dawn knew he didn’t like Jen’s friends or the influence he imagined they had on her. She wondered if her lifelong friendship with Jeanette would survive her marrying Alan. If he had his way, it sure as hell wouldn’t.