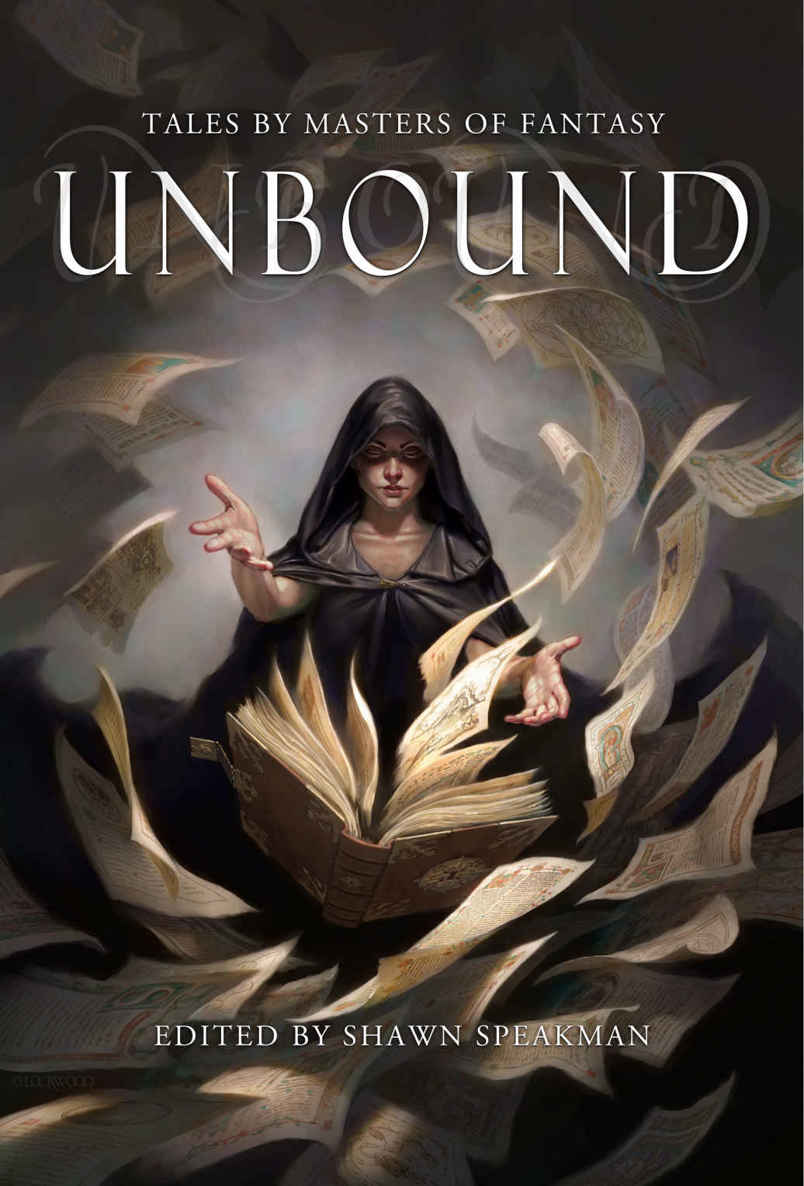 UNBOUND
Tales by Masters of Fantasy
EDITED BY
Shawn Speakman

Unbound
is a work of fiction. All of the characters, organizations,

and events portrayed in these stories are either products of the

authors’ imaginations or are used fictitiously.

For those who enter the realms of imagination
And who find it hard to leave
“I propose to speak about fairy-stories, though
I am aware that this is a rash adventure.”
—J.R.R. Tolkien
“I’m staying here to read: life’s too short.”
—Carlos Ruiz Zafón
Contents
Introduction: A Geek Trying to Do Good
Madwalls
by Rachel Caine ■
Stories Are Gods
by Peter Orullian ■
River and Echo
by John Marco ■
A Dichotomy of Paradigms
by Mary Robinette Kowal ■
Son of Crimea
by Jason M. Hough ■
An Unfortunate Influx of Filipians
by Terry Brooks ■
The Way into Oblivion
by Harry Connolly ■
Uncharming
by Delilah S. Dawson ■
A Good Name
by Mark Lawrence ■
All in a Night’s Work
by David Anthony Durham ■
Seven Tongues
by Tim Marquitz ■
Fiber

by Seanan McGuire ■
The Hall of the Diamond Queen
by Anthony Ryan ■
The Farmboy Prince
by Brian Staveley ■
Heart’s Desire
by Kat Richardson ■
The Game
by Michael J. Sullivan ■
The Ethical Heresy
by Sam Sykes ■
Small Kindnesses
by Joe Abercrombie ■
The Rat
by Mazarkis Williams ■
The Siege of Tilpur
by Brian McClellan ■
Mr. Island
by Kristen Britain ■
Jury Duty
by Jim Butcher ■
The Dead’s Revenant
by Shawn Speakman ■
Introduction:
A GEEK TRYING TO DO GOOD

When I published
Unfettered
, I had one goal in mind: end the outrageous medical debt that had accumulated from treating my Hodgkin’s lymphoma.

I did not do this alone. Two dozen of my friends came to my aid, donating short stories and artwork to produce
Unfettered
, a genre anthology featuring short stories by some of the finest writers working today. It sold unbelievably well and helped introduce many readers to new authors they otherwise would not have tried.

Once all the bills were settled and I was healthy again, I had a serious question to answer, though.

Should I continue Grim Oak Press?

The answer did not come to me immediately. I started the press to take care of my medical debt. We succeeded with that. Originally, I had no desire to continue it afterward. Owning a publishing house is hard work—quite possibly the hardest job in the entire industry—and I didn’t want to see that work overshadow my own writing goals.

But upon reflection, I decided not using the platform that
Unfettered
created would be irresponsible. As Patrick Rothfuss is fond of saying, it is imperative—if nothing else—to make the world a better place than when we entered it. I fully believe that. And with Grim Oak Press, I think I can do that very thing.

Unbound
is the beginning of an answer to my question. It is another unique anthology similar in scope to
Unfettered
. It features talented authors doing what they do best, and every one of them exceeded my expectations. And just like the first anthology,
Unbound
has no theme; the contributors were allowed to submit any genre tale they desired.

The result? An amazing collection.
Unbound
is sure to keep you reading when you open it right from the first, the stories as diverse as they are extraordinary. Jim Butcher sends Harry Dresden to jury duty. Rachel Caine creates mad walls in the Citadel. Terry Brooks revisits Landover, where Ben Holiday must deal with the worst threat ever—G’home Gnomes! Mary Robinette Kowal visits the stars with a reluctant painter. Mark Lawrence returns to his
Broken Empire
setting to reveal a Brother’s name. And so many more stories. I enjoyed every tale in
Unbound
. I think you will too.

I published
The Dark Thorn
to learn how to publish
Unfettered
.
Unbound
in turn will give me the leverage and resources to publish
Unfettered II
, with all proceeds of that anthology going to alleviate medical debt for authors and artists who find themselves in the same situation I was in. This is the way I can pay forward the aid I received; this is the way I can do my part to begin making the world a better place.

I hope you enjoy
Unbound
. I hope you review it and share it with your friends and family.

It is the beginning of something far greater than myself.

On her sixteenth birthday, Samarjit Cole was taken to the Citadel to meet the captive. She wasn't expected to start her turn of duty yet, but it was necessary, her father said, to see it for herself, and to know what she would be facing when she did take up the role of Watcher.

"Did you read everything?" he asked her in the car on the way there. She pulled her long black hair back behind her ears and made a sound that could have gone either way. She'd read it. Twice. She just didn't like being questioned. "Because, I can't stress this enough, he'll play with your mind. You have to be prepared. You have to know the rules backwards and forwards. It's important, Sammy."

"What are you doing?"

She didn't look up from her tablet. "Explaining to my friends why I'm being dragged off for the whole weekend."

"I'm not telling them the truth, Dad. God. I'm not
stupid
." She sounded sullen and bitter, but she didn't feel that way. It was just a cover, because Sammy Cole was scared. Scared to the point that her fingertips were cold and clumsy when she tried to type out messages, and she finally gave it up and clicked off.

Being offline felt like being naked. Alone. She turned her head out toward the world, away from her father, because she knew he might figure out how she felt. "Where are we?"

He glanced over at her. Her father was a large man, imposing even in regular clothes, but today he wore a full dark-blue
chola
instead of his usual casual clothes, and a
dastar
turban to match, which was really not his usual style. The
chola
was reserved for special occasions. His long beard reached to the lower part of the steering wheel, and it was still mostly dark, with a few gray streaks in it. As always, Samarjit felt a conflicted surge inside when she looked at him; she loved her father, knew him for a good and kind and upright man, but she also wished . . . wished he wasn't so
practicing.
Her mother, Marta, was German and hardly ever thought about her Protestant church upbringing. It was her dad's calm, quiet, everyday faith that had driven them apart, or at least that was how Marta told it.

Sammy's father didn't say much about it at all. He said nothing but kind words about her mom, and although she knew he wished his daughter would embrace the Sikh faith and wear the
bana
, she couldn't see herself doing it. She respected him for following his own principles, though. In these times, when it seemed like having skin anything but the color of bleached porcelain prequalified you as terrorist, being a practicing Sikh was even harder than before.

This Connection of Everyone with Lungs by Spahr, Juliana
The Spanish Armada by Robert Hutchinson
One Of Our Dinosaurs Is Missing by David Forrest
The Moon King by Siobhán Parkinson
Roadkill by Rob Thurman
The Crow King's Wife by Melissa Myers
El amanecer de una nueva Era by Jean Rabe
Kahleena MacCarthy ~ To Meet a Highlander by Zarik
Darwin Expedition by Diane Tullson
Scent of Darkness by Christina Dodd