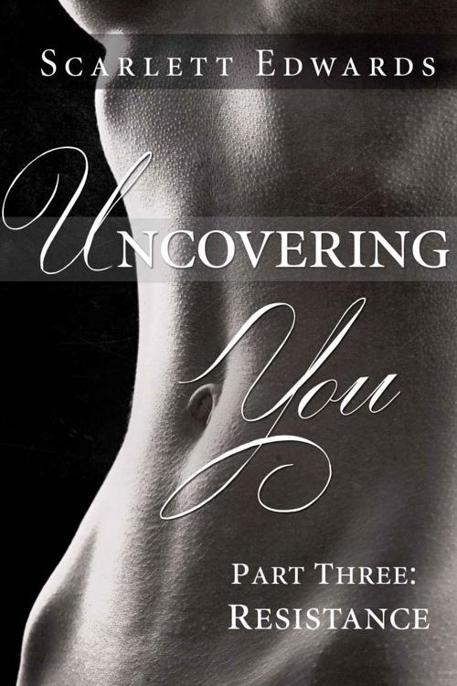 This book is a work of fiction. All names, characters, locations, and incidents are products of the author’s imagination, or have been use fictitiously. Any resemblance to actual persons living or dead, locales, or events is entirely coincidental.

The uploading, scanning, and distribution of this book in any form or by any means---including but not limited to electronic, mechanical, photocopying, recording, or otherwise---without the permission of the copyright holder is illegal and punishable by law. Please purchase only authorized editions of this work, and do not participate in or encourage electronic piracy of copyrighted materials. Your support of the author’s work is appreciated.

I will never give in. I will never yield. No matter what he subjects me to, I will always fight. I will not forget my resolve.

I will never give him that.

Uncovering You 3: Resistance
contains scenes of intense emotional and physical abuse. Readers with sensitivity to such subjects are advised to proceed with caution.

The story of
Uncovering You
unfolds over multiple volumes of approximately 125 pages each. Each volume is a fully-contained book with a climax and conclusion.

Books in the
Uncovering You
series will be released every 20 days. Here is the anticipated schedule:

Uncovering You 1: The Contract

I want it known in writing that I have the best readers in the world.

Thank you, for all your support. This story would not and
could not
continue without you.

That is how long I’ve been trapped on this bed.

Three days of being a prisoner on a mattress.

I can almost say that I preferred the floor. At least that way, I had the ability to move. I could stand, walk, stretch my legs.

Now, all that is gone.

I’m frightened of going over the edge. I remember the red, pulsing ring that Stonehart showed me when I awoke here. It cut over the four corners of the bed.

When I sleep, I curl up in a tight ball in the middle. I try not to move.

I’ve started having nightmares. All of them revolve around
him
. But in my dreams, I cannot see his face. It is cloaked in deep shadows.

All I see is the shining light reflecting off his dark, cruel eyes. Watching me. Always, watching me.

Those are the dreams I wake from screaming. More often than not, I’m tangled in my bed sheets and drenched in sweat. My heart is always pounding when I awake. My first terrifying thought is that I’ve thrashed over the boundary.

That hasn’t happened yet. Thank God. But I’ve come close.

On the second night, I awoke with my face inches away from the edge. I froze as soon as I saw how close I’d come to activating the collar.

I remember the adrenaline that shot through my body when I realized that I had almost triggered it.

I haven’t seen Stonehart since he brought me here. I haven’t had any communications from him, either. No notes. No messages.

Rose has been absent as well.

I don’t know how long Stonehart intends to keep me on the bed. My only solace is that the blinds are not closed. I haven’t been left in the dark. During the day, sunshine floods my room. At night, stars twinkle against the dark sea outside.

But not today. A storm is raging out there. Heavy clouds hide the sun. Rain pounds against the enormous windows.

I’ve never seen the ocean this angry. Massive waves crash into the cliffs below me. Though I can’t see the shoreline, sometimes I imagine I can feel the vibrations they send through the house.

Each day, I’ve woken to a small, wheeled tray of food by my bed. It’s always accompanied by a clean chamber pot. Provisions are not as bad as they were before I signed the contract.

But, that’s not to say they don’t leave me wanting.

It might be just my imagination, but every day, the food cart seems to appear just a little farther from me. Today, I had to hook it with my foot to roll it closer. I almost knocked it farther away by accident.

I know now there are cameras all around the sunroom. I can’t see them. But I know they’re there all the same, hidden in the crevices of the ceiling.

I don’t know how much longer I’ll be here.

There’s also the sense of injustice. It’s a ridiculous sentiment to hold. I would be an idiot to expect
justice
from Stonehart. But the feeling of injustice is there, nonetheless.

I didn’t break his rules. I shouldn’t be trapped here.

The promise of continuous freedoms granted by the Tokens of Good Behavior is the only thing sustaining me right now. Stonehart said that TGBs cannot be taken away. I’ve saved up enough to be allowed into the rest of the house.

Of course, I had to go and screw things up my first day.

I still don’t know what possessed me to think it was a good idea to go sneaking around his bedroom. Worse than that, I
hated
the guilt that I felt when Stonehart discovered me there. I felt like I had done something wrong. My guilt made it impossible to think clearly. Couple that with the surprise I felt when I found him standing there—he was supposed to be away! Add to that the fear clenching my insides, and you have the makings of a disastrous situation.

The worst was my reaction. I
acted
guilty because I thought he’d caught me in his office. He said something along the same lines: that since I
thought
I had broken his rules, I should be punished as if I actually
had
.

I must have replayed my last interaction with him a hundred times in my mind. I’d let my fear of punishment overwhelm me when I was with him. I acted like a frightened, little girl.

It made things worse.

What I should have done, what it would have been smart to do, is to stand up to him. I remember the moment we shared in the elevator before this whole nightmare began. Or at least, before I
knew
it had begun.

I’m sure I was already his target.

He told me to impress him. He wanted me for… what did he say it was? For my
mind
. He asked me what I thought of his decision to take Stonehart Industries public.

At that point, I’d bungled my disastrous first impression so badly that I thought I had nothing to lose. I stood straight, looked him in the eyes, and told him boldly—exactly—what I thought.

I remember his reaction. He appreciated my honesty. Moreover, I think, he liked the fact that I’d stood up for myself. I wasn’t simpering before him like his company’s board of directors.

I sit straight up in bed, gripped by the revelation.
Could that be it?
Could he
want
me to act bold and defiant? He told me to kick, to fight, to struggle… He said that it turns him on.

Is that who he wants me to be? The woman who can challenge him without breaking down?

He wants me defiant, confident, and strong.

No wonder he told me the story about him growing up. He warned me of the danger of what I was doing. I thought I could trick him by acting broken. I thought that’s what I would need to do to get him to underestimate me and lower his guard.

But that behavior had the exact opposite effect. It made him suspicious. It did not jive with what he knew about me.

Stonehart told me how he developed a taste for vengeance. He said he could see that trait in others.

In short, he was warning me that he could see through my act.

I have to remember that he is a ruthless businessman. He could not have risen to the top if he was not cold and calculating. Stonehart Industries would not be one of the most powerful private corporations in America if it were run by a man who could not read, understand, and manipulate people.

That
must be the real reason he’s punishing me now. Hell, he might even be a man of his word. He told me his rules:

“Rule One.” Stonehart’s voice is sharp and clipped. “If you resist, or don’t comply with a clause set out in the contract, you will suffer the consequence of misbehavior.” His intonation makes the labeling sound extremely ominous.

“Rule Two. You are explicitly prohibited from any form of self-harm. I will not have you—” he sneers at me, “—spoiling yourself.”

“Three. You are not allowed to question my desires. Questions pertaining to your situation are prohibited.” He kneels in front of me and I catch a whiff of his cologne. To think that it once functioned as an aphrodisiac is insane.

“Rule Four,” Stonehart continues, pacing the room with his hands behind his back. “I am a busy man. I will not always have time for you. However, you have no responsibilities other than pleasing me. I expect you to always be ready for me.”

He stops and looks into my eyes. “Do you understand? The time I make for you is a privilege. Treat it as such. Dress and act accordingly.”

Those were his rules. He said if I broke them, he would leave me in the dark.

Well, I didn’t break any of his rules. And he didn’t leave me in the dark. I may be trapped on the small island of this bed, but I am definitely not in the dark.

I have to stand up to him. Given my current situation, that is a terrifying proposition. But I have to choose the lesser of two evils. Either I keep trying to be meek, as per my original plan, and hope he underestimates me… or, I can find my old backbone and act like the woman I truly am.

I thought he wanted to see me broken. But if Stonehart is as shrewd as I think he is—no, as shrewd as I
know
he is—then he’s already seen through the act. The right thing for me to do—the only chance I really have—is to be myself.

The only way I’m going to get anywhere is if I start acting like the person I am, instead of the person I think he wants me to be.