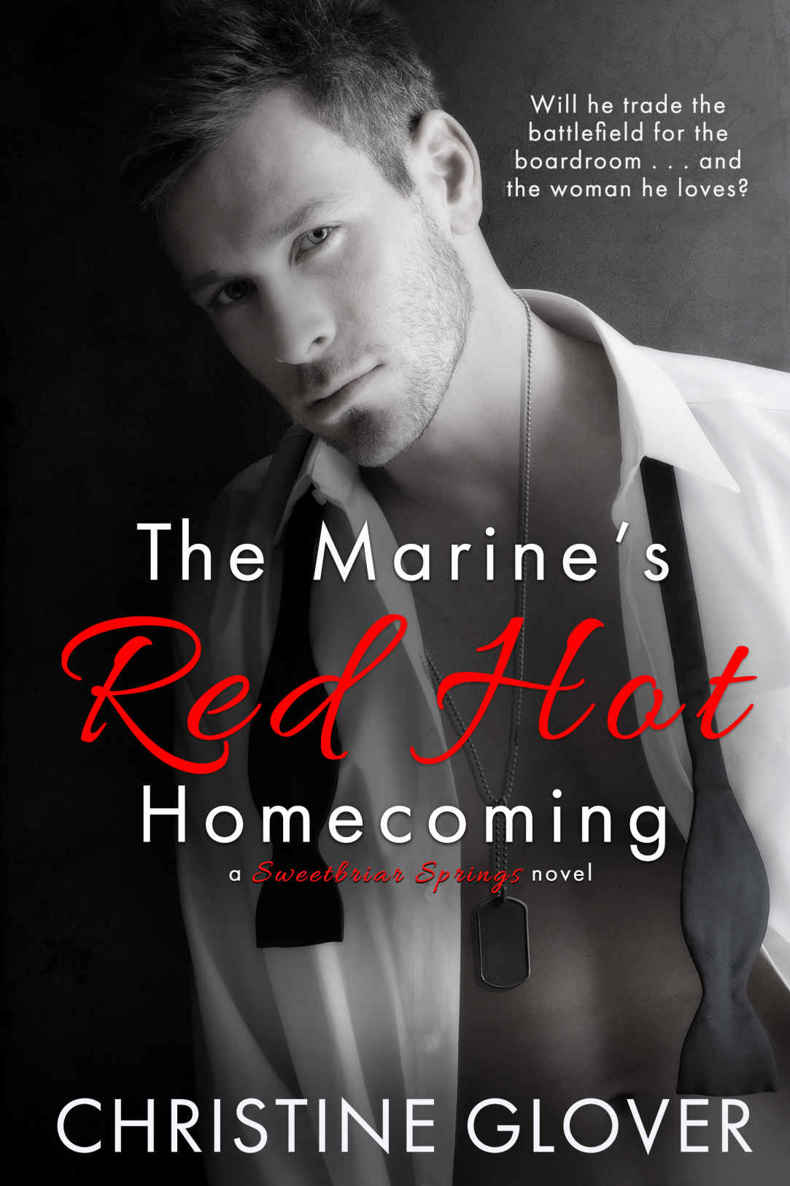 This book is a work of fiction. All names, characters, places and incidents are a product of the author’s imagination or are used fictitiously. Any resemblance to locales, or persons living or dead, is coincidental.

All rights reserved, including the right to reproduce, distribute, and transmit in any form or by any means. For information about subsidiary rights contact the author via her website.

Discover all of Christine’s future releases by signing up for her
newsletter
.

Dedicated to my YMCA Tribe of Friends! You make me smile every day, and you make sure I don’t just sit in a room, in a chair, by myself all day long!!

Hannah Sullivan crossed her boutique’s refinished hardwood floor and climbed her two-step stool. She reorganized the product display shelf, but concentrating on her work seemed impossible. Her stomach contracted and her chest squeezed tight.
Caleb’s back. It’s only a matter of time before he shows up here.
By now he’d have read all the letters and emails she’d sent overseas while he’d been on his third tour of duty for a covert Marine mission. She understood the military’s strict rules against contacting spouses in deep cover—protecting the troops meant not compromising their positions. That had priority over everything. She’d known plenty of military wives who had delivered babies without their husbands by their sides.

A one night stand two weeks before Caleb officially accepted his orders and shipped out gave Hannah zero rights. Not even when she’d ended up pregnant, and alone.

Only his father’s stroke had the power to bring him home. Then the Red Cross contacted Caleb’s commanding officer and he’d been brought in from the field. Her sister Jessie, a former Marine herself, had explained what would happen from that point. He’d go through all of his correspondence while shuttling back to the states.

Jitters trembled beneath her skin while she repositioned her lotions and creams. Instead of Caleb’s father coming over to discuss the historic district’s grand reopening in four weeks, she’d be dealing with Caleb who had returned state side to take temporary control as CEO over Gibson Technologies. But she doubted that their first meeting would cover the finer details of the big project.

Nope. She had already acquired the necessary documentation to add his name to their son’s birth certificate. He’d know everything by now, though he hadn’t made any effort to contact her even when given the chance after being recalled from his mission.

That burned a hole in her gut more than she wanted to admit. But she’d made it clear two years ago that she had no intention of being involved with a military man again. Not after what had happened with her ex boyfriend. War had changed Brandon into someone she couldn’t save. Finally, she had to save herself.

Herhands trembled and a bottle of Sunflower Sensation body spray tipped. She hurried to right it, then accidentally knocked over three others. “Dang it,” she said. “Get a grip.” Still, a world of worry fluttered in her belly, making it difficult to concentrate. Nothing, not even her shop’s scents of lavender and jasmine, soothed the tension bubbling beneath the surface of her skin. Nor could anything hush the thrum of anticipation playing havoc with her senses.

Outside she heard the familiar sounds and smells of the historic shopping district coming to life. Car horns beeped, and the swish-swash of the baker next door sweeping the sidewalk mingled with the ongoing daily clatter of construction.

The distinctive roar of a V-rod Harley cut through the noise with the precision of a scalpel. Hannah’s heart rate accelerated and adrenaline pinpricked the tips of her fingers. Through her store’s front window, she caught sight of the motorcycle pulling into a parking spot.

The driver silenced the engine and removed his helmet. Every fiber of her being zipped into overdrive. Caleb’s eyes, blue as the color of the night sky just after the last rays of sun disappeared beyond the horizon, scanned the street before he swung off his seat. Mid-morning spring sunshine painted streaks of gold in his short-cropped hair as he rounded the back and opened a satchel to retrieve a round cylinder. The movement stretched his black leather jacket taut across his broad shoulders.

Hannah’s long lost inner vixen, which had been buried under mounds of laundry and midnight feedings, suddenly resurrected with a high kick to the solar plexus. And her hormones sang with a hallelujah chorus that made every woman part she possessed buzz with awareness.

Not good. Not good at all.
She pushed down her spiraling desire with reality. What had happened between them had been a one night aberration during which she’d tried to convince him that he should stay in Sweetbriar Springs and claim his birthright. But his anger toward his father—born out of once again discovering another mistress in his father’s life—had propelled Caleb to leave.

Nothing she’d said then had made a difference. Not even after she’d shared what had happened with Brandon. Caleb had left the next day. Not that she regretted the outcome. Of all the mistakes she’d made during her life, she would never count Jason as one. He was her world. She’d do anything to protect her little boy.

Now Caleb walked toward the store’s door and she stood, transfixed, on her stool. Within moments, the welcome-inside bell chimed and he stepped into Harmony Landing.

He locked eyes with hers. All the harmony in her boutique evacuated the building.

He waited for several long, tense beats of silence. “Where’s my son?” he asked.

Her stomach nosedived to the floor, then bounced back into her throat. Though she hadn’t expected him to be
Mr. Oh I’m So Sorry I Missed the Birth Announcement
, Hannah had hoped for a gentler, kinder, maybe even a bit of a tender reaction. Clearly, her feelings still weren’t important to him.

No way would she let him know she had harbored a secret hope for more in one unprotected corner of her heart. “He’s at the park with his babysitter. Which is a good thing,” she injected a cool tone into her voice. “Otherwise you would have scared the shit out of him.”

A muscle twitched in his jaw, much to her satisfaction. “I came to see him as soon as I settled things with my father’s board of directors. We’re dealing with a takeover bid, but I’ve got that business temporarily squared away,” he said, crossing the floor to stand at the foot of her stool. “Now I can focus on making things right for Jason.”

Grateful for the advantage of the stool’s height, she looked down at Caleb. “For how long?” Because he’d never wanted to take the helm of his father’s vast conglomerate of business interests. Instead he’d opted to join the Marine Corps to serve his country. Whenever he returned to Sweetbriar Springs he had chosen to work for his cousin Kennedy, deliberately avoiding any contact with his father, Steven.

“For as long as it takes.” He opened the cylinder and withdrew a ream of papers. “I’ve got a marriage license and pre-nup drawn up. My lawyer’s arranged all the details. We can be married in less than a week.” He spoke in clipped tones, matter-of-factly and without a hint of emotion as he held the paperwork out.

The room seemed to spin in slow motion. Of all the things she’d expected him to offer her and Jason, marriage hadn’t been on her radar. Not when he knew that she never wanted to be with another military man again. She’d only contacted him after their falling out because he’d a right to know about his son. Hannah held the shelf next to her to steady herself before stepping off the stool to stand toe-to-toe with him.

“Gee, thanks for the proposal,” she said. “But I’m not in the market for a husband, especially not one who risks his neck.”

He narrowed his eyes. “Jason needs to know who his father is—according to your letters that guy is me.”

“I agree he needs to know his father. Whenever you’re here, that is. I’ve got the necessary paperwork ready for you to sign so you can be added to the birth certificate. Then we’ll set up a legal shared custody plan.” She inhaled a deep breath to calm her racing thoughts. “Plus, when I get married I’d like a husband who loves me.”

“Your duty is to your country. Something we argued about two years ago,” she said. “I want nothing to do with a military man after what happened with my ex boyfriend. I thought I could change your mind about leaving me when you learned about what happened. After all, we’d known each other since we were kids. I thought that would make a difference, but you’re no different than Brandon.”

“Maybe not, but you know what happens when two people get married for the sake of a child.” She held his gaze. “Your father has never forgiven your mother for getting pregnant with you. That’s why he treated you so harshly, and the reason you refuse to accept what is rightfully yours.”

“There’s no way I want to take one step in that bastard’s footsteps. The only reason I’m here is to keep Gibson Technologies going for my family until he recuperates.”

“Once again proving my point that marriage is not an option for us.” Hannah folded her arms. “Your heart is with the Marines, not here.”

“Other military families make it through the ups and downs of serving their country.”

Once she would’ve screamed a great big yes to the dress and all the sexy possibilities that came with Caleb as the groom, but now she had to stand her ground. Not just for her little boy’s sake, but for her own as well. Because this time two hearts were on the line and she wouldn’t put either of them into emotional harm’s way. “Brandon’s post traumatic stress disorder almost destroyed me. I’ve watched other military family’s fall apart after the big welcome home from war reunion sours. That’s exactly why I won’t marry you.”

Pain pinged in Caleb’s temples and stabbed the back of his neck. Everything he’d been sucking back for over a week, all the self-recriminations and regret about not knowing he had a son, made his head ache.

He refused to take no for an answer. Not until he’d exhausted every avenue. “I can give you and Jason everything you need—a comfortable life, financial freedom, a home.” He wasn’t anything like her ex boyfriend. But proving that would be harder than he’d anticipated.

Her eyes widened slightly at his words, and her cheeks flushed bright red. “I’ve already provided him with those things.” She waved her hand to indicate the room. “Plus, you’re not going to stay here after your father’s back on his feet. He’s the reason you left the last time. Nothing I said or did stopped you from signing up again for a dangerous, covert mission because you were too angry to listen to me.”

He’d almost forgotten how pretty Hannah was when she was flustered, or aroused. His mouth suddenly went dry. “Look. I’m trying to make up for not being here when he was born—for missing out on being there for him while I was overseas.” He glanced around the tiny space and back at her. “I can give you so much more if you’ll let me in.”

The Trail Back by Ashley Malkin
Beach House No. 9 by Ridgway, Christie
The Forging of the Dragon (Wizard and Dragon Book 1) by Robert Don Hughes
Hunger by Michael Grant
Quarry's Deal by Max Allan Collins
Greek Billionaire's Forbidden Lover (The Rosso Family Series Book 2) by Leslie North
The Eye of the Sibyl and Other Classic Strories by Philip K. Dick
Marian's Christmas Wish by Carla Kelly
The Disappearance of Ember Crow by Ambelin Kwaymullina
Walk on Water by Laura Peyton Roberts